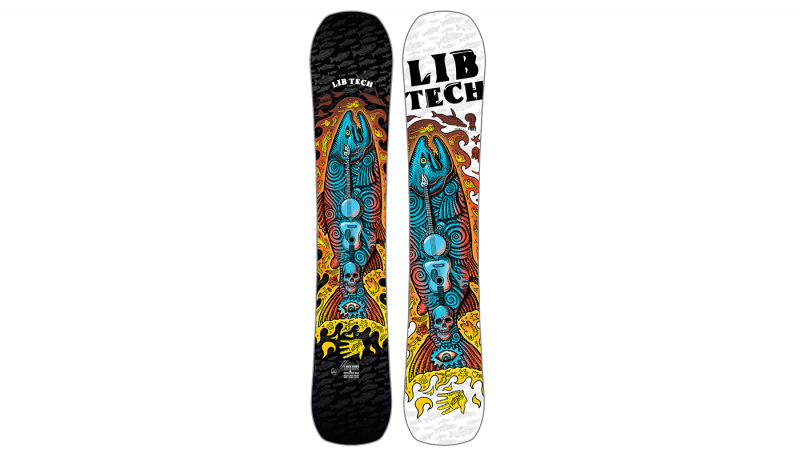 THE VERDICT
The Lib Tech EJack Knife is built for going big and pushing your limits. Eric Jackson’s pro model, who often goes by “EJack” — thus the name of the model — loves steep fall lines and launching off side hits, lips, and drops. And if you go from powder to chunder, no problem: the EJack Knife can handle it if you can.
FULL REVIEW

The company behind Lib Tech, Mervin Manufacturing, is responsible for the reverse camber revolution that kicked off in 2006. But Mervin is best known for the wavy edges that they call Magne-Traction introduced in 2002. Since then, the company has been at the forefront of board design that brings together camber and reverse camber. The EJack features a mild reverse camber between the feet and serious camber underfoot that’s known as C3 and one of the most popular camber profiles in the industry for serious riders.

As a brand, Mervin is known for long relationships with their athletes, like Jamie Lynn, Mark Landvik, and Travis Rice. Built domestically with environmentally friendly practices, Mervin regularly refines their manufacturing process with the earth in mind. Apologies if this sounds like a love-fest, but with their commitment to their athletes, progressive designs, and enviro-friendly designs, Lib Tech is tough not to love.

With aggressive camber and the nose and tail, this directional twin loves to turn. And turn a lot. The faster, the better. The reverse camber keeps the ride manageable.

The EJack Knife includes three types of wood in the core that combines with the aggro camber in the tail to deliver a lot of pop. This core also helps maintain power from turn to turn.

As the name suggests, the EJack Knife is a Swiss Army knife. It’s great for all mountain, side country, and backcountry. Slightly less stiff than some other pro models in the Lib Tech line-up, the board slices and dices all of the mountain. With a tapered tail and wide nose, this is a great choice for riders who get plenty of pow, but don’t want a pow-specific deck.

Lib Tech has been leading the charge in green manufacturing in snowboarding for at least a decade. Their bio-plastics are made from castor beans instead of petroleum. They also use soy-based sidewalls as well as renewable forest products for cores. Built in Washington, they have a low carbon footprint when it comes to delivering boards to North American customers: no overseas shipping required.

And the craftsmanship is top notch. The oldest boards in our quiver are Mervin made. Although they’re dinged and feature a few base shots, they’re still performing. Lib Tech boards don’t have full-wrap edges, something some critics believe to make the board less durable. But, no one told our rock board that.

Continue Reading
WHERE TO BUY
MSRP
$599.95
BEST DEAL
$479.95
*Your purchase helps to support the work of Gear Institute.
HOW WE TESTED