You’ll choose this boot because it’s spacious and comfortable for out-all-day missions, and it handles all-mountain terrain elegantly, not aggressively. Whether you’re skinning in the backcountry or hoofing it across the parking lot, you’ll appreciate the range of motion and walk-ability.

The Minaret 100 (and its sister boot, the Minaret 80, a slightly softer flex) first came out in fall 2014, as K2’s first women’s freeride boots. K2 is relatively new to the boot game, but they’re learning quickly and the Minaret is as versatile and friendly as boots come. The 100-flex shell felt a little weak when really driving a turn, but if you’re just out for a cruise, it’ll hold up fine. The boot excels at mellower speeds and the 100-millimeter last is plenty roomy for wider feet.

The boot felt light on the walk to the chairlift—having three buckles instead of four cuts weight—and the walk mode was easy to switch while on the move. With the tech binding compatibility (a hard-to-find feature in women’s freeride boots) K2’s Minaret 100 is truly a touring boot that shines at the resort.

The Minaret comes stocked with Intuition liners, which can be heat molded for a precise and custom fit. But they felt warm and snug even without bootfitting. The liners also come with Tour Flex Notches, which means they have hinge points at the ankle for added mobility. In other words, these boots feel like sneakers when walking.

If you’re not into girly graphics, you may not be thrilled with the purple and black color scheme. And if you’re looking for an assertively stiff boot, this isn’t it. But otherwise, these boots are flawless. 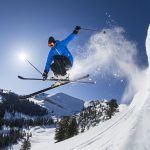