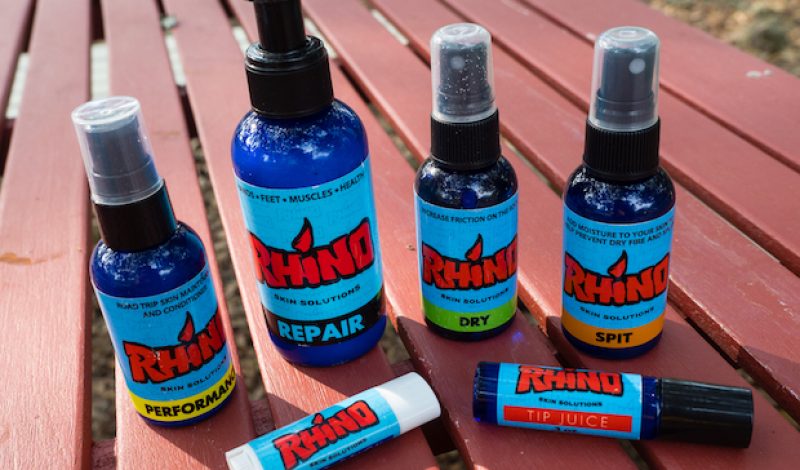 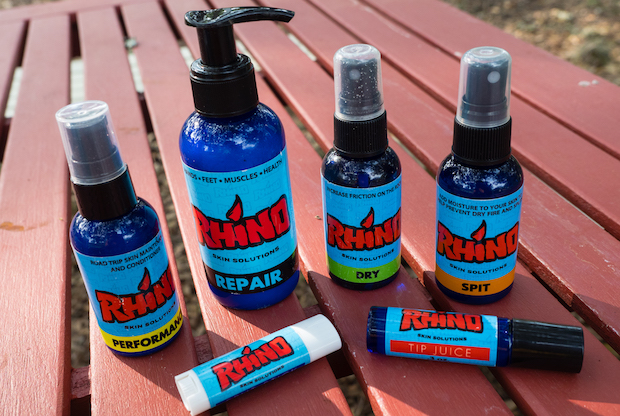 It is common for skin deterioration to end a climbing day early or force a rest day. Muscles may be willing, the mind strong, but splits, thinning pads and flappers have stopped the mightiest in their tracks. Consistent training and successful redpoints are dependent on healthy skin, and Rhino Skin Solutions makes intelligent products with purposeful ingredients to keep hands in climbing condition.

The first product tested, and the one I used the most, was the Rhino Skin Solutions Repair cream. Unlike other post-climbing skin products, this cream absorbed quickly and didn’t leave a greasy film. Other popular post-climbing products like Climb On! Bar and Joshua Tree Healing Salve require waiting with idle hands until the product is completely absorbed. The label recommended application directly after climbing (once hands were clean) and again before bedtime. Rhino Skin’s Repair contains grape seed oil to hydrate the skin, but the real magic was the salicylic acid; it loosened the protein structure of the outer layer of skin, which allowed the new layer to emerge. Shredded skin often looked new by morning. Tea tree oil, thyme, and rosemary provided antimicrobial properties for an effective healing environment, and menthol soothed post climbing skin pain. Dimethicone helped hold moisture in the skin. Repair became a go-to anytime my skin took a beating from either climbing or working. 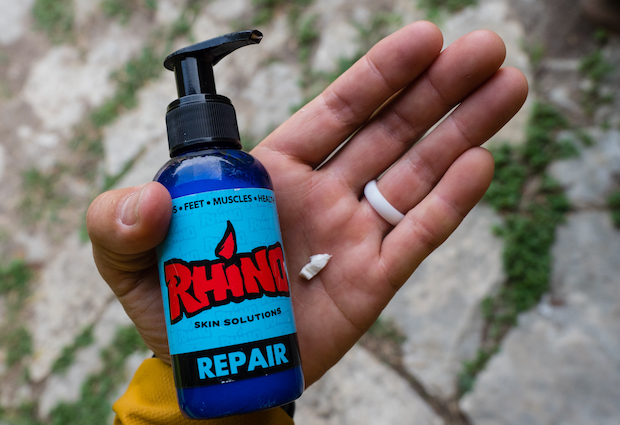 Rhino Skin Solutions Performance cream is a blend of non-aluminum antiperspirant and moisturizers. It prevented sweaty hands and kept skin healthy and pliable. Methenamine was the key; it formed natural protein plugs that blocked the sweat ducts. Applied 2-8 hours before climbing, it noticeably decreased sweating by the hands and fingers, valuable for the humid conditions of my home crag in Texas. The effect was also cumulative—the more days I used it in a row, the stronger the antiperspirant effect. Stearic acid acted as an emulsifier and skin conditioner and dimethicone sealed in the moisture. It was recommended to stop use after seven days, which allowed the skin to naturally regain fluids through sweat.

Rhino Skin Solutions Dry was a more aggressive aluminum-free antiperspirant for those with extremely sweaty hands. This liquid contained the methenamine but lacked any moisturizing agents. The Performance took care of my hands (along with climbing chalk) no matter how hot it got, but my feet sweated like no other. My wet feet have been a big issue in the mountains and led to shredded skin and frighteningly cold toes. I used Dry spray to combat these issues during training for an upcoming alpine trip, and it has worked as advertised; I was excited to have a solution to my long-standing problem in the mountains. The Dry, like most of Rhino Skin Solution’s products, contained magnesium, which was readily absorbed through the skin and is said to promote connective tissue health.

The methenamine in Rhino Skin Solutions Performance and Dry was the same active ingredient as Antihydral, which has been used by climbers to combat sweaty digits. Antihydral was extremely aggressive, and often caused more problems than it solved; deep splits, cracked creases and glassy fingertips often resulted from the high amount of methenamine in the product. Rhino Skin Solutions reduced the concentration to better suit climbers’ hands. 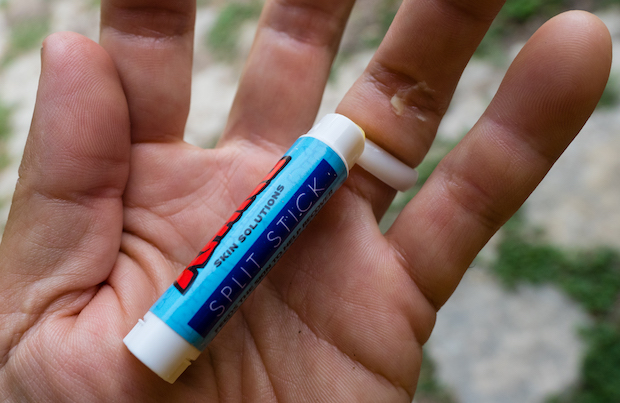 On the opposite side of the spectrum, Rhino Skin Solutions Spit resolved overly dry and glassy skin, which caused “dry firing” off of holds. Dry skin wasn’t an issue for me except at the end of many consecutive indoor training sessions, when habitual chalk use, fans, and air conditioning rid my skin of all moisture. After a few dry fires off my home gym holds, I tried the encapsulated water solution, and indeed, the Spit temporarily re-established moisture and conformity to my fingertips. Organic aloe, water, lemon juice, honey, lavender, sunflower lecithin and xanthan gum are the ingredients to their newest addition to their line. 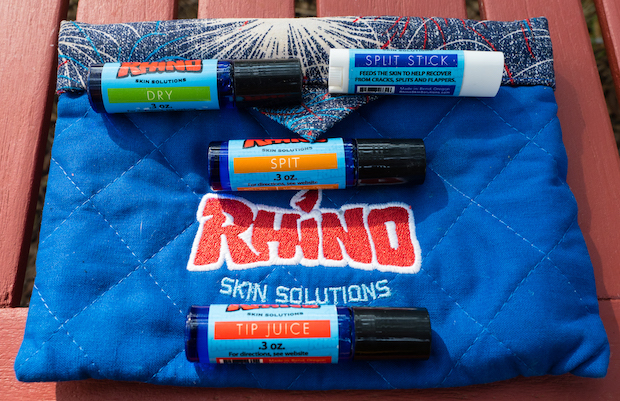 Rhino Skin Solutions also offers Mikey’s Tip Juice, an extreme aluminum-free antiperspirant, only for use on the fingertips and only by experts, as misuse can be damaging. Rarely recommended, it is an aloe based roll-on that is 33 percent stronger than Dry — roughly the same strength as Antihydral.

rhinoskinsolutions.com | MSRP from $3.75 to $42 for single items