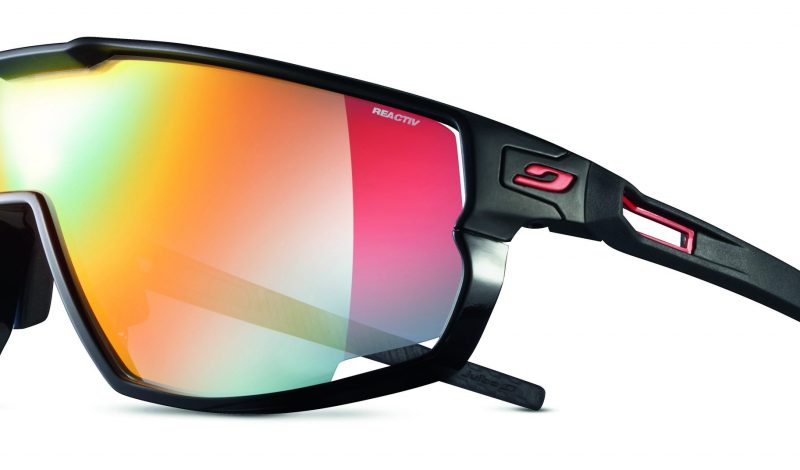 French eyewear brand Julbo, which launched in 1888 and produced the first glacier glasses in 1950, is a sparsely known brand in the United States. They have cultivated a secure connection to the mountain sports, and in America, alpine climbing and mountaineering guides have held the brand in high regard.

But Julbo also produces sunglasses for other outdoor endeavors, releasing models suitable for running, cycling, triathlon, and other sports demanding eye protection in 2000.

Julbo released a performance model with broader and more comprehensive lens coverage dubbed the Rush in February, and we’ve been testing a sample pair with Reactiv photochromic lenses for two weeks for this First Look.

The first thing to disclose is that I’m Asian; brands have specific versions of performance glasses dubbed Asian Fit, but the ad copy for the Rush says all versions are Asian Fit. Typically, the bottom of the frame or lens in non-Asian fit glasses will hit my cheekbones, and the bridge will slide down my nose, compounding the issue. Asian fit glasses from other brands usually have built up nose pieces to push the lenses away and up.

The Rush was the first sports glasses with a deep lens, Asian fit or not, that didn’t touch my cheekbones. The 3D Nose Fit nose pads adjusted in every direction, solving the common issue of them being too broad and too close to the frame. Manipulating the nose piece produced the clearance required, and the Flex 3 Temples have a metal core, which allowed almost infinite customization.

After just a few minutes of fiddling with all the adjustable features on the Rush, I felt like I had a perfect fit. I tried the glasses with several versions of POC helmets, with no interference on any of them.

The test sample of the Rush came outfitted with a photochromic Reactiv lens that changes from Category 1 to Category 3 (17% – 75% visible light transmission, $230 MSRP), and this change is independent of air temperature. The bottom and top outside corners of each lens have a cutout for venting.

The Rush comes with a semi-rigid case and microfiber bag.

I used the Julbo Rush for alpine climbing training, using them while fastpacking or doing hill repeats with a load for three weeks. I appreciated the large coverage area while bushwhacking through unforgiving trees and brush.

I also was amazed at the ability of the Reactiv lens to adjust to a hue that worked better than other photochromic lenses in the shade. I usually struggle when the sun is shining, but the trees partially shade the ground; the contrasting light and dark produced by bright sunlight filtering through branches still challenging, but the Reactiv lens stood above others in this performance characteristic.

Emerging into bright sunlight, the lens adjusted quickly to a shade that compared to other photochromic lenses in my quiver produced a more vivid visual effect, maintaining acuity of smaller features of both trail and fauna, without drowning out the contrast.

I will surely appreciate the Reactiv lens when I return to mountain biking after recovering from wrist surgery. The shade to light transitions under the trees commonly causes me to feather the brakes, but I think the Reactiv lens will allow me to carry more speed. And direct sunlight in central Texas means hardpacked and dry trail surfaces, and the brighter filtering of the Reactiv lenses will allow better judgment of available traction.

The wide Reactiv lens was distortion-free, even at the edges.

On several humid days with cooler temperatures, the venting of the Rush was put to extreme challenges. Even on the hill repeats, the Reactiv lens never fogged up, which was surprising to me, given the large coverage area.

I did notice the heavier weight of the Rush compared to smaller, partially rimless, and more minimal sports glasses, but the mass brings much more coverage area and protection. And unlike some of my rimless glasses, I didn’t feel like I had to baby the Rush frames; they feel stout all around and suffered zero damage during the testing period, even with my usual careless treatment.

Also, compared to more minimal sports glasses, I noticed the frame blocked more of my peripheral vision. The lateral edges and the hinge area are a little bulky compared to some rimless glasses; it was nothing that detracted from performance. But it may prove to be more of a factor when I return to mountain biking.

But for improved coverage and protection, I am fully willing to accept these minor dings. The Rush provided the most coverage than any glasses I have used that haven’t rested on my cheekbones. And when the heat is on here in Texas, that is a big deal, as I sweat accumulate behind the lens, which has forced me to take the glasses off to clear the moisture.

The included case was a disappointment; at the MSRP of the Rush with the mirrored Reactiv lens, I w a more expected a more robust case to toss into my pack. The Rush is a keeper for me, but I will get a hard case for them.

For those desiring extensive coverage and have struggled with other photochromic lenses, the Julbo Rush is worth serious consideration. I am a lens snob, and the Reactiv lens impressed me in challenging conditions. And compared to partially rimless designs, the Rush felt sturdy.