Can you ride a bike to the South Pole?

You’ve gotta give Eric Larsen credit for taking the snowbiking trend to its logical extreme.

In 2009, on his “Save the Poles” expedition, Larsen became the first person to complete the journey to the North & South Poles and the summit of Everest in a single 365-day span. On December 20th Larsen set out to attempt another world’s first – a bicycle journey to the South Pole.

After flying to Union Glacier, Antarctica via Punta Arenas – Larsen set off by bicycle at Hercules Inlet. He traveled south for 10 days on a Surly Moonlander with 5-inch tires and carried gear, food and fuel in custom designed Granite Gear panniers. Larsen knows Antarctica well, having traveled there many times before on skis, and knew what he was in for. Ultimately, the crevasses, whiteouts, sastrugi (ridges formed on the snow surface by wind erosion), winds and soft snow patches that caused countless wipeouts turned him around. 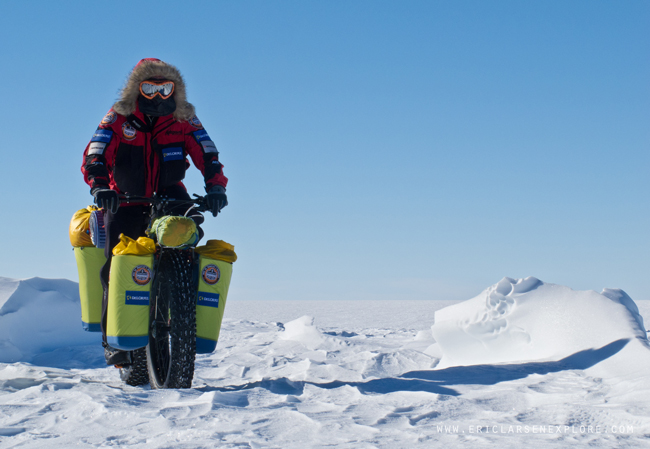 Larsen on his Surley Moonlander – courtesy of ericlarsenexplore.com

Regardless of whether he made the trip to the pole – biking in Antarctica, for Larsen, was a way to demonstrate how people can use bicycles to improve their lives, protect our environment and fight Parkinson’s disease. On what must have been one of the most difficult days of the expedition, the one on which he decided to turn back, he had remarkable perspective noting:

But at least I CAN turn around. My dad and all the other people suffering with Parkinson’s Disease have no other choice but to continue forward day after day, year after year. – ericlarsenexplore.com

In the weeks he spent in Antarctica, using an ipad mini, Iridium Access Point, and Iridium 9555 satellite phone, Larsen posted updates on his blog from the frozen continent. His account of spending strenuous days biking and nights in his “Hilleberg hotel” was a fascinating and emotional journey that provided an insightful account from the field. In one post, he highlighted some of the gear he relied on and the hour-long process of setting up camp:

The process goes like this: put on my Bergans down jacket and Ergodyne big gloves, set up the Hilleberg hotel, shovel snow on the snow flaps, make a snow wall (if its windy), dig a trench for the Moonlander, set up the GoalZero gear, bring all my gear into the tent, make snow blocks for melting, set up the MSR stove… Ad Infinitum. – ericlarsenexplore.com

He also described the difficult decision on day 10 of the journey to turn back for Hercules Inlet:

I realized that due to an increased amount of climbing, headwinds, and consequently sastrugi and drifts, my daily mileage would realistically be closer to 10 nautical miles per day. At that rate, my chances of making the pole before my food ran out (as well as the end of the season) would be zero – odds that would basically mean a costly extraction by ALE somewhere before the pole. – ericlarsenexplore.com 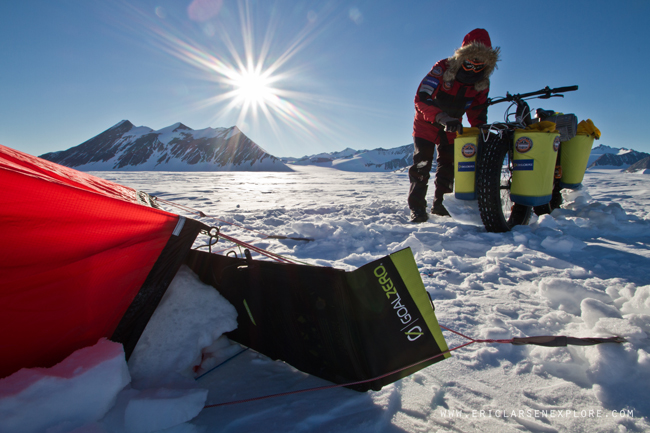 Larsen and his Bicycle – courtesy of ericlarsenexplore.com

Following along through his blog posts and audio updates was a unique way to get a glimpse of what it was like to be pedaling a bike surrounded by only vast fields of snow, 24 hours of daylight and no people for hundreds of miles. It was clear to anyone following the feed that while Eric is a tenacious explorer, he is also a deliberate one. His decisions were based on years of experience, solid data provided by his gps equipment and support team and the knowledge that his wife and new-born baby, Merritt, were waiting for him at home.

The courage it took to set out on a journey with so many constantly changing variables is a testament to Eric’s spirit of adventure and his commitment to raising awareness for both cycling as a way to improve our world and to fight Parkinson’s disease.

To read more about Larsen’s adventures, or learn more about how bicycles can change the world, visit ericlarsenexplore.com. 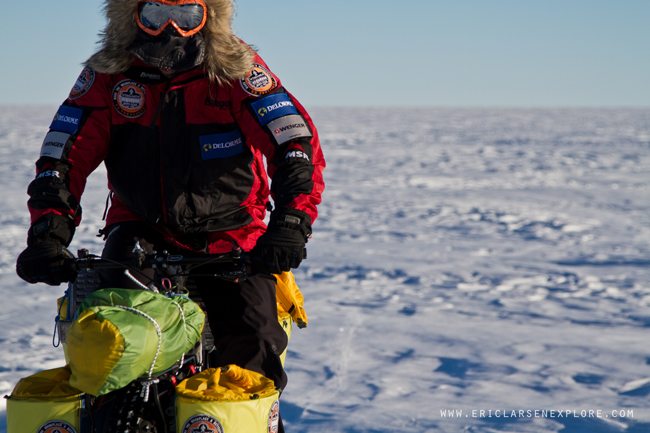