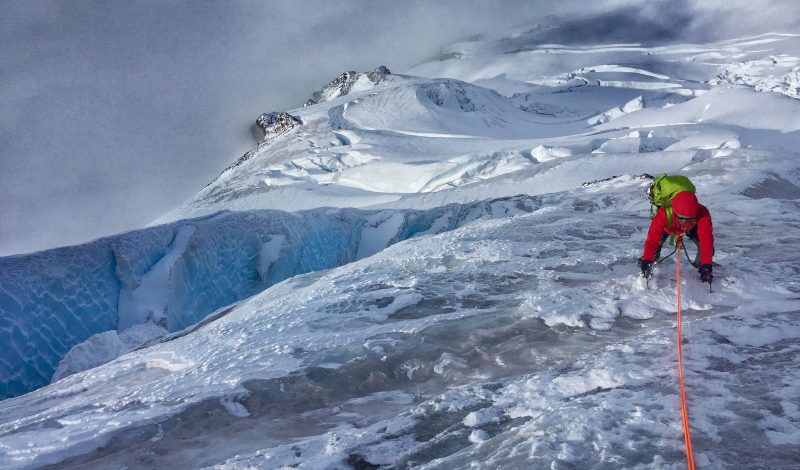 We tested alpine climbing gear during a five-day adventure in the North Cascades.

After 100+ days of no precipitation, the North Cascades received over three feet of snow in a late-season storm that corresponded with our planned excursion into the backcountry. Careful analysis by my partner Mark Allen, IFMGA guide, and owner of Mountain Bureau, LLC,  formed a plan around a potential high-pressure system, to attempt a climb Mount Baker. We settled on an ascent via the North Ridge, carrying over to descend the Coleman-Deming route, in a five-day, four-night trek that included ice climbing and crevasse rescue training.

The fresh snowpack and cold temperatures that followed the storm, combined with the humid conditions typical of the North Cascades, made the choices in the sleeping system critical. 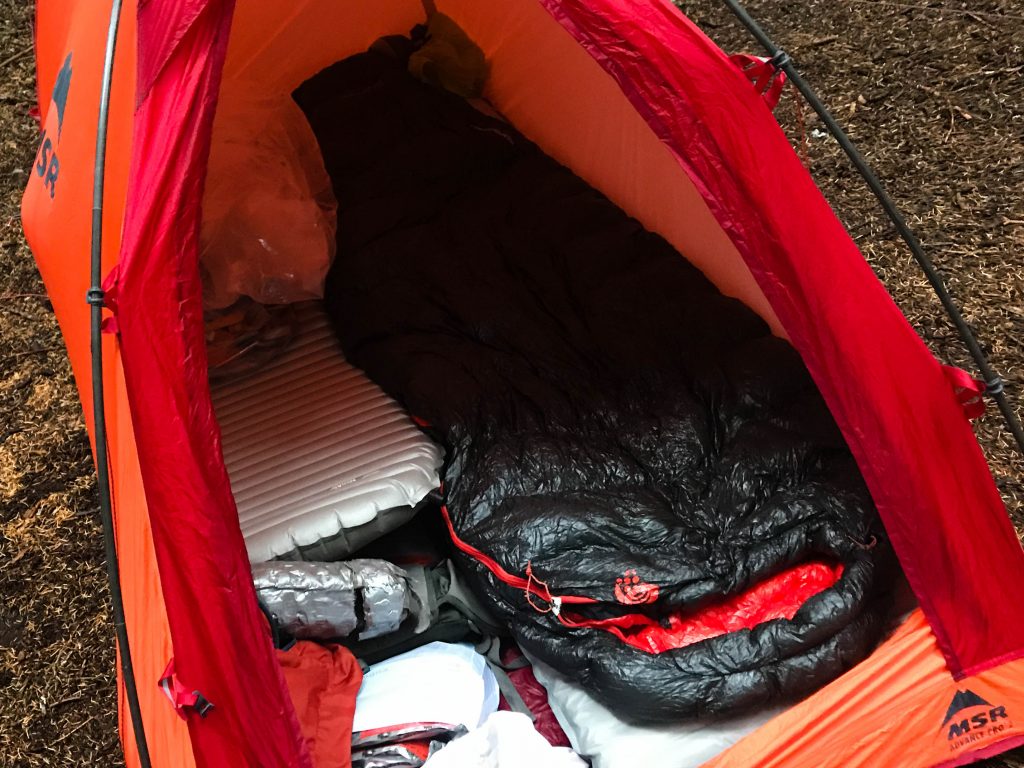 The Mountain Hardwear Ghost Whisperer 20 sleeping bag tipped our scale at 1 pound, 10 ounces (regular length), the scant weight was welcomed since we carried everything over the summit. The fluorine-free, RDS certified Q.Shield 900 fill power down’s six inches of loft kept me warm on all four nights of the climb which dipped into the 20s. The Whisperer 10 denier fabric’s DWR coating and Q.Shield water-resistant down kept the insulating value intact even though humidity in the tent was high; condensation drips were a normal occurrence.  The three-quarter length zipper had a unique wide zipper pull that was the first truly “snag resistant” zipper I have used, that common middle of the night frustration was eradicated.  The tiny packed size (down to 6″ x 10″ in a compression sack) was also appreciated when it was time to move on. mountainhardwear.com, MSRP $580, available February 2018 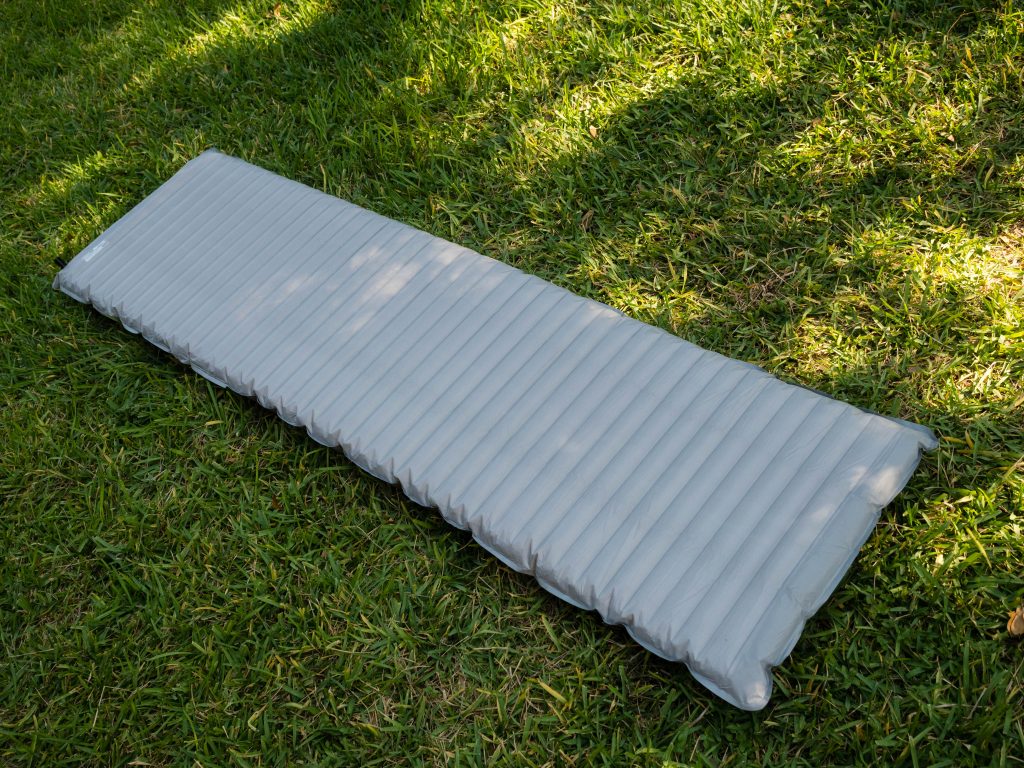 I chose the Therm-A-Rest NeoAir Xtherm Max as my insulation from the snow and to provide comfort for restorative sleep and rest. The total package of stuff sack, inflator sack (used to prevent moisture from accumulating inside the pad) and pad tipped the scales at 1 pound, 3.3 ounces (regular length). The rectangular shape of the Max version added jostling area and warmth compared to the mummy shaped “normal” Xtherm model. The multiple ThermaCapture reflective layers halted the seeping cold with minimal bulk and the textured surface limited bag slip when tent site wasn’t perfectly flat. Therm-A-Rest has reduced the familiar crinkly sound of NeoAir mattresses, but it was still noticeable. thermarest.com,  MSRP $200

Our chosen North Ridge carry over route and training itinerary involved five days of hauling loads up and over the summit; backpack choice was key; I sought an ideal compromise between comfort and weight, choosing the Gregory Alpinisto 50. The verified weight of the large size was 3 pounds, 11 ounces. Lighter packs existed, but I wanted to carry efficiency and valued comfort, and the FusionFlex suspension did an admirable job of transferring the considerable pack weight (due to food) to the hips without interfering with ice climbing movement required on multiple ice pitches up high. The Fusion Flex suspension combined a 7001 aluminum perimeter frame, perforated HDPE frame sheet, thermoformed back panel, and high cut, dual-density hip belt for both load transfer and mobility.  Climbing friendly features such as a crampon pocket, hip belt gear loop, full access side zipper, removable lid/suspension components and holsters compatible with all axes were appreciated as well. The durable 630 D pack emerged with nothing but soiling from dirt and mud from the lower elevations of the journey. gregory.com, MSRP $240

The North Ridge of Mount Baker is known partially because of the ice pitches guarding the summit. The extended dry spell before the storm doubled the ice climbing, any remaining snow had ample opportunity to be scoured off and provided little adhesion for fresh snow. The the most difficult pitch was vertical at WI4, and combined with the heavier packs required for the carryover, made crampon performance decisive, and the Black Diamond Equipment Snaggletooth crampons didn’t disappoint. The aptly named fully automatic crampons had a large primary, offset, horizontal monopoint paired with a smaller, offset horizontal secondary point. I found this configuration more natural to use than equal length dual front points; it allowed a more instinctual use of the big toe as the focal point and offered more options in foot angles. The stainless steel construction proved extremely durable, resisted snowballing, defended against rusting and resisted all forms of abuse. The Snaggletooths were in constant use starting on the toe of the Coleman Glacier, navigating through many rocky couloirs, neve and ice up higher. The crampons then suffered through rock-strewn snowy ridges and unconsolidated snow descending from the summit; they weren’t removed until the last two hours of the entire climb and showed no damage. The micro-adjustable heel bail allowed precise tension to be dialed in and the dual density ABS plates kept snow build up at bay. The Snaggletooth crampons had a verified weight of 1 pound, 15.9 ounces for the pair. blackdiamondequipment.com, MSRP $220 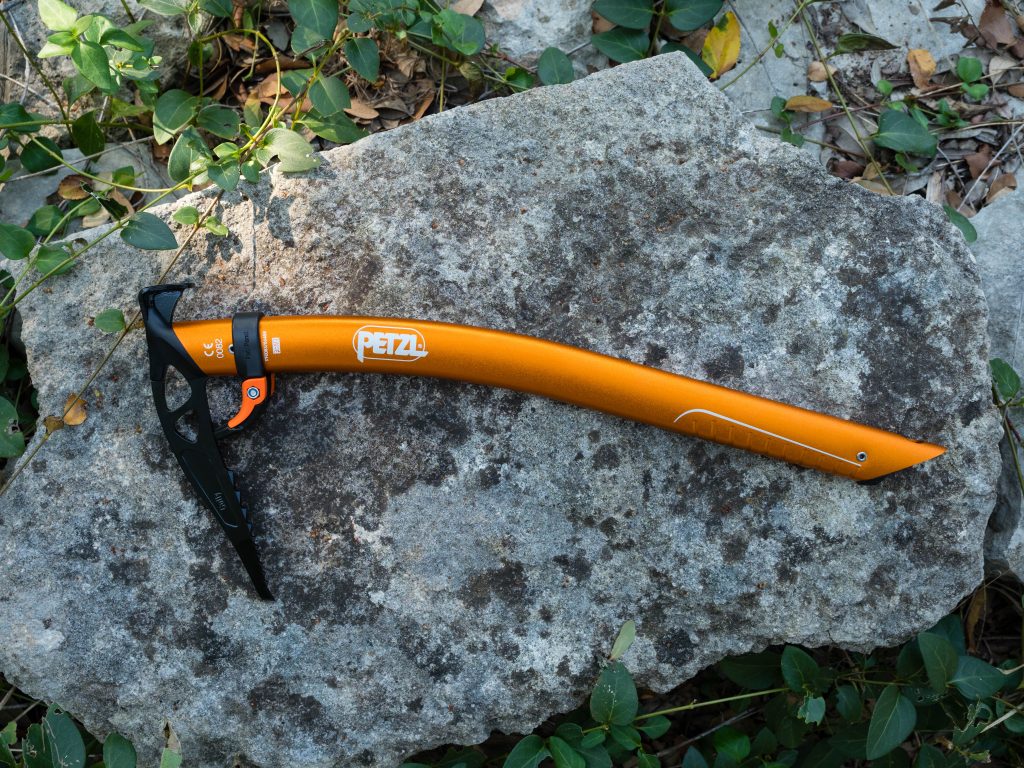 The ice pitches also mandated carrying a second tool, and I chose the ultralight Petzl Gully. At a verified weight of only 10 ounces, this 45 cm tool didn’t weigh me down on the parts of the route that mandated a single axe. The pick tapered 3 mm and required some muscle to plant due to the minimal swing weight (head weights are available), but it penetrated old, hard ice and was easy to remove.  I preferred to carry dual hammers, and the Gully’s hammer was minimal but workable. The adjustable Trigrest hand rest proved valuable, especially when wearing thick gloves; it allowed a more relaxed grip and provided a more secure feeling. The beveled spike worked well while also being safer for storage inside packs and bags. petzl.com, MSRP $150