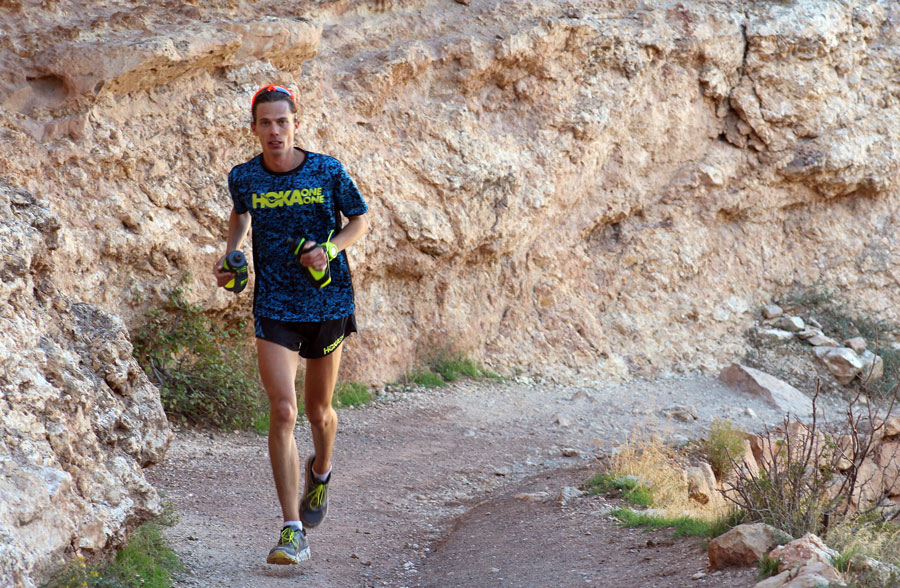 Jim Walmsley made waves in the trail- and ultra-running world this month by completing the iconic Grand Canyon Rim-to-Rim-to-Rim route in 5:55:20, taking more than 26 minutes off the previous record.

R2R2R is not a race – it’s just a challenging and popular route for runners (and hikers and backpackers) in Arizona’s contribution to the Seven Wonders of the Natural World. Why? Because it’s illegal to hold money-making, official races in a national park. So like any good extreme athletes, people run it anyway for competition and glory alone.

It covers between 42 and 44 miles (more on that in a minute), and around 10,700 feet of vertical gain. And it does so in some of the harshest climate and unforgiving terrain on the planet.

While there is no official race held here, runners like Walmsley have jockeyed since 1981 to claim the “fastest-known time” (FKT), which requires documentation and is tracked, more-or-less officially, by the website Fastest Known Time. 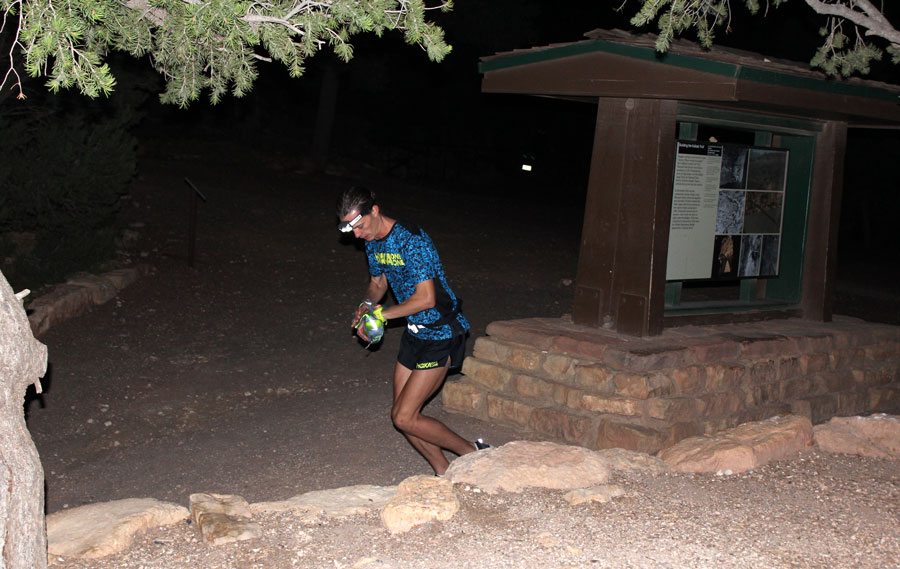 R2R2R typically starts on the south rim on the Grand Canyon, descending one of two routes to the Colorado River and Phantom Ranch. Speed demons seeking new records typically take the shorter, steeper South Kaibab trail; the slightly longer but more gradually-inclined Bright Angel trail is also an option. You can likewise make the return voyage up either route. (Hence the 42-to-44-mile range.)

From there, you follow the North Kaibab trail, traversing the Canyon’s corridor before climbing the north rim.

That’s a single crossing – rim-to-rim. Then you turn around and go back.

Go during the summer and the heat will be unbearable on the bottom. But go during the winter, and the conditions up high can be icy and snowy. (The south rim sits at over 7,000 feet of elevation, after all.)

There are a couple narrow windows for ideal conditions if you’re going to attempt the R2R2R.

“I’ve done the R2R2R in late February, March, April, and September, October and early November,” said Paul Holovnia, 54, of Lexington, Kentucky, an eight-time finisher of the route. “Both early spring or late fall are great times, but you have to be prepared for anything regarding weather. For example, in the early November crossing, we had 80 degrees in the canyon and almost a complete whiteout on the north rim.” 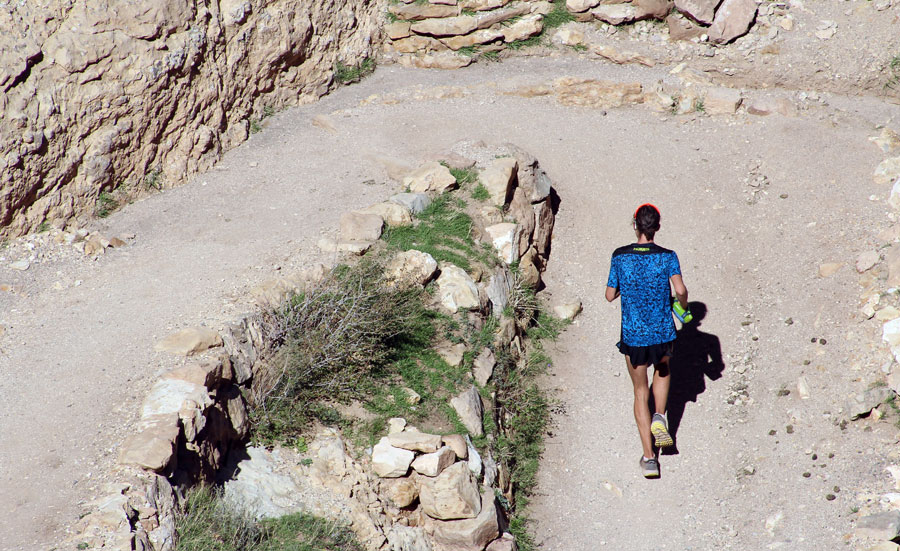 What goes up, must come down. Photos courtesy of the author.

Holovnia also urges those planning a crossing to call ahead and make sure the north rim is open; he has, on one occasion, been turned around by rangers due to trail maintenance.

Plan for Water – and Have a Contingency Plan

You can regularly check the status of every water spigot in the cross-canyon corridor on the backcountry updates section of the trail website. Hint: the more that are on, the better.

But, according to Holovnia, there is no guarantee every spigot will have flowing water. Some runners arrive at the south rim to learn the water status has changed since they last checked; more frighteningly, some might arrive at a water stop only to find no water comes out. 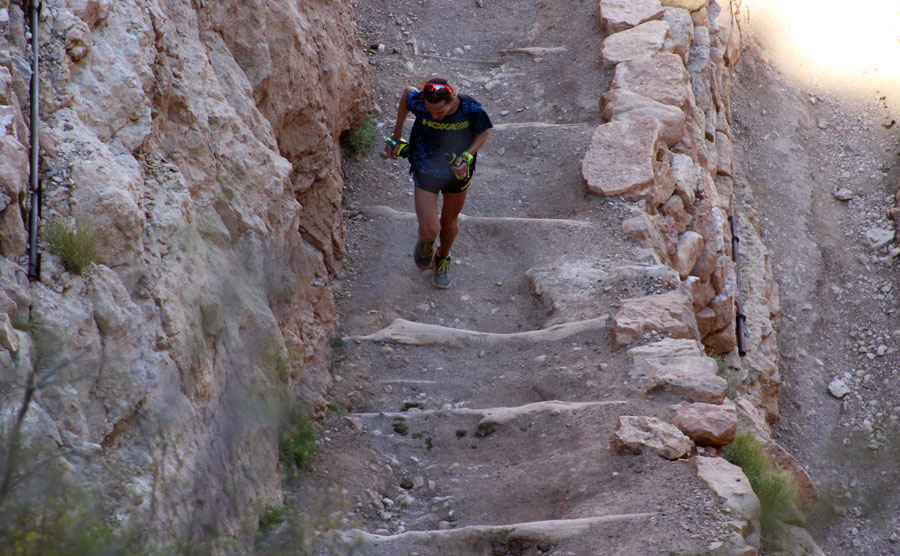 “You always need a plan B for water,” Holovnia said. “Pipe breaks are common, and even if water is on the day before you go, it can be off when you get there.” He’s even put snow in his bottles on the north rim when the water was turned off there.

“River water is always running from Roaring Springs, Cotton Wood, and Phantom Ranch,” he added. “So always carry some type of filter or [iodine] tablets as a backup.”

The Hardest Part is Last

The trails leading down – and up – the Grand Canyon’s respective rims are considered some of the most dangerous in the world. That’s not necessarily due to their exposure, or falling risk – though that exists.

In short, running or hiking the Canyon is like climbing a mountain in reverse. Every downhill, relatively easy step down will be met with a slower, more strenuous step up in order to get out. 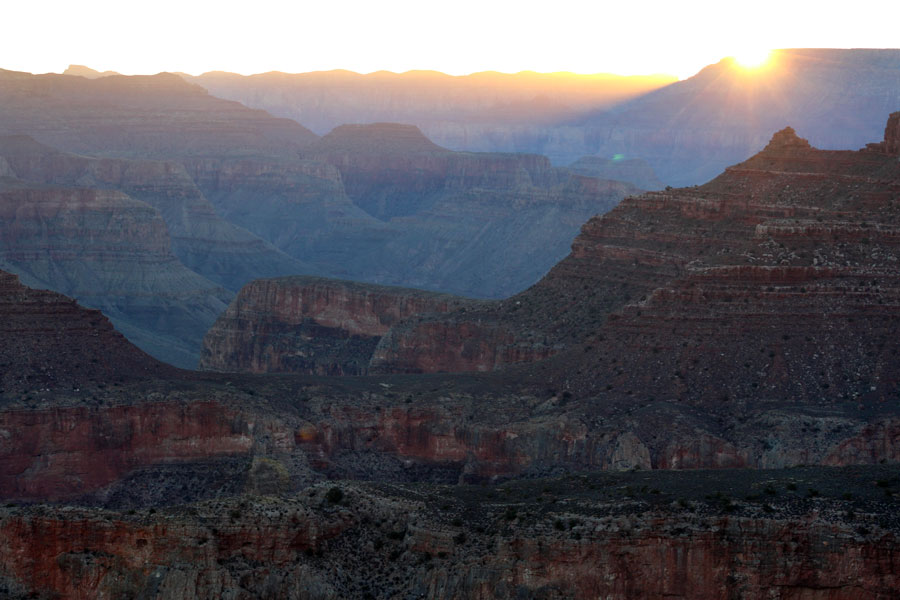 If you get to the bottom, you need to get yourself back to the top; and climbing more than 5,000 feet with the sun bearing down and the air thinning out is a tall order.

The (over) confidence of ultra runners needs to be kept in check, said Holovnia, noting the best-conditioned athletes are often the ones who get into trouble and require rescue. “This place can become dangerous if you overdo it in the heat,” he said.

In other words: enjoy it, but always respect the Canyon.