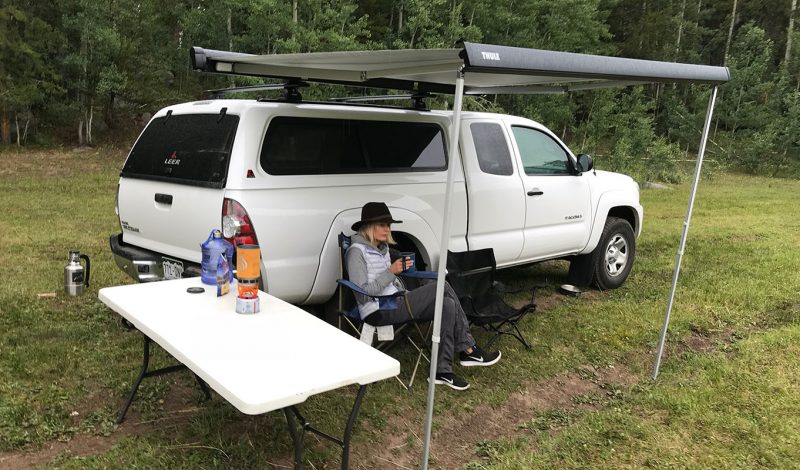 Aftermarket vehicle awnings have exploded onto the camping scene in the last couple years. These side-mounted retractable shade and rain covers have migrated from the world of RVs and trailers to small trucks and even passenger vehicles. Most are pretty cheap-looking vehicle add-ons. But Thule’s new HideAway awning is in a class pretty much by itself.

When I first saw the Thule take on the awning trend at last summer’s Outdoor Retailer show, it was clear what the company’s strategy was. The Thule HideAway is a far cry better looking and higher quality than the rest of the field. It’s currently the highwater awning on the market, and the price reflects it (almost $850 for the basic package), but it is a solid, well-built, elegant system that surpasses everything else I have seen.

The HideAway mounts on small trucks, SUVs and Sprinter vans with roof racks, and there’s also a version that can mount directly to the side of a tall vehicle, like a trailer. It can quickly and effortlessly be opened by one person operating a telescoping hand crank. Two integrated support legs swing down and can be adjusted to the right height, and then the system rolls itself out, straight into place, without a need to tighten the tarp. The tarp itself is waterproof and can be combined with accessory rain-blocking or sun-blocking walls to create an enclosed space if you really want to set up a living room.

I got an early sample this spring and it’s become a staple part of our car camping setup. Here’s why.

You Can Always Beat The Heat

Obviously, awnings let you import shade wherever you go. In a lot of the country, that’s a big deal in summer, where natural shade is hard to come by.

If we’re camping in a treeless area, like a lot of Utah or the Southwest, the sun can be a killer in the middle of the day—and the last place you want to be hanging out is inside a steamy tent. Baking through an afternoon of blasting sun is a bummer, and really hard on kids and dogs.

I have loved pulling into sun-blasted campgrounds and just opening the awning and having a nice shaded place to set up camp and a cooking area. It’s a standing room area out of the sun that’s hard to really appreciate until you find yourself without it.

One of the worst things about car camping is having to crawl into a cramped tent when the rain comes in, or waiting out a drizzler in a steamy car. It drives a lot of people to buy trailers. No one wants to go camping just to hunker down in a vehicle or a muddy tent for hours. 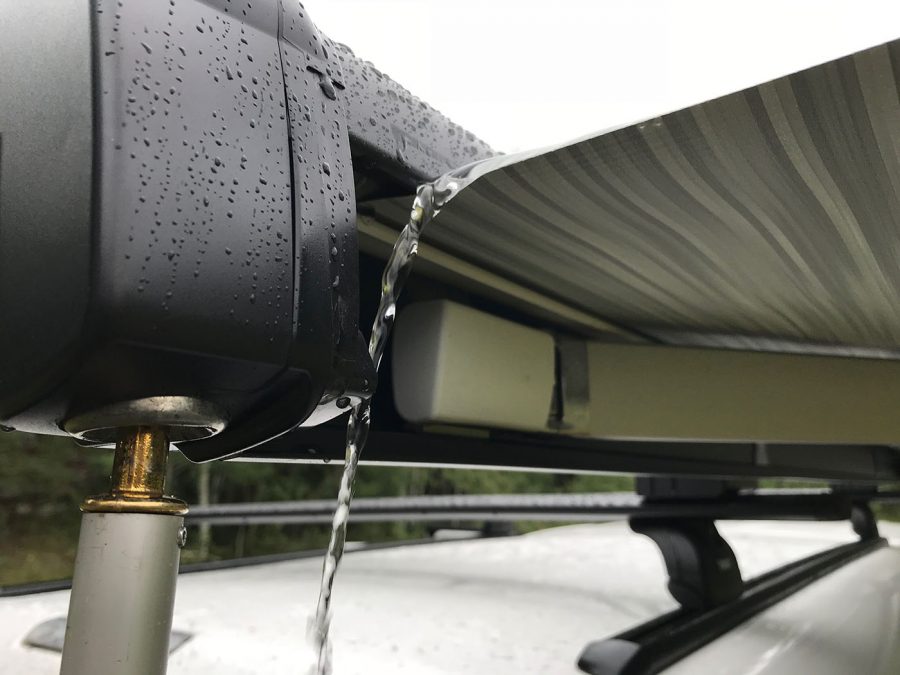 Having an awning is like bringing your front porch camping with you. When the rain comes in, you just grab a chair, crack a beer, and get back into a good book in the open air. Squall during mealtime? You can keep cooking and eat without needing to squat awkwardly in a muddy tent vestibule.

It Beats Dragging Along Your Own Shade Structure

Packing a shade tent takes up a lot of room. They’re heavy and bulky, taking up a ton of cargo room in a trunk. They also take up a lot of campsite real estate when opened, and they’re a pain to set up, with a lot of fussing with guy lines and tie downs (usually requiring two people).

They’re also never with you when you need one. No one sets out thinking they are going to be stuck with a sun-baked campsite. Having an awning on the car itself means you have one less thing to think about, and you’re not left out of luck when the campsite pickings are slim or a surprise afternoon thunderstorm rolls in.

Frankly, most vehicle awnings look tacky. Some are wrapped in zippered canvas bags, which will probably only last a few seasons before they bleach out and fray. Others are like clunky erector set plug-ons, with steel L-brackets, exposed bolts and a crunchy look. 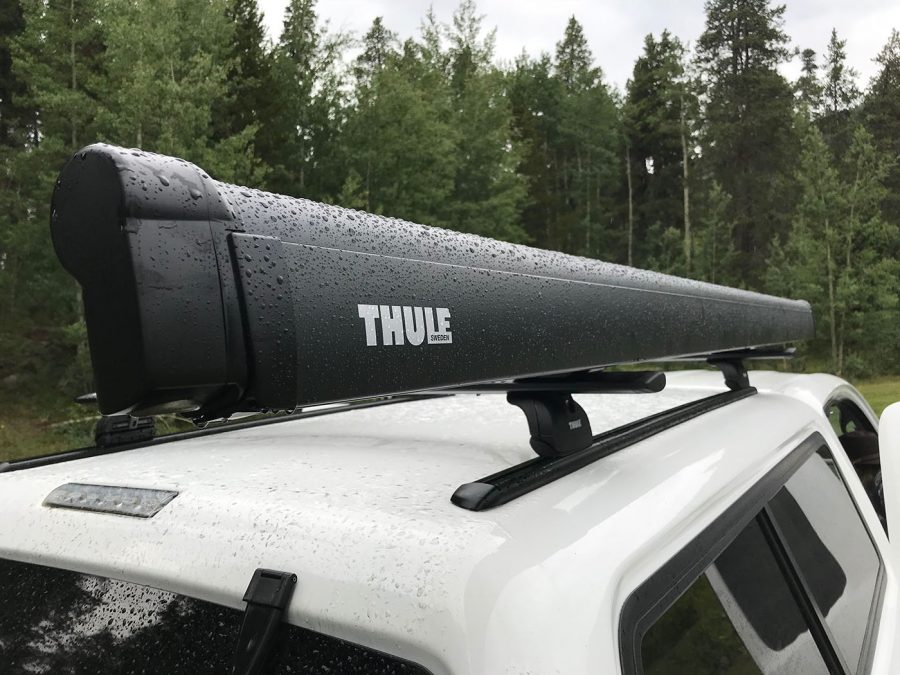 I like that the HideAway is housed in a sleek, hardshell box that won’t detract from any vehicle’s looks. This is an awning that can ride an old Tacoma or a waxed Range Rover. It’s slick.

It Can Mount High Up

A lot of awnings need to be within reach to open. The HideAway is opened with a telescoping crank that allows you to mount it high up on a tall vehicle, like a Sprinter van, without having to climb up the vehicle every time you need to open or stow it. It’s a really smart design for taller rides.

Opening it is a Piece of Cake

Most awnings are basically a big square fabric rolled or folded up in a box—you need to unroll it down the side of your car, attach legs and braces to the flimsy fabric, attach some lateral joists, and then sometimes attach additional guy lines to keep the fabric taut.

I like that the HideAway is supported by two big braces that elbow open under the tarp as you crank the awning into position. It is fast and requires a lot less fuss than awnings with lateral supports—those running along the tarp itself—which need to swing out and be manually adjusted for length.

If you do pick up a HideAway, be sure not to open the awning more than two feet without dropping down the legs to support the weight. The awning isn’t built to support its own weight without the legs, so you can stress the joints if you crank it out of its box too far without support. (I kind of wish the design were better on that point, and maybe its not that big a deal, but I would follow the instructions.)

That doesn’t necessarily mean you need a second set of hands, though. I find that if you crank the awning out two feet, you can then drop the legs down and position them forward at a 45-degree angle. That way, when the awning opens the rest of the way, it rides forward with the support of both legs until it reaches the spot you need it.

The HideAway comes in an 8.5-foot wide version that rolls out a 6.5-foot long shade area. It also comes in a 10-foot wide version that rolls out 8 feet as well. The one you see on my truck in the photos is the smaller, 8.5-footer. You can mount it fairly far out on the ends of the load bars, which helps save room for other mounts like bike racks or a cargo box. I mounted it on the passenger side of the truck because I found it easier to crank open if the end extended off the back of the vehicle a bit.

The rack weighs almost 40 pounds, so plan to have someone help you mount it. It also needs widely spaced bars—at least 36-inches—to balance the weight of the awning on a vehicle. Don’t plan to mount it on a VW Bug. (Or actually, please do, and send us the photo.)

The HideAway awning runs about $750 itself, and you will need a $100 adapter to mount it to your bars. That’s at the top of the price bracket for awnings, but the quality of the system will speak for itself. 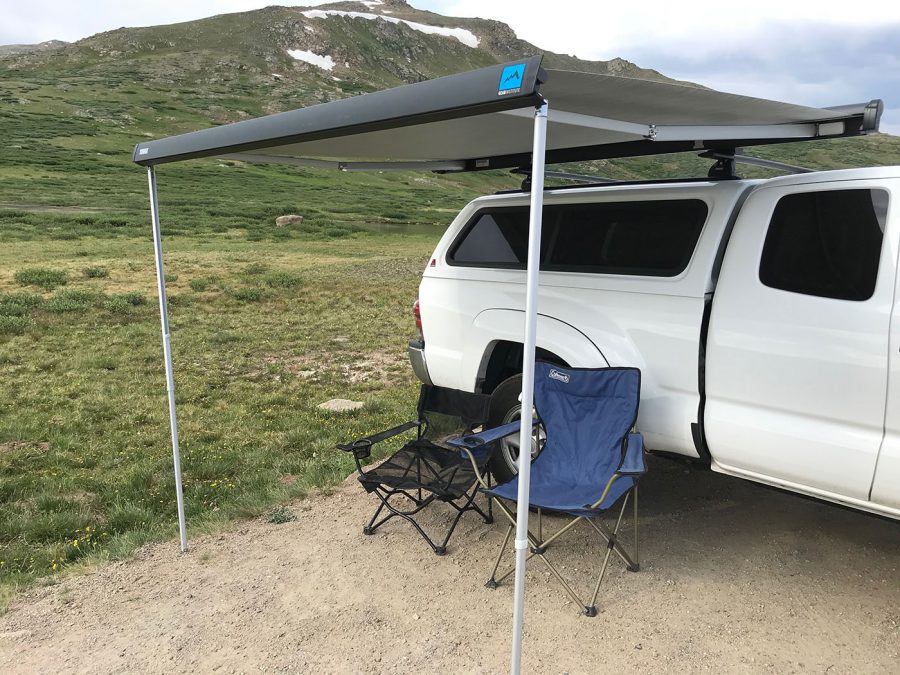