What You Need To Sharpen A Knife 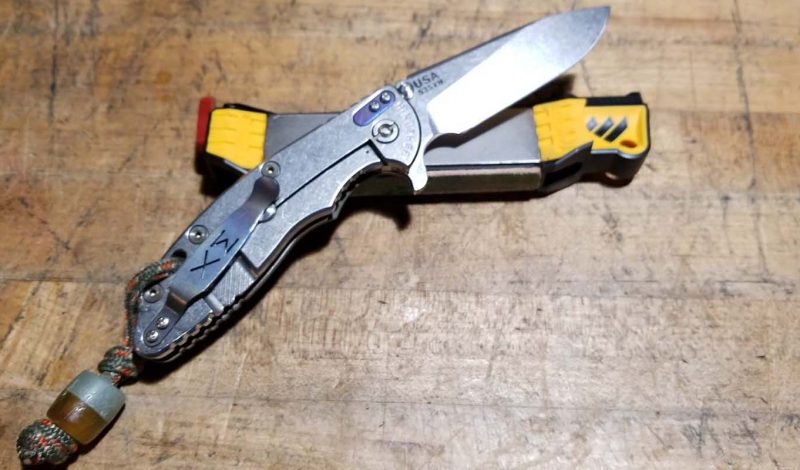 Aside from water and clothing, knives are arguably a necessity in day to day life. Whether you spend your time inside, outside, or break it up between the two, “Man’s first tool” provides us with endless possibilities – from utility to survival – and, like anything else, they need to be broken down and maintained from time to time. The most important form of maintenance is on the blade and making sure you maintain a good, sharp edge – as a dull knife is about as good as a spoon when it comes to whatever you would need a knife for. However, it can be a process, but the end result of properly sharpening a knife blade with the right tools can be likened to Christmas morning as a kid or even the first time you went to Disneyland.

There may be places where I go back and forth between “stone” and “hone”. I’m not losing my mind – it’s just how knife sharpening works. Stones are generally a rock like version of sandpaper but can also be made with diamond. Hones, are generally ceramic. You’re honing on all three. There’s a bunch of other stuff out there – we can get into tapes and silica belts and all that hot jive – but look, we’re just a bunch of outdoor folks trying to keep an edge in the outdoors, so there’s no need to get THAT technical here.

Maintaining The Right Angle: The singular most important thing about sharpening a knife is making sure you maintain the same angle with each pull. Changing the angle at which you hone a blade can either prolong the sharpening process or ruin a blade edge, which will require even more work to fix. Though it can be difficult to do, it’s a learned method that you can pick up over time.

Getting What You Pay For: If you’re looking for convenience and effectiveness, you’re going to pay for it – even when using flat stones. So, just like with any other piece of gear – or even your knife – you want to make sure the quality of the product is there, the right materials are being used, and the product actually functions as promised. You can’t just sharpen a knife on a rock and expect a honed edge. That’s just in the movies.

Choosing the Right Lubricants, If Any: This isn’t a big deal for anything but flat stones, but it’s worth saying – just because something says it lubricates, doesn’t mean it’s going to work in conjunction with your honing material and knife blade. In fact, water was the most common lubricant used for years. I’m not trying to steer you away from lubricants, just open your eyes and read labels.

Methods: When it comes down to it, you need to feel comfortable in what you’re doing. Most knife sharpeners use either a pull method or draw method. When you’re pulling, you’re generally pulling through a guide of some sort, towards you. It’s easy. When you’re drawing, you’re lying the knife on its side at an angle and drawing it towards you. It looks super elegant and makes you feel a little like a samurai.

Time: We’re outdoor folks who generally try to balance our time between the indoors and outdoors, and if we’re all being honest – we’re fast paced and modern. We’ve been conditioned into instant gratification, and you know what? That’s okay – as long as the corners we cut still give us desirable results. So, I’m going to shed some light on a couple of tried and true methods – that won’t include the time consuming, albeit honored tradition of sharpening your knife with a stone.

There are a number of types of sharpeners available on the market and I mentioned some above like belts, diamond, ceramic, etc. But we’ll just keep it simple and focus on the big three: Plug-in powered Automated Sharpeners, Stationary or Mounted Sharpeners for manual human powered sharpening in your shop and Pocket or Field Sharpeners for while on the go. We’d be remiss not to mention the original, the stone.

The old school way to sharpen a knife—still common among hobbyists—is by using a stone; either dry, with water, or with specific honing oil. Stones are generally affordable and easy to come by, but they take a considerable amount of time, attention to detail, and for you to repeat a monotonous process over and over again. A process which, if you’re not paying attention, can easily ruin the edge of a blade. The key is maintaining a certain angle from the blade to the stone, within a degree or two, with each pass, and the reversing that method to do the other side. Millions of folks can do it, and the method has been around since the first time someone had to sharpen knives – which, looking back in time, was probably around the time when fire was invented. 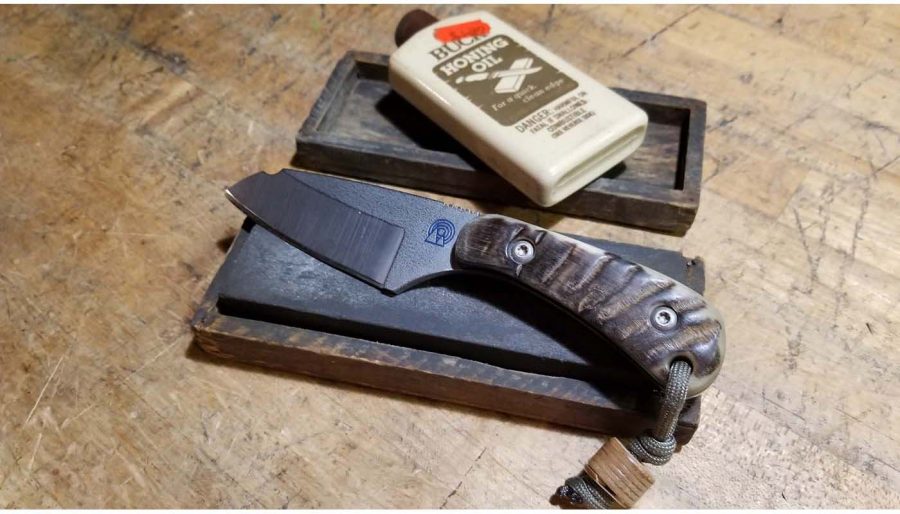 With that being said, I only recommend that people who have experience in sharpening knives or want to be challenged with the trade-off in learning a life skill freehand on a stone. After all, it is generally rewarding – you get out what you put in. However, I’m a knifemaker by trade, and have been using knives – of all shapes and makes – since I was in grade school. I can use a sharpening stone proficiently, but knowing that there are other easier and more satisfying ways to sharpen a knife in the twenty-first century, I would rather employ those methods – especially when it comes to having to sharpen multiple knives or when sharpening those dreaded serrations, common on many outdoor knives.

Folks have long frowned upon automated knife sharpeners, seeing them as less effective, overpriced, and an easy way out of a task. Though they are the easy way out, what’s listed below is worth consideration – as time spent diddling around the workshop (which isn’t a bad thing) could be time spent on the trail (which is always a good thing).

The Combo Knife Sharpener by Work Sharp is a simple and easy to use, benchtop knife sharpener that utilizes a medium grit 3M to sharpen your knife. This particular system is set to sharpen knives at 25 degrees, which is the common angle for most outdoor, outdoor sports, and military knives on the market today. More Info

The Original Knife Sharpener by Work Sharp is an advanced sharpening system by Work Sharp. It utilizes a range of different grit belts to allow you to dial in your preferred knife edge. It has adjustable guides which sharpen a blade edge at 20 or 25 degrees. More Info

With all of the available products on the market, I would be a fool to say that pocket sharpeners can’t get the job done when it comes to sharpening a knife. However, I can argue that a precision, stationary, hand sharpening system will take a little more time, and will more often than not give you a more desirable result because they are more precise, and usually mounted to a table or bench.

When I was a kid, Lansky had a poster with a guy with half his finger chopped off giving the #1 sign. It was awesome. I digress, Lansky has a full line of stone, diamond, and natural stone systems aimed at different types of users. All systems include an array of hones or stones, as well as their own Nathan’s Honing Oil, guide rods, and a guide bracket which allow the user to sharpen their blade at the correct angle. More Info 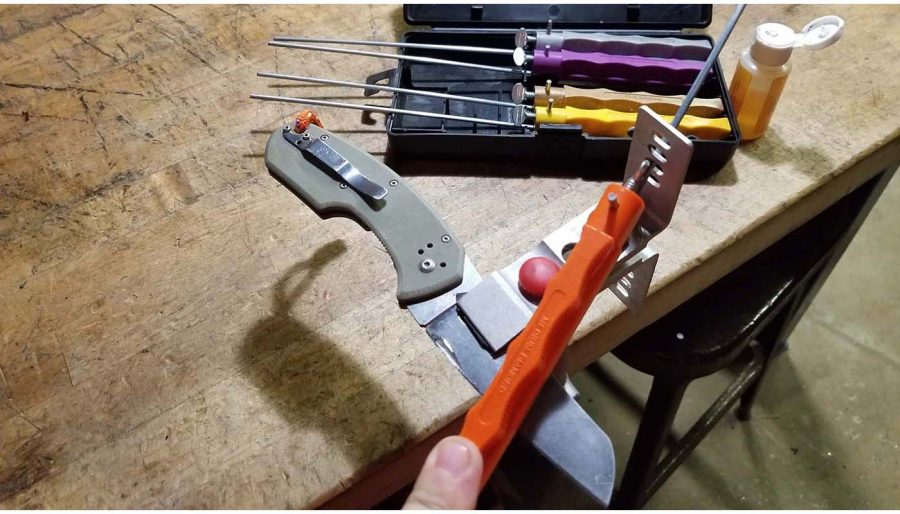 Edge Pro is a trusted name in the knife sharpening world, and their Apex Kits are something out of the future. They uses a series of stones and hones on a guided platform to create a precision edge. Depending on the kit you could easily get to that factory, skin popping edge, that faded away a week after you originally bought your knife, it just depends on how much time you want to put into it. More Info

Complete and compact, the Sharpmaker system by Spyderco utilizes a multi-functional platform to allow the user to reclaim their knife edge at a multitude of angle options. To do this, it relies both on ceramic and brown stones of differing levels. Spyderco testifies that this system takes a bit of training, it even comes with a CD – but once you’re dialed in, you’ll have an edge in mere minutes. More Info

Pocket sharpeners are quick and easy, and are great on the go, but you want to make sure they carry over some of the traits that more traditional, often, stationery sharpeners have – like being made of ceramic, or diamond stone. Possibly a leather strop for a final, quick honing? In essence, you’re looking for a multifunction sharpener that you can rely on when you’re out in the wild. Here’s a top level look at three on the market today that could benefit you on the go.

Something of a multitool in its own right, the Guided Field Sharpener by Work Sharp features replaceable diamond honing plates as well as ceramic rods for sharpening gut hooks, fishing hooks, and serrations. The added benefit to this field unit is the angled sharpening guides for ease of use and repeated accuracy. More Info

The Pocket Pal by Smith’s is a compact and affordable unit with carbide blades and ceramic stones to shape, sharpen, and finish the edge on your knife. It also features a diamond rod for sharpening those lovable serrations. More Info

DMT has created a series of small, portable, and affordable diamond sharpeners that are designed to fit on your keychain and fold out of the way until you need it. What they lack in modularity, they excel in ease of use as each of the color-coded units is a certain grit. More Info