The secret to a better fishing shirt? Better fabric. 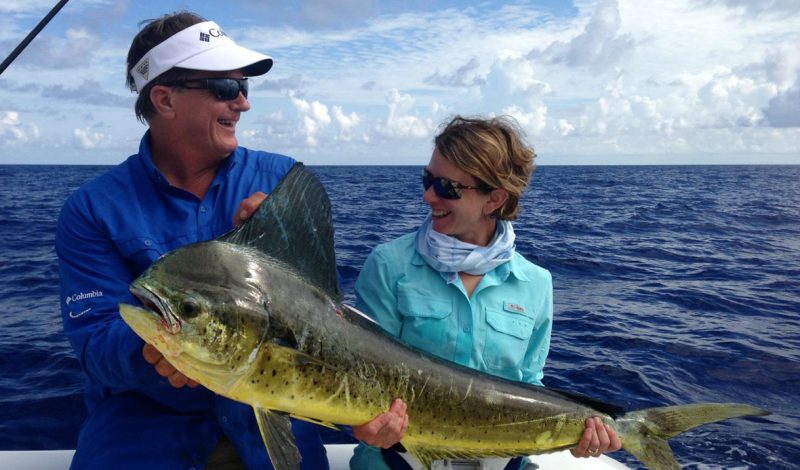 As soon as the dolphin hit the deck, I understood why Columbia makes a big deal about its “guts-repellant” clothing. Bloodshed isn’t a big part of the trout fishing I do near my home in Colorado, and unless I happen to prick my finger on a hook, a typical session on the river exposes no bodily fluids (mine or the trout’s). But saltwater fishing is more Chain Saw Massacre than A River Runs Through It, as I discovered during several days in Key West last June with Columbia Sportswear. 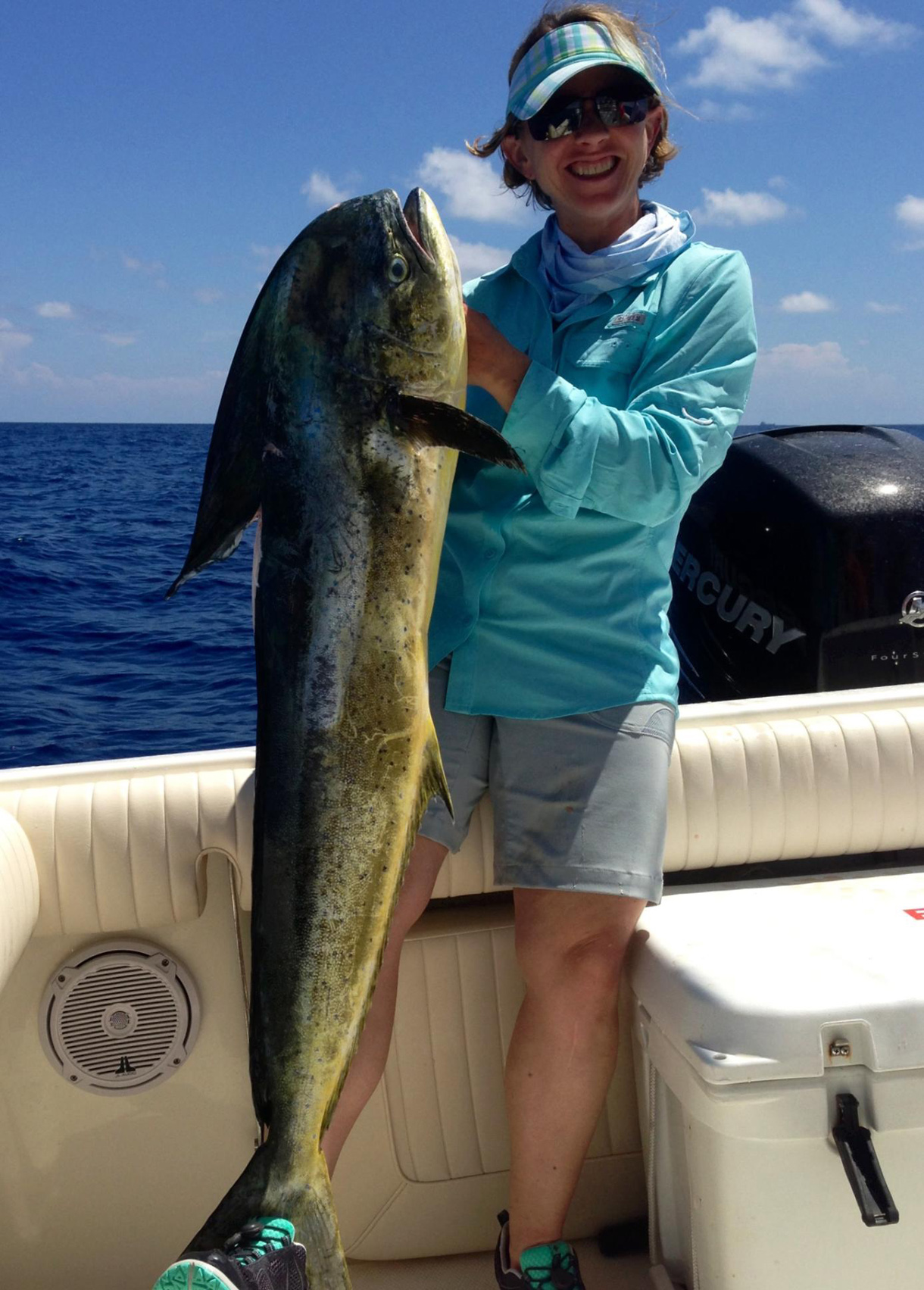 I’d been invited aboard the Mark VI, an offshore fishing boat that’s almost as famous as its captain, George Poveromo, a Columbia-sponsored angler who hosts “George Poveromo’s World of Saltwater Fishing” on NBC’s Sports Network. Though he’s the undisputed guru of offshore angling, he never belittled my newbie-ness, but he did make me land the day’s first hookup. My arms and back burned from the effort of reeling it in, which took a scant ten minutes and felt like an hour, so relief washed over me once the line tension eased and George hauled the 20-pound dolphin (also called mahi-mahi and dorado) over the gunwale. Then relief turned to alarm at seeing the once-pristine boat become a bloody murder scene.

A stripe of crimson stained the deck. George’s shirt and shorts were spattered with bloody slime, and mine were too, once I’d gotten close enough to admire the dolphin’s shimmering blue and yellow scales. Noticing my horror, George explained, “Not all fish bleed like this. Dolphin just happen to be particularly messy.”

That they do. But fortunately, we didn’t have to spend the rest of the day marinating in fish guts. The shirts and shorts we all wore feature Columbia’s proprietary Omni-Shield Blood ‘n Guts fabric finish, a specialized DWR treatment that repels stinky slime without inhibiting breathability. I wouldn’t say the blood beaded off my clothes, but it did brush off or slide away with a water rinse. 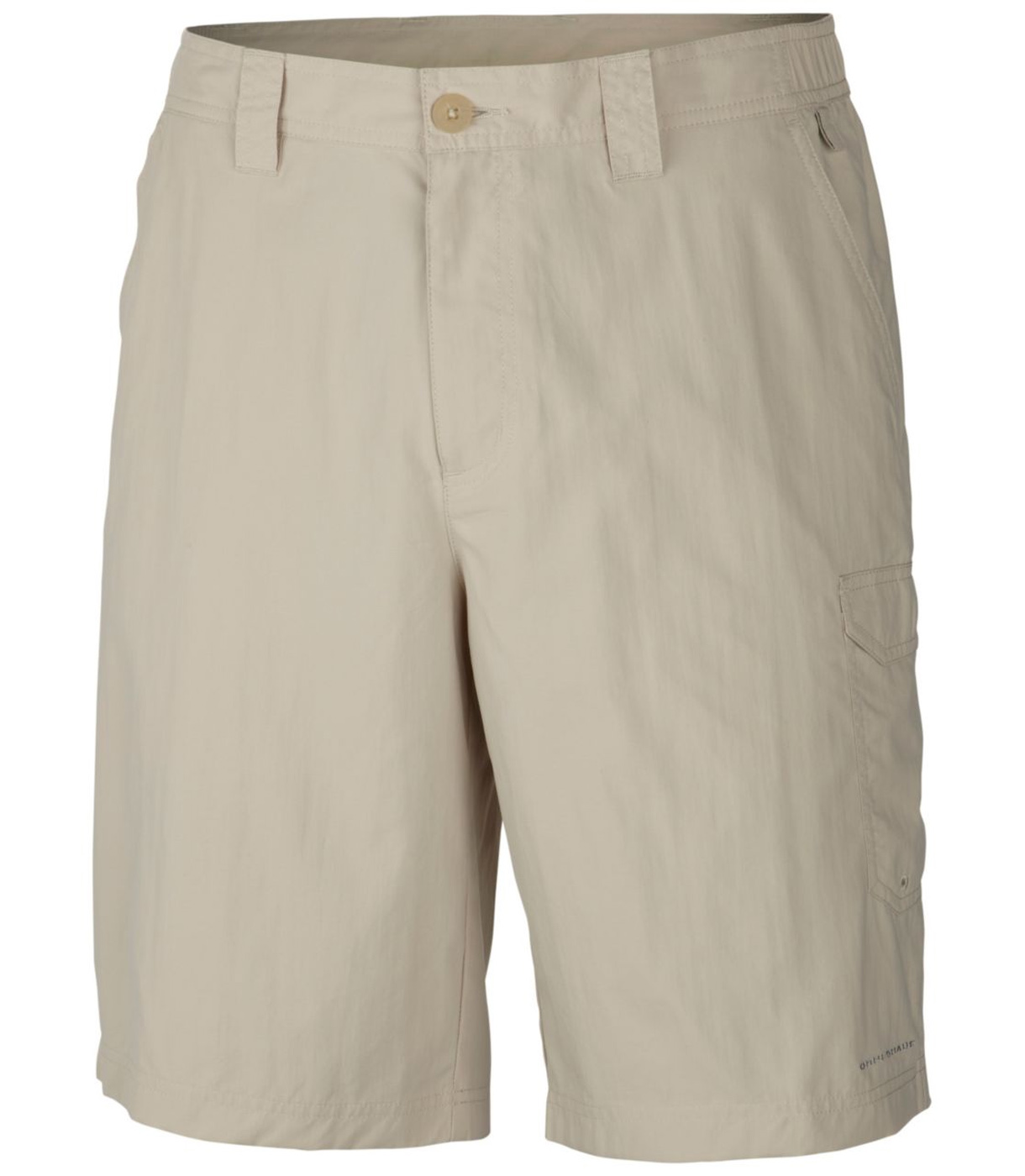 Fabric technology is what distinguishes Columbia’s PFG line of fishing apparel from its competitors. Yes, other brands make top-performing clothing, but Columbia is more invested in fabric development than most. Instead of shopping for its fabrics on the worldwide marketplace as most companies do, Columbia maintains a Product Innovation Team (nicknamed the “PIT crew”) that designs its own materials.

The PIT crew claims credit for formulating Omni-Freeze ZERO sweat-activated cooling, a fabric subtly patterned with little circles that expand as they soak up your sweat. “That swelling action sucks warmth from your skin,” explains Krystl Tonkin, Marketing Specialist for Columbia Sportswear. “A lot of companies incorporate chemicals into fabrics to keep people cool, but [Omni-Freeze] is a physical reaction,” she says.

PIT’s newest innovation is Solar Camo, which debuts in select shirts hitting market in spring 2015. It’s a fabric patterning that changes color when activated by light and heat. Indoors, on a clothes hanger, Solar Camo exhibits a subtle, tone-on-tone gridded pattern, like a digital camo. But when exposed to the sun, or when warmed by a hot body, white checks emerge to help the angler blend in with the sky and clouds. 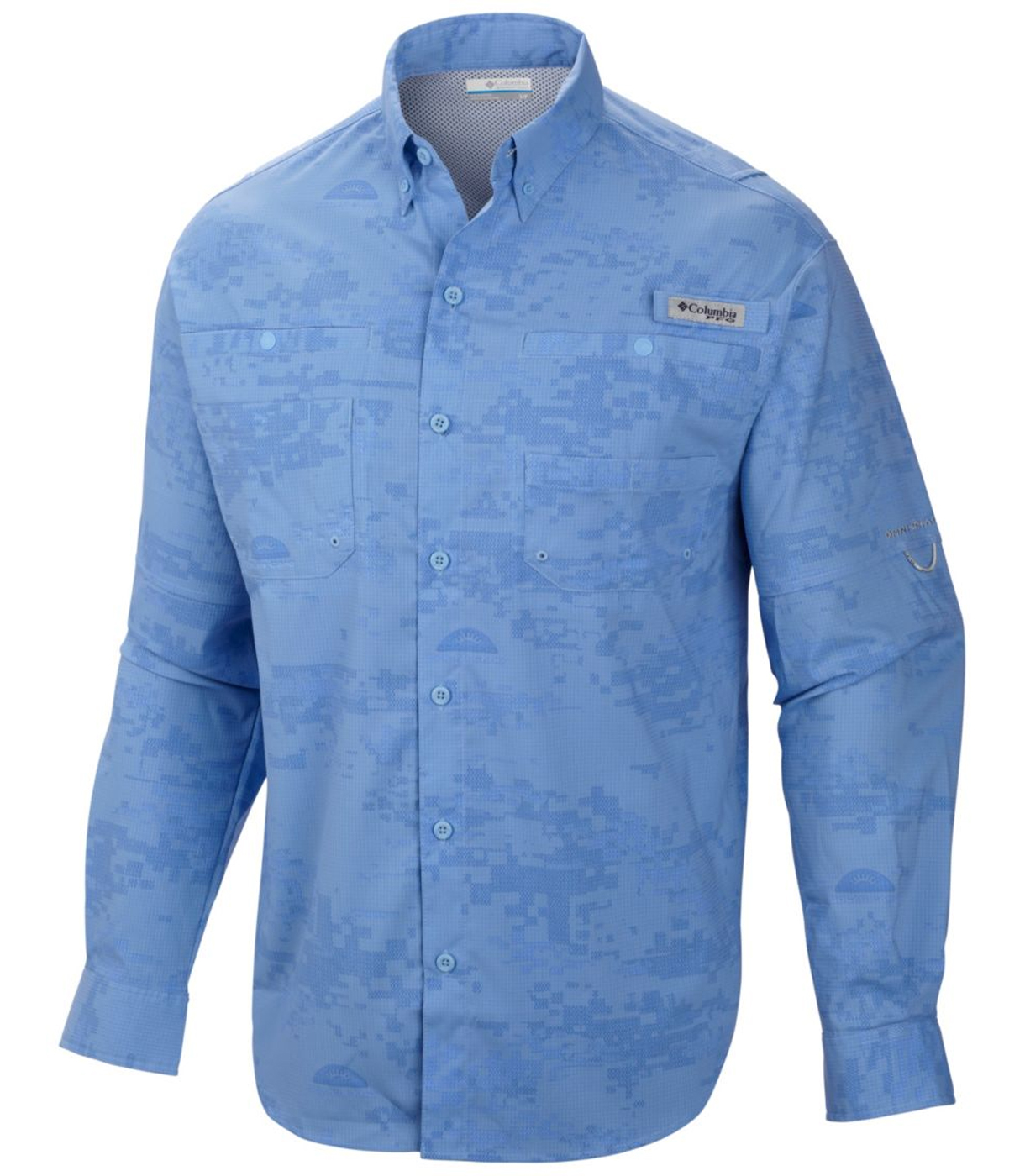 “We collaborated with a scientist in Florida who studied the connection between what anglers wore and the number of fish they caught,” says Tonkin. Apparently, anglers in light-colored shirts caught more fish, possibly because they resembled clouds rather than predators.

And by developing UPF-protective fabrics, Columbia became the first apparel company to win endorsement from the Skin Cancer Foundation. Every garment in Columbia’s PFG line offers a UPF rating of at least 30, with some pieces offering UPF 50 (or more). “UPF 50 is the most that the foundation allows us to claim, though in reality some fabrics may offer even more protection, depending on the weave,” says Tonkin. Skin-cancer prevention explains why the PFG line includes fingerless gloves. “The top of the hands is a place where melanoma frequently develops among anglers,” says Tonkin.

Such fabric innovations help Columbia improve upon basic tees and shorts without overloading them with unnecessary features. After all, I don’t need (or even want) lots of window-dressing on a long-sleeved crewneck, because I prefer its classic simplicity. But the basic-looking Solar Camo Long Sleeve Knit Shirt ($100) is made with silky, skin-pleasing polyester fabric that keeps me cool, protects me from UV radiation, and helps hide me from fish. That’s a lot of added value. 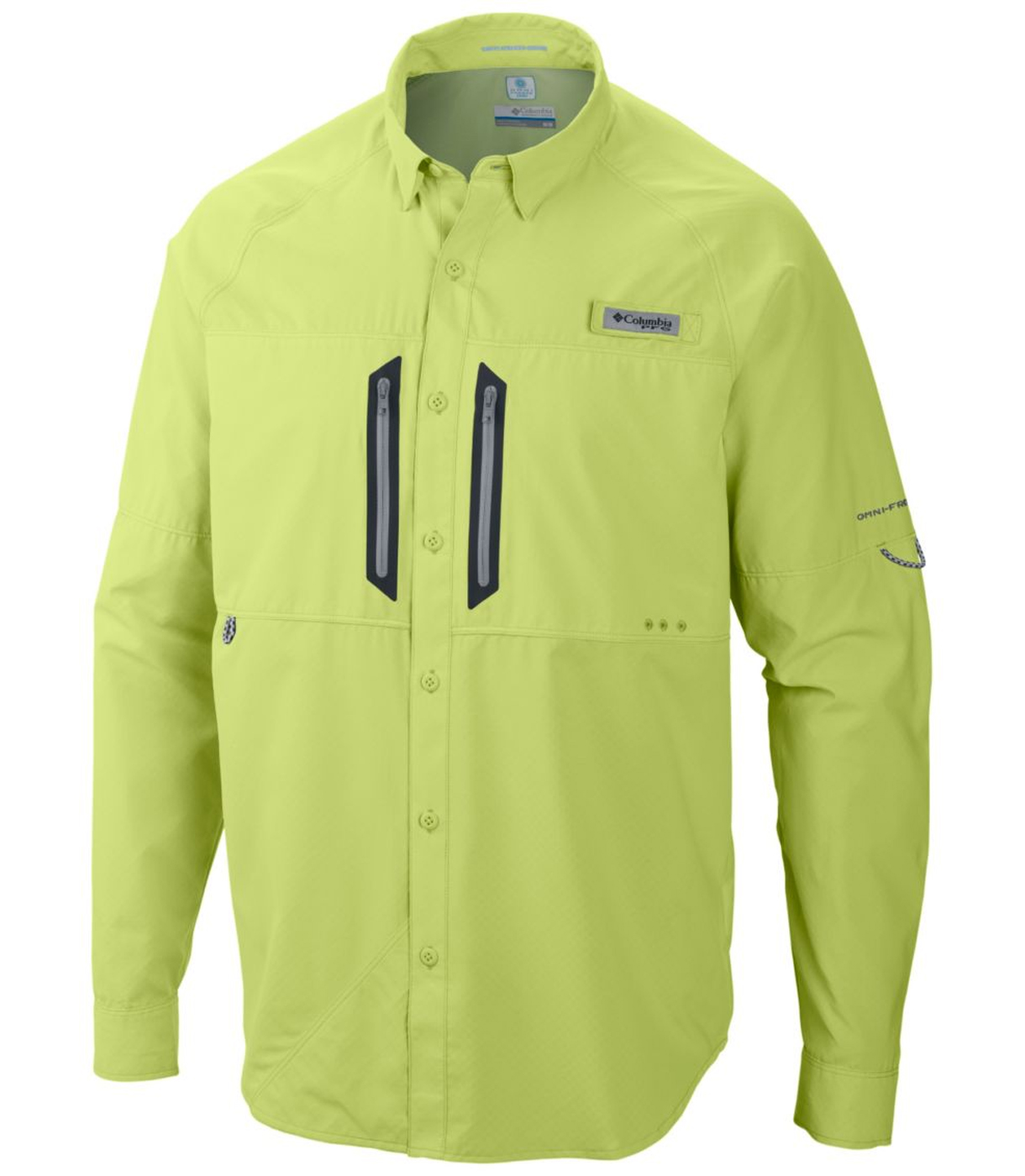 Other PFG pieces do feature fancier tailoring intended to improve ventilation. The Solar Cast Zero Long Sleeve Shirt ($110) is a collared button-down that combines Omni-Freeze ZERO fabric and physical vents on the upper back. The Solar Camo Long Sleeve Woven Shirt ($140) also includes back venting. “Ventilation is a big push for us this spring,” says Tonkin. “Actually, we like to call it vent-elation,” she jokes. The initiative extends to footwear, such as the Megavent PFG ($105). With vents in the midsole, it looks an amphibious trail-runner, except that its sticky, non-marking outsole is specifically designed for boat decking. 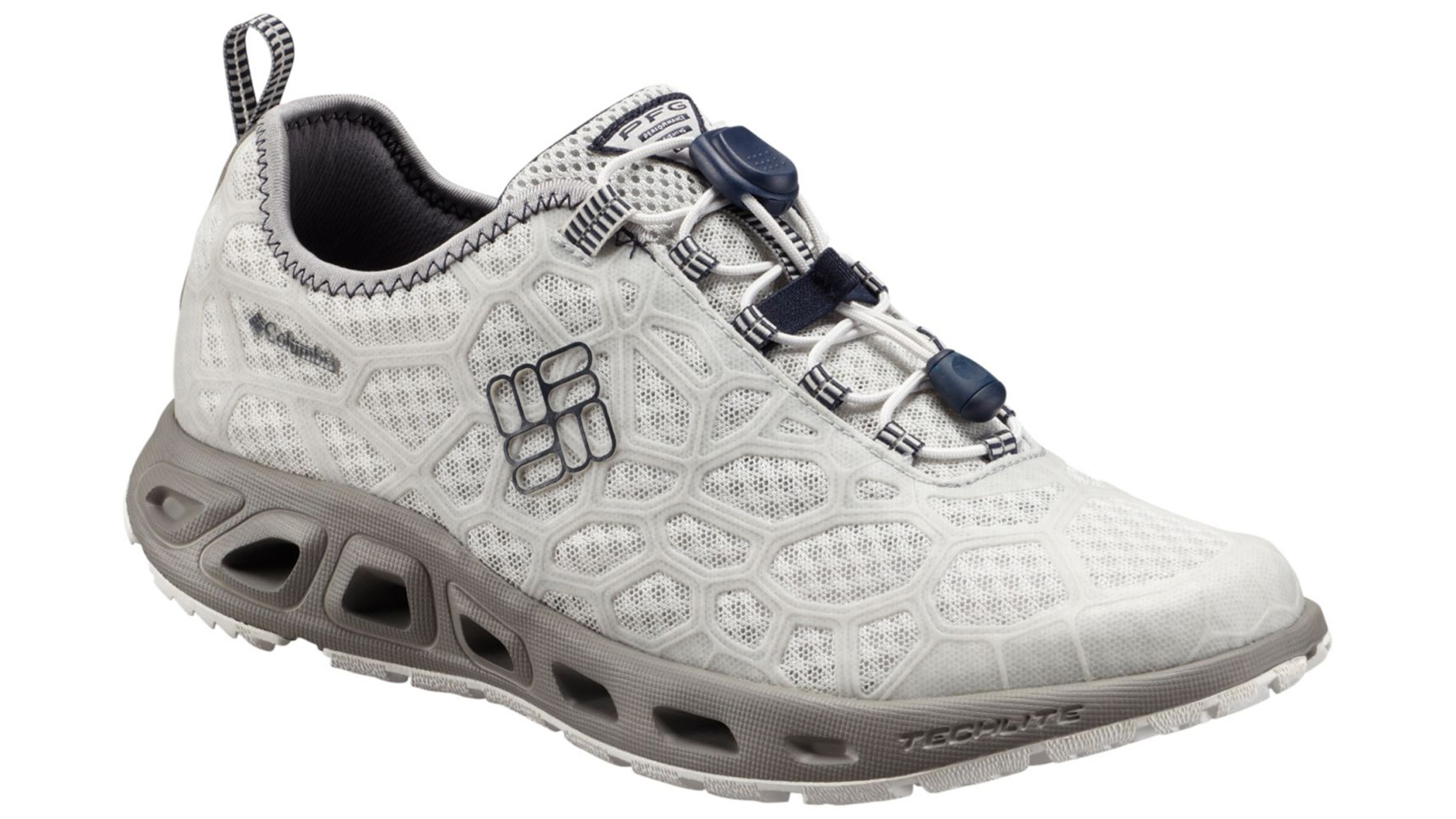 The Megavent also uses the “Blood ‘n Guts” finish, so when I step off the Mark VI, I don’t look like I’ve been wading through gore, even though I spent the whole day hauling in notoriously juicy dolphin. I look presentable enough for a cocktail. “If I look the part,” I thought as I walked into the spiffy bar near the dock, “I might as well act it.” 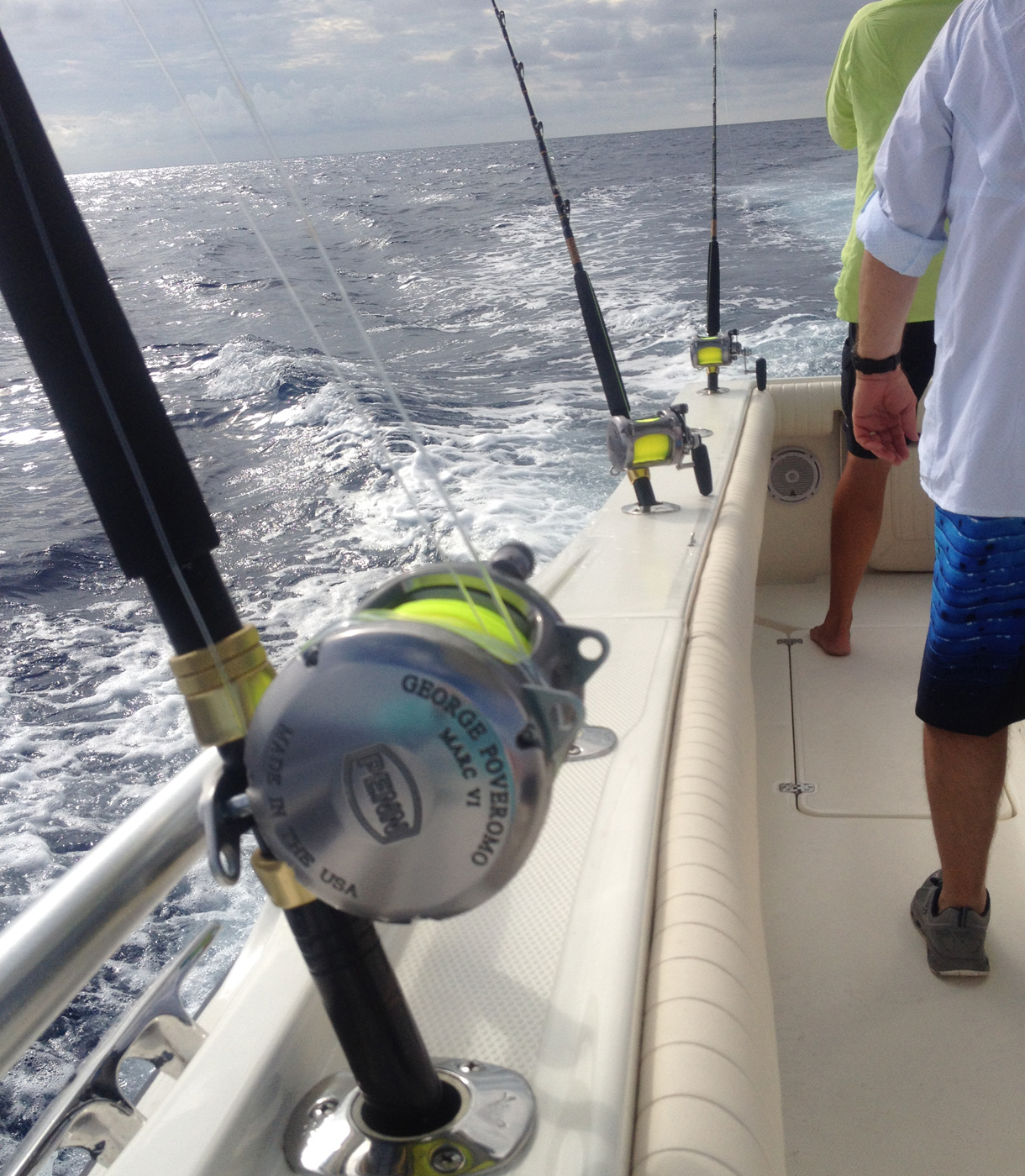