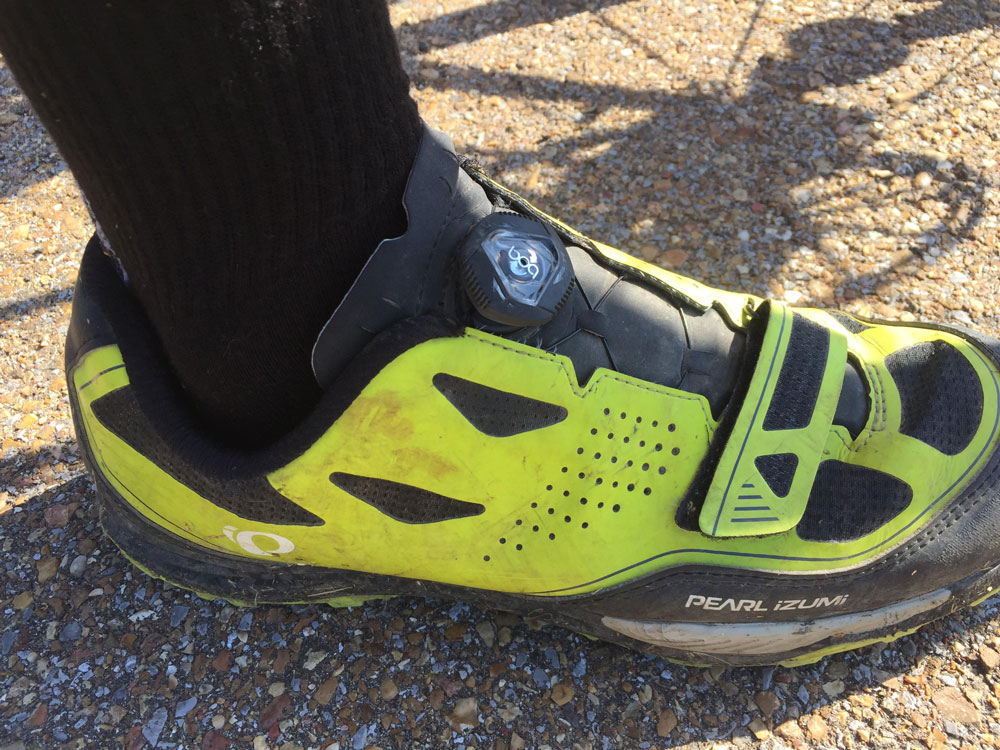 So how does the new version, two years in the making, stack up?

I wore the X Alp Launch IIs on every mountain bike ride for the last six months, hitting trails from beginner to expert level throughout the Midwest, including two IMBA Epics. The rides ranged from one-hour hammerfests to all-day affairs. The shoe garnered more than its fair share of compliments at the trailhead, as other riders were immediately drawn in by the eye-catching neon green color.

The break-in period was minimal; the Launch IIs felt as comfortable as a well-worn sneaker after just a handful of rides. They’re light enough that you don’t feel like you pedaled with cinder blocks strapped to your feet at the end of a long day, but beefy enough to withstand abuse.

Both the tread and outsole give the Launch IIs the feel of a low-top hiking shoe. These would have been great when riding Pisgah National Forest last April when it felt like I was walking more than pedaling on the Laurel and Pilot trails. When encountering hike-a-bike sections, I managed to scramble over chunks of limestone and walked across roots with relative ease.

I chose a size about a half-size larger than my road shoes, as my feet swell on a long day in the woods. The toe box was large and, after getting some toe strike on one of the rock gardens heading up Hesitation Point in Brown County State Park, I was happy to know it’s reinforced for strength.

The carbon shank embedded in the cleat area gives extra stiffness, allowing more power transfer to the pedals. And because it’s not a full carbon sole, you still have plenty of flex when hiking. Walking around after a ride, I would almost forget I was still in riding shoes.

The biggest change from the original? A single Boa dial, right in the middle of the upper tongue, replaces the ratchet and the top Velcro strap. I’m a big fan of the Boa closure system, and have been slowly weeding out my shoes with traditional ratcheting because the Boa allows you to dial in your fit much better.

My biggest gripe with the Launch II is that I like my cycling shoes tight, like almost cutting off the circulation in my foot tight, especially during races. Despite the Boa, I couldn’t get the Launch IIs as snug as I’d normally like.

That said, they were more than tight enough for everyday riding. Hammering up Limekiln, one of my favorite Brown County trails, I was constantly moving around on the pedals as I maneuvered bike and body around switchbacks and over the jumps. My feet never felt like they were slipping out of the shoe, no matter how much power I was putting down.

So while the Launch II may not be ideal for racing, it remains my go-to for long-distance rides with buddies.