TemboTusk Skottle Kit: A Cultural Infusion for Food Prep on the Trail and Beyond 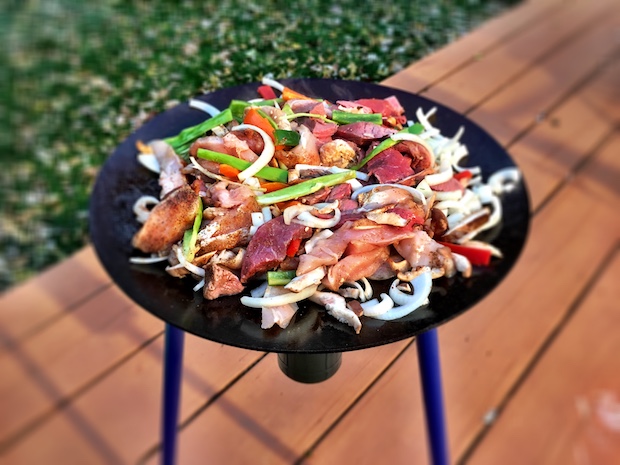 As we brace for the impact of yet another market segment for outdoor gear – overlanding – Gear Institute is working hard to provide you with coverage for some of the new equipment that is reaching our shores. In particular, we’re keeping an eye on the stuff that we think is viable for both people inside and outside of the overlanding craze.

Thus far, we’ve given you a broad picture of what overlanding is, a peek inside the world of a potential usurper to the automotive rack crown, a full-blown gear guide utilizing mostly common gear for overlanding, and even a first look at something called a “swag.” Now, we want to take you deeper down the rabbit hole to further indoctrinate you in the world of overlanding, with something we think almost everyone will find useful in their outdoor living experiences, particularly those who adventure in groups. Today, we’re going to tell you about the “skottle.”

First made popular as a means of grilling in South Africa, the skottle resembles an over-sized wok or standard paella pan that is used to prepare food for groups of people out on an adventure. More specifically, we’re going to talk about the American-made TemboTusk Skottle Kit, which has is already available here in the United States, and is seeing a surge in sales due to the growing interest in vehicular exploration. I’ve chosen this kit because, out of the few available in the U.S. market, and the TemboTusk take on the skottle holds true to tradition. It is also the only all-inclusive unit out there that is built to last as well. And while it does come at a premium price, we think that its cost pale in comparison to what it can do for you. Because what it does, it does exceedingly well.

WHO’S THE SKOTTLE FOR?
In its most basic form the skottle is a large steel saucer, which means that the fast-packer and solo hiker probably aren’t going to benefit from one – although everyone else almost certainly will. Designed to prepare food for two or more people, the skottle will fit in perfectly at base camp, tailgating, family camping, or even for folks who enjoy cooking out under the stars at home. The TemboTusk Skottle Kit is extremely portable, but it’d be overkill for someone looking to heat up a can of Dinty Moore Beef Stew on the trail. Instead, it is the perfect cooking element for those looking to cook a savory feast for friends and family.

FORM (The Overall Build)
In South Africa, skottle pans are traditionally put right over the fire so you can cook at camp. Though this method keeps the complexity down to a single steel saucer without accessories, there is no real way to regulate the cooking temperature, which means the risk of ruining your food is high. With this all-inclusive kit, TemboTusk raises the skottle up off the fire by placing it on top of three sturdy legs, adding a hanger for the included 10,000 BTU, single burner stove. This design also makes the TemboTusk Skottle easy to set up and move from place to place without the need to build a pit and start a fire. A modern take, yet still very traditional.

When you purchase this kit all of the following is included: an 18” preseasoned skottle pan, three legs, 10,000 BTU Burner, hardware, a carrying case for the pan and stove, and a carrying case for the legs. The whole thing comes together in just a few minutes using three hand-tightening screws for the legs, which, when tightened up, make the whole system incredibly stable on a multitude of surfaces. Additionally, the burner is held in place with a welded ring and two additional hand screws, which aid in securing it as well as adjusting how close the burner is to the bottom of the pan. 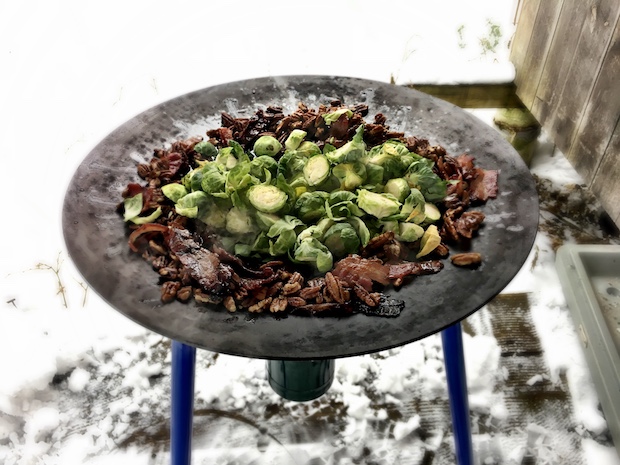 In terms of build quality, I could probably write a separate thousand word article just on how well the TemboTusk Skottle Kit is designed and manufactured. Aside from being a complete kit, the craftsmanship is above and beyond anything I was expecting – right down to the clean welds on the pan for the leg tubes and the burner hanger. Even the legs are covered in a thick, royal blue powdercoat built to withstand years of outdoor abuse. It’s really an impressive rig that is made far better than the majority of the competitors.

As far as durability is concerned, consider this: I left my dirty skottle out on my back deck for a week where it was covered in rain, then snow, then some more rain and in the end, all I did was wipe it down, oil it up, and put it in its case to head up to my cabin for some more culinary abuse. After all of that, it still looked brand new. There was no dust, debris, nothing that would show that it had been used before except for a little natural discoloration from the heat of the burner. In short, TemboTusk has created an ultra-premium, all-inclusive cooking unit that is built to last.

FUNCTION (How Does She Cook, Dude?)
The TemboTusk Skottle Kit comes complete with a single, 10,000 BTU Burner that runs off the ever-classic “Coleman Gas” 1 lb. green propane canisters. Depending on what TemboTusk has in stock when you order your Skottle Kit, you may get a burner with a piezo ignition or you may not. Either way, these single burners should be familiar territory for anyone who has cooked while camping. Just light the burner and adjust the knob until you get the perfect flame.

Like any gas powered outdoor cooking system your first go at cooking on the TemboTusk Skottle is a bit of trial and error. The flame from the burner heats the skottle pan directly. There’s no other pan, no damper, buffer, etc. So getting the right temperature can be a bit tricky at first. I found that it takes very little heat to get the skottle to its prime temperature and I only turn the dial up past a quarter turn when burning off any remaining chunks that I can’t simply scrape away. 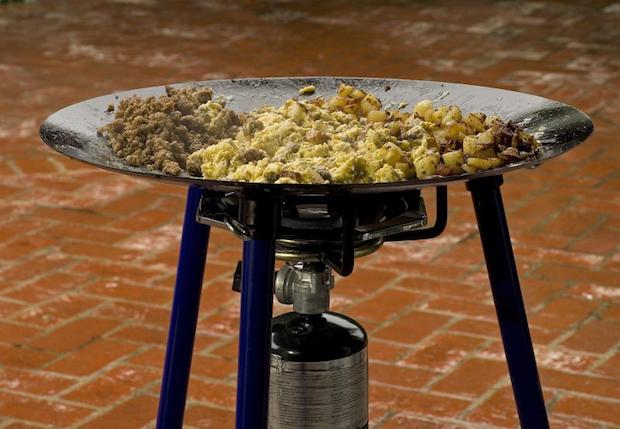 Note: like cast iron pans, you don’t wash a skottle – you just scrape off what remains, wipe it down, and then rub the surface with a little oil before putting it away.

As far as what you can cook on a skottle – the sky is the limit, as are the portions. With the 18” skottle pan you can cook for just a few friends or an entire army. When you’re getting familiarized with the unit, I would recommend you start off with something easy – like peppers and onions – and then move into your more complex veggies and meats. I started off with Kielbasa and Pierogis and we almost had to order a pizza as a result. However, the next night I cooked up a pile of chicken and steak fajitas that couldn’t be beat.

Overtime you’ll start shifting your food around and separating it in to piles and rings around one another based on how they cook. It’s really quite an art form that you quickly pick up as you use it, although no two people cook on their skottle in eaxtly the same way.

SO, WHAT’S IT COST, BRO?
As I previously mentioned, the TemboTusk Skottle Kit is going to run you a couple of bucks. Two-hundred and seventy-five to be exact. But not only is that price fair when considering what you’re getting, it’s also justified by its ability to cook for an army, especially when compared to some of the other “family style” gas stoves on the market today. Besides gas – and food – the TemboTusk Skottle Kit doesn’t need anything else for you to cook up a masterpiece, unlike conventional camp stoves and grills.

For example, if you look at an excellent – and somewhat comparable – portable grill like the Weber Q 2200, which features an ample cooking surface and a single, 12,000 BTU burner, you’re going to spend around $250 and it doesn’t include an elevated stand or cart for portability. I don’t see that as a deal breaker, but if you want to cook anything aside from meat, chicken, and peppers, you’re going to need a pan which not only adds to the cost, but instantly cuts down on your cooking surface. I think the Weber Q is a stellar grill for tailgating, but it’s not nearly as universal in its use as the TemboTusk Skottle Kit. 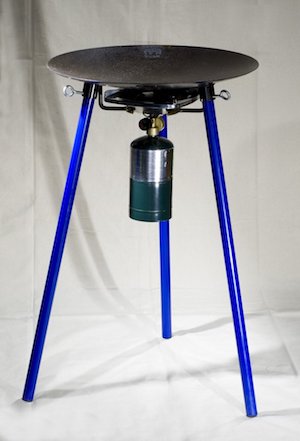 IN CLOSING (Get Your Credit Card Out…)
For those of us who enjoy overlanding and off-roading, – and for those of us who don’t – I would recommend that you try out the TembkoTusk Skottle Kit. After a long day on the trail, out on the river, or even just out there at the campsite, there’s nothing like coming back to an epic home-cooked meal. Well, camp fans, I am here to tell you that the all-inclusive TemboTusk Skottle Kit is so quick and easy that the seasoned pan can create a culinary masterpiece in all weather conditions.

I’ve even taken to using this skottle kit at home over my full-sized Weber Genesis grill. The flavor of a steak that comes out of that pan is about the best thing going for a carnivore like me. Anyone who has cooked in cast iron pans knows what I’m talking about. Furthermore, when visiting my cabin, the TebmoTusk Skottle has proven its worth in just a couple of uses. I’ve been able to prepare both lunch and dinner with ease and with quick clean up as well (just wipe it down). When you don’t have running water, anything easy is much appreciated. When your camp is half a mile from the road, and you walk in, anything light and portable is definitely nice too.

Hey, we all gotta eat, right? You might as well do it right if you have the means, and TemboTusk is providing you those means.