Book Review: Comrades on the Colca…a Race for Adventure and Incan Treasure in One of the World’s Last Unexplored Canyons 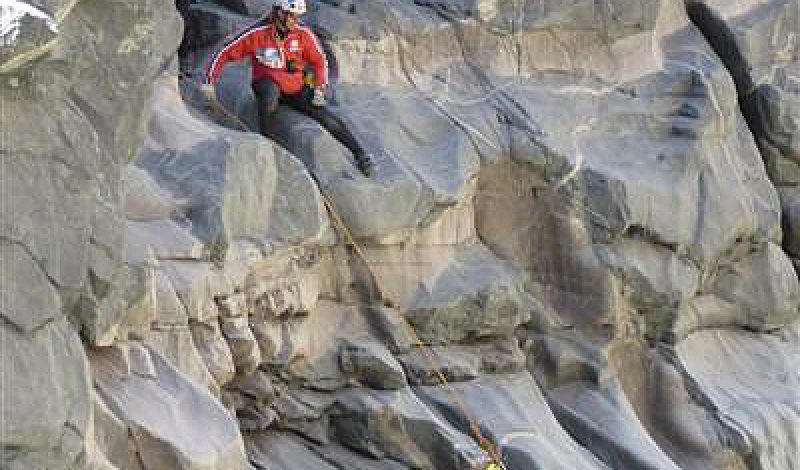 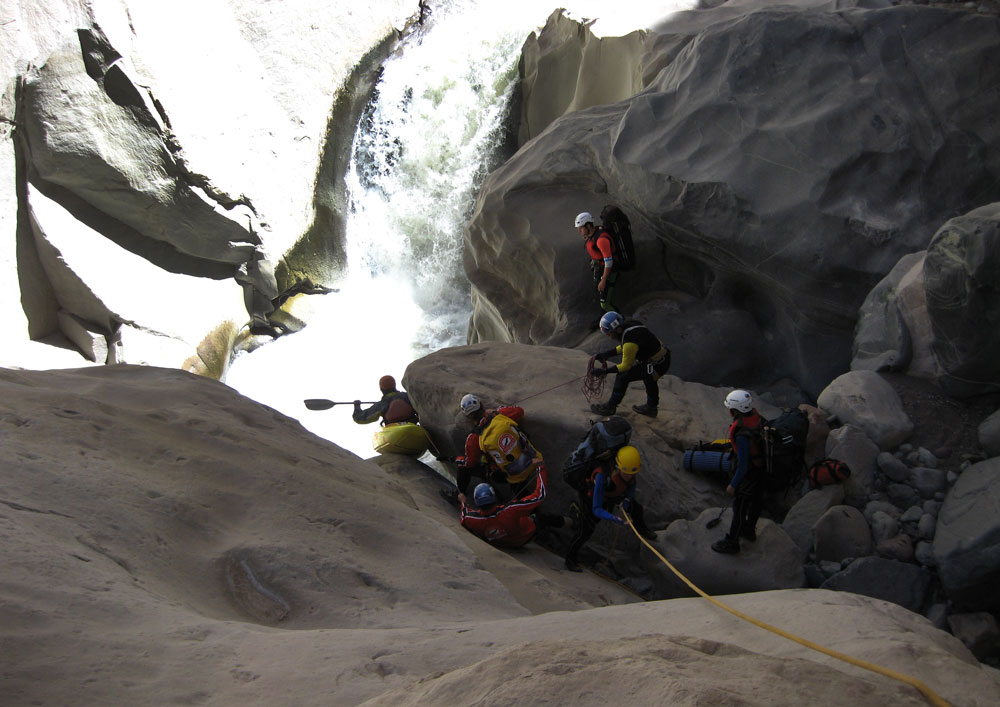 Adventure travel books aren’t really all that dime-a-dozen anymore. Sure there are more stories out there on the net and such, but truly gritty authors writing good books you can read on a plane or in bed or in the outhouse? Not so much.

And while book reports may not be your favorite thing to read either, just skip to the bottom of this post and click through to add Eugene Buchanan’s latest, Comrades on the Colca, to your must-read list.

A contributing gear tester for the Gear Institute and 14-year editor-in-chief of Paddler magazine, Eugene Buchanan has written about the outdoors for more than 25 years, from covering the X Games for ESPN.com to working for NBC at the Beijing Olympics.

This time Eug is in South America, with a team of Polish explorers on a first descent down the Cruz del Condor section of Peru’s Colca Canyon, the deepest gorge in the world.

Negotiating everything from un-runnable cascades to Incan mummy filled caves and skin-bubbling jungle plants, they discover not only the wherewithal needed to survive, but a rival Polish team bent on beating them to the first-descent goal.

Interspersed with tales of Incan history, legends of treasure hunting, and other South American exploits, Comrades on the Colca plunges into a gripping adventure travel narrative that will have you booking plane tickets to Peru. 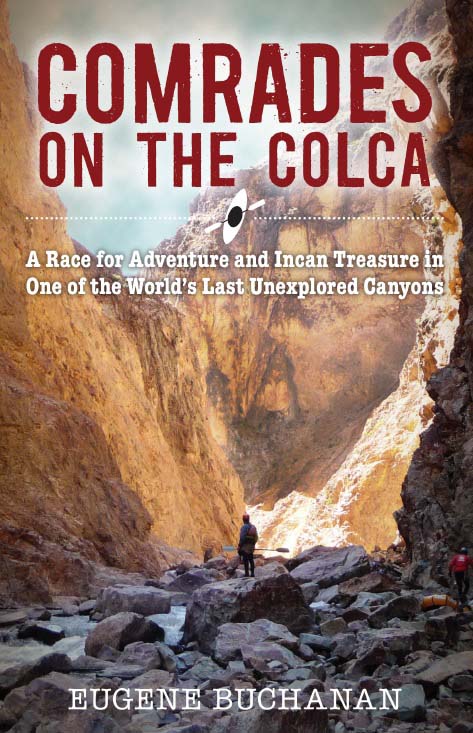 We managed to sit down with Buchanan between paddling expeditions and book signings to learn a little bit more about this latest adventure-travel non-fiction tome:

Gear Institute: Tell us how the new book “Comrades on the Colca” relates exactly to “Brothers on the Bashkaus,” which so many of us enjoyed reading?

Eugene Buchanan: It’s similar, in that again I found myself trying to get down some remote, hairball canyon with a group of hard-suffering eastern Europeans.

In Bashkaus, it was with a group of  Latvians known as Team Konkas on Siberia’s Class V Bashkaus River, one of the hardest rivers in the former Soviet Union. This time, it was with a group of Poles on a first descent of Peru’s upper Colca Canyon, billed as the deepest canyon in the world. On the Bashkaus, we were in a race against rations; the trip took about 26 days and we didn’t have a whole lot of food, save for the freshly butchered sheep we could get by trading vodka to gunned horseman. In Comrades, we were in a race with a rival team trying to beat us to the punch. I’m not sure how and why fate led me to end up in these wacko places with eastern Euros, sho are as tough as they come.

GI: What was the time span between the two books?

EB: Bashkaus came out in 2007, and Comrades is getting released by Conundrum Press in October, so about 8 years. I made my first trip down to the Colca with Yurek Majcherczyk in 2008, and then went back for a trekking expedition to the source of the Amazon with him in 2011. So it took a while to get all my notes in order.

GI: What was different for you writing “Comrades,” as an athlete, author, father?

EB: Comrades was tougher to write. Bashkaus was a 26-day river trip with super colorful characters and anecdotes, so it all came together pretty easily.

Without giving it away, this one was only about a six-day trip, so I had to tell a lot of related stories to get to the gold. But it has a lot of rich history I was able to weave in, from the Spaniards conquest of the Incas to a legend of hidden Incan treasure being scuttled away near Poland’s Dunajec River, which I also ran with Yurek.

As a paddler, the Bashkaus was much more difficult to run; it was pretty much big water, Class V, at one point taking us nearly two weeks to get through the inner gorge. And we were on homemade catarafts. On the upper Colca’s Cruz del Condor, it was more of a canyoneeering expedition with a lot of hiking, swimming, climbing and rappelling. But I was in my kayak, so I was able to run a fair amount of rapids. And the volume was a lot lower, maybe 200-300 cfs compared to maybe 10,000 cfs by the time we were off the Bashkaus. You wouldn’t want to be in that section of the Colca any higher.

GI: What was the hardest thing and the most rewarding thing for you in getting this book done?

EB: The hardest part was piecing together a storyline that flowed. I used our trip on the Colca as a setting to weave in history and a few of the other adventures and expeditions I’ve done in South America. It’s always hard deciding what to keep and what to leave out.

Comrades was also tough because I wanted to get input from the rival team as well, and they only speak Polish. It was a three-year project, so it’s gratifying to see it all come together. It’s funny because the only reason I felt I had to finish it is because I came up with the name, Comrades on the Colca, which seemed a natural sequel to Brothers on the Bashkaus. 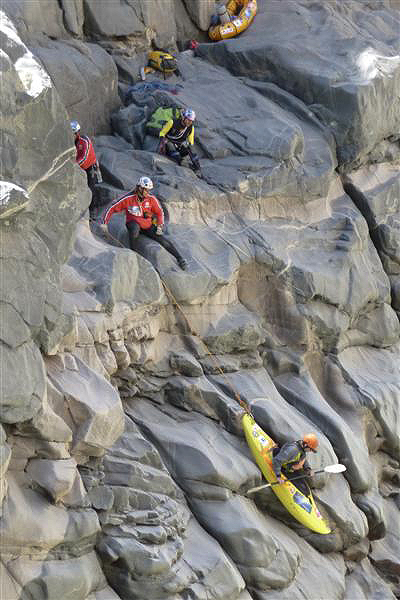 According to The Denver Post outdoors writer Jason Blevins, “These kind of adventure narratives too often descend into trip reports that simply convey the physical and mental drudgery suffered by the protagonist, with details of hunger, sleepless nights and endless risk. Not Buchanan’s Comrades on the Colca. His rich flashbacks to previous paddling adventures, like a fatality on the Rio Negro in Colombia, an exploratory mission on Ecuador’s Rio Quitos, and an ant-addled, jaguar-stalked, flood-ravaged descent of Peru’s Rio Tambopata—add penetrating perspective to his tale, lending it a depth that makes it an instant classic among legendary paddle tomes.”

An adventurer with several first descents to his credit, Buchanan’s passion for traveling, writing and paddling has taken him to more than 30 countries on six of the seven continents. A contributor to Men’s Journal’s The Great Life anthology, his first stand-alone book, Brothers on the Bashkaus, was released by Fulcrum Publishing in 2008. His second book, Outdoor Parents, Outdoor Kids, a winner of the Living Now Book Awards, was released by Heliconia Press in 2010.

A Business/Economics graduate of Colorado College, where Buchanan captained his NCAA lacrosse team, the former ski patrol, kayak instructor and sea kayak and raft guide has written for the New York Times, Men’s Journal, Sports Afield, Outside, National Geographic Adventure, Adventure Journal, Skiing, Ski, Powder, Backcountry, 5280, Bike, Mountain Bike and other publications. A member of New York’s prestigious Explorer’s Club, he is also the founder of Paddling Life.net. Buchanan lives with his wife Denise, and two daughters, Brooke, 16, and Casey, 13, in Steamboat Springs, Colorado, just a block away from the Yampa River.

Consumers can pre-order at: http://conundrum-press.com/comrades-on-the-colca-a-race-for-adventure-and-incan-treasure-in-one-of-the-worlds-last-unexplored-canyons/