Kicking back with Pneumatic Recovery Boots 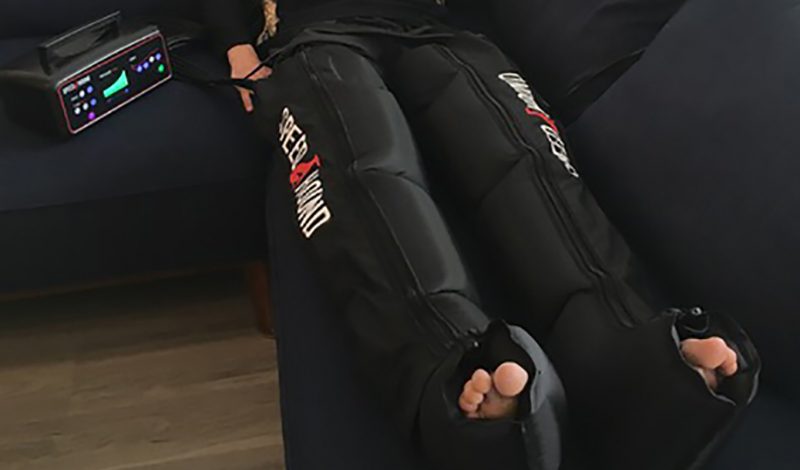 Pneumatic Recovery Boots are becoming increasingly popular among athletes. These boots treat muscle soreness and aid in the recovery process by increasing fluid circulation throughout the extremities. Word of their effectiveness is getting out as most brands are presenting their products at race expos, and top athletes are posting pictures of themselves wearing these boots on social media. Myself, I’ve never had the opportunity to try them until this past fall. A professional marathoner friend let me try her NormaTec Pulse Recovery System boots for two months. Simultaneously, I also tested Speed Hounds’ ProPerformance Recovery Boots System. This was an interesting comparison because both systems claim to do similar things, but they are in two different price categories. 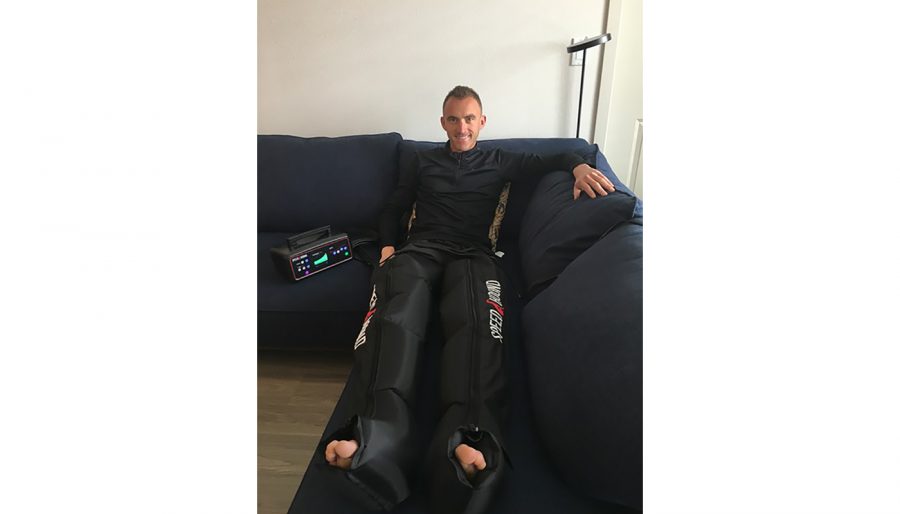 There have been numerous studies on compression, and even some on these types of systems. Whether or not these systems and compression actually work is still up for debate. Many of the studies have a small sample size or an inadequate amount of intervention, making it hard to draw meaningful conclusions. My review is based on two competing brands and my thoughts on the Pros and Cons of each unit and how they made me feel like an elite marathon runner. I tested each unit by alternating the use of each, one day, and the other the next. This rotation led to equal use of each unit following more difficult bouts in training, i.e. long runs, tempo runs, intervals, etc. The total head to head test lasted 8 weeks.

Each system is identical in the setup: step into the boots, plug the boots into the unit and sit back and let the boots do their thing. Here is where things are different between the two units. Let’s start with the two types of compression: peristaltic compression and sequential.

The NormaTec system utilizes a peristaltic compression system to transport fluid out of the limbs. What this means is that it focuses on one of the zones at a time. One zone comes on and pulses and then holds. The second zone then pulses and then holds and so on until the five zones have been reached. The Speed Hound on the other hand, utilizes two different functions in its A and B settings. Setting A is a peristaltic compression feature like the NormaTec, and Setting B is what is known as a sequential compression, which means the compression comes on and holds until the end of the cycle. The sequential compression provides benefits by accelerating the cycle without any backflow through the extremity. It essentially squeezes and pushes up repeatedly until the cycle is complete. Peristaltic mimics what your body naturally does. Some athletes have said they feel that sequential mode gives them a faster and more complete flush. Whether true or not, it’s nice to have the option. 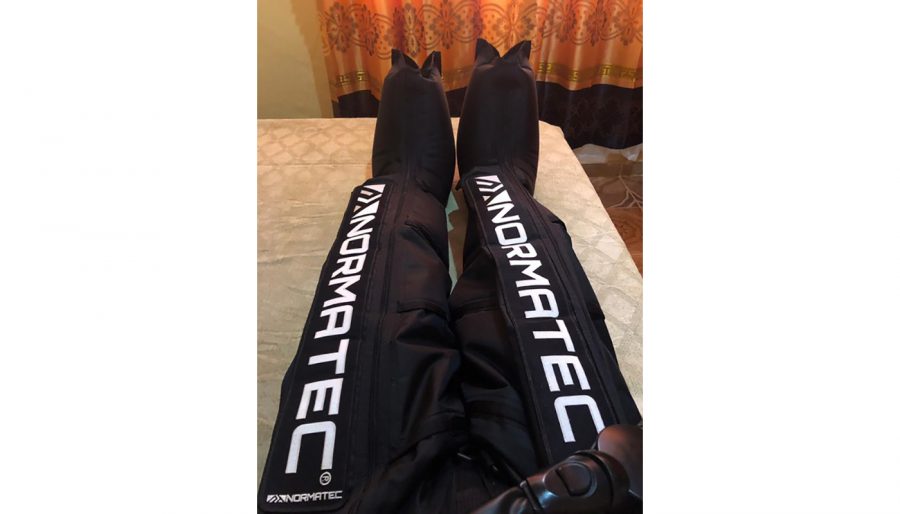 Besides having the ability to toggle between zones, the Speed Hound, unlike the NormaTec, allows for targeted zones. This means if you just want to focus on your calf area, you can just turn on that specific zone. The four zones of the Speed Hound are customizable, so you can select individual, a combination of, or all zones during your treatment. This could be a valuable function if you want to avoid a certain part of the leg due to an open wound for example.

Other differences between the units are in the Pressure Range. NormacTec has a pressure range of 30-110 mmHg versus the Speed Hound at 20-250 mmHg. As one becomes used to the pressure, they can usually take on more compression. 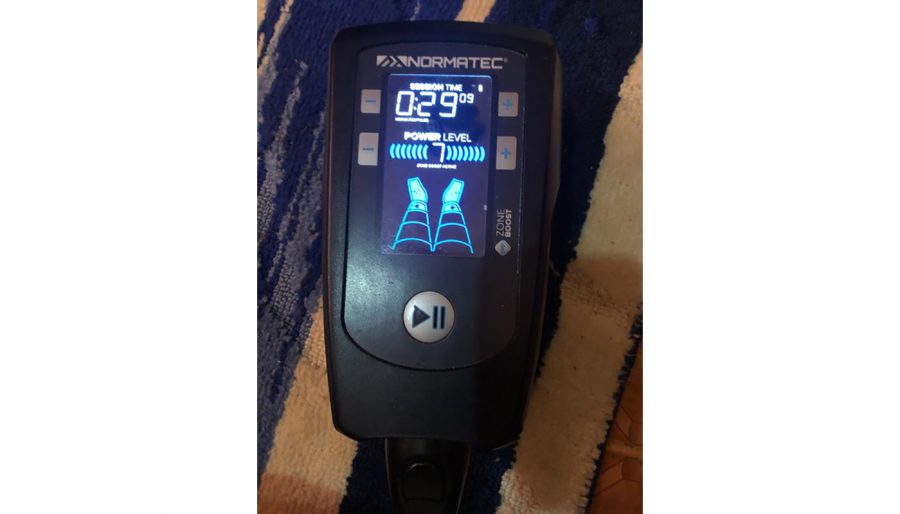 The NormaTec is the only unit on the market with a built-in battery whereas the Speed Hound must be plugged into a wall outlet, though one can buy a nice aftermarket rechargeable battery pack if this functionality is critical. Since I used the two products while sitting on my couch near an outlet, this wasn’t an issue.

Another important factor is the noise level. Both brands have a similar noise output, with NormaTec taking the upper hand, but only just slightly. I found neither unit to be obtrusive. For example, I was able to hold normal conversations on the phone, watch TV without having the volume turned up abnormally high and could talk at normal conversation levels. Neither brands were problematic in this area, in fact, the sound of each is rather relaxing. 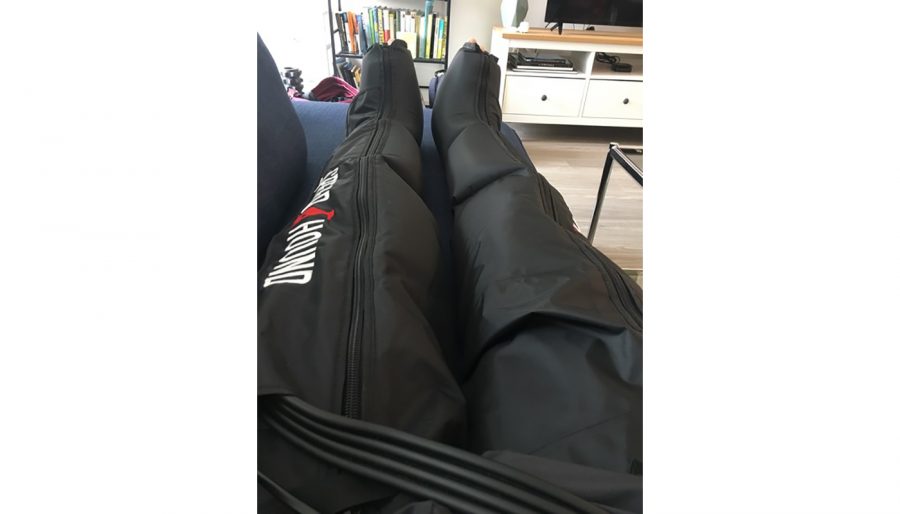 These units are incredibly similar, but they do differ, starting with compression. Comparing the sequential compression setting on the Speed Hound and the NormaTec, I noticed no discernable difference between the two. Both units are incredibly effective and do aid in my recovery. My legs definitely feel better after using each and I recommend this type of recovery. The big difference is that Speed Hound offers zone targeting but that is missing in the NormaTec. This is helpful for targeting specific muscle groups and focusing attention on these groups for as long as needed. The Speed Hound wins in this category.

Aside from the built-in battery and the arm and hip attachments, I don’t think the Normatec is worth the extra money. If you’re in the market for a recovery system, consider the Speed Hound. Based on my own experience, the use of compression boots allowed me to recover better, feeling fresher, reduced swelling, and I was able to do two a day runs with fresher legs. As a competitive runner, these benefits carry a lot of weight in my opinion.