How to Upgrade Your Apple Watch for the Outdoors 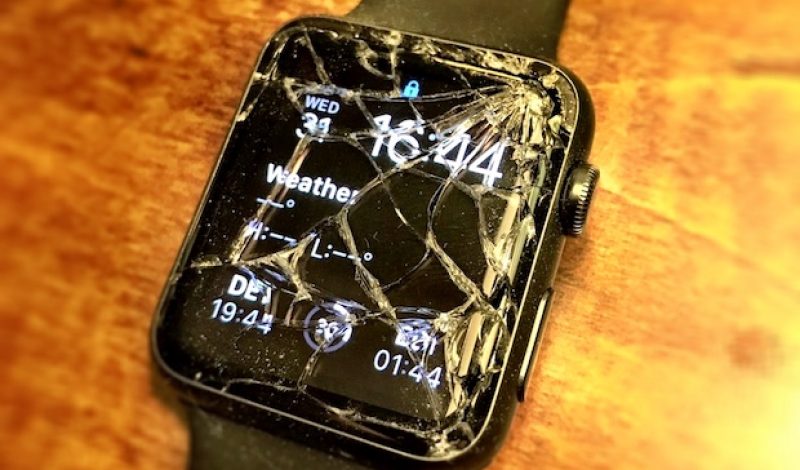 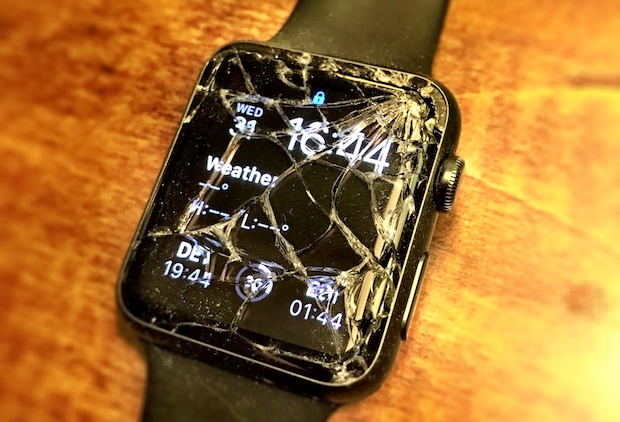 For all of the great things it can do, the one thing that the Apple Watch isn’t ready for is a life in the great outdoors. Even the newer Series 2 Apple Watch, which boasts an ISO 22810:2010 waterproof rating, still isn’t meant to be rocked and rolled in the outdoor world. With hundreds of thousands of units sold, and with millions of outdoor enthusiasts on the planet, the law of averages supposes that there’s a fair amount of us who also own Apple Watches, and undoubtedly there have been more than a few that have been destroyed on an outdoor adventure.

A while back, I was talking with a good friend who covets his Apple Watch. I asked him if he wears it outdoors and if he worries about it getting damaged. His response was quick and to the point: “I would never consider wearing it out hiking or biking.” For a watch that doubles as a fitness tracker (amongst other things), this just doesn’t seem right to me. So it got my gears cranking and I did a little research – partly to help him out, partly because I’m considering buying an Apple Watch, and partly because I want to help all of you who may be struggling to use that watch everywhere that you go, including the backcountry.

A couple of weeks ago, I borrowed an Apple Watch, picked up a few accessories for the watch that I had been researching, and tested out the upgraded build in a variety of situations and environments. Things like: digging in the dirt with the kids, getting wet and muddy down by the river, out in the workshop, and trekking through the woods on a rainy day. The end result is an upgraded, dare I say ruggedized – Apple Watch that I would feel more than comfortable wearing every day, in any situation. No, this doesn’t address the watch’s limited battery life, but you’ve probably adjusted to that curve if you own one anyway. Instead, I focused on improving the durability and waterproof-ability of the Apple’s high-tech timepiece while trying to preserve a look and feel that is suitable for all the places your day-to-day life may take you. 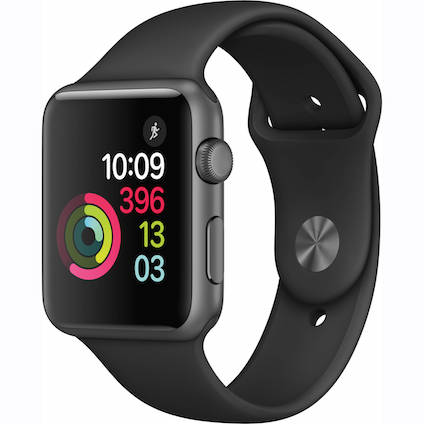 The big difference between the Series 1 and Series 2 Apple Watch is that the Series 2 is water resistant up to 50 meters and it feature built-in GPS and GLONASS. The Series 1 is splash resistant and meets IPX7 standards (which means it can get wet but can’t be submerged). Apple is still currently selling both with the Series 1 coming in about $70 less than the Series 2 when comparing “Sport” Models. If you don’t need GPS (which is a drain on the battery), the following recommended products will have a greater impact on your Apple Watch experience. However, both watches will ultimately benefit from these accessories. 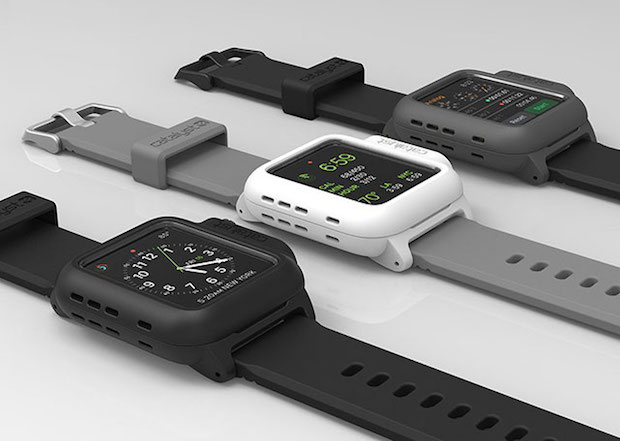 Though the case on both series’ of watches is aluminum and plenty durable, the sleek design of the body leaves the Ion-X glass, which is more durable than standard glass watch faces, susceptible to scratches and cracking, just like your iPhone. The Catalyst case is made from impact-resistant polycarbonate and encompasses the watch fully with an internal waterproof seal. A low-profile bumper on the front of the case recesses the Ion-X glass face so that it’s not out there waiting to be smashed. Additionally, the Catalyst case makes the Series 1 watch waterproof down to 50 meters, and the Series 2 watch waterproof down to 100 meters. This is pretty substantial when you consider that in both situations this improvement meets or beats industry standards for rugged sport watches in general. 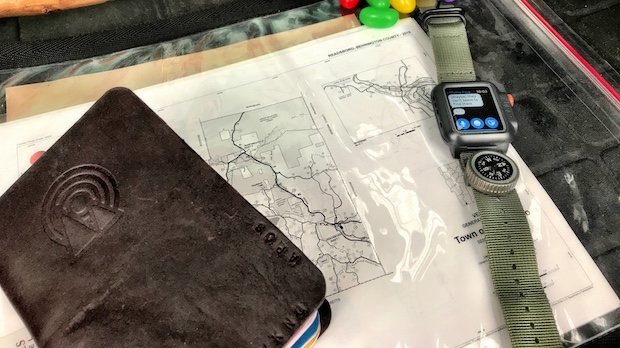 The Catalyst Case comes with a rugged silicone band which is a substantial upgrade from the Apple Watch band, but it might be too bulky for folks trying to blend a lifestyle that melds both work and play. That said, Da Luca Straps offers a variety of modern and tactical band solutions for the 38 mm (22mm band) or 42mm (24mm)  Apple Watch.

No matter which one of these you choose, in order to retain the full fitness sensor function of the watch, you’ll need to go with a two-piece band. 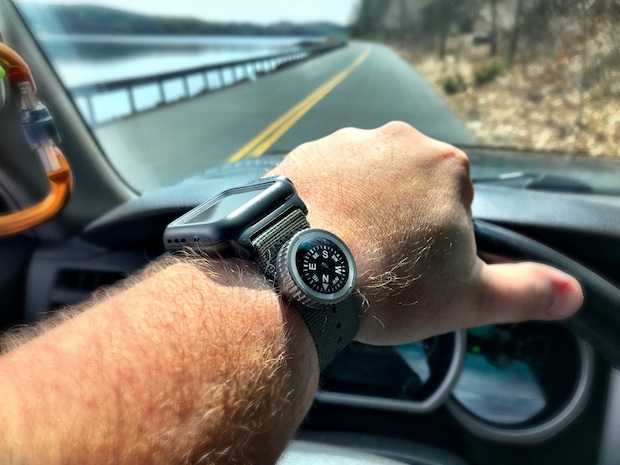 Yes, there is a compass on the watch already (and GPS on the Series 2 versions!), but if you want to preserve battery life while looking like a badass in the outdoors, the Prometheus Design Werx Expedition Watch Band Compass Kit Ti is the way to go. Water resistant down to 100m, this built-to-last, glow-in-the-dark, oil-filled bubble compass is cased in titanium and relies only on the Earth’s natural magnetism and your ability to read a compass to be employed on your adventures. What’s more, when it’s time to head into the office, the compass slips off of the watch band and into its own (included) silicone case to be hung from your pack or zipper pull.

THE MATH: What’s all this going to cost me?
After investing $300-400 on the watch itself, these recommended accessories will cost you an additional $200 on average. So, all in, you could be looking at a $500-600 for the Apple Watch in an “outdoor configuration”. This is still cheaper than having to replace the screen or have the watch replaced (even with insurance). 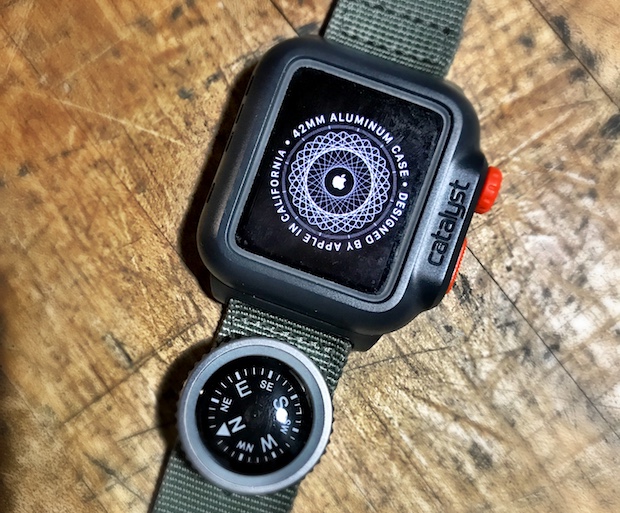 After spending a considerable amount of time testing out the aforementioned configuration I stand behind these two conclusions:

1. Without these modifications, the Apple Watch will never make it in the outdoor world. It’s not designed for those types of adventures. Even the Series 2, with its upgraded waterproof features can’t handle a beating.
2. Based on all of its stellar features and ease of use, the Apple Watch is an addictive guilty pleasure. These upgrades only make it more desirable.

I’m still a little taken aback by Apple’s major shortcoming with these watches – an 18-hour battery life? Really? You couldn’t eek out a full day at least? But that aside, the Apple Watch is a great companion for an iPhone user looking to streamline their experience and add function to the phone both directly and remotely (like being able to change the music on your iPhone with the watch while the phone is plugged into an external speaker forty feet down the bar at the awesome brewery you’re moonlighting at as “The Cooler.” ) 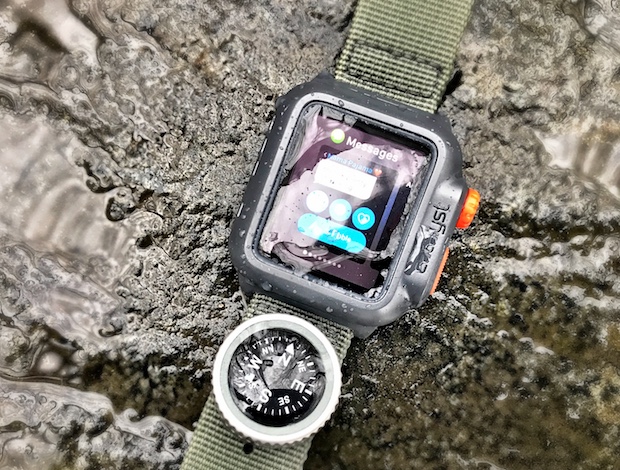 That said, owners of the Apple Watch and perspective buyers lured in by its appeal, are likely to find that Apple’s gadget is totally worth it (buy the ticket – take the ride). But just like with an iPhone, it is your responsibility to protect your investment and keep it safe from harm. The Apple Watch isn’t cheap and is susceptible to damage in day-to-day use. But with these optional upgrades, it becomes better equipped to accompany us on our adventures.

In terms of functionality, there isn’t another smartwatch on the market that pairs as well with the iPhone. Most of the top end smartwatches have been designed to work with Android operating systems and don’t add much of anything in terms of ease of use or functionality for iPhone users. If you’ve taken the leap to invest in an Apple Watch and you live the vida loca in the weird and wild outdoors, take these recommendations into consideration. The base watch is an upgrade in ease of use and functionality and these accessories are in upgrade in durability and protection from the elements. It doesn’t hurt that they look cool as hell riding around on your wrist all day either.