Head to Head: Thule vs. Yakima 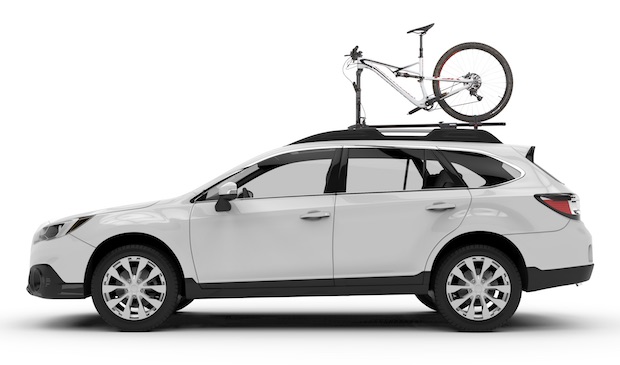 Thule and Yakima are the Pepsi and Coke of the rack world. These rival brands dominate the market, and each has its devotees. So I decided to turn my rack into a mixed case: With Yakima’s razzle-dazzle bike tray mounted alongside fresh produce from Thule, I set out to see which of these powerhouses deserves the champion’s crown.

The contenders: The Yakima ForkLift ($159), a universal fork-mount bike rack that attaches to virtually any crossbar—round, square, or factory-installed. And the Thule ThruRide 535 ($220), a fork-mount that also fits round, square and factory crossbars—and accommodates bigger, 12mm-22mm thru-axles without the need for a sold-separately fork adapter. I tested both bike trays on two vehicles: Roof-mounted to a Subaru Impreza fitted with square Thule crossbars, and on round crossbars mounted vertically to the backside of a Four Wheel pop-up truck camper.

Adaptability
Both racks work with a variety of crossbars, which is ideal if you move racks from car to car (or if you anticipate selling your vehicle but keeping the bike mount for your next one).

Like most fork-mount racks, the ForkLift easily secures road bikes and 9mm quick-release mountain bike hubs (thru-axle designs require the use of an adapter, such as Hurricane Components’ Fork Up). The ThruRide, meanwhile, makes transporting thru-axles marvelously easy.

Thule’s website claims that the rack “fits the complete range of thru-axle diameters without needing adapters,” which is mostly true: No adapter is needed for thru-axles measuring 12-22mm. But you’re out of luck if you run the extra-wide RoxShox Bluto fork, which isn’t compatible with the ThruRide. And some of my wheels use the old 9mm quick-release hub—which does require an adapter (included with the rack). So the ThruRide is wonderfully versatile if you (and your posse) ride thru-axle mountain bikes, which are, admittedly, now more common than the former 9mm standard. But it’s inconvenient if you’ve got an old-schooler or road biker in your midst.

Ease of installation
Neither rack requires tools for installation, which streamlines the process for both.

The ForkLift attaches to the crossbars by opening the clamp’s jaw and snugging it to the bar with a T-screw (on the front attachment, a plastic sleeve slides over the T-screw to prevent it from loosening in transit).

The ThruRide is even easier, clamping to the crossbar using a Quick Flip bracket that acts like a cam lever. Once it’s attached to your crossbars, it’s very easy to move the rear wheel chock to fit the bike, because it can slide into any point along the tray. The same can’t be said of the ForkLift, because the (rather large) crossbar attachment wraps around the tray, forcing you to place the wheel chock in front or behind it. If your crossbars happen to be spaced so that the rear wheel falls directly on the crossbar (as my bike did), you can’t secure the wheel to the rack. I had to jury-rig it with a bungee cord.

But I also encountered two downsides with the ThruRide: The clamp nicked my thru-axle, imparting cosmetic damage that doesn’t seem to compromise the axle’s functional integrity—yet isn’t what I want to see on a big-dollar bike (Thule reports that it’s addressing this problem by coating the surfaces with a Rilsan nylon layer). And because that fork clamp is unusually wide (almost 6 inches across), it may not fit on your crossbar’s available space. In my case, the ThruRide just manages to squeeze between my cargo box and the end of the bar.

Bike security
I used both racks on the rough 4WD roads in the Maze district of Canyonlands National Park, and can attest that they did an admirable job of holding bikes securely: Nothing loosened after hours of jostling, and nothing damaged the bike frames or parts. The racks also held firm at highway speeds (75 mph), even with additional wind gusts registering 40 mph. I’m confident in the strength and security of both. 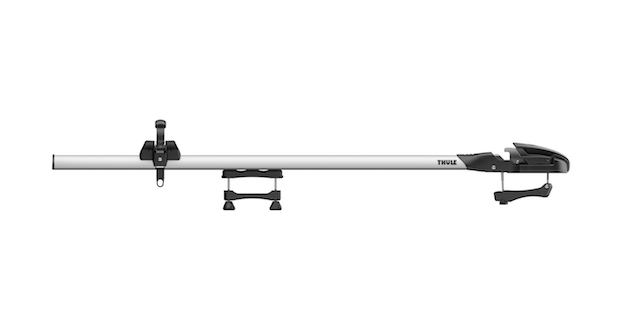 What about locks?
Neither rack comes with locks, but you’re definitely going to want them. Both brands charge $60 for a four-pack of locks. The Yakima system is pretty standard: The lock prevents you from opening the lever that secures the fork.

But the ThruRide is novel in that it solves the security problem that most thru-axle bike owners confront with all other fork racks (which don’t prevent someone from simply unscrewing the axle and walking away with your bike). The lock on the ThruRide actually keeps the fork clamp closed to foil potential thieves.

The winner
If you’re a road biker, you’ll want the Yakima—and it’s a sweet rack. But for innovation and ease of use, Thule takes the trophy. It’s super-simple to install, provides a locking mechanism for thru-axles, and secures the rear wheel no matter where it lands on the tray. For that, it ranks as this test’s champion.

For more cycling gear reviews check out our bike page.