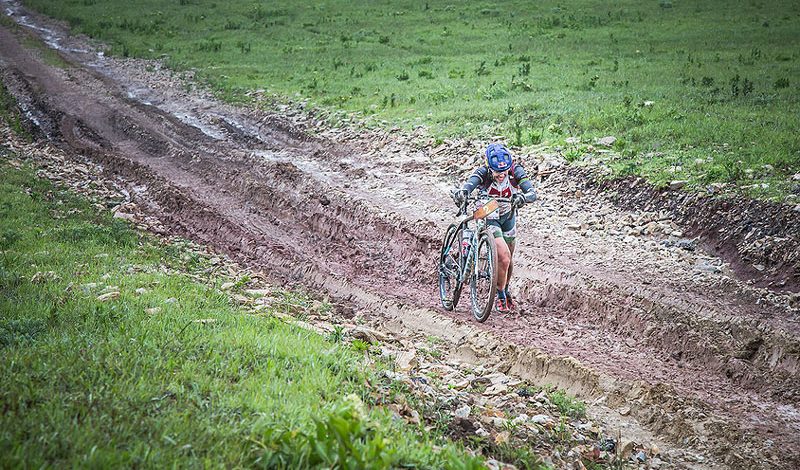 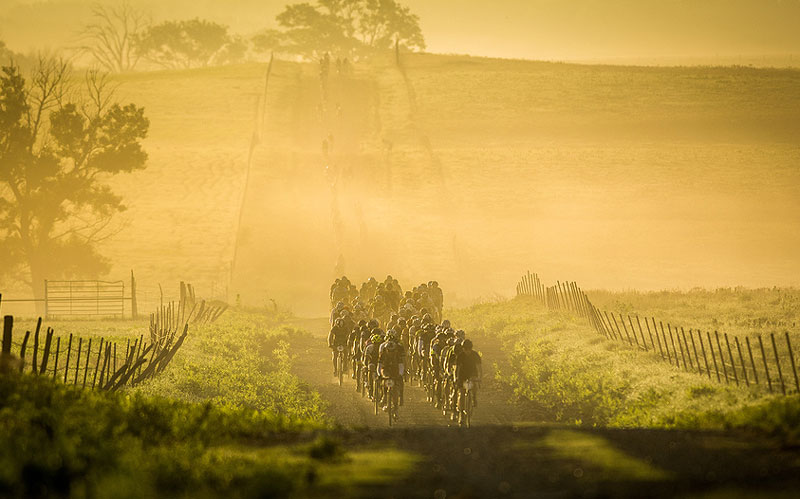 Photo courtesy of the DK200

If you haven’t heard of The Dirty Kanza, or DK200, don’t feel bad. Just 12 years ago in 2006 only 34 riders showed up to participate in this grueling test of endurance on two wheels. This year, 2,200 people showed up to race on the gravel and dirt roads around the Flint Hills of east-central Kansas, in a seminal event that now takes place the first Saturday following Memorial Day each year.

The race began as a 200-mile figure eight beginning and ending in front of the historic Granada Theatre in downtown in Emporia, Kansas, and now also offers a 25-mile, 50-mile and 100-mile option, opening up the event to a much broader spectrum of rider.

Event organizers say they are trying to make Emporia not only the “Bicycling Capital of Kansas,” but also the “Gravel Grinding Capital of the World,” capitalizing on a trend that has been pumping new life into a beleaguered bike industry for the last half dozen years. They’ve likely succeeded, with most racers in agreement that the Dirty Kanza 200 is the world’s premier ultra-endurance gravel road cycling challenge. 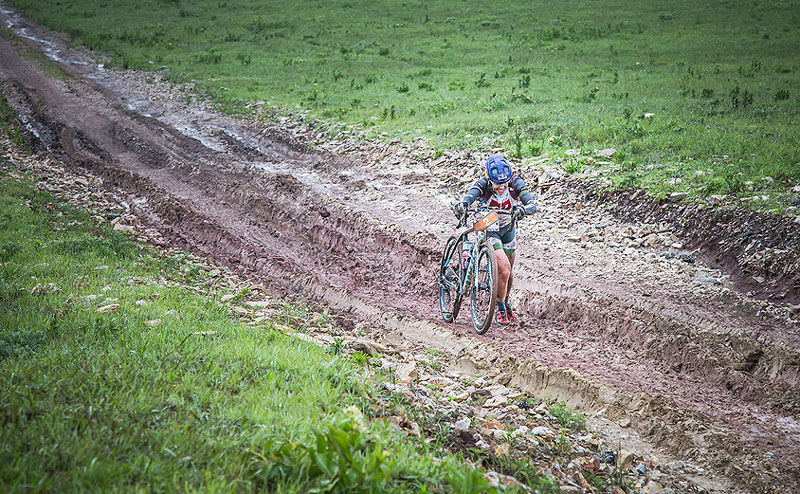 Photo courtesy of the DK200

“Gravel is definitely developing its own scene, but a lot of the coverage seems to be coming through cyclocross outlets like CX Magazine,” says Chris Baddick, a guru for all things bike and an account manager at Thorpe Marketing in Boulder. “Mat Stephens, who won this years DK200, is a pro roadie when he’s not racing gravel. Jake Wells, who came second, is a pro CX racer. Menso de Jong who was third is a pro mountain biker. Kind of awesome that it played out that way. CX was supposed to be the off-season sport for roadies, but it’s now big enough that perhaps it’s developed its own off-season pastime in the form of gravel.”

There was also a record 200 women racing this year in the 200 mile open field, including Boulder’s Heidi Rentz, a professional cyclist, coach and co-owner of The Cyclists Menu.

“It’s that special feeling similar to riding a mountain bike…trees, peace  and quiet, that place between rocks and dirt, no cars. Gravel biking takes you deep into the woods much more swiftly than a mountain bike does though. The opportunity for adventure is endless on a gravel bike and we’ve only just touched the surface of what more it can offer,” Rentz said.

Rentz has competed in many shorter distance mountain bike races, a few longer ones, off-road triathlons and marathon-distance trail running, but, she told the Gear Institute, “There was no way I could wrap my head around what I was actually about to do out there during those 200 miles. Heat reaching 90 degrees, 85 percent humidity, head winds, long lonely sections of digging deep, fast painful sections in an attempt to hang onto a pack… pure jaw-dropping stunningly beautiful Kansas. If you’re someone who truly loves to ride your bike, if you are a true soul rider, this event is a must-do for you.” 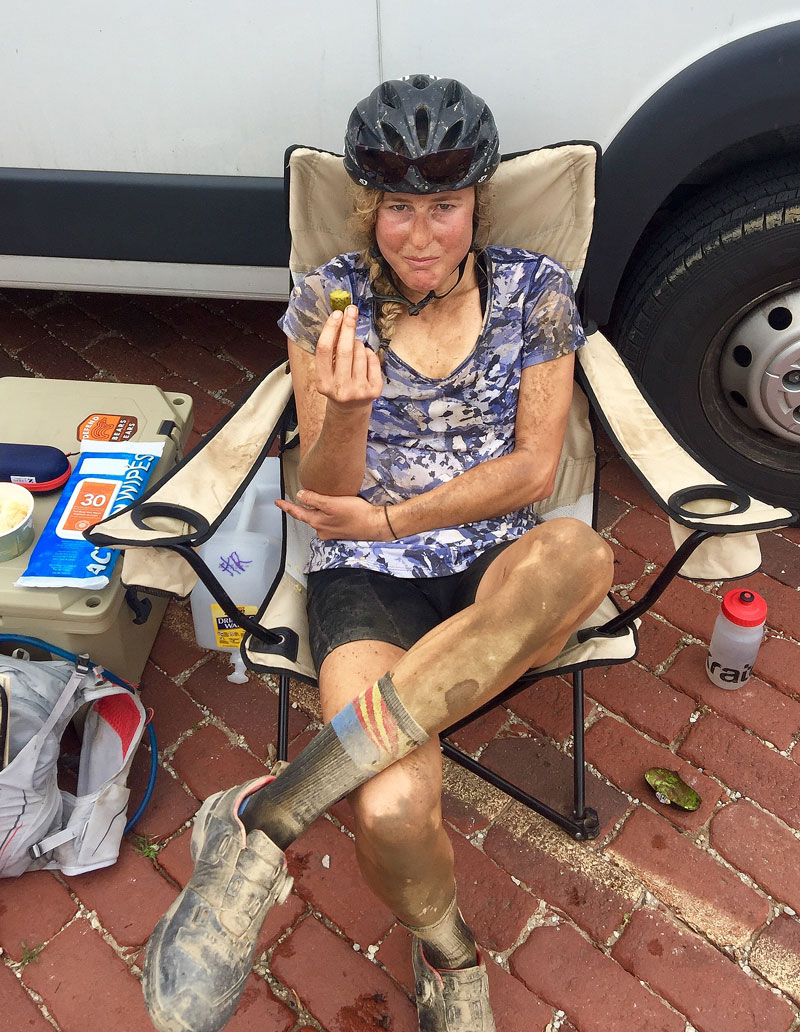 Photo courtesy of The Cyclist’s Menu

Zander Ault and Rentz co-founded a gravel-bike focused business called The Cyclist’s Menu last year where the power couple hosts cycling camps south of Tucson, Arizona, all winter long. They have 10 camps from January to April in 2018; Mallorca, Spain, road camp in the spring; Colorado camp in the summer; and Mendocino, Calif., in the fall. The Arizona camps welcome a variety of riders: some are training for events like the Land Run 100 and The Dirty Kanza 200, and some riders are just up for a life-changing adventure on the bike. “Everyone who comes to camp with us always has at least one thing in common: the desire to be outside on the bike all day and eat food!,” Rentz said. “Zander (aka, Chef Z) is our in-house chef prepping three meals daily and does his best to source all our food as responsibly as possible, making sure that nearly 90 percent of our meals are local to wherever that special location is that we choose to adventure in.”

“If you have access to good, rugged, hard, gravel road rides in your backyard, I believe it would be very difficult not to fall in love with the sport,” Rentz says of the gravel bike trend. “There are so many good gravel bikes out there to adventure on. Chef Z and I ride an Ibis Hakaluggi and we can pretty much do anything on them, hell, we can even mountain bike on these babies and we do it regularly. Our Kappius Components (out of Boulder) and wheel set has allowed us to float through rough terrain, we’ve been blown away by them.”