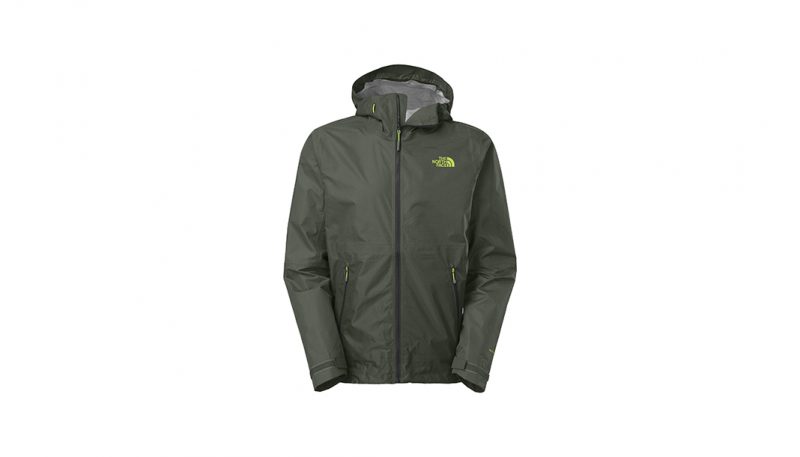 With the most advanced use of materials in this test, TNF has a way of weaving different properties into the same piece of fabric. Known as FuseForm, it allows for a jacket that’s biomapped for efficiency with fewer seams and stitches. Translation: a slick, small packing, bomber shell ideal for backpacking.

Weathershedding
FuseForm is TNF’s own 2.5-layer membrane. High wear areas are woven with tougher nylon yarns. These not only add punch to durability but also to longterm watershedding. Different attributes in one piece of fabric also means less seams overall. Then they fuse the seams rather than sew them. This creates fewer holes in the membrane and thus fewer weak points for water to wick through. The helmet compatible hood has hidden draw cords that pull it snug, no matter what we had on our head, and never restricted visibility, moving with our head turns. Overall it is a very solid feeling jacket.

Breathability
Air permeability is surprisingly good for a 2.5-layer shell. In sweatier areas TNF used the Fuse Form process to build in more breathable zones. While moving hard in humid conditions we didn’t get as sweaty as we expected.

Function
We already mentioned the great hood. TNF also took care with the position of the hand pockets, keeping them out of the way of pack straps.

Durability
Mixing different materials in the fabric helps boost toughness where it’s needed. A sea kayak guide living on Vancouver Island’s drenched west coast made this his go to jacket. Two months later he was still loving it.

Packability
Fused seams means less seam-tape and thus, less bulk. The jacket’s already a respectable 12 ounces, but it packs smaller than other jackets of similar size and weight. 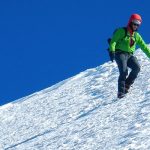 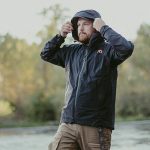 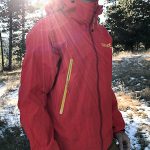