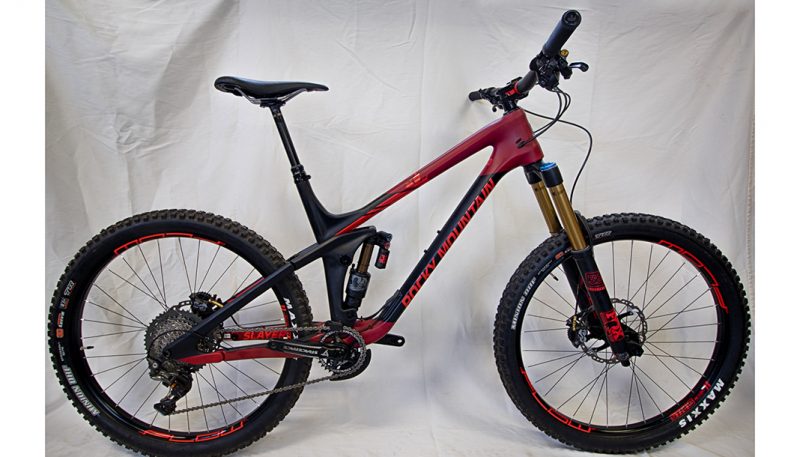 The Rocky Mountain Slayer 790 MSL descends with the best of them, but also adds excellent all-mountain/trail capability to the mix. It could easily double as your go-to enduro race bike and all-mountain bike if you insist on a quiver of one.

RIDE QUALITY
With a 170mm pinch-bolt Fox Factory 36 on the front and a Fox Float X2 EVOL on the rear, the Rocky Mountain Slayer 790 MSL was made to be hucked off anything you can find. I found myself unnecessarily manualing off of most obstacles I encountered and hitting the bigger drops and jumps faster. Uphill technical climbing was surprisingly efficient allowing for dabless ascents of steeper single tracks. The short chainstays kept the rear wheel stuck to everything, and wheel slip was rarely an issue. Downhill, this bike is quick and nimble, and the suspension did an amazing job of soaking up the big hits while keeping the rear end chatter free at speed. The Slayer comes with Rocky Mountain’s Ride-4 tech which can effectively change the headtube angle from 64.75º to 65.85º and the seat tube from 73.75º to 74.85º, without changing the suspension curve, in four increments, effectively giving you four different ride types. 1.1º might not seem like much on paper, but it made a difference changing the bike from a slack downhill beast to a singletrack specialist on the trail all with a turn of an Allen key. This versatility comes close to making the Rocky Mountain a do-everything bike, but don’t be fooled, this bike is downhill oriented first and foremost.

STIFFNESS-TO-WEIGHT/POWER TRANSFER
For the Slayer 790 MSL, Rocky Mountain uses rigid molds as the structure for laying up the frame with carbon fiber. This reduces the amount of resin and fibers needed resulting in a lighter bike. The company also mixed different types of carbon to optimize stiffness and impact resistance too. In the back, the four-point smoothlink suspension transferred power to the drivetrain surprisingly well for a large suspension bike, giving it great acceleration, especially when the suspension was in the steeper option. At 29 lbs, the Slayer is a both stiff and light for an enduro model. The bolt-on 20mm boost front hub adds extra stiffness to the front end taking the fear out of high-speed technical cornering and rocky steps.

CLIMBING/EFFICIENCY
For an enduro bike the Rocky Mountain Slayer 790 MSL is great technical climber, which shouldn’t come as a surprise to anyone that has ridden the BC coast where they are designed. The short chainstays and steep seat tube angle allow you to climb in the saddle on steeper terrain reducing the need for energy-robbing, out-of-saddle climbing. For extra technical climbs you can steepen the head tube with the Ride-4 system. This keeps the front wheel down, and the Slayer will rival many all-mountain bikes, barring any out-of-saddle climbing—with the added bonus of extra suspension on the way down.

DESCENDING/HANDLING
The Rocky Mountain Slayer 790 MSL has a revamped smoothlink suspension that gives the bike a more traditional triple-triangle look than earlier models. That same 4-link suspension, performed flawlessly on the big hits thanks to the new Float X2 EVOL, allowing riders to pedal immediately after landing, keeping the speed up for the next jump. With a head tube that can be slackened to 64.75º, the slackest in the group, along with 170mm front forks, and a big 203mm disc on the Shimano Saint front brake, keeping the speed up is exactly what you will want to do. I did find the back end took a bit of tuning to keep the chatter out of the small stuff, but once dialed it died down quickly, especially when pedaling. The cockpit puts the rider in a comfortable position when riding downhill at speed, keeping the bars out in front and ready to manual the front wheel whenever needed. The Slayer lived up to its name when it came to obstacles, steamrolling over nearly everything in its path. The ability of this bike to handle itself on the big lines gave more than one rider the confidence to push themselves and ride faster on the trail.

COMPONENTS: DRIVETRAIN, SHIFTING AND BRAKES
The Rocky Mountain Slayer 790 MSL opted for a Shimano drivetrain with an XTR derailer and shifter leaving me yearning for the extra torque of the 50 tooth found on the SRAM Eagle cogsets. But shifting was flawless throughout the test, as would be expected from company’s top end group. The Shimano Saint brakes included the extra-large 203mm front disk. There was no faulting the stopping power, but the modulation could have a softer touch for precise feathering. Fox handles the suspension using a 36 Float RC2 Factory 170mm up front, with a pinch bolt 20mm boost hubset from Rocky Mountain. This made for one of the more solid front ends in the test. Rocky adds an E*Thirteen Bash chain retainer on the front as well. We’re not sure if that was necessary, but it never hurts—especially in really rocky descents. There is some noise from chain rub at the lowest gear, but it isn’t annoying. What is annoying is the RockShox Reverb Stealth dropper seatpost: This seatpost would pop up an inch or two unannounced once your bum was off the saddle, and the seat would drop back down once weighted again. We reached out to Rocky Mountain about this to discover if this is a known issue with some Reverb models this year. Regardless, it will likely be resolved by the time the Slayer hits the market. If not, it will be covered under warranty. 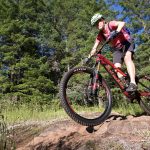 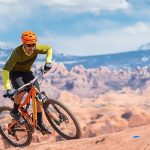