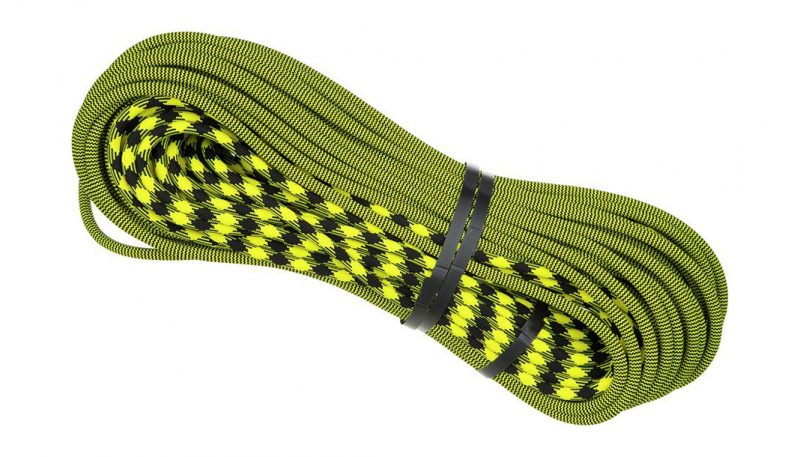 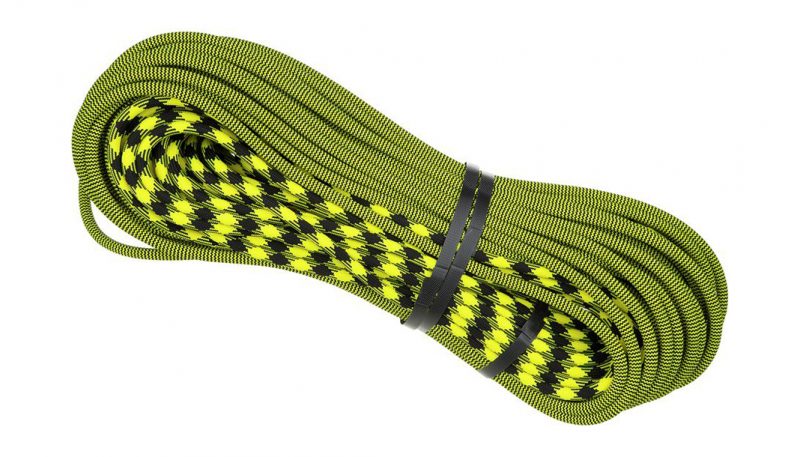 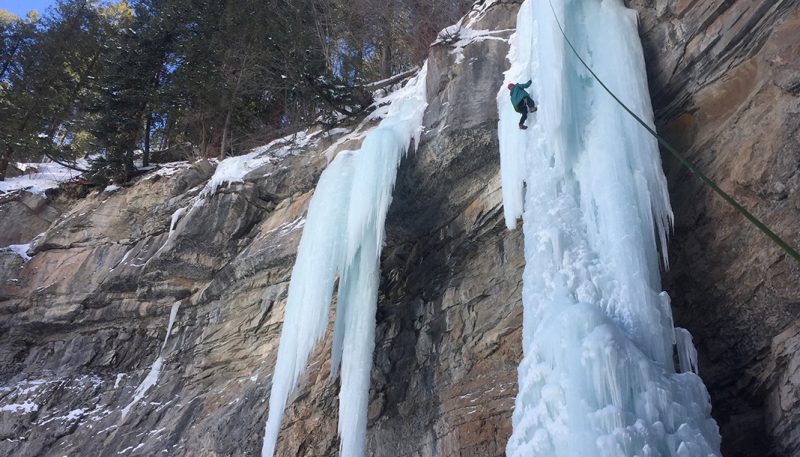 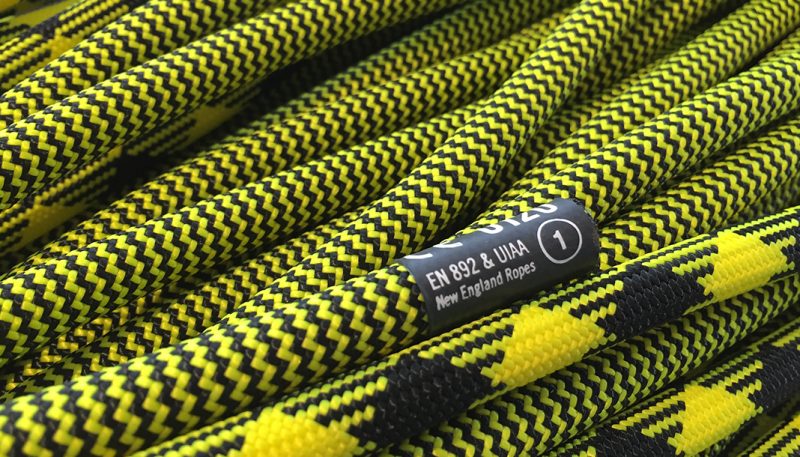 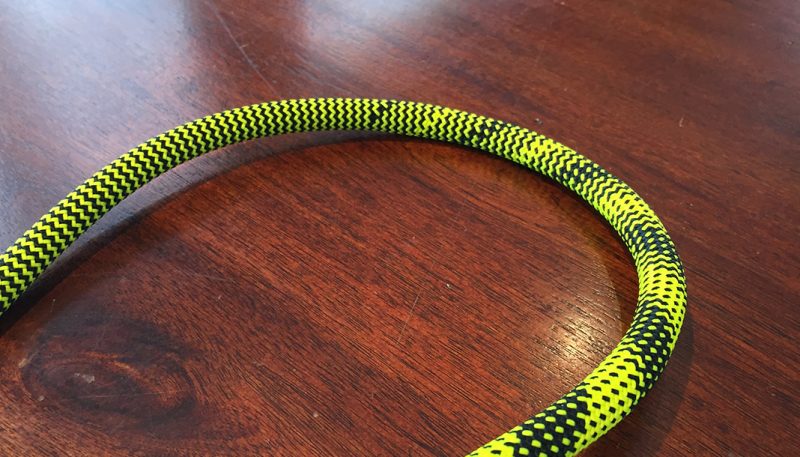 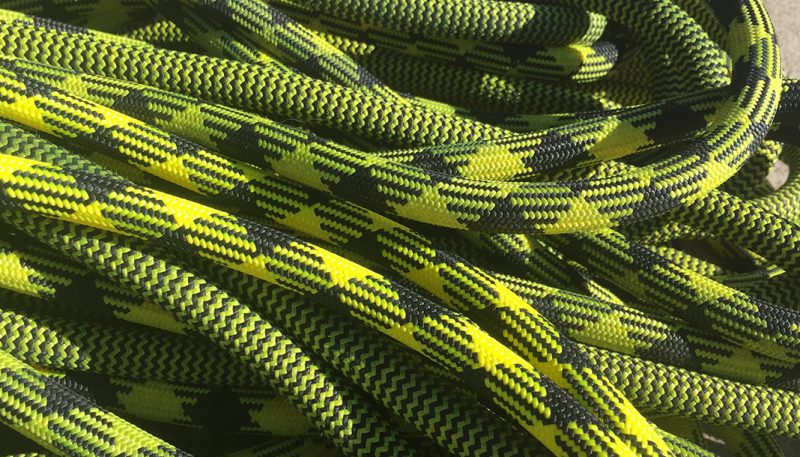 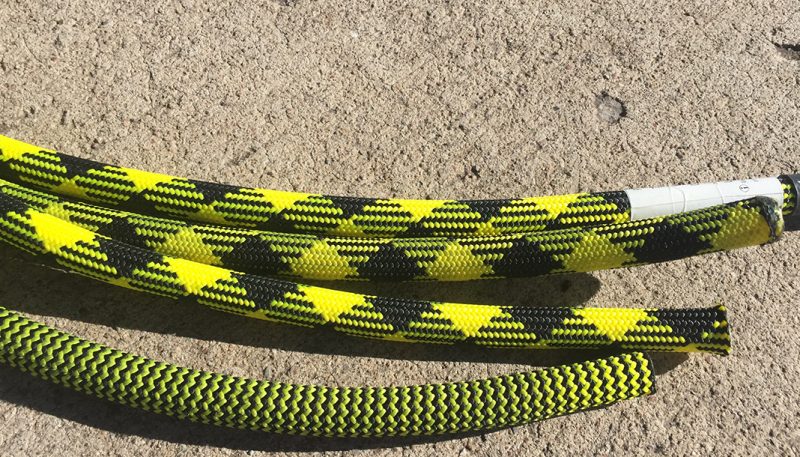 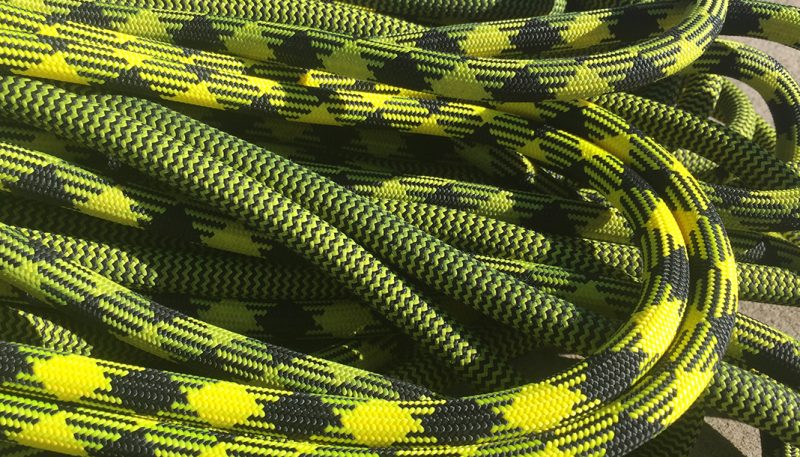 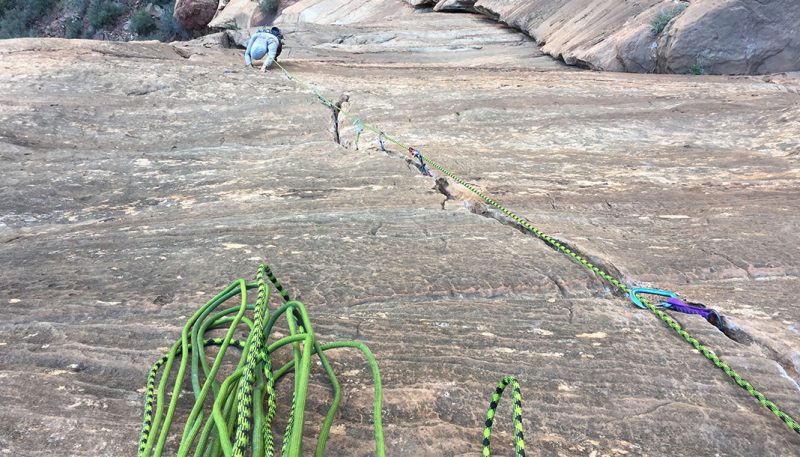 The Maxim Pinnacle Yellow Jacket is a versatile, durable dynamic single climbing rope with a bi-pattern, high-contrast color scheme that makes finding the middle of the rope easy. Maxim’s Endura dry treatment of the sheath and core work great for ice and alpine climbing and the tightly woven sheath is a little stiff but feeds smoothly for sport and trad climbing, making the Pinnacle a great all around rope.

Handling
The Maxim Pinnacle Yellow Jacket is built with a sheath that feels tight and smooth, thus allowing the rope to move with ease through gear and belay devices. The smooth handling while belaying is offset by the slightly stiffer feel than the other ropes tested. While not as stiff as its bigger cousin, the 9.9 mm Glider, the Pinnacle was stiffer than the more supple ropes tested, such as the Sterling Helix. Testers found it takes a little more effort to tie a small knot in the Pinnacle.

Resistance to Dirt
The Yellow Jacket version of the Pinnacle features a bright yellow that stands in contrast to the black threads also used. This “bee-colored” rope held up well to dirt that came a close second to the Sterling Helix. After much use and abuse, the Pinnacle’s color was dimmed, but not so much that its middle mark was hard to find.

Durability
The Pinnacle demonstrated great durability and was found to be one of the most durable ropes tested in this group. During in-house testing, the sheath started to show some wear with some fuzz that is commonly generated during the abrasion test and the core just started to show during the sharp edge test. The Pinnacle outperformed other ropes in both in-house tests. During field testing, the sheath held up remarkably well, showing scant sign of wear and the handling characteristics stayed true, maintaining its smooth running through gear and belay devices. Taken together, the Pinnacle performed slightly better in terms of durability compared to other ropes in this test.

Features
The Pinnacle features Maxim’s Endura Dry-treated Core and is available in a number of iterations with six color options to choose from along with bi-pattern versions and those with a 2X Dry treated sheath. The Yellow Jacket version of the Pinnacle that we tested is the bi-pattern version that also includes the 2X Dry treated sheath. The Yellow Jacket received particularly rave reviews from testers for the really effective bi-pattern color scheme that made finding the middle super easy. Some bi-pattern ropes have subtle changes to the color scheme and are less effective at locating the middle mark or they suffer as the rope picks up dirt or if the light is fading on late day rappel. This wasn’t the case with the Yellow Jacket as it was consistently easy to find the middle mark throughout its use.

Versatility
The Pinnacle represents a great option for a “quiver of one” rope and thus received the highest marks for versatility in this group of ropes tested. The rope’s excellent dry treatment of both the core and the sheath made it a great option for ice climbing and at 9.5 mm it’s just light enough that some will also find it effective at snow and alpine climbs. The great durability of the Pinnacle makes it really appealing to traditional climbers who want a tough rope and for those venturing into multipitch terrain. The high-contrast color scheme works great for completing multiple rappels. The Pinnacle’s stiffer handling made it a little less popular with testers seeking out a sport climbing rope but they did appreciate the smooth feed through belay devices and while clipping. 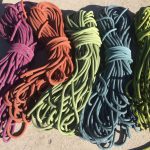