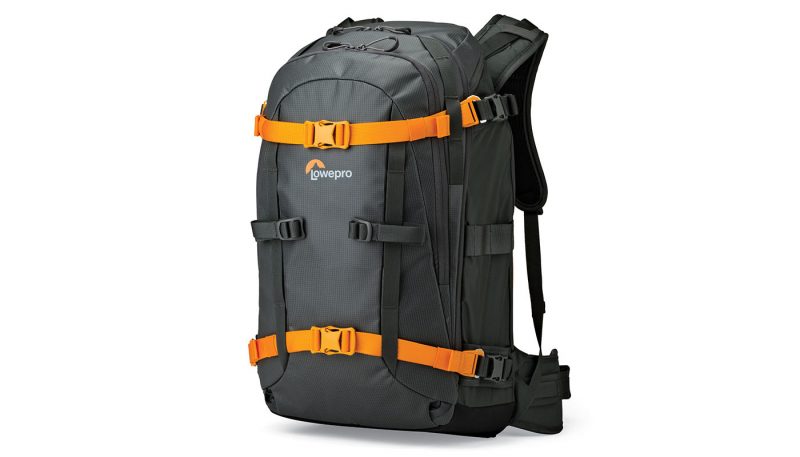 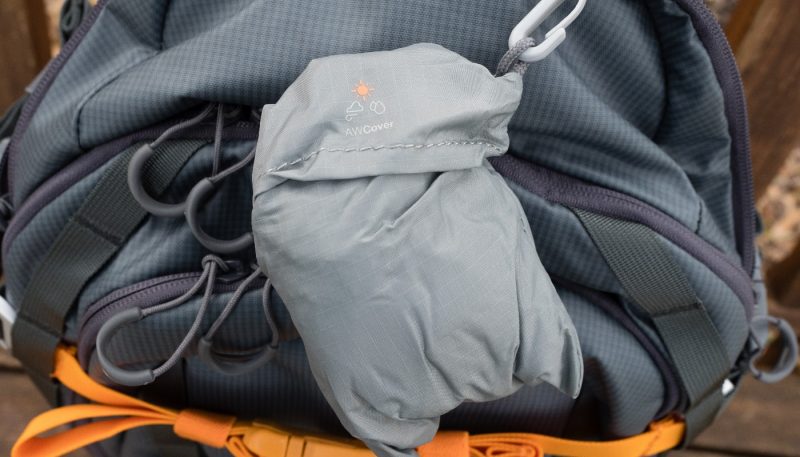 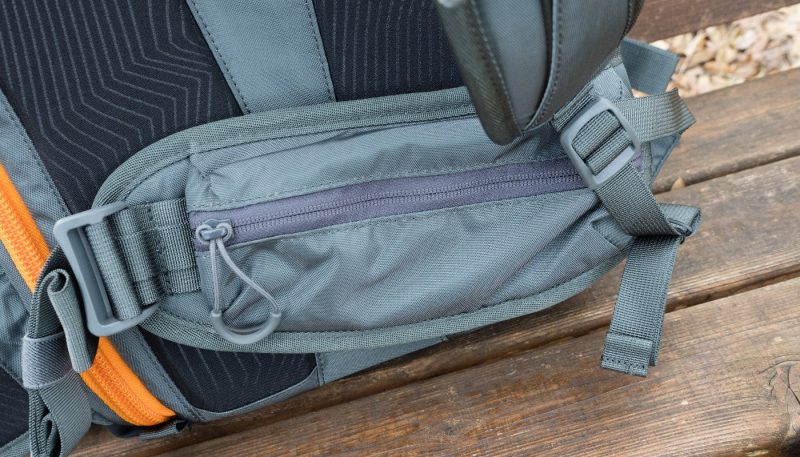 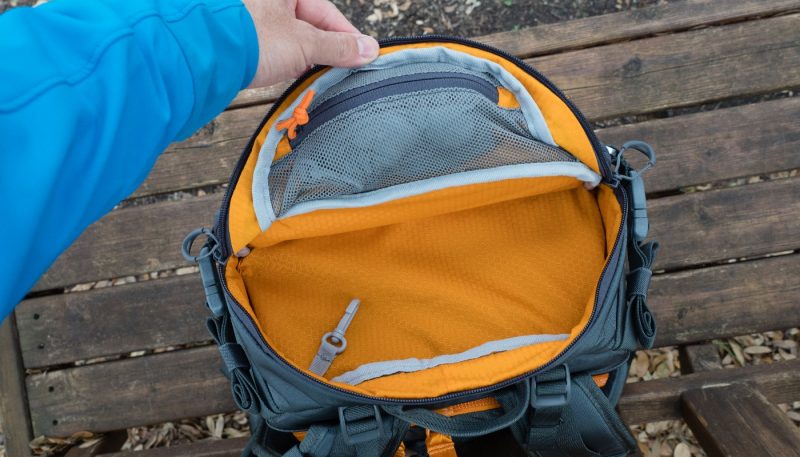 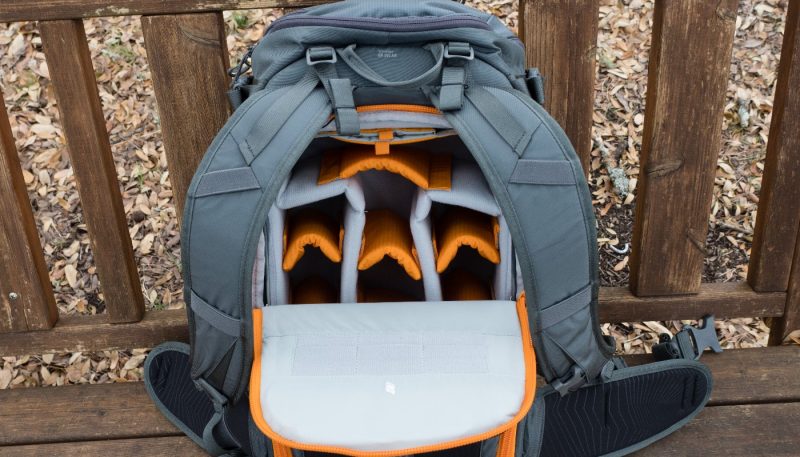 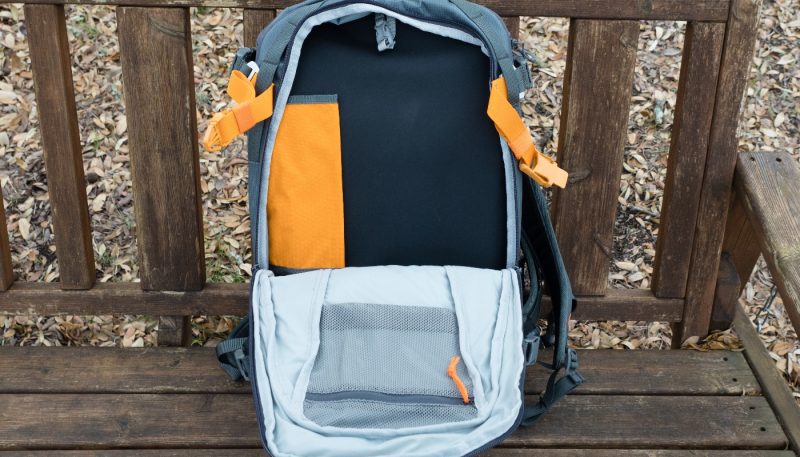 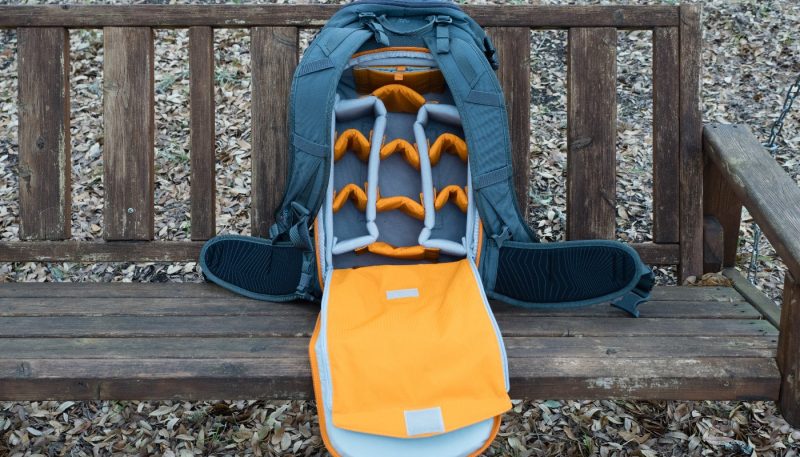 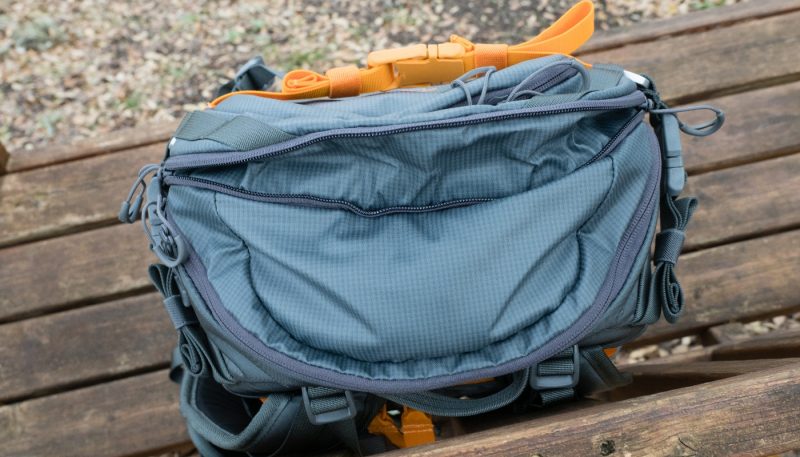 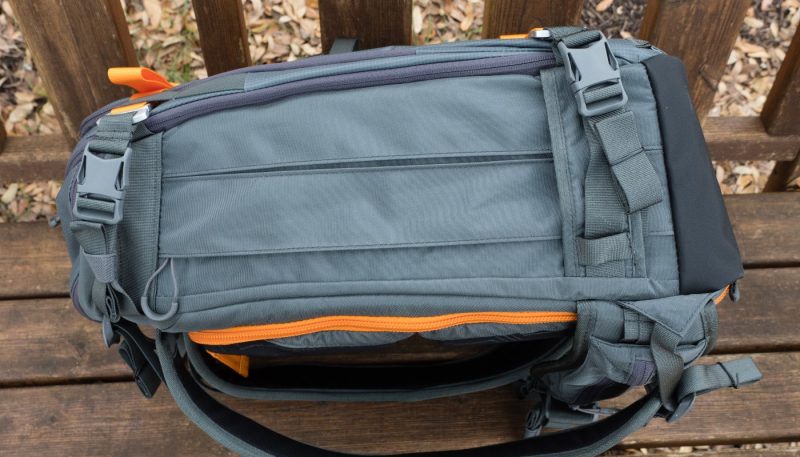 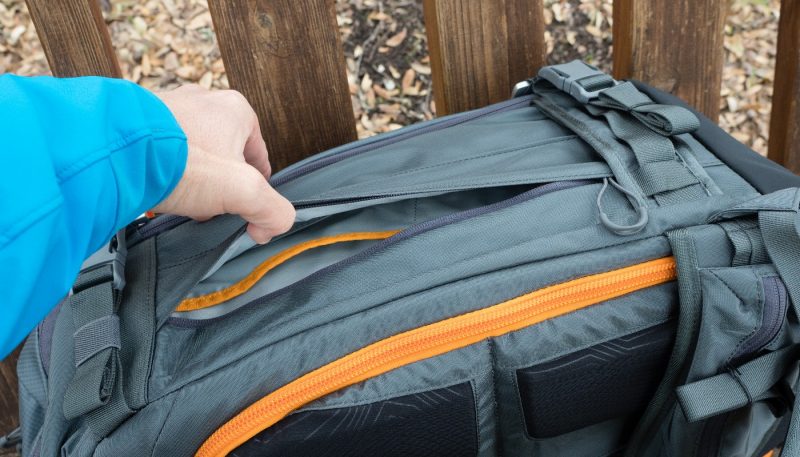 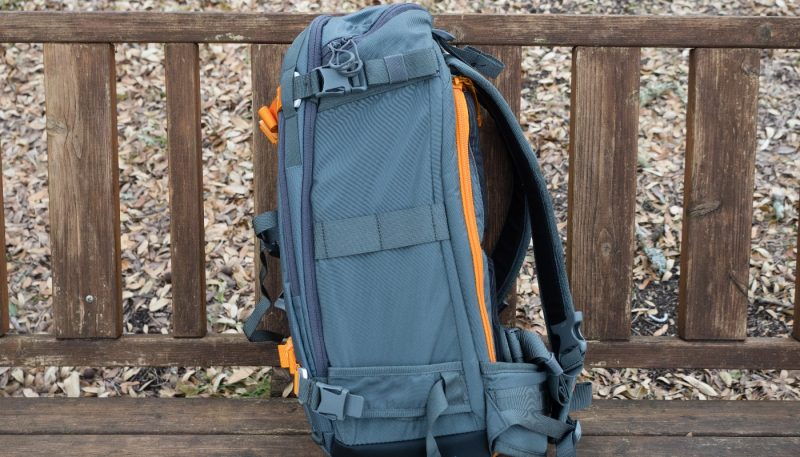 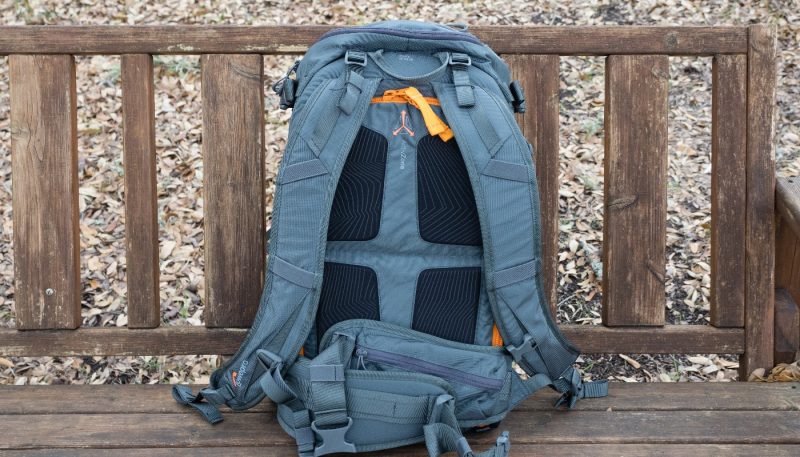 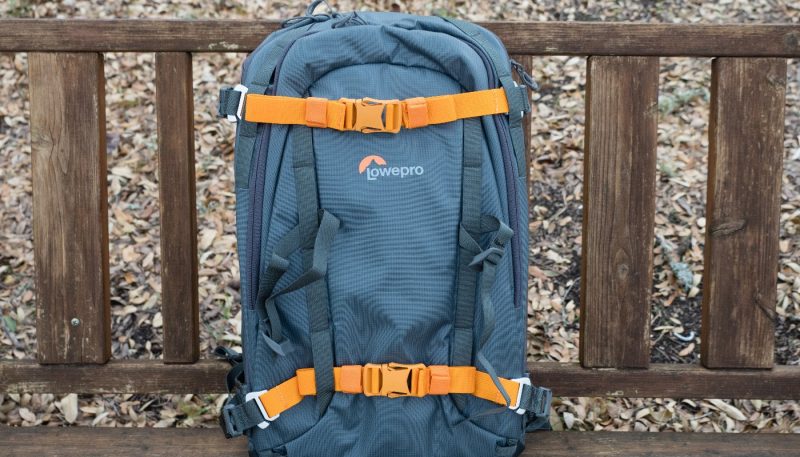 The well-padded and channeled back panel, generous shoulder straps (with load lifters) and hip belt (with load control straps) of the Lowepro Whistler BP 350 AW provide a comfortable fit at all contact areas with the body. This “ActivZone” harness system provided good comfort with summer layers but was excellent with winter layers, particularly the back panel. The pack itself is stiff and became more so when fully loaded, so mobility suffered in exchange for heavy load carrying ability and camera gear protection. The stiffness is due to the multiple layers of dense foam; both the back panel and the removable camera gear carrying insert have this foam, so the stiffness isn’t zoned to a particular area, the entire pack feels stiff as a whole.

The Lowepro Whistler BP 350 AW overall stiffness combined with the generously sized and padded components of the ActivZone harness provides excellent stability, even with loads approaching 35 pounds. The shoulder load lifter straps, sternum strap, hip belt load control straps and pack body compression straps allow adjusting weight distribution and how closely the pack follows body movement. This pack consistently felt the most stable of the testing units during active pursuits, cinching down on the hip belt and shoulder straps allowed aggressive scrambling with little worry about shifting. The compact dimension from front to back also aided in this feeling of stability while on the move and helped in negotiating tighter trails.The camera gear storage insert with “MaxFit” customizable dividers allow both maximal carrying capacity and compact arrangement of gear which minimized movement of dense camera gear and further increased the stable feeling.

The Lowepro Whistler BP 350AW’s removable padded camera storage unit provides the most camera gear storage volume of the packs tested. The rectangular shaped and densely padded area uses padded dividers that were infinitely configurable to accommodate almost any gear. A full mirrorless kit that contained three zoom lenses, one medium fixed focal, a flash, and tripod ball head left almost half the space unoccupied. The remainder of the padded space held cleaning supplies, battery charging accessories, and other electronics. This area is accessible through a full-sized; perimeter zipped back panel; the top half has a hinge so only this section could be opened by itself to avoid exposing the bottom half to the elements. This configuration prevented the back panel from becoming muddy or wet but also requires the pack to be completely removed to access any camera gear. The front of the pack has a zipped waterproof and expandable main pocket with a drain hole, perfect for keeping wet outer layers separated from all other equipment or avalanche gear.  This pocket has a hang loop and can house a 3L hydration bladder. There is also a smaller zipped top pocket, which serves well to store items that needed to be easily accessed, like sunglasses, lens cleaning supplies, snacks and extra camera and flash batteries. This pocket has an internal zipped mesh pocket and key clip. The combined volumes of both of these outer pockets limit the pack to single day use only. There are four large side compression straps that in combination with ski slots that allow carrying of large tripods or skis. Two large compression straps run across the front that are capable of securing a snowboard or snow shovel. Compression straps use Nifco buckles that are easy to operate even with winter gloves. Two full-length daisy chains on the front and two partial daisy chains on the sides allow attachment of items like trekking poles. A zipped pocket rides on the hip belt, and a flat zipped pocket occupies one side of the pack. The pack also has a fitted rain cover.

The 420d ripstop nylon, the majority of it TPU coated on the exterior and PU coated on the interior, allow the Lowepro Whistler BP 350AW to easily fend off abrasions from rock and vegetation. A Hypalon base further protects  the pack. The 1-inch compression strap webbing and full sized Nifco and ITW buckles easily withstand the high tensions necessary to secure heavy tripods during aggressive scrambles. The #10 YKK main zippers and secondary zippers functioned flawlessly, even when contaminated with dirt and sand. Overall, the pack materials, components, and construction lend confidence that all gear will remain secure and protected in the roughest conditions for years to come.

The Lowepro Whistler BP350AW is the only pack to accommodate a snowboard, skis or other large tripods on the outside of the pack with enough security during aggressive outdoor activities and the full-sized straps and buckles are operable with winter gloves. The fitted rain cover ensures absolute protection against water penetration.

Continue Reading
WHERE TO BUY
MSRP
$349.95
*Your purchase helps to support the work of Gear Institute.
HOW WE TESTED

We used the packs for both professional assignments and personal use. Most testing occurred during full days in the field while working various editorial duties in both the outdoor and motorsports industries, as well as use during photography school projects. Testing of the five packs took over a year and encompassed travel across the United States and into both Baja and mainland Mexico. The packs endured everything from winter alpine conditions to warm beaches in all four seasons. 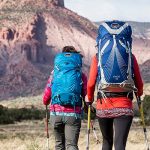 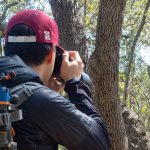 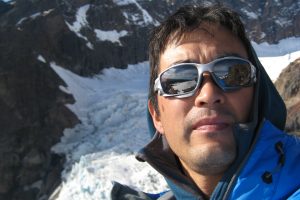