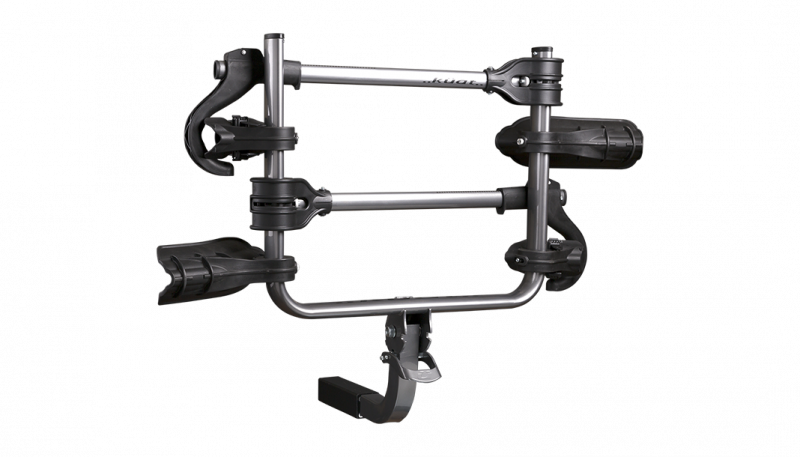 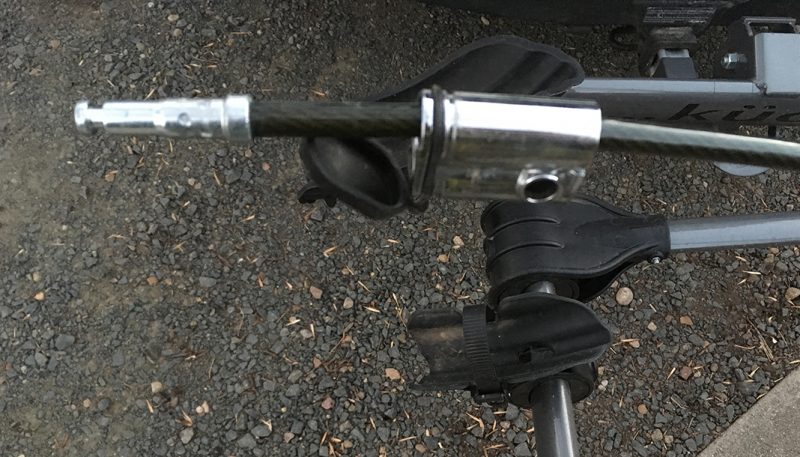 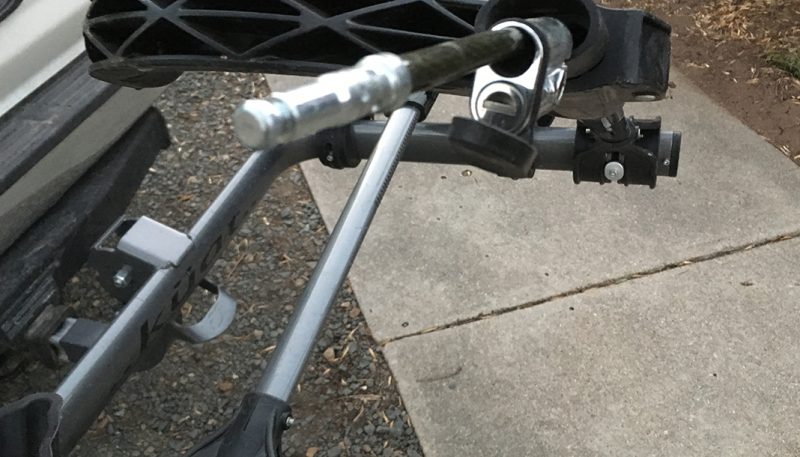 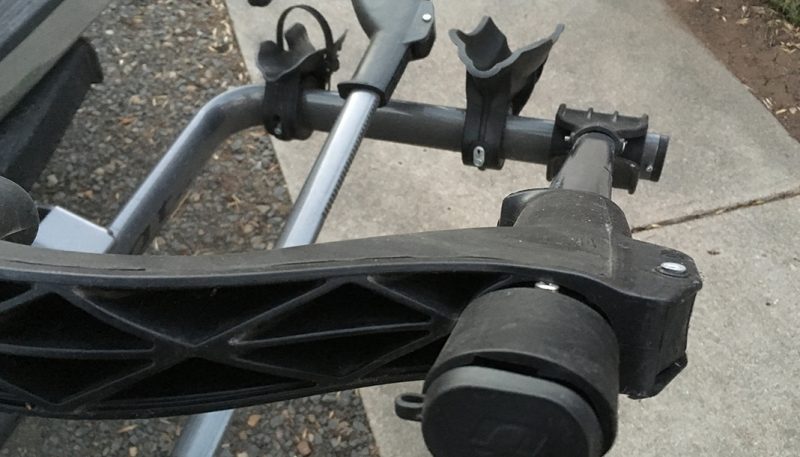 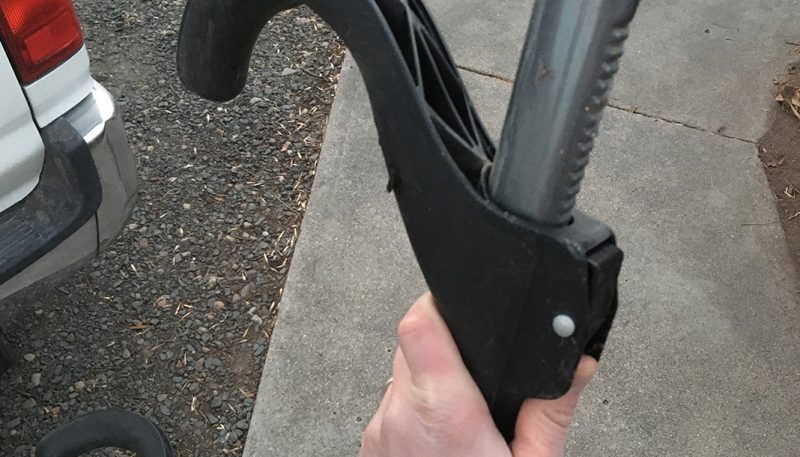 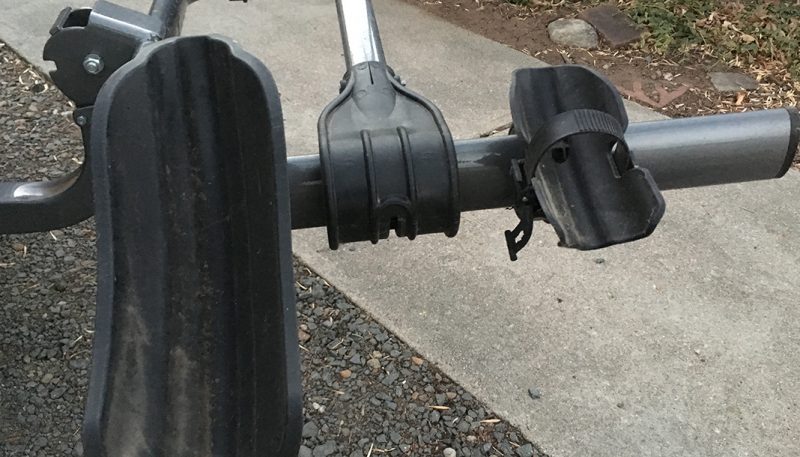 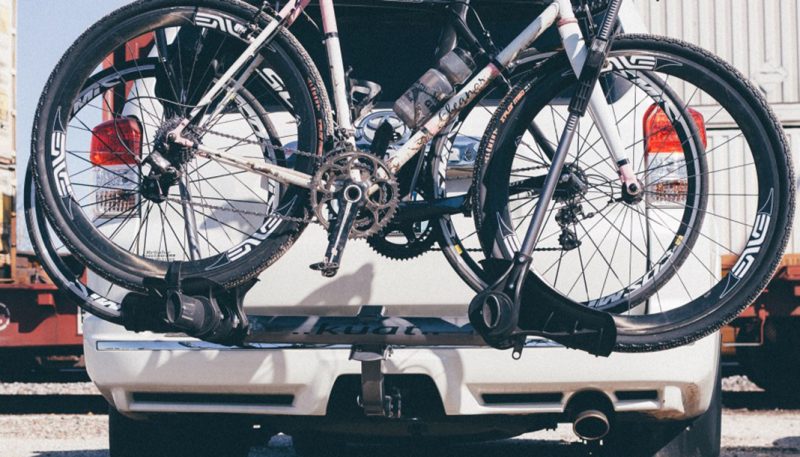 The Kuat Transfer, available in a two- or three- bike carrier, is a lightweight and simple to use bike rack. The foot pedal kick plate design to release the rack to tip back makes it one of the easiest racks to use in the test. It’s just a little tricky to reach the kick plate when the rack is empty to fold it up against the vehicle to stow. Also, there is no option of expanding or decreasing the number of bikes it can carry.

Setup
Setting up the Kuat Transfer is easy as long as you have a large elevated working space to do it. The rack can be assembled on the ground, but the constant squatting and bending over can get tedious. Since it’s easier to attach the rack to the pivot arm from the underside, Kuat does not recommend building the rack while mounted to your vehicle. Instead, they have listed that as the last step. While the included instructions are very clear and easy to follow, Kuat has also produced a very easy to follow step-by-step video showing how to assemble the rack. The video points out all the little “gotchas” that might be easy to gloss over when using written/illustrated instructions. Building the rack requires four different tools including three different sized hex wrenches and a standard 19mm combination wrench, all of which are included.

Stability
Like most other racks in this test, Kuat uses a threaded bolt to stabilize the rack to the hitch receiver. When properly tightened down this works pretty well but there will always be a little up/down wiggle as the rack pivots around the hitch pin. The Transfer works with 2” and 1.25” receivers via a 2” sleeve that wraps around the 1.25” base bar. As expected, this can introduce a little more space for there to be some wiggle if the through bolt is not sufficiently tightened down or if it loosens some. The folding joint is secure but has about a quarter-inch give—on par with a few other racks in this test.

Ease of Use
The Kuat Transfer is one of the easier racks to use with the unique kick plate lever. The easiest transition is folding the rack down from the stored, upright position. Just press the lever with your foot and pull the rack down. From there, the limitations of having the lever at the front end (closest to the vehicle) of the rack start to emerge. When the rack is down without any bikes on it and if the load arms are down, it’s very difficult to reach the lever to fold it up to store it. Or, if there is only one bike loaded, presumably on the forward rack, to tip it back, it takes lifting the rear load arm to be able to kick the lever to tip the rack and the bike back to access the rear hatch. Similarly when the rack is empty to fold the tray up, the rear load arm needs to be lifted to kick the plate then pushed back into place before the rack is totally vertical in the stowed position—an awkward move. When there are two bikes on the rack (we only tested the two bike version) and the rear load arm is being used, it’s very easy to kick the lever under the bikes to tip the rack back to access the rear hatch of the vehicle. Lifting the rack back into transport position with bikes on it just requires lifting up, no need to try and kick the latch.

The load arms themselves are also very easy to use, pretty standard for the racks in this test. The tension of the pivot of the load arms can be adjusted to preference and the ladder of the wheel hook is like the others in this test. While any of these sorts of ladder systems can get a little stuck when compressed onto the tire of the bike, the ergonomics of the thumb latch to release the hook can be a little awkward and is not as easy to release as the trigger style used by some others.

Versatility
The Kuat Transfer does not have much versatility aside from being able to fit in 2” or 1.25” hitch receivers. The Transfer is sold either as a 2-bike carrier or 3-bike carrier and can not be expanded to add more bikes beyond what it was designed for. The Transfer will hold 4.5” fat bike tires with their sold separately Phat Bike Kit.

Features
The outstanding feature of the Kuat Transfer is the spring loaded pivot pedal kick plate lever to fold the rack up and down. Other than that, there aren’t really any other included features. The fat tire kit is sold separately as is the lock set which extends as cables from the ends of the load arms. 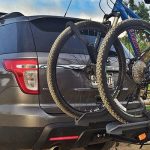 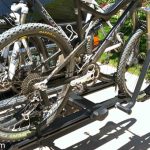