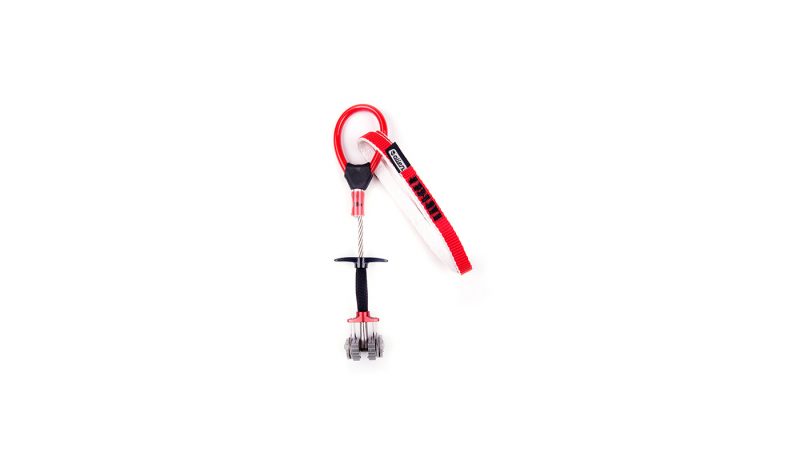 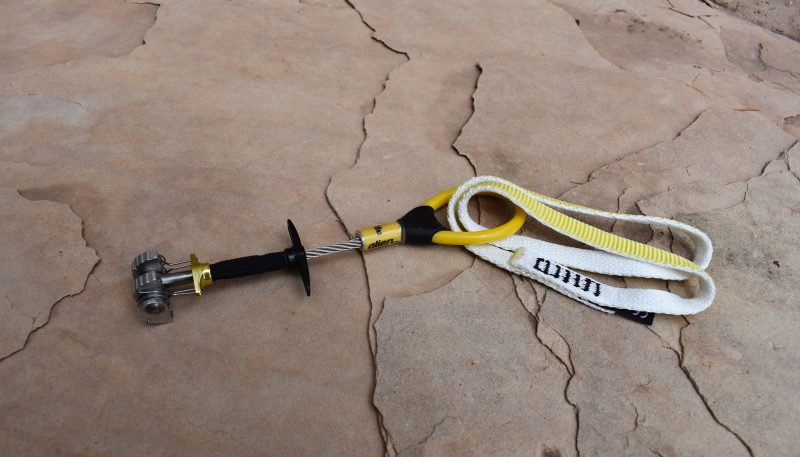 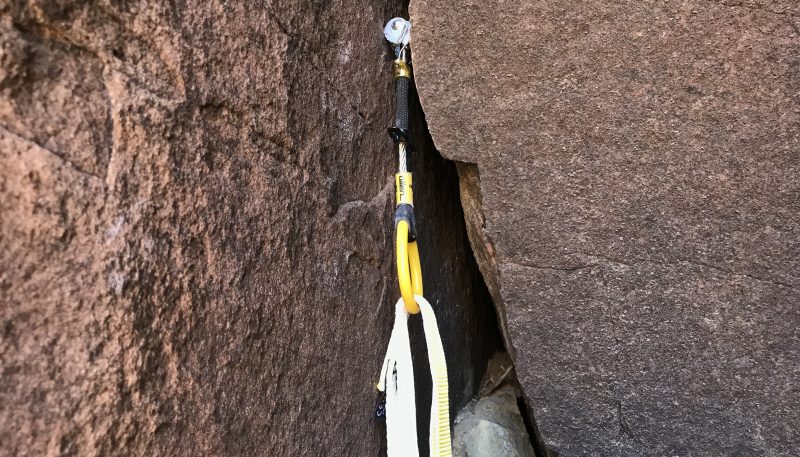 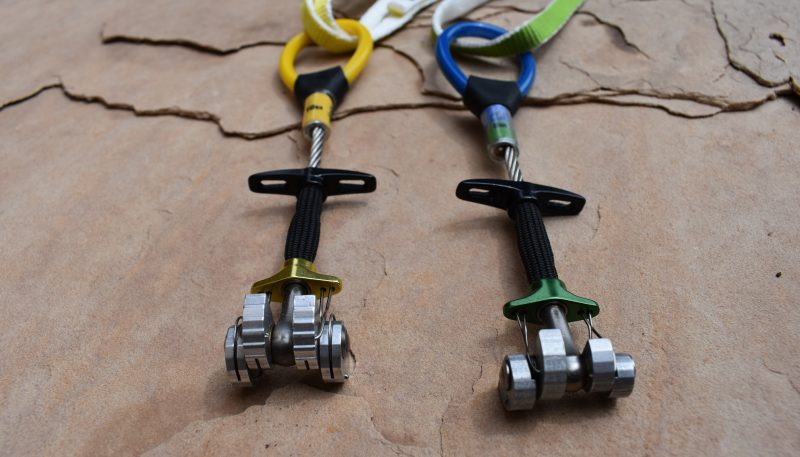 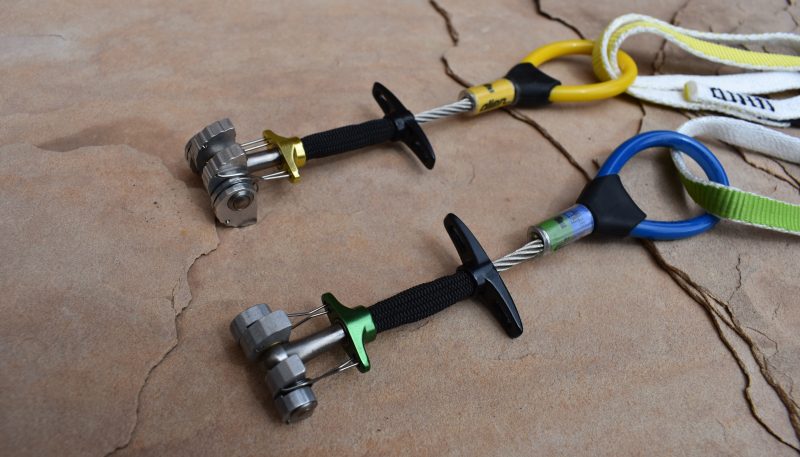 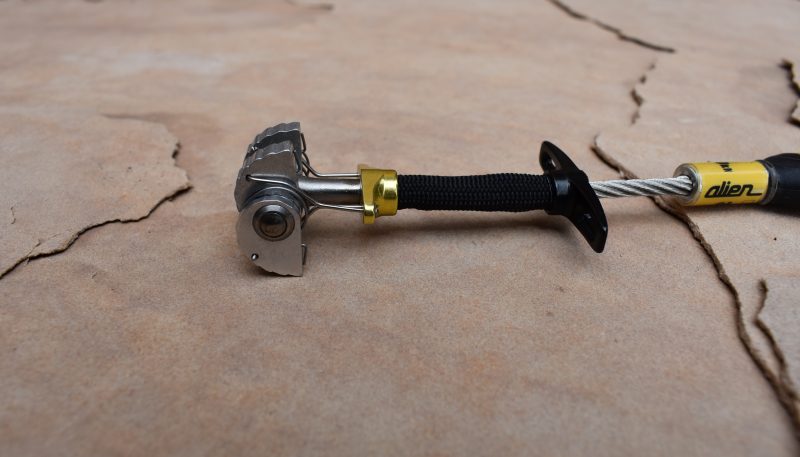 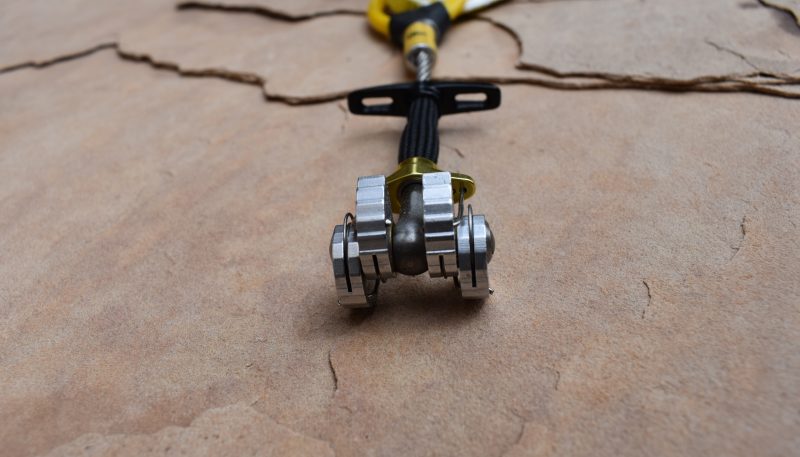 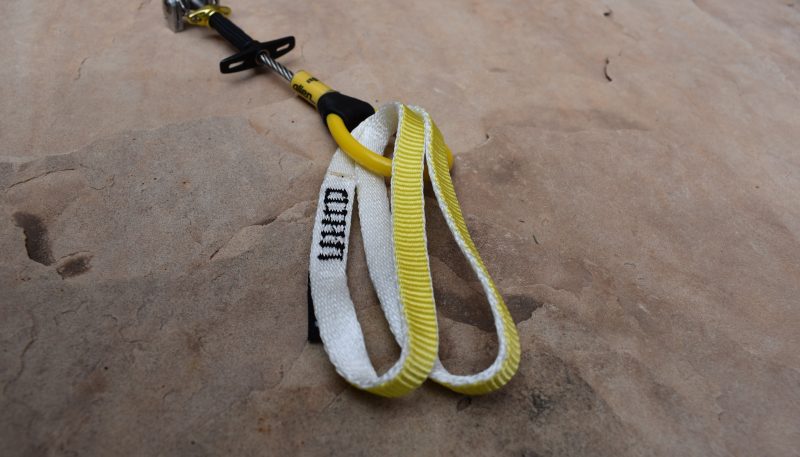 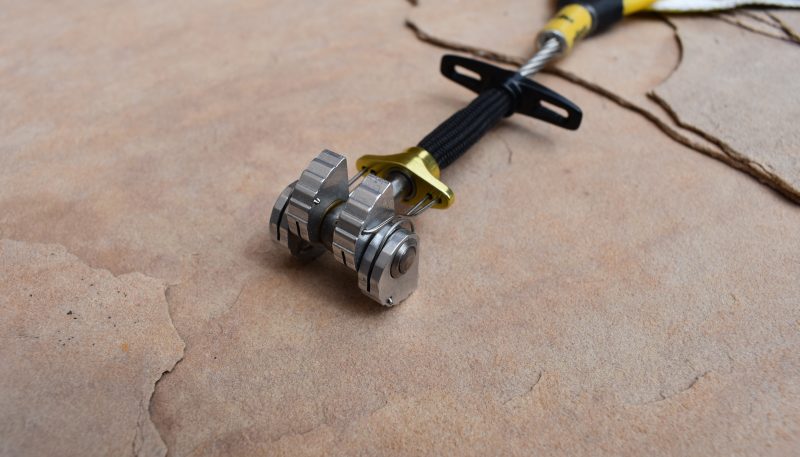 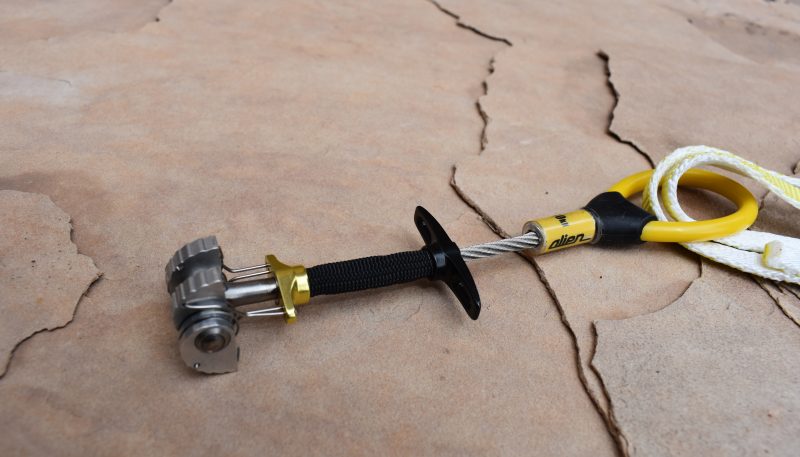 THE VERDICT
The Fixe Alien Revolution cams are a lightweight cam with a super flexible stem and narrow profile that make them ideal for small, shallow placements as well as horizontal placements. A contoured trigger bar and spacious thumb loop make them easy to place. Available with a single or extendable sling provides a lot of options for buyers along with offset or hybrid versions that excel in flared placements such as pin scars. With six sizes available they are limited in their versatility beyond small cracks.
FULL REVIEW

The Fixe Alien Revolutions are the latest iteration of the popular cam pioneered by Colorado Custom Hardware. When Fixe took over the production of Aliens big improvements were made to improve the ergonomics and the latest iteration of the Alien Revolution takes things a step further. The aluminum trigger bar is curved to help aid in its use when placing or cleaning, an improvement from the oval, aluminum trigger of the originals, also helping it stay out of the way in small, deep placements. The thumb loop has a stiff piece of contoured plastic to also help with purchase when placing. The drawback in terms of ergonomics for the Alien Revolutions is that the trigger bar is smaller than those found on other cams and while it stays out of the way in small placements, many testers complained about how small it was for anyone but those with tiny fingers.

The Alien Revolutions were the least stable cam in testing both in the field and during in-house testing. Whereas many companies are getting innovative with cam lobe designs to provide greater stability and holding power, the Alien Revolution cam lobes are largely unchanged from their predecessors. The cam lobes have some subtle features to increase stability but are relatively smooth compared to there cams tested. Despite the presence of the longest sling on any cam tested, the Alien Revolutions moved a lot—considerable displacement and walking was observed during our in-house tests. During field testing the small shallow placements that the Aliens famously excel at struggled at times due to the secondary trigger piece that the trigger wires are attached to. The trigger is connected to a nylon sleeve that covers the stem, just as the original Aliens did. And, as the originals did, the Revolutions have a secondary “trigger” piece connected to the sleeve that is then connected to the trigger wires. While Fixe has slimmed down this secondary trigger piece and made it slimmer and more narrow, it still got in the way on a lot of small, tight placements, making it difficult for testers to get a stable placement while climbing.

The flexible stems of the Alien Revolutions, one of the features retained of the Aliens of the past, are still as flexible as ever and held up well in all sorts of abuse and wear, including when loaded over an edge such as in horizontal placements. During both field and in-house testing the flexibility of the stems was unparalleled compared to the other cams. The flexible stems caused the cams to spring back to normal position after being loaded over an edge. The braided wires of the past which were prone to fraying are gone and more durable solid wire that is curved to fit around the cam lobes are now used, increasing durability based on our testing. The rubber covering the cable on the thumb loop started to see some wear after extensive use, causing some concern for long term durability compared to the thicker thumb loops found on other cams tested.

The Alien Revolutions excel at small, shallow placements and they can be an aid climbers’ best friend, just what made the original Colorado Custom Hardware Aliens famous. They have the most flexible stems out of the cams tested and hence, work great in horizontals and placements like pin scars where a stiff stem won’t allow the cam to work properly. Available with a single sling or an extendable, double sling, you can order the Alien Revolutions to your liking. They are also available in offset or hybrid form, cams with two different sized sets of lobes, making them ideal for pin scars or any kind of flaring placement, which is common in a lot of rock types such as granite. But, with only six sizes available, they are limited to small cracks. The red is the largest Alien Revolution available and is comparable in size to a .5 (purple) Camalot Ultralight or #3 Metolius Ultralight Cam, the middle of the range for many cam types. The smallest sizes are limited to aid climbing, rated at only 5 and 6 kN and the third size, the 1/2 (green) is only rated to 7 kN. The Alien Revolutions can be a great addition to a rack for small placements but they won’t do everything for you.

The Alien Revolutions have a number of features that make them appealing. The super flexible stem and narrow profile stood out with testers as great features for small, shallow placements. Testers appreciated the updated trigger wires with their unique design. Using a solid wire instead of braided wire, the trigger wires are curved to fit around the cam lobes, reducing abrasion with the rock and increasing durability. The Alien Revolutions can be ordered with single or extendable slings—the latter a popular option with many testers. The single slings were longer than any of the other slings tested on other cams, causing them to hang lower on climbers’ harnesses. For some testers this was an annoyance while others were able to see the value in a longer sling to help keep the cam in place when in a crack. Many testers also appreciate that the Alien Revolutions are available in an offset or hybrid option.

At 61 grams (2.15 oz) for the red #1 size, the Alien Revolution is the lightest cam in this round of testing, just edging the Metolius Ultralight Master Cam out by 4 grams. Fixe advertises that the new Alien Revolutions are 20% lighter than the previous models made by Colorado Custom Hardware. The lighter weight means you have less reason to think about the weight added when pondering whether to add a few pieces to your rack for a climb. You can rack a full set of six Alien cams for much less than a pound, just 324 grams (11.42 oz).

Continue Reading
WHERE TO BUY
MSRP
$75.00
BEST DEAL
$74.95
*Your purchase helps to support the work of Gear Institute.
HOW WE TESTED

These cams went through a number of in-house tests for controlled and measurable metrics and were used by a number of climbers in the field with varying experience levels and interests. Their feedback provided the information to best understand how each cam performed. We spent a lot of time climbing single pitch cracks but an equal amount of time climbing multi-pitch routes in the mountains or in the desert. We paid close attention to how cams handled when being placed or cleaned and by various climbers to gain a sense of each cam’s ergonomics and ease of handling. We looked for signs of walking and stability when placing cams in various cracks of all different sizes. 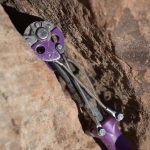