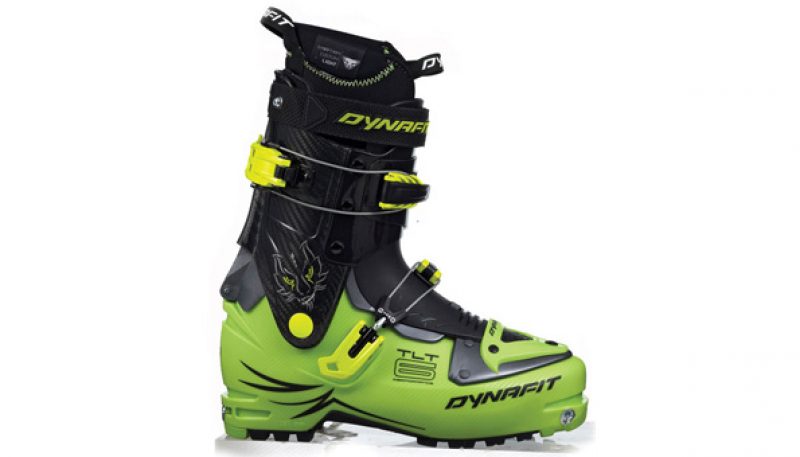 Dynafit took their “game changer” boot and made it better. It’s got a wider last to accommodate a bigger range of foot types, they’ve improved the liners, the buckles, and still managed to keep them refreshingly ugly—all while enhancing the overall efficiency and power in a deft alpine touring package.

I’ll start this review by saying I didn’t have to cook the liners. Out of the box I made quick friends with the new TLT 6 Performance. Though I used my own footbeds, I immediately noticed the wider last, something many people, myself included, wished upon the 5. Dynafit listened, and the fit of the 6 was comfy for me from the start.

My first job in the 6s was to not ski, but stand around and change out other testers’ bindings. No matter. I unhinged the upper buckle and powerstrap, and walked around the shed like I was wearing Mukluks. The walkability in the 6 was every bit as good as the 5, with plenty of fore/aft range, but just a little more refined. The presentation went beyond utilitarian, which was an austere virtue of the 5. They were “better dressed.”

The 6 includes two tongues: black and green. I opted for the black, which is the stiffer option, and stayed loyal to them for the duration of my days in the boots.

The first few runs I took were paired on Kastle 107s (188cm). I hopped back and forth between a groomer and the peripheral powder that created an interesting coastline of conditions. Taking a neutral stance on the soft snow, the skis floated easily, and I let them do the work. The 6s drove them where I wanted to go, and the flex progression was responsive, predictable and ultimately rewarding.

Closer to the groomer, the broken powder made for uneven resistance through the snow but the TLT 6s proved attentive. I was able to lean into the tongues more and maintain a consistent pace despite the conditions. The TLT held my heels very well, and snapping turns was empowering.

The groomer itself was more satisfying yet. Even on relatively wide skis, the carbon cuffed TLT 6s held my edges at speed, and the lateral integrity of the boots really became apparent as I leaned into my turns.

My main gripe is how the top buckle controls the walk mode. When it’s engaged, you’re locked into downhill mode. It has to be disengaged to free the cuff, and the buckle had to be thrown all the way forward to fit under my ski pant’s gaiter. Otherwise, it hung clumsily out the side.

And, the liners… They’re more robust than the previous ones, which were not awesome, and actually filled nicely around my metatarsal heads, anklebones, and toes, providing more overall insulation, heat retention and comfort on the longer day I spent touring.