The Beast is the answer for all of our friends out there who like to tell us that they just don’t trust tech bindings. The binding is built for the big aggressive skier, that we all think that we are in one way or another. Upping the DIN means upping the security, and the Beast does just that.

When my prototype Beast bindings showed up at my door and I picked up the package, I had one thought right away…heavy! Of course this is in relationship to all of the other tech bindings out there that sit in the 9-12 din range. But I had no plans of putting them onto a small ski either. The thought of putting these binders on a ski mountaineering ski is much like putting monster truck tires on a Porsche.

I took the Beast with me on a trip to Fairy meadows Hut near Golden, B.C.—the land of pillows, cliffs, couloirs, faces, and powder paradise. On our first full day there I found myself 30 feet above the ground (admittedly on accident) but the binding didn’t let me down on the landing. While the Beast is noticeably heavier than its counterparts in the tech world, it is also the first of its kind to offer DIN settings up to 16.

Stepping out of the hut and clicking in is a new feeling for a tech binding. There is a small lever under your toes that triggers the binding’s toe pins to clamp in on your boot inserts. It takes a little practice, but is more or less a step in binding. Unlike previous versions of Dynafit bindings, the heel piece doesn’t rotate at all for the changeover between touring and downhill. This is different from all previous models of dynafit. I found it to be a bit too fidgety to switch from tour to ski without bending over and doing it with my hand manually. This in itself is a bit annoying once you have used all of the other bindings on the market that are a breeze with your ski pole. The changeover at the bottom of the slope—from ski to tour—involves folding down the first heel riser and clicking it down so that it holds up the brake. The only problem is that it starts you out in the lifted, climbing position. In other words, there is no flat touring. That’s not a big deal if you are just doing mini-golf laps from the snowmobile, but if you have a long flat approach, perhaps the Beast isn’t what you are looking for. In my opinion, it would be nice for them to include a flat option, but at this point that would be an entirely different design all together.

I have some questions about the durability of the heel lifters in their current makeup, but I was pretty hard on the whole system for a week straight and had no real issues with anything that Dynafit doesn’t plan to fix in production. I think this is a binding that is headed in the right direction for its target audience.

I only tested the prototype, and I know of some issues that are already in the plans to be fixed for production, so I didn’t bother addressing those here. I will update when the full production binders come out. 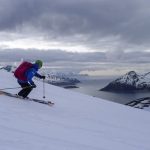