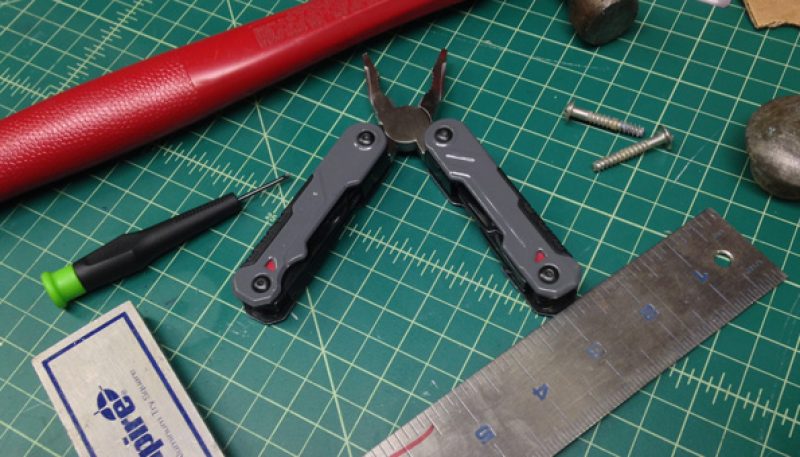 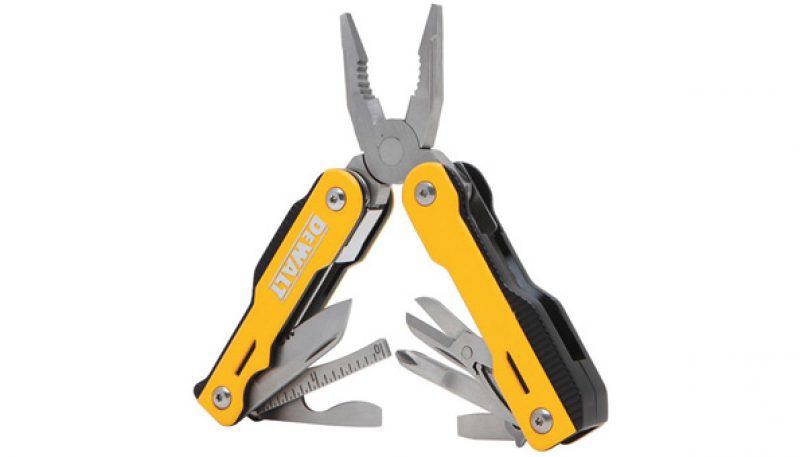 If you received this as a Christmas gift, you would be more than happy to use it. If you bought it—for $25—you’re going into it knowing it’s not going to be that be all / end all tool you’re going to rely on for everything and pass on to your kid. And look, in all reality, even if you don’t like the Stanely/DeWalt MT16, the MT8 (which is the free key ring tool) will find its way from your pocket to your hand for those quick tasks in your daily wanderings.

Value
For $25—bundled with an additional key ring tool—you’re not going to get a premium multi-tool, but what you do get is pretty impressive.  You’re getting spring-assisted pliers, bulletproof wire cutters and a pretty well-balanced smattering of additional tools in a small, lightweight package.

Construction & Materials
The Build
The tool feels very solid, but looks inexpensive—causing you to hesitate when approaching some stubborn tasks.  It will handle basic screw turning, rope cutting, and prying tasks, but is not designed to take ‘aesthetic’ abuse. For instance, I damaged the plastic liner and metal faceplate when I dropped it off of my workbench. Otherwise, it still functions as intended.

The Lock
For a knife this size (2 in.) a lock seems a little silly, but you’ll be happy the liner lock is there, though it is a bit stiff out of the box. The knife blade, however, is the only locking tool. All of the other tools snap into place, but do not lock.

The Steel
The actual steel is not known, but the black oxide coating takes care of most issues regarding corrosion. I did damage the tip of the knife during use, but it did not snap. Any non-coated steel has stood up to all of my corrosion tests.

Upkeep
After an extended period of use the arms of the pliers can loosen up, but can be easily adjusted with an Allen Key. The only part you would have an issue maintaining would be the plastic spacers/grips, which also act as the main grip on the MT16.  If you managed to break one of them, the tool would need to be replaced. While I did beat the snot out of this tool during testing, they did not break.

Durability
In one of my more extreme torsion tests, I was able to shear the bolt holding one of the arms to the pliers. Oddly enough, the plastic spacers were what kept everything together. Aesthetics would be the main concern here, the yellow finish of the handle scales seems to rub off after an extended amount of time in your pocket.

Pliers and Wire Cutter
Here’s where this little beauty shines. The pliers and wire cutter are both extremely durable. I was able to cut a nail in half with the wire cutters and you couldn’t tell I had done anything with them. I was also able to ascertain that the bolt shearing incident I had with the first tool may have been freak at best, as the second tool passed testing without issue. I was still a bit hesitant to really hulk down on the pliers during the tests.

Other Tools
The MT16 comes with really nice assortment of other tools, including a full size range of flathead screwdrivers, along with a bottle AND can opener. So, there’s no questioning that this tool is well rounded. One area of improvement would be the scissors; they couldn’t cut paper, cardboard or cloth, but they cut tin like a dream.

Design/Ease of Use
This tool boasts a set of large plastic grips that give the pliers more of a spongy feel, all while protecting your hands. It’s a strange balance that takes a little time getting used to.

Edge Retention
Not knowing the blade steel, the outcome is always a flip of a coin. In this case, the blade stood up to a massive amount of rope and cardboard cutting and didn’t flinch. It still feels razor sharp, even though the tip is a little wavy.