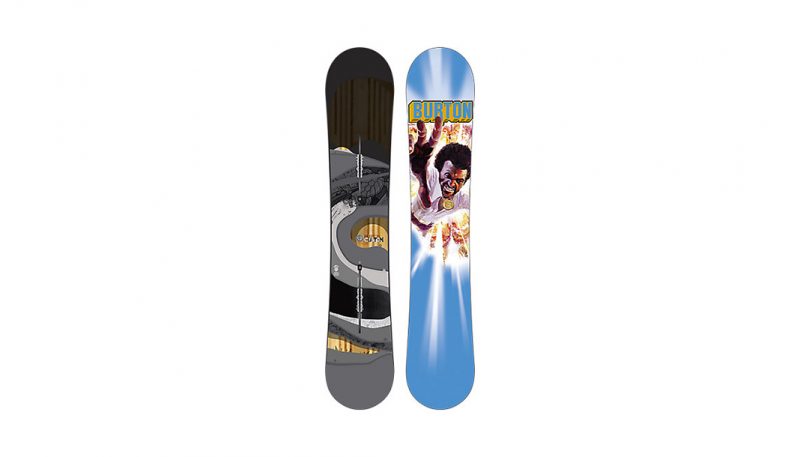 The Burton Custom is the original quiver killer. With twin flex and an evolved camber profile, it’s responsive with lots of pop. Although this review is for the traditional camber, what Burton calls PurePop, it’s also available in a hybrid camber. There’s also a very fun, twin tip for riders who spend more time in the park and prefer a graphic that tickles their prurient interest.

The choice of snowboarding legend Dave Downing, the directional deck of the The Burton Custom has been in production for two decades. Although it’s been tweaked throughout the years, the board is the Levis 501 of the snowboard world because of its tried and true design.

As one of the most responsive boards in the test, there’s still a bit of forgiveness thanks to it’s flat to early rise sections outside the bindings. It loves groomers, has good pop and does okay in powder, but not as well as boards with fatter noses.

HANDLING
Since this board is quick to exit one turn so the rider can engage in the next, the Custom 20th Anniversary devours corduroy. It’s great for riders who want sports car-like handling, but it can punish you for sloppy turns that sometimes occur later in the day.

POP + ENERGY
With medium stiffness—if you want a stiffer Custom, check out the Custom X—the Custom 20th Anniversary has plenty of pop thanks to a mostly traditional camber. The same goes for the energy of the deck: lock into a turn and it loves to push you out of the turn and towards the next. That’s largely due to a tip-to-tail layer of carbon and a core built from lightweight wood.

FLOAT
With a standard width, the Custom 20th Anniversary offers adequate float for in-bounds powder days, but any more than a foot of the fluff and you’ll be wishing for more board. The offset keeps riders back which helps in powder. If you want to get old school for a powder day, just slide back the bindings a bit, like many riders did on the original custom.

VERSATILITY
The 20th Anniversary is a strong all-mountain board. It’s great for riding just about everything but deep powder or the park. For the latter, grab the twin-tip version.

SUSTAINABILITY/CRAFTSMANSHIP
Although Burton stopped building stateside years ago, the board-building behemoth has plans on passing the buck to contractors this year. According to Burton, this coming year, “we aim to audit 100% of our contract manufacturers, with a focus on continuous improvement and capacity building. We also aim to get 100% of our nominated raw material suppliers to adhere to our standards.”