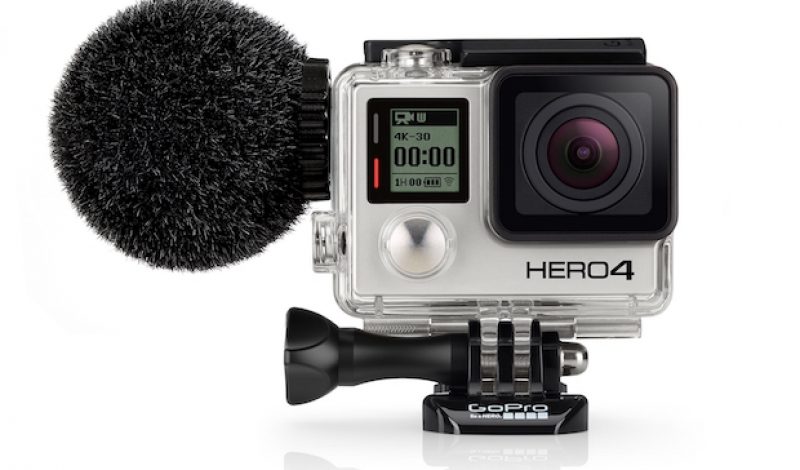 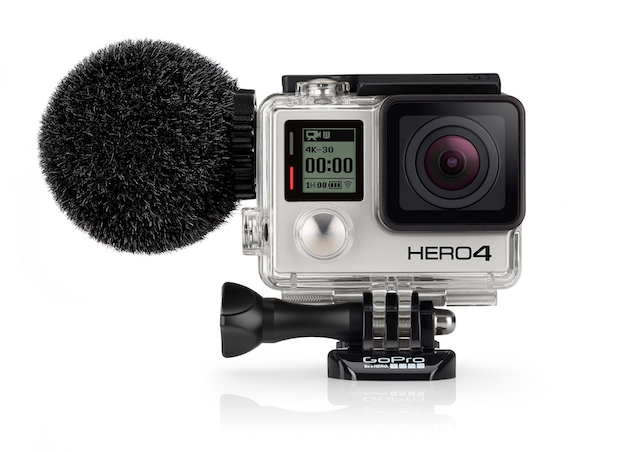 Over the past decade and a half, GoPro has proven to be the cream of the crop in the action camera market. So much so in fact that the term “action camera” has all but been replaced with “GoPro.” The company’s HERO series, currently on its fifth variation, has consistently been a market leader in video quality, features, and adaptability. When stacked with the myriad accessories and editing software available to improve your experience, GoPro has undeniably changed the way we capture our triumphs and failures on video when we’re out on an adventure. Though the current focus is on the HERO5 and Session models, there’s no denying that the HERO4 was the company’s most popular device. At launch, it was the most advanced action camera on the market and it quickly became the highest selling series of the bunch.

But as awesome as the HERO4 is, capturing high-quality sound in all conditions has never been its strong suit. This is, after all, an action camera designed to record your active life in the moment. That said, however, the HERO line of GoPro cameras has been repurposed as the new “camcorder” that can take a beating in the outdoor world. As a result, you now have guys like me creating video reviews with their HERO cameras. I’ve even seen folks record concerts with them – so whether GoPro set out to make the next best thing in recording “home videos’ or not, that’s what the HERO and Session series’ have become. 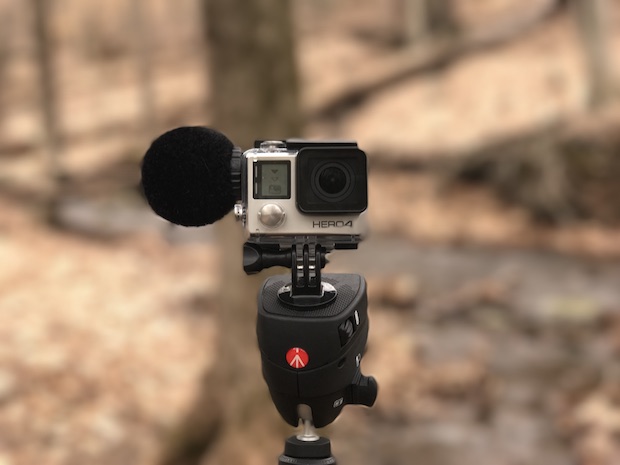 But anyone who owns a GoPro HERO4 camera can talk to you at length about the challenges they face when capturing the perfect balance between video and audio. When using the standard housing and back plate that comes with the HERO4 you can expect muffled and distorted audio, especially when recording on the move. In an environment full of different sounds you’ll also get a lot of bleeding, which can drown out what you’re trying to capture. Additionally, you also need to be relatively close to the camera unit during recording, which can make product audio hard to capture without spending additional time tweaking the levels during editing.

Point blank: when recording with the GoPro HERO4, you can either have great audio or guaranteed protection from the elements; not both. With the standard housing and back plate in place, you reduce the effectiveness of the microphone, which is located in the bottom of the camera unit. With the housing off, you can achieve clear audio with minimum compression and distortion, but run the risk of getting the camera wet and permanently damaging it. It’s all a bit of a head scratcher. 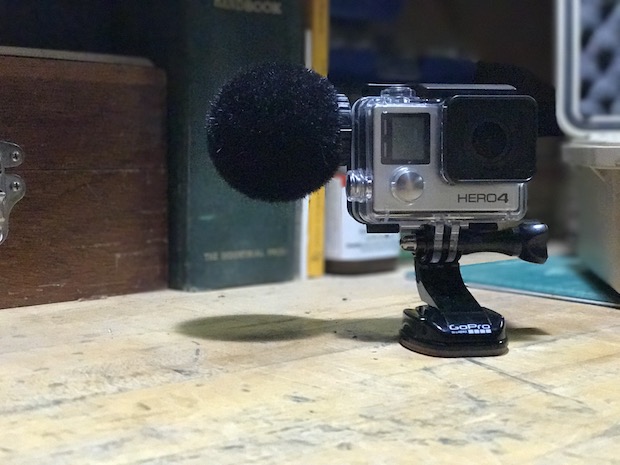 The video pros will tell you that you should never use an on-board microphone using any recording device, let alone one from GoPro. They would tell you “if you’re serious about recording high quality videos, you should use an external microphone, or record the audio separately.” Well, there’s a trick to that as well – if you use an external mic with the HERO4, you also need to use a housing with a cut out on the side which exposes the camera to the elements.

Some folks have tried solving this situation by modifying their housings with gaskets and silicone, but in many cases a second issue arises with external mics. Noise interference in the form of beeps, pops, or squelching can occur depending on the type of adapter the microphone uses. That said, HERO4 users who want to make videos that aren’t over-dubbed with music in the editing process, generally record audio with a secondary device, usually on their phone with an external microphone attached or a handheld recorder. 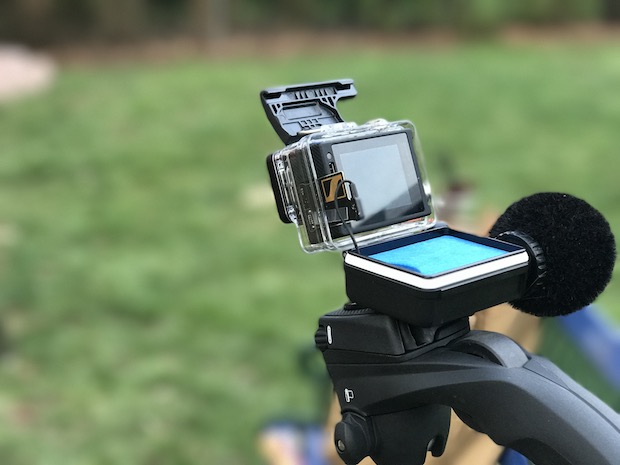 The whole situation has spawned a multitude of dedicated blogs and online forums full of GoPro users sharing their frustration and DIY remedies. Thankfully GoPro took notice and came out with their HERO5 which is waterproof and rugged, right out of the box without the need for extra housings, dongles, and doodads. But where does that leave the over-abundance of HERO4 owners, which to date, are the largest group of GoPro owners? Well, to be honest, as of today they’re in a much better place. Yes, it’s going to cost you some clams to benefit from GoPro’s “latest release,” but in the end, you’ll be left with a HERO4 that can record near perfect audio in a variety of conditions without the need of ancillary accessories.

Enter the Sennheiser MKE2 elements ActionMic, which is the result of a “skunkworks” style collaboration between Sennheiser and GoPro. Far from a standard, plug-in, external microphone, the ActionMic is a complex piece of audio equipment which actually improves on the frequency range and response of the GoPro HERO4’s on-board microphone, giving the user crystal clear audio never before heard on an action camera. 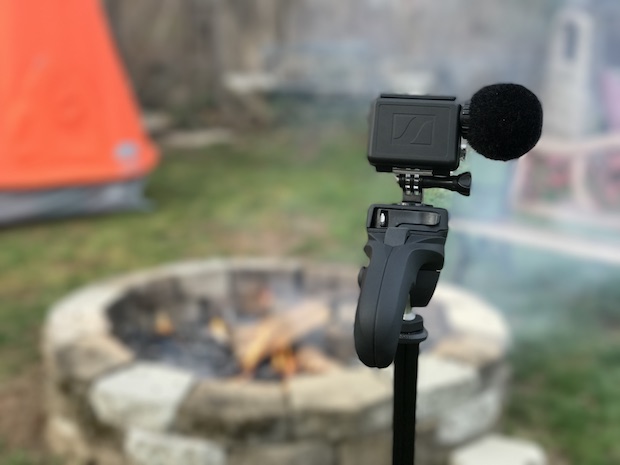 Like many of the other external microphone options on the market today, the Sennheiser ActionMic interfaces into the HERO4’s mini-USB port. Unlike those other microphones, however, the ActionMic features a built-in chip which “talks” to the camera and eliminates any sound interference, including beeps, pops, and squelching, while maintaining a heightened frequency range and response. The whole package is baked into a back plate that Is impervious to weather and works with the stock HERO4 housing. It even comes with a removable wind diffuser to help improve audio recording in breezy conditions.

If all of that didn’t catch your attention, then consider this. The Sennheiser MKE2 elements ActionMic is the only external microphone that is officially approved for use with the HERO4 by GoPro itself. The was created under the “Works with GoPro” program, which means it was built to the company’s exacting standards. 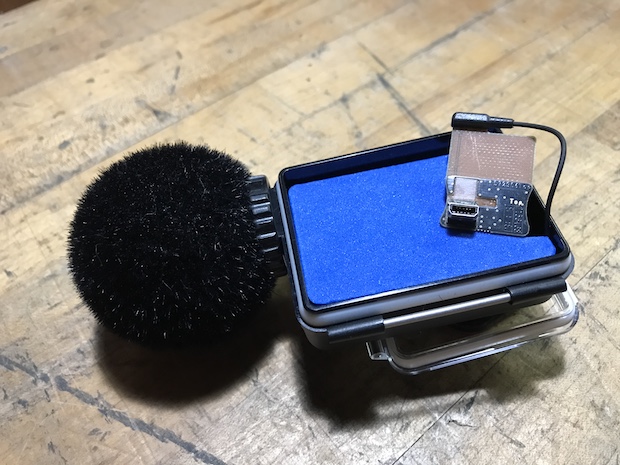 We’ve been talking with both GoPro and Sennheiser about the ActionMic since this project began last April. Since then, they’ve been kind enough to share details with us about the device, its progress, and finally the very first sample of the mic that was built for public consumption in the U.S. I’ve been working with the unit for the past three weeks, recording as much as I can in a variety of environments and situations to vet out its pros and cons. Considering that this accessory will set you back $200, we wanted to make sure it was worth your money.

In the video above, you can hear how much of a difference there is between the audio captured using the standard mic and the sounds picked up using the MKE 2 elements back plate and microphone. While the audio from the standard housing isn’t horrible, it does sound compressed. That same audio is all but ruined when the wind starts to blow, requiring a lot of work in the editing room to sort things out. But with the ActionMic installed wind noise is eliminated due to the diffuser, and the muffled compression sound is replaced with crisp and detailed audio that rivals professional mixing.

I picked up a GoPro HERO4 Silver almost a year ago, but have rarely used it due to not wanting to have to sit in front of my computer and sync up audio or create my own DIY solution for recording sound. I understand that there needs to be some time spent in front of the computer to make a compelling video, but I don’t want to have to sync things up, set levels, over-dub, and so on. That’s why the ActionMic is appealing to me. Not only does it solve all of the current sound issues with the HERO4, it also creates a tool that can be used as easily as pulling out your iPhone, but with much better quality. In short, whether you’re using it like me or to record yourself being Heli-dropped onto Whistler for a day of powder carving, you’re going to benefit from this solution. 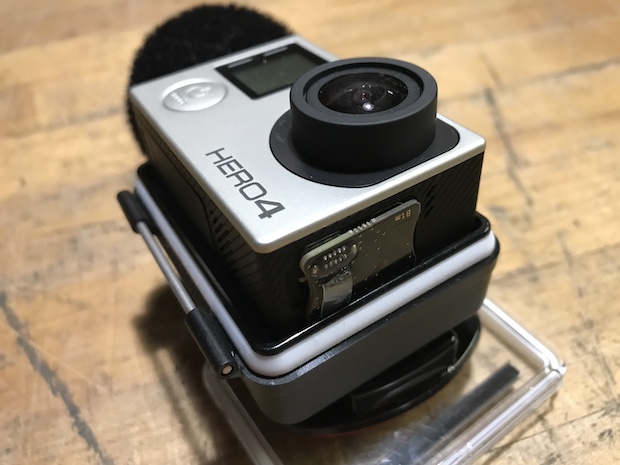 Everyone is making videos nowadays, and in order for someone to spend their time watching yours, it needs to have both high quality video and audio. If you’re a GoPro HERO4 owner and are serious about using it to record your life and adventures, the Sennheiser MKE 2 elements ActionMic is a necessary expenditure. Not only does it greatly improve the stock audio, it also streamlines your overall recording experience, giving you top notch footage that you’ll be proud to share with friends, family, or perhaps even the numerous followers of a major online gear review site.

While testing the HERO4 and ActionMic,I wore the unit on a Peak Design Capture Kit which mounted to the shoulder strap of my pack. The additional five ounces that the ActionMic added weren’t an issue in regards to keeping the camera in place on the mount, or even noticeable in carrying it. Additionally, when filming on location, and using a Manfrotto Compact Action Tripod, there weren’t any fit or function issues to report either. In all instances I used the wind diffuser, which cuts out any and all distortion while on the go. 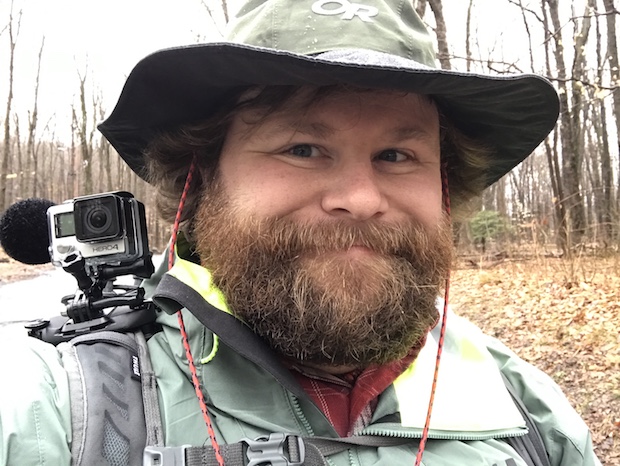 1. Make sure the clear tab on the interface of the mini-USB chip is inside of the housing when you close it, or you will compromise the waterproof seal. This could allow water and debris to seep, potentially damaging the camera.

2. The ActionMic does cause a slight drain on the battery, which can add up to 15 minutes on average for video shot at 1080p/60fps. I generally recommend having two batteries with you regardless, but the unit is also compatible with the HERO4 Battery BacPac.