Beer for Breakfast: A Good Idea Whose Time Has Come 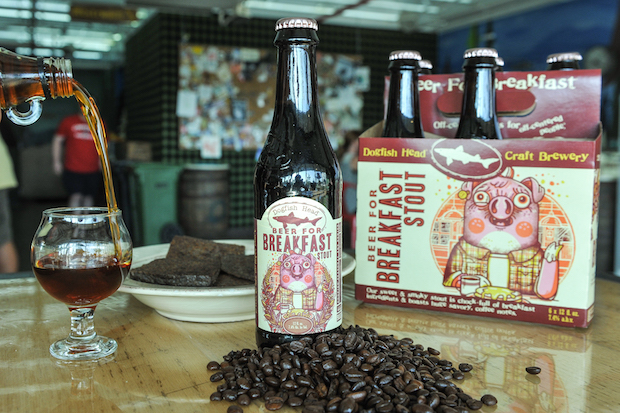 In the freelance world, sometimes one thing leads to another and you end up shooting the breeze with someone about an article you just published. And every once in awhile that conversation can lead to to them letting you in on something wild and amazing coming from their company or group. In this case, the article we put up last week about the Woolrich/Dogfish Head Brewing collaboration led to Dogfish Head reaching out to me and telling me about their new “Beer for Breakfast Stout” which begins shipping out on November 7th. Now, as much as I would love to write an article just about craft beer, I’m fairly certain my editors wouldn’t let that fly. But in the case of “Beer for Breakfast” we’re not talking about just any old craft beer here – we’re talking about a craft beer that contains some classic breakfast ingredients. In my mind, that puts it in the running for the ultimate morning trail or camp beer.

Along with Guatemalan Antigua cold pressed coffee, maple syrup from Western Mass, and a bevy of other interesting ingredients, Beer for Breakfast contains an old hearty winter-camp staple: scrapple. For those of you not familiar with this breakfast classic, scrapple can be likened to Spam and is made from pork scraps, cornmeal, and different spices. For this undertaking, Dogfish Head sourced their scrapple from Rapa, the largest producer of scrapple in the country so that it can be folded into the mash with the barley, oats and specialty grains at the beginning of the brewing process.

For a company who has been designing and brewing “off-centered beers for off-centered people” for two-decades, Beer for Breakfast seems like a natural direction for Dogfish Head to. I’ve yet to try the beer, but Dogfish Head Brewing founder, Sam Calagione, sets up the drinking experience beautifully:

“Remember the first time you made out with someone…new, exciting, perhaps the experience induced a certain sort of bodily tingle? I’m not a doctor but I believe that’s essentially identical to the experience of trying Beer for Breakfast from Dogfish Head. The roasted coffee and maple notes pull you in for the big payoff. The scrapple is subtly flirty and adds complexity in the background.”

He then goes on to add:

“In descending order of intensity for flavor and aroma contribution it goes: cold pressed coffee, applewood smoked barley, maple syrup, then scrapple. You want the savory, smoky notes to contribute in the background of the beer, not the foreground.”

As someone who has crawled out of tent on many cold and dewy fall or winter mornings over the years, I won’t lie to you: I’ve often grabbed a good dark beer to shake the dreams from my head and get me in gear for a few hard miles on the trail. At those times, I’m not looking to get fully tuned-up, just a little tuned-in and I think Beer for Breakfast – coming in at 7.4% alcohol content – is the perfect companion to sip on while you’re packing up and heading out for the day. As stouts go, it will most likely fill you up with the fuel you need to bag a couple of peaks, and will probably pair well with handfuls of G.O.R.P or granola. I’ve been promised a couple of samples, so time will tell. In the meantime, I need to go see what I can do about this hankering for scrapple and maple syrup that’s brewed up inside me while writing this piece for you folks.