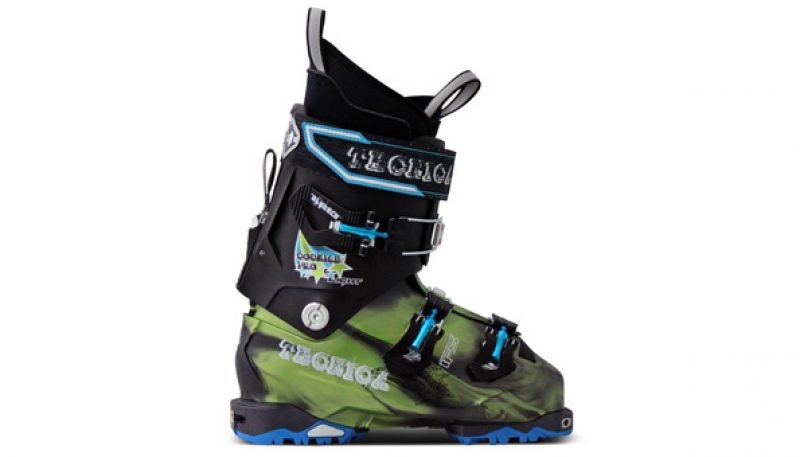 The Cochise Pro Light is an excellent hybrid of Freeride and touring DNA. The overlap cuff design provides a consistent, predictable flex, and the interchangeable tech soles and AFD give it versatility and sole longevity. It's not as stiff as it looks, but it's not as heavy either. Get the Tecnica Cochise Pro (more like the Lange XT 130, but with tech fittings) if you want to charge around the resorts. Save the Light for sweat-labor adventure deep in the hills.

At our boot test, I had a hard time deciding which Cochise I wanted to try first: Pro or Pro Light. The Light was a stripped down version of the Pro, with simpler buckles, liner and flex index (120, as opposed to 130).

Tech fittings – bonus
Right off I noticed the tech fittings, which I think is a great move for companies to provide removable soles, not only to increase the longevity of the boot, but to allow individual skiers to dial in their own perfect ski-and-binding system.

Walking
The Lights didn’t have a rockered sole, so even though the walk mode had a significant range of motion, the boots walked with a slight clunk—though it was by no means a deal breaker. Switching the walk mode was easy, even with a gloved hand, and there was plenty of smooth motion when skinning on tech bindings. And at a svelte seven pounds, this boot was easy to lug around.

Downhill
When I started down the hill the forward lean was a little upright for my taste, and when I strived to rail turns on the groomers, I had a hard time centering into the front seat.

I compared this to skiing more technical terrain on the mountain, where the Lights seemed a little soft in more complex terrain, and the flex collapsed forward in dynamic situations.

Soft as it was, the overlap flex was consistent and predictable front to back (meaning, I knew when they were going to collapse), with no problems in lateral responsiveness. Tip: I scrapped the Palau liners (sorry guys) and put in a pair of Intuition wrap liners after a couple runs, and the boots’ overall stiffness rose considerably, thus eliminating the frontal collapse.

Big picture
I wanted this boot to be the one and done—the frontside hero, backside champ. But that boot doesn’t exist. And probably never will. Other testers agreed with me, believing the Light was better off slinking off for glory in the backcountry than trying to hone its chops at the resort.