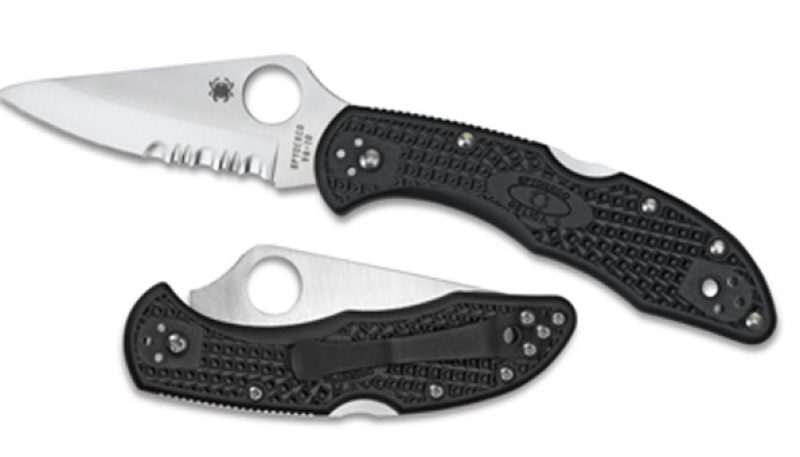 I have used different versions of the Spyderco Delica over the years and they never fail. The Spyderco Delica 4 exemplifies what an outdoor, backpacking pocketknife should be. It is user friendly and will become the knife you depend upon for years to come. My bit of advice: Do not be fooled by its weight. This knife is very light, but unbelievably durable. In the era of “fast packing” and “light weight packing” there is no better pocketknife.

Construction & Materials
The Build
For its weight, some people may think this knife is flimsy and cheap. But that couldn’t be farther from the truth. The Delica 4 has a skeletonized stainless steel frame sandwiched between the handle scales and blade. That frame keeps the Delica rigid. The textured, fiberglass reinforced nylon scales are highly durable and increase the level of grip in your hand. But they will also abuse the pocket you decide to clip it to. This, in my mind, is a fair trade.

The Lock
Lock-back style locks are tried and true and rarely fail. Their one downfall could be an actuator that rises above the height of the knife spine, which can be accidentally pressed during use. This is not an issue with the Delica 4. Spyderco has done a great job of trimming that actuator down, making it level with the frame and then going as far as to notch it out in the middle for added security.

The Steel
VG-10 Stainless steel is a Japanese cutlery steel with a Rockwell rating of 58-60. It will keep a good edge and is highly resistant to rusting. Spyderco chose to keep the blade thin, but give it a Sabre, or “V-Grind” (based on its shape). This type of grind is very strong and resilient to abuse, which will help preserve the serrations on the back of the blade.

Upkeep
The Delica 4 can be easily broken-down in the field or at home to be cleaned or fixed. The texturing of the handles increases the grip, but can get clogged up with dirt and debris.

Durablity
For its weight, this knife is incredibly durable. In talking with some users of the Delica, they thought the knife felt cheap because of its weight. But it really isn’t. This is a good knife that can take a beating.

Design & Ease of Use
If I could have given this an 11 rating I would have. Spyderco basically invented the ambidextrous thumbhole, which allows you to flip the blade open with either hand. On this knife, the large thumbhole seems even bigger than it is! The ability to place the pocket clip in 4 different positions makes this knife even more universal.

Additionally, the Delica 4 has jimping–or grooves–cut into the back ridge of the blade. This increases the ability to really push down on this puppy and put it to work. It’s a small feature that some people may not even notice until they’re utilizing it.

Edge Retention
Brand new, the Delica 4–being that it’s Sabre ground cutlery steel–was scary sharp, but over time that sharpness gave way to a standard level of sharpness we’re all used to. Without a diamond stone sharpener, it may be difficult to get back to that superior level of sharpness but the level you will get to is more than adequate for a pocketknife.