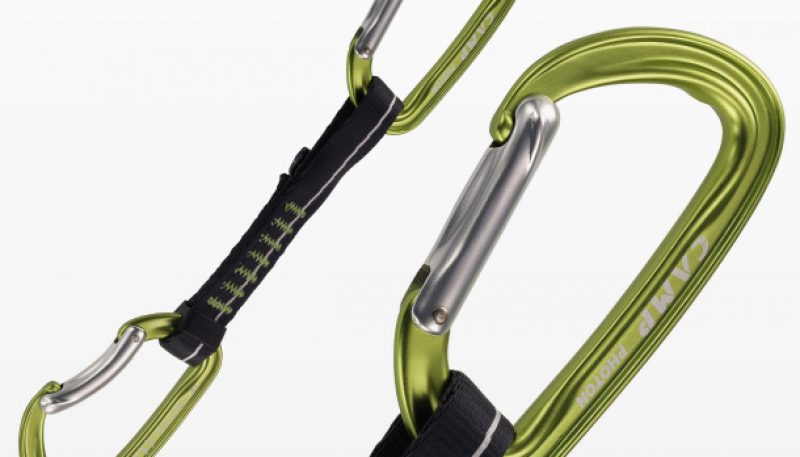 The C.A.M.P. Photon Mixed Express is a high performance quickdraw that has two light, full size carabiners paired up to create a great draw for onsighting sport routes or lightening a trad rack. The Photon carabiners are incredibly light but are full size to make for easier handling and a large a gate opening.

The Photon Straight Gate, used on the top of the quickdraw, is advertised as the lightest keylock carabiner in the world. Featuring a slim, tapered keylock nose, the carabiner is effective at preventing snags when cleaning a steep sport route or unclipping from a harness or sling.

Testers found the Photon to be one of the easiest quickdraws to clean from hangers and ropes. The gate has a few small and relatively subtle raised features to help provide additional purchase when clipping. The full size carabiners are easy to hold and use while also being incredibly light for a full size carabiner at just 1.3 ounces, similar to many of the lightest carabiners on the market.

The Photon Bent Wire Gate, used on the bottom of the quickdraw, is advertised as the lightest full size carabiner in the world. The bent wire makes for easy and quick clipping and has a slender and tapered nose to prevent snags when cleaning a route. The carabiners also have the largest gate openings out of all of the quickdraws tested. The Bent Wire Gate carabiners are similar in size to many full size carabiners such as the Black Diamond LiveWire or Cypher Cicada but are similar in weight to many lightweight carabiners such as the Trango Super Fly or Metolius Bravo.

Dogbone Runners
The 16mm nylon dogbone runners are available in three sizes, 11 cm, 15 cm and 20 cm. The runners are in between a skinny, lightweight runner found on many lightweight draws but are not as thick as those found on many beefy sport draws. Hence, some people will find the draw thick enough to grab when working sport routes or to make an emergency clip while others will desire a wider draw to grab ahold of. The runners are stitched tightly on the rope end to help keep the carabiner in place.

Negative
The biggest negative about these quickdraws is that the rope end carabiners easily shift out of place and become oriented so that the carabiner rests on the runner next to the gate instead of along the spine of the carabiner. This annoying tendency occurred while climbing single pitch sport routes or on long traditional routes. The orientation of the carabiner doesn’t get to the point of cross loading the carabiner across the gate but caused me to continually adjust it before or after clipping the rope to it, perhaps just because it “looked wrong” more than anything. I believe it’s the design of the carabiner that caused this rather than the runner, as the carabiners behaved in the same fashion on a number of other dogbone runners. The shifting of the rope end carabiners may make some people wish that the runners had something more to keep them in place, such as the rubber retainers used on other draws.

Other Versions
C.A.M.P. also offers the Photon quickdraw with a bent gate carabiner in place of a wire gate. The Photon Express draws are still incredibly light at 2.9 – 3.1 ounces and handle well because of the full size carabiners and groove features on the bent gate. Available with 3 lengths of nylon runner, they cost  $22.95 – $24.95. Other C.A.M.P. versions of the Photon series are availabe with Dyneema dogbone runners and with Photon Wire carabiners on both ends of the draws, creating a super light quickdraw. 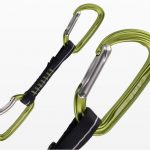