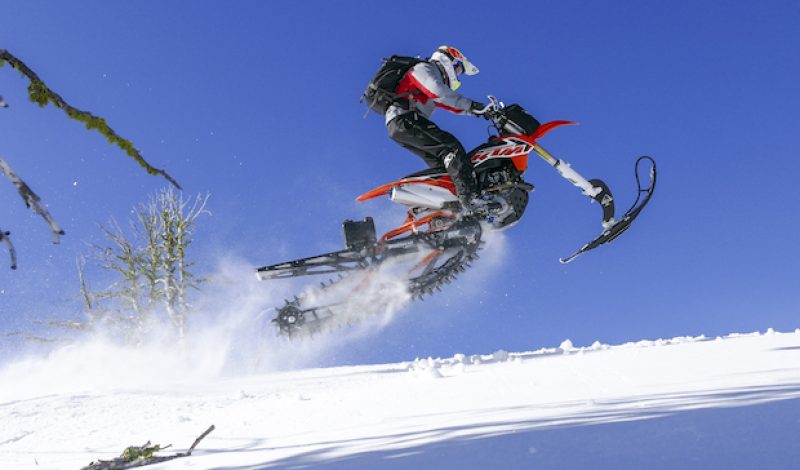 Looking for a new outdoor activity to help pass the long, cold months of winter? Need a shot of adrenaline while you’re at it? Then check out the Timbersled, a conversion kit that transforms your dirt bike into a snowmobile for awesome winter riding.

The Timbersled is the brainchild of company founder Allen Mangum, who first rode a “snow bike” back in 2008. At the time, he saw a lot of potential in this new type of hybrid off-road vehicle, but he also saw lots of room for improvement too.

Tapping into his years of experience designing snowmobiles, he went to work building and testing prototypes of what would eventually become his signature product. It took him two years to find just the right design, and in 2010 Mangum brought his first production model to market. Since then, the snow bike industry has continued to grow into a modest sized business for Timbersled, who have been at the forefront of innovation. So much so in fact that Polaris bought the entire company last year, and intends to bring it product to the awareness of even more people. 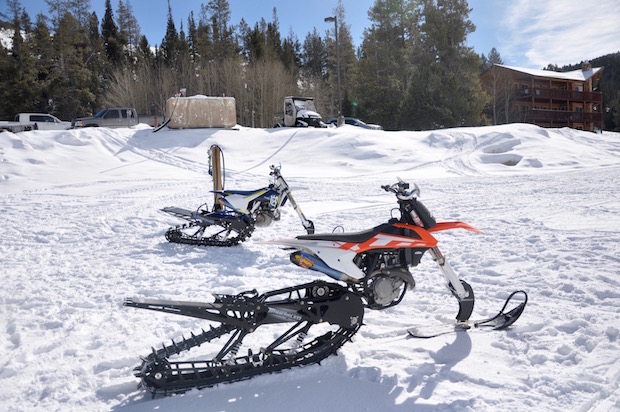 Available in two models, a “short” version that is a bit more maneuverable and easy to handle, and a “long” version that is better suited for deeper snow, the Timbersled resembles something you’d see in a sci-fi movie set on a frozen planet. The kit replaces the front tire of a dirt bike with a single wide ski, while the back end integrates a custom built tread that resembles something you’d find on a snowmobile instead.

Once the conversion is complete, the rider gets an experience that is closer to riding a dirt bike on snow rather than a snowmobile. It takes a few minutes to get the hang of the steering and the feel of the Timbersled, but once you do start to pick it all up, you’re off and running in no time at all.

Fast and fun, the Timbersled is more agile than you would think based on your first impressions. The front ski provides more stability than you might expect, and once you learn to trust the vehicle, you’ll probably find yourself making tighter turns, and maneuvering down narrower trails too. That isn’t to say that riding one isn’t a bit awkward at first, but it doesn’t take long to pick up on its nuances and from there it is an easy adjustment to make. Particularly if you’ve ridden dirt bikes before.

The Timbersled doesn’t come cheap. The conversion kits start at $4000 and work their way up from there depending on the style and features you’re after. That price doesn’t include the cost of a dirt bike either, which you’ll have to furnish yourself.

That said, riding a Timbersled is great fun. If you already enjoy snowmobiling, chances are you’ll really love what this machine brings to the table. It can go places you didn’t think were possible before, and open up winter trails for some very interesting possibilities.

Find out more at Timbersled.com and check out the video below to see one in action.