The Virgin, the Master, the Tower, and Me

I got the call somewhere in Wyoming while heading home to Colorado from California. It was Steve “Crusher” Bartlett, a British ex-pat and longtime Utah desert climber. His partner Fred Knapp had a back injury and had to bail on their upcoming tower-climbing trip to Canyonlands, Utah. Their goal had been to take a reporter from The Guardian, a newspaper out of the UK, around the park, and climb a tower while the reporter filmed from the ground. Now that Fred was out, Crusher needed a replacement.

“Are you available tomorrow?” he asked. I said yes.

I’d never climbed with Crusher but had wanted to since first talking with him when I was 20, back in the mid nineties. At 19, I spent six months on the road climbing throughout Utah, including in Canyonlands, and noticed that Crusher’s name was on countless first ascents throughout the areas I visited. During that period, and inspired by Crusher’s legacy, a buddy and I put up a first ascent in the Fisher Towers. A few months after the climb, Crusher called me while he was researching info for Desert Rock III, and we stayed in touch.

Today, Crusher has 150 towers under his belt, 30 of them first ascents. He’s scoured (nearly) every tower in Canyonlands, one of the most remote parks in Utah. And he’s authored the award-winning book Desert Towers. He earned his nickname from the way he squeezes the rock when he climbs. He wears glasses with flip-up shades, has a white beard, and a ring of hair above his ears that wraps around the back of his head.

Crusher wanted to give the reporter, David Levene, more than just a bunch of pretty pictures, and more than just a visit to the vistas the Neck and Grandview, which overlook the 100 mile-long White Rim Trail. He wanted to provide him with an insider’s tower climbing experience. 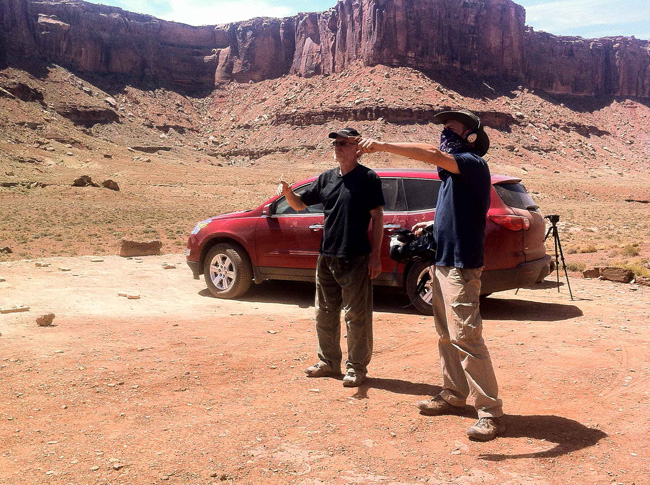 When I met David at our hotel, he was wearing a weathered Tilley safari hat, brown cargo pants and a white T–shirt. He wasn’t built like Bear Grylls, but appeared fit enough. We’re about the same age, mid 30s but he’s taller and thicker. Over dinner he shared stories of documenting the destruction in Haiti, visiting the Heart Attack Grill in Las Vegas, and the Cat Café in Tokyo .

I wanted him to reach the summit of whatever we climbed. In contrast, I’d taken my buddy Vijay, a T6 paraplegic, up a few towers (like Grand View Spire, one in the Fishers). How hard could it be to climb a tower with someone who had never climbed but still had use of all his or her limbs?

Crusher decided we would do the 450-foot Thracian Mare, a crumbly tower located in Taylor Canyon that had seen, at most, a handful of ascents since it was first climbed in the 80s. Crusher didn’t personally know anyone who had climbed it. The guidebook provided almost no beta. We reckoned it would be strewn with ledges covered with loose blocks. Just another day of climbing for Crusher; for me it was a chance to share a challenging summit with Crusher, and, if we could pull it off with David, it would leave a lasting impression on him.

The next morning we stocked up on groceries including jerky, which David called  “chewies.” Next we hit the Pagan Mountaineering shop to get him a helmet and harness. We showed David cams, which Crusher and I referred to as “trinkets,” and carabiners, which we called “clippies.” With this brief climbing intro of trinkets and clippies plus a bag full of chewies, we headed out of town.

At mid afternoon we had reached the parking area. Our route up Thracian Mare was visible from the car. “Looks wide,” I said to Crusher. We knew the route was rated 5.11, and now it looked like it was going to be a long, hard offwidth and chimney. We were going to need all the wide cams we had.

Out came Crusher’s bag of hammers, bolt kit, bag of pitons, cams, carabiners, and other assorted gear. Only clean climbing is allowed in Canyonlands. Piton use is forbidden and you can only replace old, unsafe bolts, not place new ones.

When we reached the start of our route it was obvious why it had fallen into obscurity. The wide crack we would be following didn’t start at the base, but 30 feet up—below it was a big chunk of missing rock, signs that our route had fallen off. I tried climbing it anyway. After surmounting a rotten pile of ball bearings, I entered a fingertip lay-back protected by thin Black Diamond C3s. I had to be careful not to touch anything loose, which meant almost everything.

After maybe an hour of false starts and cries from the peanut gallery that “this route looks terrible,” we finally abandoned Plan A. So much for getting our newbie up a nasty, terrifying spire, I thought. We packed up and headed 10 minutes down the trail to a different route, The Ark. This time Crusher was up for the lead. 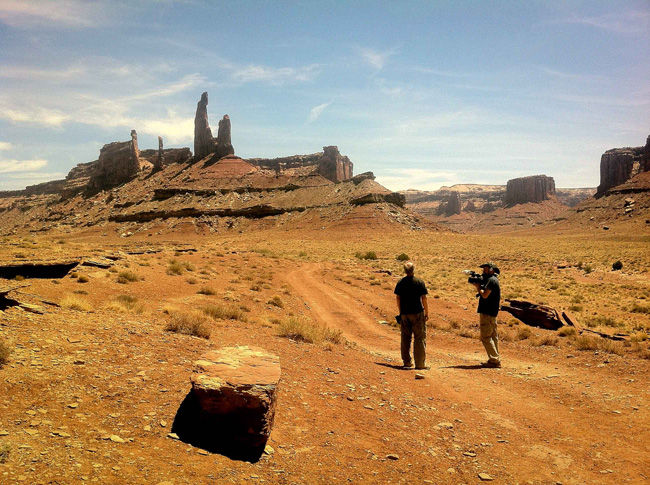 Crusher found the likely start of the route but opted to try his own variation—a possible first ascent—since the wall had many crack options. He climbed a left-facing chimney twenty feet to the left of the original start.

The master of obscure tower climbing, Crusher climbs patiently, in firm control of every move. He taps his knuckles on every face-hold before he commits to grabbing it. He doubles-up his gear placements. As he jammed his way up the corner, I looked around and took in the views while David filmed.

David asked us to climb the route in two pitches so he could document that style, despite the fact that the route could be climbed in a single, long pitch to the summit. Midway up, at the belay changeover, we exchanged gear and I hurriedly (my preferred way of climbing) moved up to the summit ridge, placing cams up to 5-inches to protect the terrain. David waited on the ground. We had to get ropes safely in place first before he could come up.

Once on the ridge, I walked over to the anchor to discover it was absolutely worthless. One bolt had fallen out and the other was sticking halfway out of the rock. I had a mini panic attack. I scoured the ridge for any usable cracks. Eventually, I excavated sand out of a block-like feature by using a pebble, then placed two small units and put Crusher on a rather nerve-wracking belay. When Crusher arrived, he complimented my improvisation and assured me that anchor was not as bad as I thought. Anchors like this are standard fare on chossy towers. For added security I just needed to bury the cams deeper into the crack.

He used the nut tool to further dig out the crack, pulled a few additional cams off his harness, plugged them in and buried the existing cams deeper into the crack. Our anchor was ‘good enough’ for now, but it would be unsafe to bring David up. The bolt kit was back in the car so, for today, we would fix lines using cams. We planned to return the next day, replace the bolts and bring David to the summit.

The next morning Crusher jugged up the tower, yanking and bouncing away on our impromptu anchor, and replaced the old bolts. Meanwhile, I gave David instruction on basic jugging techniques and taught him some mental relaxation exercises—the leaning, flaring chimney would be hard to ascend via jugging even for experienced wall climbers. The plan was that he would stem in the chimney with his feet and knees and push the ascenders up with his arms. Aiders were practically useless.

Once Crusher yelled, “Lines fixed!” we set off.

From the start progress was miserably slow. The first few body lengths went out along a roof, and David—hanging in free space—thrashed and spun around on the rope. Once past the roof, he reached for everything within his reach, whether they were loose blocks or not, and searched for purchase with his big, clunky hiking boots. My attempts to teach him body wedging didn’t really work out.

David’s style was to tense his whole body up, inch his jugs up the rope and then breathe rapidly. Then we’d go through Zen breathing. “Let’s get that RPM rate down,” I said, and then push forward again.

The final scramble to the summit consisted of a nearly vertical narrow ridge. It brought us to a standstill. To solve this, Crusher dangled a series of aiders clipped together like a 12-foot ladder. I shoved David’s feet in the aiders as he gripped the slings firmly, and Crusher assisted him with the rope from above. It was full effort for all of us. 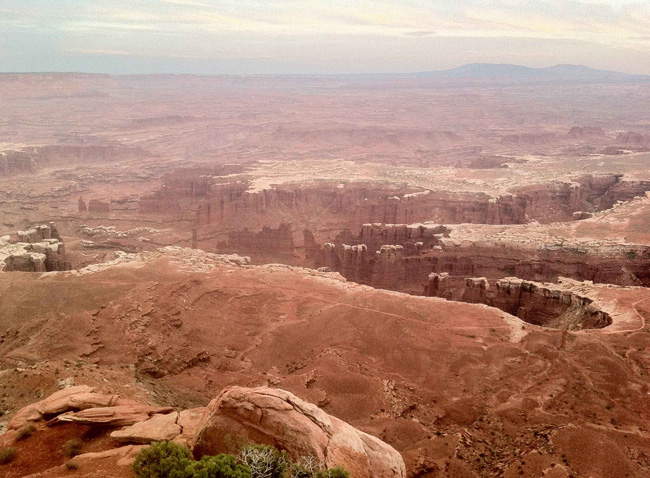 Finally, hours later, the two of us met Crusher on the summit ridge, exhausted. We took in the views and talked about the feeling of climbing in such a remote and vast area: the endless views, total stillness, and the humbling panorama of human insignificance. Then we set up the gizmos: One full sized video camera, a smaller camera, two GoPro video cameras, and several mics. It was time to give The Guardian and its readers a view into our world. As cameras ran, Crusher and I took turns ascending the final 20 feet to the highest point of the tower.

Though we didn’t climb one of the bigger towers in the group, the summit felt as satisfying as most any other. Observing Crusher’s meticulous style, I could see why his specialty was rotten and crappy rock. He thrived on the unpredictable by moving slowly and methodically, and over the years had become deeply attuned to where stability can be found amid the chaos. In contrast, my urgency got me to the summit ridge, but once I arrived, I was ill equipped to deal with what was waiting there.

David worked hard to get up there and back down, and we could tell the experience would leave a lasting impression. Whatever your skill level, what awaits you at the summit is the same. We shared a few moments of absolute stillness gazing down dozens of canyons from our perch on the summit—many of which aren’t even named—reflecting on how it feels to be in such places, why we climb and why we keep coming back.

“Climbing towers is just an excuse to be here,” Crusher said when we’d returned to the base, watching the sun slowly set behind red rock. Then David set up his tripod and took stills of the full moon rising behind the towers.

“Are these for The Guardian?” I asked.

“No, these are for my wall,” David replied.

• David/the reporter used the fully adjustable, supportive Misty Sonic harness.
• He also used the Petzl Elios helmet to protect him from falling rock.
• We packed two pairs of ascenders. Crusher had retired his CMI Large ascenders after twenty years of use and opted to use his semi-new Petzl Ascensions instead.
• I lent David my CMIs, Metolius Ultimate Daisies and a few lockers.
• For Thracian Mare, we carried extra wide cams like the Wild Country 5 and 6 Friend.
• We also carried the Valley Giants.
• Before David left the ground I clipped a few aiders to his harness gear loops.
• I used a GriGri to self belay on the fixed rope
• For the very important task of kneeling on the tailgate of Crusher’s truck when unloading gear, I used the Evolv Ringer mini crash pad, but the Metolius Shield also works great.