The Trail Saw: The Most Useful Tool You Forget To Bring With You 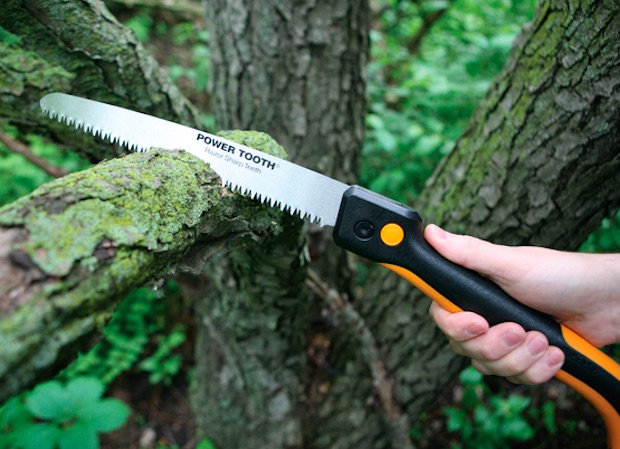 There is something captivating about chopping down a tree with an axe or a hatchet. It can’t easily be explained but it’s generally paired with flannel and soft pulpy chips of wood in a nice big beard. But the fact of the matter is a saw is a better tool for taking down a tree as it requires less effort and provides you with a nice, precision cut – even if it does lack that spirit of an axe or hatchet. But, a saw is a saw and nothing more. Unlike an axe or hatchet, it can’t be used as a hammer, or even a shovel, in a jam. It is a purpose-built tool that performs a specific task. Because of this simplistic approach the saw is one of the most over-looked tools for use in the wild.

In a past life when I was outfitting adventurers in a retail setting, I sold saws to Boy Scouts and the like with the sole intention of building shelters. So, there’s really no surprise that these things aren’t on the top of anyone’s gear list. After all, how many of us take a day hike and stop to build a shelter along the way? Despite that however, there has been a revival in camp saws over the past couple of years, and I’m almost convinced it has something to do with an increase in the number of preppers, survivalists and homesteaders. But either way, with more of these types of saws available to you, we felt that it was time to throw some knowledge into the wind in an attempt to help steer you in the right direction, just in case you choose to start carrying a saw with you into the backcountry.

For the sake of this article, we’re going to focus on the three types of saws commonly associated with the outdoor world: a bow saw, a folding saw, and a pocket saw. All three are compact for easy carry, but they all perform differently.

The Bow Saw:
Bow saws are probably the most traditional style of trail saw. Designed for larger timber, they provide increased leverage and – depending on their length – usually allow you to get two hands on them so you can make quick work of full trees. They aren’t the best for taking a tree down – but they are great for sizing up limbs and logs. In regards to carry, these generally fold from a triangle into a single length of bar (usually aluminum) which houses the blade. 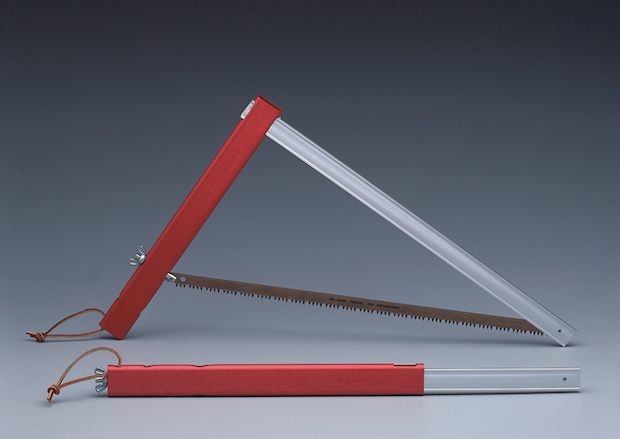 Top Recommendation: The Sven-Saw ($35-$37)
Available in 15” or 21” models, this saw has been around for decades and is a staple in the Boy Scout and Girl Scout world. Hailing from Sweden, and weighing less than a pound, the Sven-Saw has the ability to sail through a 6” log in about a minute. It is constructed from an aluminum frame and features a Swedish steel blade. The frame acts as a sheath when not in use. 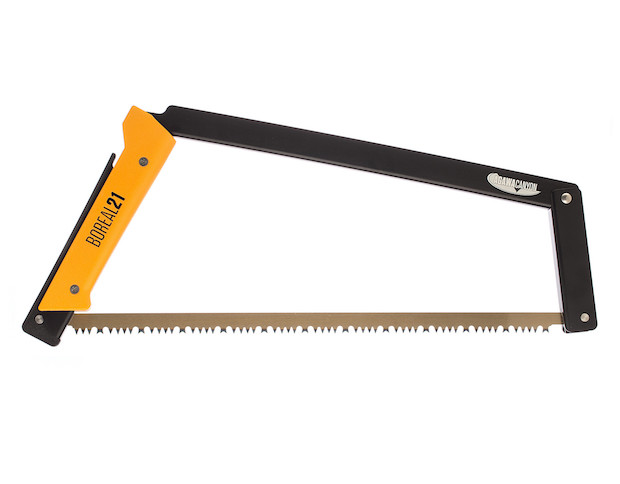 Notable Newcomer: Agawa Canyon Boreal 21 ($65-$69)
Taking its design cues from the Sven-Saw, the Boreal 21 improves on the classic with more intuitive, hinged assembly and a variety of proprietary tooth-patterned blades. Like the Sven, the blade stores inside the frame.

The Folding Saw:
More compact that a traditional bow saw, folding saws are the popular choice amongst hikers and campers alike. Their smaller size makes them perfect for cutting down, and pruning, trees that are less that 6” in diameter. Their performance in generally heightened by a continuous arc or arced handle which is generally designed to be used with one hand. Like a folding knife, the blade stores in the handle when being carried.

Top Recommendation: ARS 210DX Folding Saw ($28)
At a hair shy of 14” in length, the ARS 210DX has been my go to portable saw for a while now. It’s small enough to fit in my pocket if I leave my pack behind, but its 6” blade is a workhorse and has built many shelters over the years without ever needing to be re-sharpened. Besides having a proprietary tooth design, the blade has been hard chrome-plated for rust and sap resistance – which is a major benefit when limbing living trees. 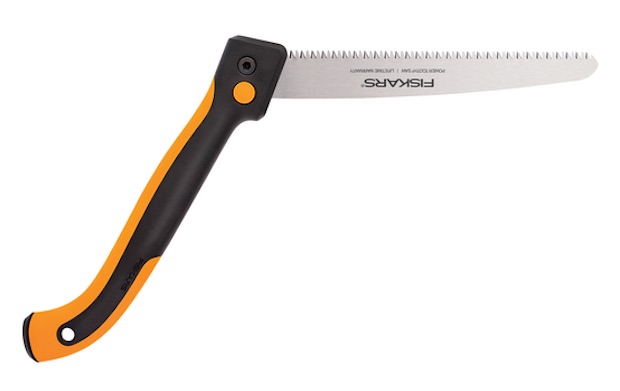 A Worthy Alternative: Fiskars 10” Power Tooth Soft Grip Folding Saw ($22)
Boasting a 10” blade, the Fiskars 10” Power Tooth Soft Grip Folding Saw is probably the maximum length I would recommend for a saw of this size, as anything larger starts to encroach into the bow saw size range. Featuring a really aggressive opposing tooth pattern, the blade can be locked at 180° or 240° allowing for easy cutting in tight places and at odd angles.

The Pocket (Chain) Saw
Probably the most aggressive of the three types of saws, the pocket chainsaw a chainsaw style blade with handles tethered to the end. There is no frame in the design, so the user can wrap it around anything from a limb to a full trunk as long as they can get their hands around both handles to operate it. These types of saws have gained some serious ground with trail maintenance folks as they are light, compact, and fast. 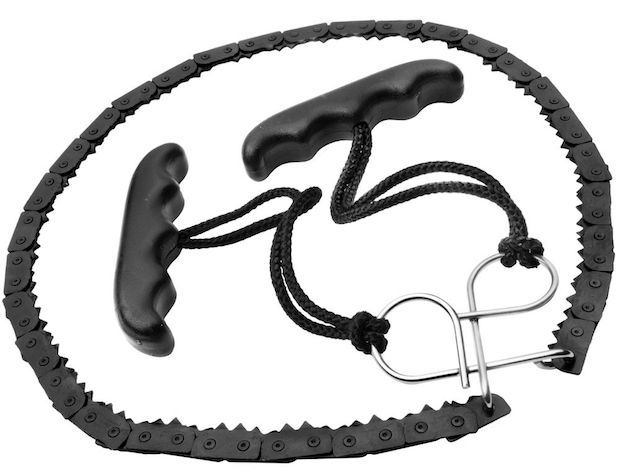 Top Recommendation: Supreme Products Pocket Chainsaw ($30)
Supreme Products Pocket Chainsaw reigns supreme as it’s been around the longest and it’s also used by the U.S Military. At under 6 oz, the chain connects to two hooks and handles when in use and easily stores in a tin when being carried. It has the ability to cut through a 3” diameter limb in less than 10 seconds. 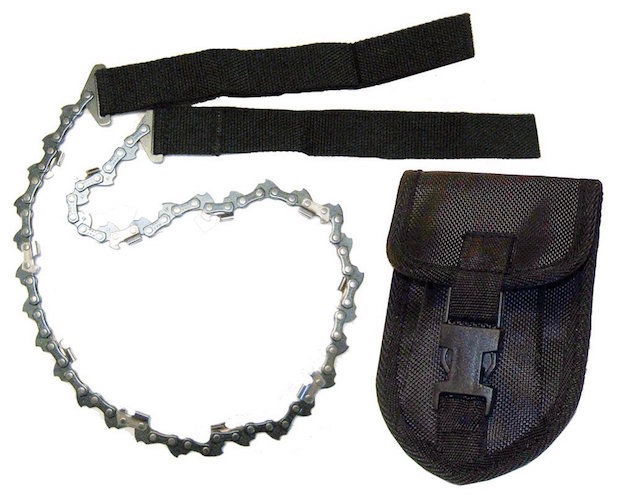 Worth A Shot: Ultimate Survival Technologies Sabercut Saw ($25)
The UST Sabercut Saw is similar to the Supreme Products Pocket Chainsaw in design and function, but utilizes sewn webbing for handles which means that if the chain gets damaged beyond repair, it’s done for. Fortunately these types of saws are super durable and can be re-sharpened frequently.

So, even though a saw is purpose built to only trim through wood, their benefit over axes or hatchets shines through when you’re looking to cut particular lengths, when making more precise cuts, or when you’re trying to get the job done quickly and efficiently. In my personal opinion, the type of saw that will benefit you the most would be the folding saw. All three types have their benefits, but I have found that unless you’re building a cabin or clearing an area of land, the folding saw proves to be the most versatile of the three.

On the other hand, if you are building a cabin or clearing land – the bow saw and the pocket saw would most likely benefit you more as they are made for larger diameter wood. As I mentioned previously, the pocket saw in particular, being the most aggressive and therefore the quickest and most effective, is ideally suited for clearing out large areas, including trails, and paths. On the other hand, the bow saw is great for construction because it allows you to easily cut precise lengths of timber for walls, window openings, and doorframes.

I still strongly believe in the need for an axe or hatchet out in the wild because even though they require more effort, they do perform multiple tasks – some of which are identical to what you can do with a saw. In the end, I hope that in reading this article I was able to shine some light on which path to choose if you do plan on taking a saw on your adventures. But beyond that, I hope you can see the benefit of having one in your arsenal of tools.