For spring 2016 Thule announced the release of two new lines of technical backpacks, both of which are designed to be long on features, but light in weight. With its larger capacities the Versant series is aimed squarely at the multiday travel and  backpacking crowd, while the smaller Stir line is meant to strike a chord with day hikers, climbers, and peak baggers instead. I recently had a chance to put the 35-liter version of the Stir through its paces, and ended up coming away very impressed. Particularly since this bag is so affordably priced too.

You only have to take one look at the Stir to see that simplicity is the name of the game here. Thule went to great lengths to design a pack that has clean lines and a minimalist look that will appeal to a lot of different people. But that said, the bag isn’t lacking for nice features that help it to stand out in a very crowded field of similarly sized daypacks either. For instance, the Stir doesn’t have a lid in the traditional sense, but the interior is instead protected by a storm flap that still manages to keep moisture at bay without adding much in the way of extra weight. 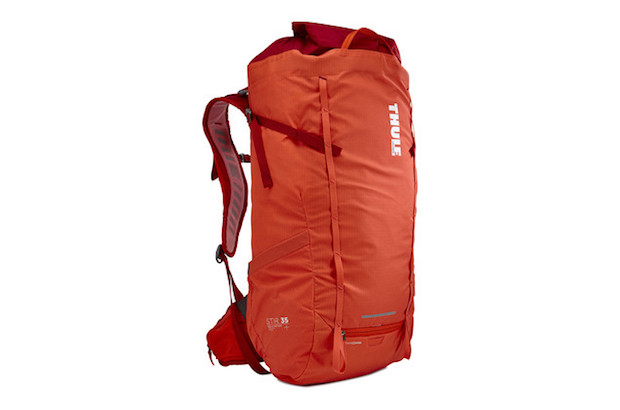 Speaking of protection from the elements, the Stir also employs Thule’s StormGuard system to keep the bag – and its contents – well shielded from the rain. The bottom of the pack is equipped with a waterproof liner, while the top can be shielded with an included partial rain cover should inclement weather strike while you’re on the trail. The system works very well, creating a bag that is remains safe in poor conditions while still allowing access to the Stir’s intrior.

One of my favorite features of this bag is the side zipper that grants full access into the Stir’s main compartment. This is something that is quite common on larger backpacks of course, but I’ve seldom seen it implemented on a smaller daypack such as this one. Opening the zipper allows you to locate and retrieve the important items you need from inside the Star at any time, no matter where they happen to be located. This makes it easy to grab a rain jacket that you’ve placed on the bottom of the backpack for instance, saving a lot of time and effort from having to shuffle through everything that you brought along with you on the hike. 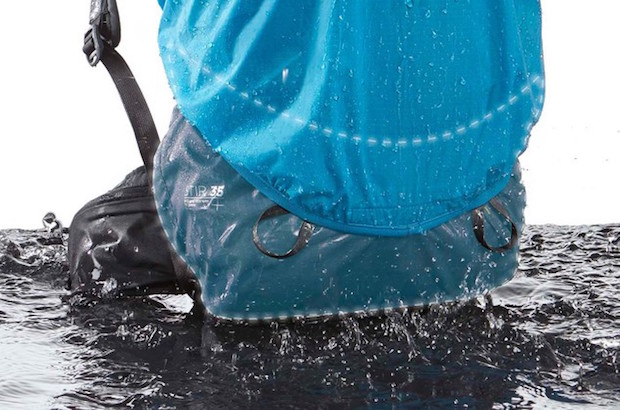 The Stir 35L is available in gender specific models, but Thule was wise enough to know that one size generally doesn’t fit all. That’s why they’ve also implemented an backpanel that can be easily adjusted to fit a wide variety of torso sizes. It takes just a matter of few seconds to dial in the appropriate fit, and you’ll end up having a pack that feels like it was custom made for your body. This helps when carrying heavier loads in particular, but I found it to be of benefit even when the backpack was only moderately full too.

Those amongst us who like to count ounces when deciding which gear works best for our needs will probably find that the Stir is a bit on the heavier side. It tips the scales at 2.2 pounds, which makes it about average in terms of weight for this size category. But, both the hipbelt and sternum strap can be removed to help shave off some of that bulk, making this a truly minimalist pack for those who are willing to do without those two items. 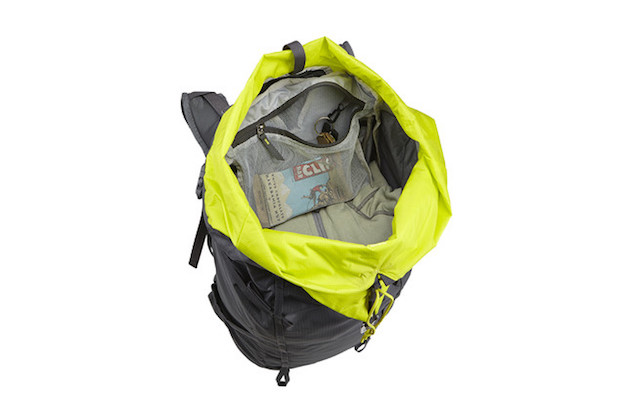 Other nice touches to the Stir backpack include a stretchy pocket on the shoulder strap that is designed to accommodate a large-screen smartphhone, two attachment loops for carrying trekking poles or ice axes, and a separate light loop attachment too. It also features a surprisingly large stuff pocket on the front that is very handy for keeping important gear within easy reach. Of course, the pack is also hydration ready, includes reflective elements that make the bag easier to spot in low light conditions, and offers 2135 cu. in. of storage for hauling around all of your important gear.

As if all of that wasn’t enough, Thule made the Stir from fabrics that resist abrasion and wear and tear remarkably well. I’ve used the bag in a variety of conditions over the past few weeks, even managing to get caught in some serious rainstorms along the way. But my test model still looks brand new, which bodes well for how the Stir will hold up over the long haul. Judging from my early impressions, I’d say that it is likley to be a companion that will accompany you on many future adventures. 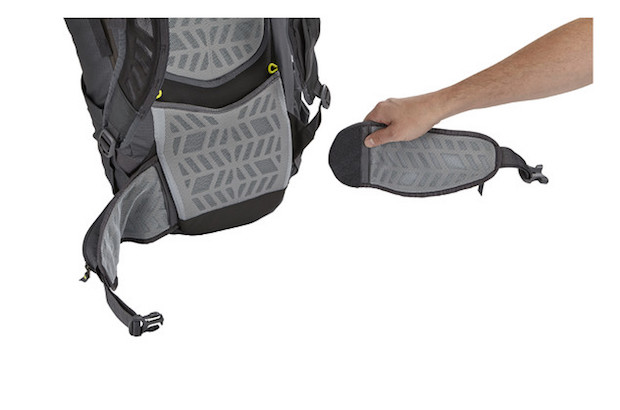 I mentioned early on in this review that the Stir is priced very well when you consider everything that it brings to the table. Thule is selling the pack for just $139, which for my money makes it a good bargain for anyone looking for a versatile and durable backpack to accompany them on their travels. In fact, I think that is is quite simply one of the best new packs I’ve seen in awhile, and I think you will too.

Find out more on this, and many other Thule products, at Thule.com.