The Flying Tent is a Tent, Bivy, Hammock and Poncho All in One 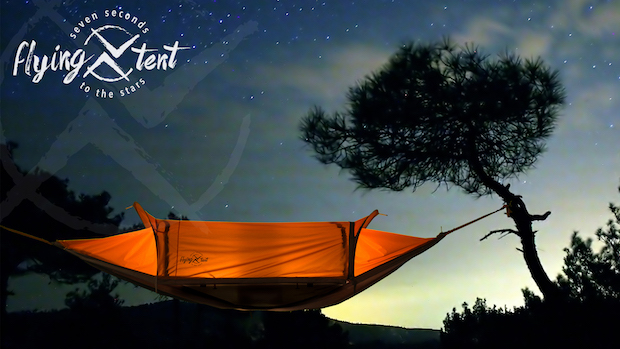 We first touched on this story in our Week in Gear article posted last Friday, but we thought it was so interesting that it warranted a closer look.

The Flying Tent is everything in one; a tent, bivy, and hammock that even has the ability to be worn as a poncho! Normally, projects such as this one are enough to raise an eyebrow, but a quick look at the scale tends to show us that such a product weighs too much and is paired with overly ambitious and complicated design. That doesn’t happen to be the case this time. 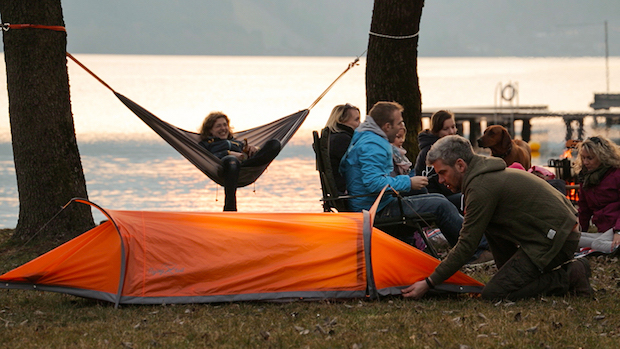 The basic design of the Flying Tent is essentially a reinforced hammock that can either be suspended above ground between two trees (or reinforced stakes) or assembled as a simple shelter on the ground. Built-in tension poles give the tent some structure, creating a capsule that campers can sleep inside.

The magic in the Flying Tent is in the compartmentalized sections and the ability for it to go up in as few as 7 seconds. It has a zip-off waterproof roof for rain protection with ventilation on both ends, as well as a mosquito net to help keep nap-interrupting bugs at bay too. Both rainfly and mosquito netting can be removed to create an open hammock, which also doubles as a poncho on the trail. This is a clever way to minimize your gear load and maximize utility from the few pieces you carry with you. 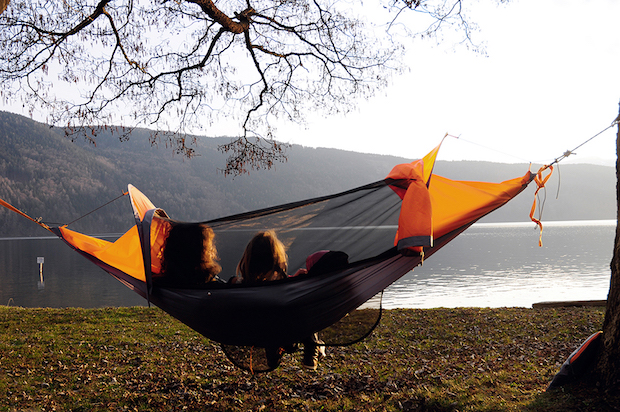 The Flying Tent is an already-successful Kickstarter project that can be found here. It reportedly is made from high-quality materials and weighs just 2.64 lbs. It will also packs down to 15.7×13.4×1.6 inches, and has a hydrostatic rating of 5,000mm, which basically means that it performs well in wet weather. The entire system is expected to start shipping in July with a retail price of about $319.

For more stories and reviews of tents, check out our Hiking and Camping page!