The FlyBoard Air Gives Us a Glimpse of the Future 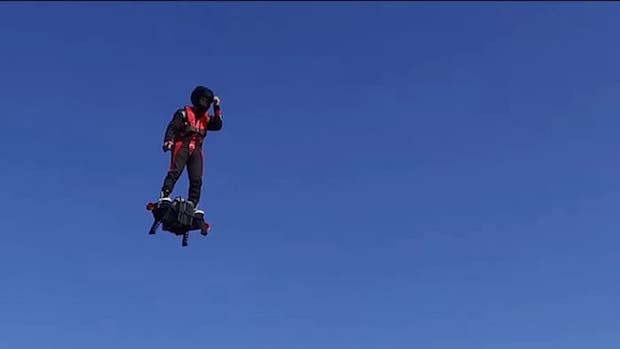 There is a place in the desert where fantasy is real. Islands appear in the middle of the ocean, buildings grow higher into the sky than anywhere else on Earth, and now people fly.

Zapata Racing, the same company that brought you the water jet pack and invented FlyBoard Racing now brings you a real “jet pack” called the FlyBoard Air. Using extremely powerful air thrusters and a portable battery, the Zapata Racing team has successfully created a platform that seemingly hovers above the ground. It can allegedly fly up to 10,000 feet in the air and race along at a maximum speed of 93 miles per hour. Zapata, the jet ski champion and inventor, says that the FlyBoard can perform for up to 10 minutes of autonomous flight.

The tests were all performed over water because parachutes are useless at this low height. Unfortunately, the FlyBoard Air is only available as a prototype, but, you can hopefully see it soon. Probably in Dubai next to the Exotic Car Dealership and Rental.