Selecting The Right Blade for the Backcountry

This may sound obvious, but the edged tools you carry with you on your backpacking adventures should differ from the ones you carry in your every-day life. That’s not to say you won’t bring some of your everyday carry (EDC) tools on those adventures. But in environments that require a full backpack I have found that most people will need something more substantial than their EDCs.

Famed survivalist Cody Lundin says, “Everything you carry should have at least two functions.” Anyone familiar with him knows that he is a minimalist who has survived in many environments without shoes and with only a slight knife. In most cases, he wears a lanyard around his neck holding a small knife similar to a Puukko knife (commonly sold in North America through Morakniv or Helle of Norway). With that blade he filets fish, cuts firewood, drills holes, and generally survives. In short, by thinking outside of the box with this type of knife Cody has redefined what a “backpacking” or “survival knife” could be.

One of the biggest innovations I’ve seen—if a stone-age practice can be considered an innovation—is the use of a rock or thick branch to hammer a small blade into a large piece of wood to create kindling. This practice, in essence, creates a tool that eliminates the need for a hatchet. It’s a method known as “battoning” and it’s a painfully obvious function that a lot of people overlook. But that’s Cody—he keeps it simple and points out these types of things. 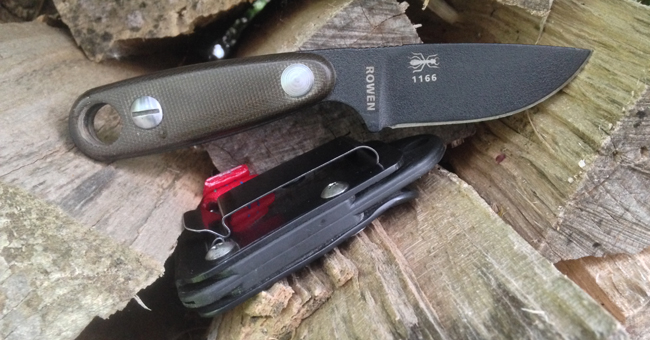 I recently tested this approach with an ESEE Izula-II, which is about 3-inches shorter than the type of knife Cody uses, but the blade is about the same length. I was able to do many of the same things he was doing but without the pressure of “surviving” on my back.

Still, there are strong arguments for carrying something more substantial. Though I was able to chop firewood and could conceivably defend myself from a wild boar with the ESEE Izula-II, there are more substantial alternatives out there for people looking to complete a task more efficiently.  No, you do not need the knife Rambo used in those epic movies, but you should have a blade that offers some of the same traits.

Drop Point or Spear Point tipped blade. Both tip shapes can be used to complete a multitude of tasks, including defending yourself.

A longer blade. I don’t think you need to carry a sword with you, but a knife with a blade that is longer than four inches helps make quicker work of anything.

Serration.  I know, I’ve told you in the past to avoid serration. But it makes for a great saw edge in many instances. You do not need it—you can always chop through materials—but you may find that a serrated edge requires less effort than chopping, and is more efficient (less loss of material).

A bare metal edge. This is one of my pet peeves: Knife makers frequently forget that we need a bare metal edge to start a fire. Many of the survival knives today feature coated blades: titanium coating, powder coating, etc. Though these coatings help keep blades clean and free of corrosion, they make it exceedingly difficult to start a fire using a Ferro rod, also known as “flint and steel” fire-starting. 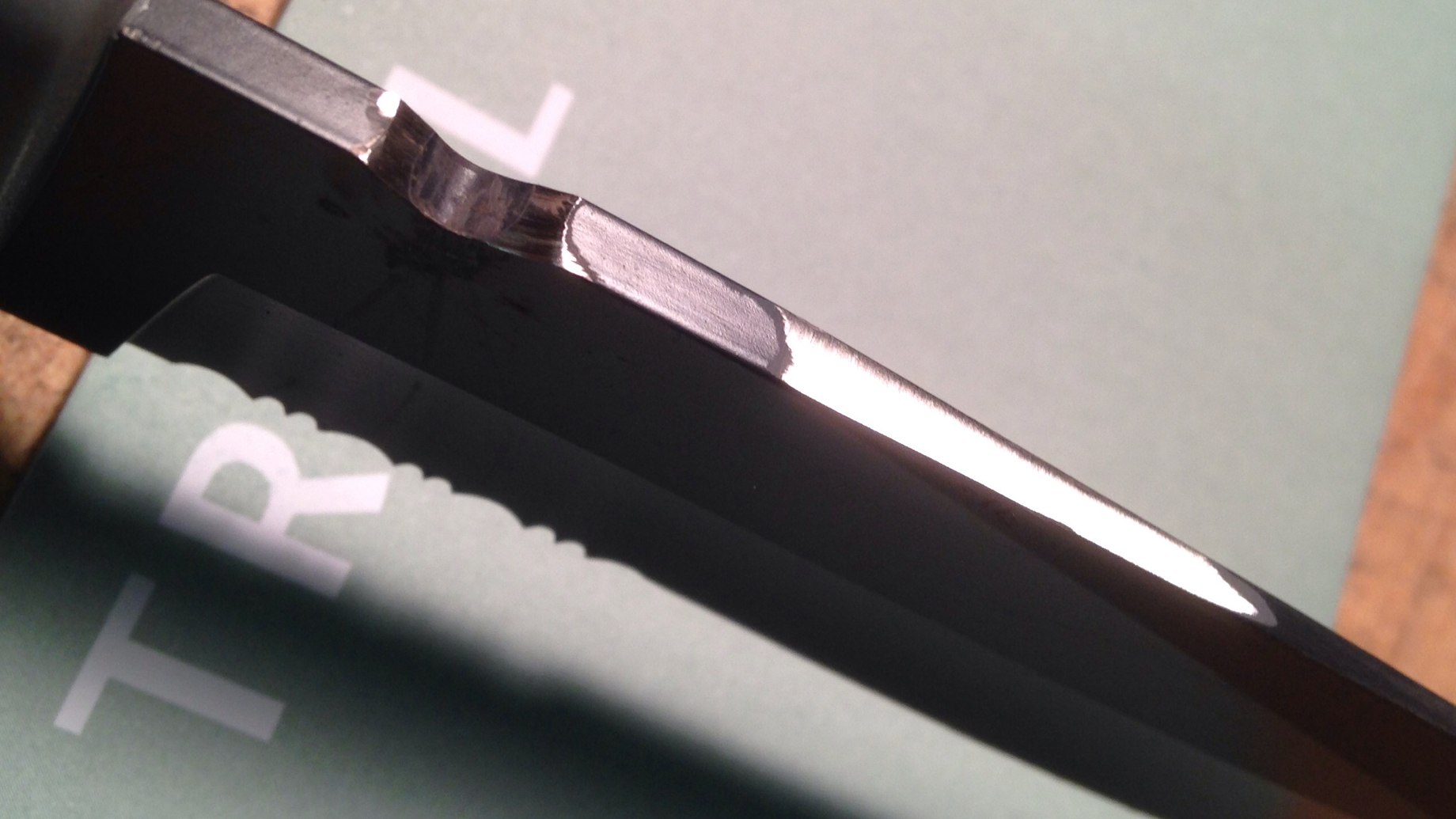 When using a coated blade to start a fire, it is usually recommended that you run the flint (Ferro rod) across the sharpened edge of the blade. I will only recommend this if you are using a soft magnesium block or you will destroy the edge of that knife blade—and you are most likely going to need that sharp edge to complete your journey. I am not saying to avoid knives that have this type of coating. After all, you can easily clean the blade and preserve it for your next adventure if it has this coating. I am also not saying that you cannot get a spark from a blade that has these types of coatings.  In some cases you can but you may end up getting frustrated and giving up before you start a fire. My recommendation is to find a part of the spine, maybe about an inch long, and file off the coating. This will preserve the overall form and function of the knife, but it will also allow you to make fire when necessary. Additionally, some knives of this caliber have a notch designed into the blade that will allow you to “fire it up.”

Other features to look for in survival knife include:

A full tang.  A full tang knife is a knife that is constructed out of one piece of metal, from tip to tail. This makes the knife incredibly strong because there isn’t a breaking point – the metal does not merely go into the handle, it goes through it. A knife of this nature can be used as a hammer, a hatchet or a pry bar.
NOTE: DPx Gear currently offers a folding knife with a secure locking device—the RotoLock—that prevents both accidental and intentional closing of the blade when the lock is secured. See review here.

KISS that knife—As in Keep It Simple, Silly. Current trends have knife makers adding a lot of extra bells and whistles to knife sheaths. I’ve seen sheaths outfitted with signal mirrors, whistles, stash pockets, and even compasses. Although the manufacturers have the right idea behind these additions, a lot of the doo-dads and knick-knacks eventually get lost, or break, or simple don’t meet your needs (or demands). The three items that I do suggest be integrated into a sheath are: 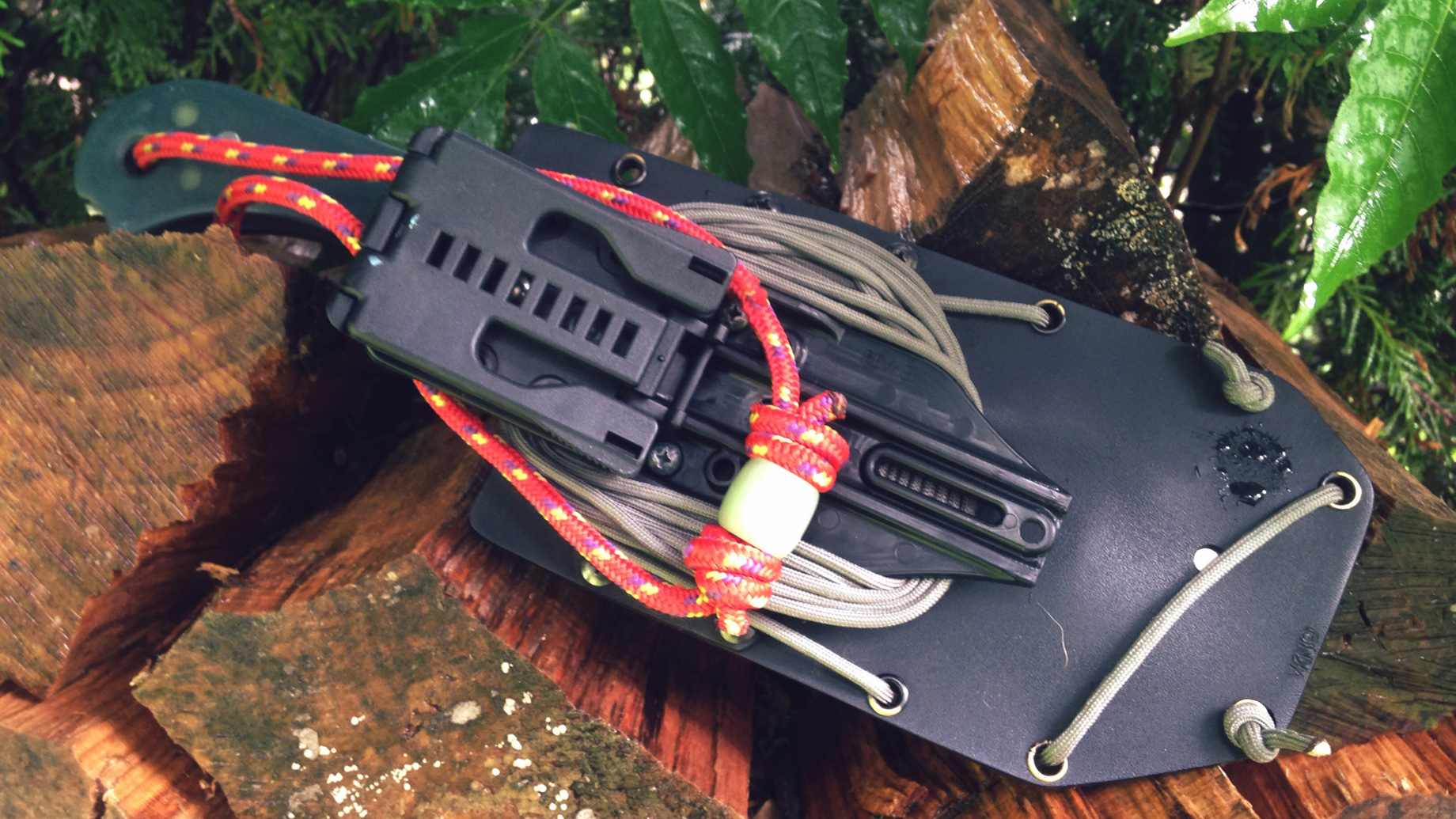 At the end of the day, one of the most import considerations for select a knife is personal comfort. There’s no use in carrying around a tool you aren’t comfortable with. Get hands on with the knives at your local outdoor store. Put a few different ones in your hand; maybe even hang them off of your belt and see how that feels.

If you fail to find the knife that fits you and your needs, consider having one made. There are myriad custom knife makers out there. Just be aware that these knives carry a hefty price tag.

Among the knives currently on the market that I heartily recommend:

Benchmade 162 Bushcrafter. This is a classically designed, lightweight bush knife made from high quality steel and featuring a drop-point style blade. It includes a leather sheath and comes with a flint rod. She’s pretty and effective.

ESEE Izula-II. The Izula-II is the best knife for my needs in many situations, but all of the knives in the ESEE series are designed to help you on your adventure. For this manufacturer, model numbers go up, so does the blade length.

Morakniv Bushcraft Series. I am picking this series of knives because they break my rules about thickness and knife tang, but they don’t break. They feature blades that are 1/6-inch thick and are three-quarter tang instead of full tang. I have used these inexpensive knives in many different situations and they have not failed me yet though other knives of the same build have. I would recommend this to the experienced user only. 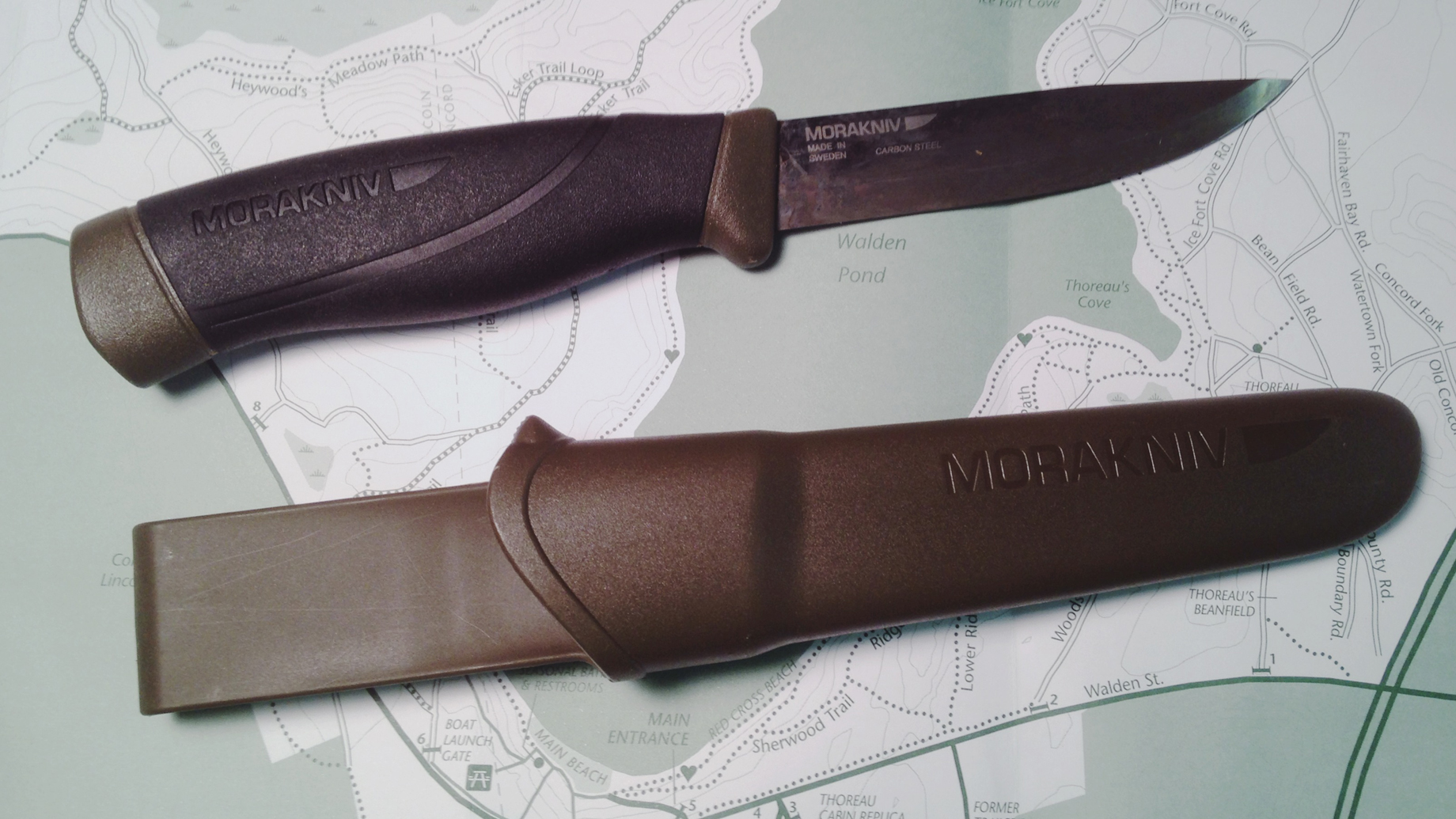 CRKT HoodWork Survival Knife. Designed by survivalist Karen Hood, this beauty isn’t even out yet—but the anticipation for it has grown like wild fire. It features a drop-point blade with serrations and G-10 hand scales form improved grip.

Ka-Bar / Becker Companion. Coming in at 1 pound, this is the beast of the bunch. It can chop, pry, and hammer with the best of them. It breaks my rule of “blade coating” but I’ve worked around that. You won’t mind beating the snot out of this knife. 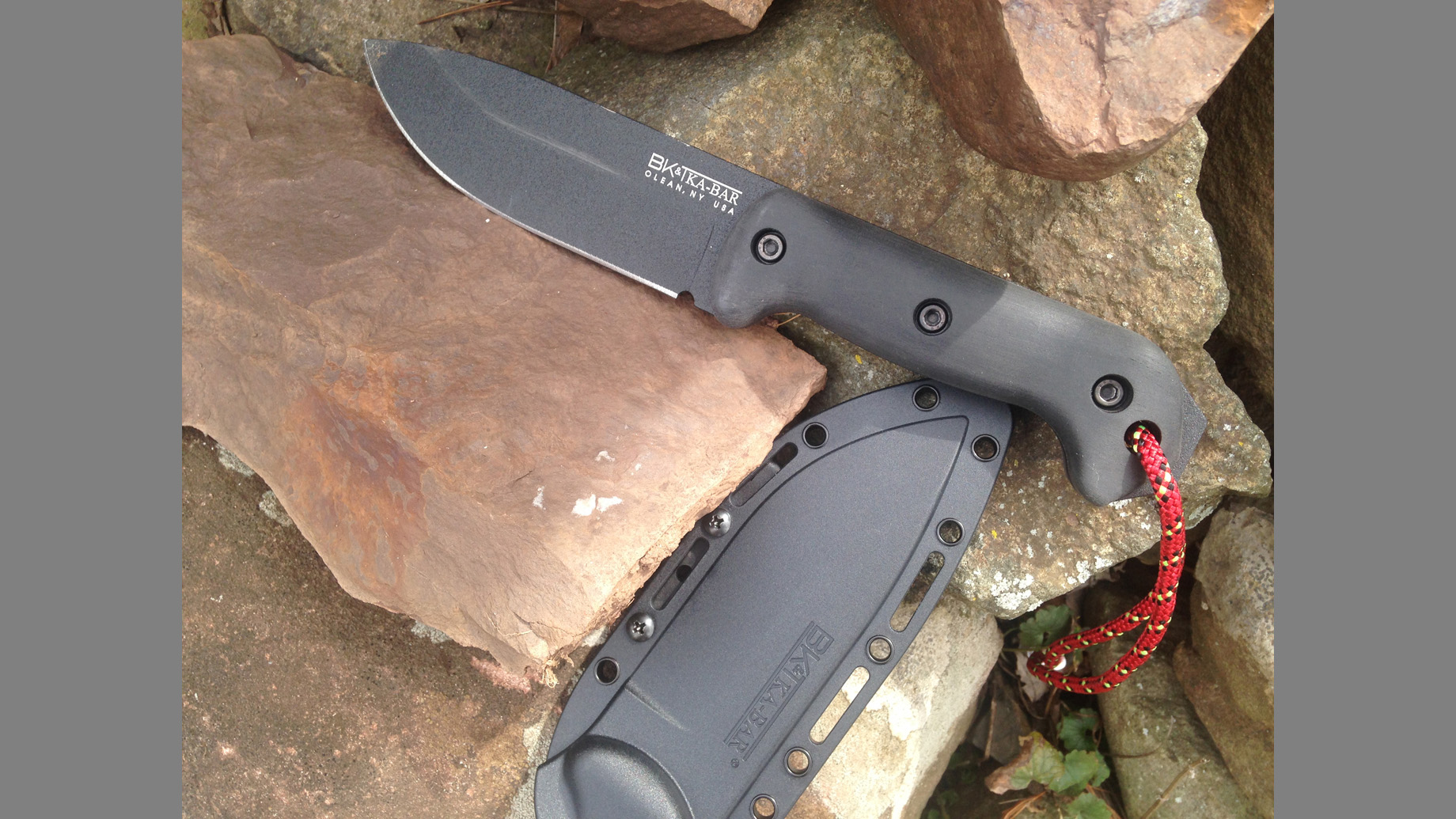