The Apple Watch as a Fitness Accessory 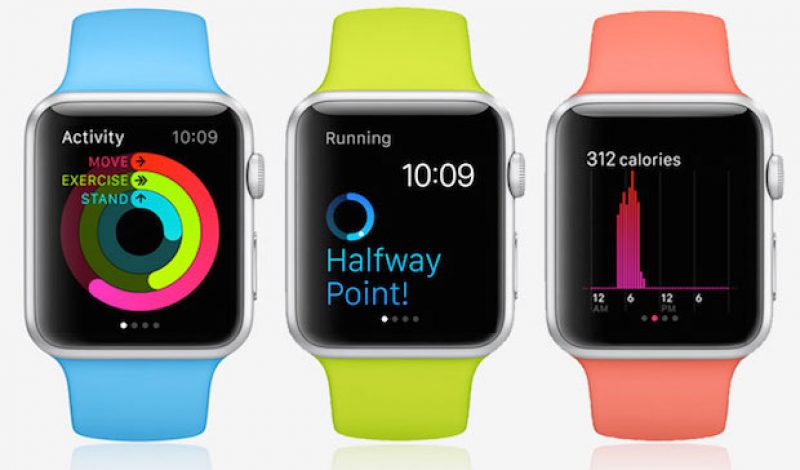 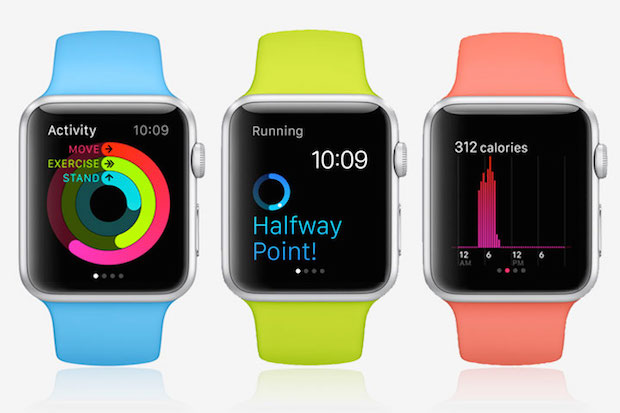 The Apple Watch has been available for more than two months now, and by most accounts it is another bona fide hit for the tech giant. Since its release, the device has been highly touted for its ability to put information such as text messages, app notifications, and calendar appointments right on your wrist. It can also run its own apps, make purchases using Apple Pay, remotely control the camera on an iPhone, and even serve as the key to your hotel room. But for many, it is the Watch’s ability to function as a fitness device that is most intriguing, with many users reporting a heightened awareness of their activity levels as a result of wearing one. So just how well does it stack up as a training aid for dedicated runners and cyclists? As it turns out, surprisingly well.

Although the Apple Watch was initially released back on April 24, it took another six weeks for it to appear in retail stores while Apple struggled to catch-up with hundreds of thousands of preorders. But a few weeks back I was finally able to get my hands on the Sports Edition of the Watch, which features a stainless steel case and a specially designed fluorolastomer band that is both soft and comfortable to wear. In fact, I’d say that it is easily the most comfortable sports watch that I’ve ever worn, in no small part because it is also smaller and lighter than I expected too. And since this is an Apple product, it also happens to look good. That means this is one fitness-centric device that you won’t mind having on your wrist when you aren’t working out.

Apple has put the fitness features of the Watch front and center by creating a clever app that keeps track of your activity throughout the day. The app will record the number of minutes you spend exercising and estimate your calories burned based on height, weight, and sex. The device’s built in heart rate monitor is sensitive and accurate enough to register just how vigorously you are working out, and quantify that activity accordingly. It also knows when you’ve been sedentary for too long and will prompt you to stand up every hour too. The data for each of these variables is then shown on screen in the form of concentric circles that fill in throughout the day. Watching this graphical display of your activity can be quite addictive, and on more than one occasion I found myself looking for ways to complete my circles before the day had ended. 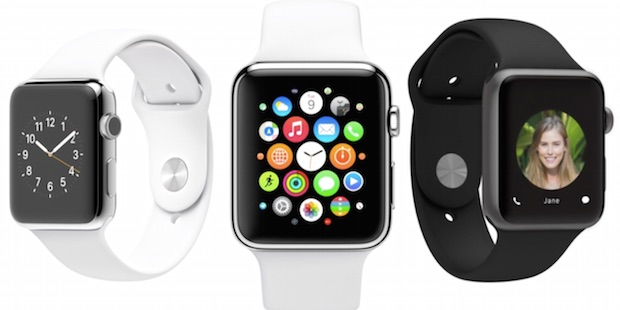 As useful and motivating as that app is however, it doesn’t offer much more than what you would get from wearing a Fitbit. That is to say, that while it will probably suffice for the more casual fitness crowd, it won’t really bring that much to hardcore runners and cyclists. If those were the only fitness features that the Apple Watch offered, it would probably be a major disappointment for outdoor athletes. Fortunately, this is just the tip of the iceberg.

In addition to the activity monitoring features of the Apple Watch, each model also ships with a fitness app preinstalled. That app is meant for use with those who take their workouts a bit more seriously, and demand a higher level of performance from the timepiece they wear while running and cycling. This deeper level of integration helps to move the device out of the Fitbit category and onto a level that is closer to fitness watches that we’ve seen from the likes of Garmin and Suunto.

Launching the fitness app provides users with several pre-calibrated workout options. They include both inside and outside runs and bike rides, as well as options for walking, rowing, and using the elliptical machine, amongst others. Sadly, there is no distinction between a trail run or ride, which is something I’d like to see rectified in the future.

Tapping the workout you are about to embark on will allow you to set specific goals such as miles run, calories burned, or total exercise time. Those goals can be tweaked as needed over time, and the Watch will actually challenge you to up your game when you start hitting your exercise numbers on a regular basis. Better yet, the data is saved so you can monitor your performance over time, allowing you to see the impact of your workouts while working towards higher levels. 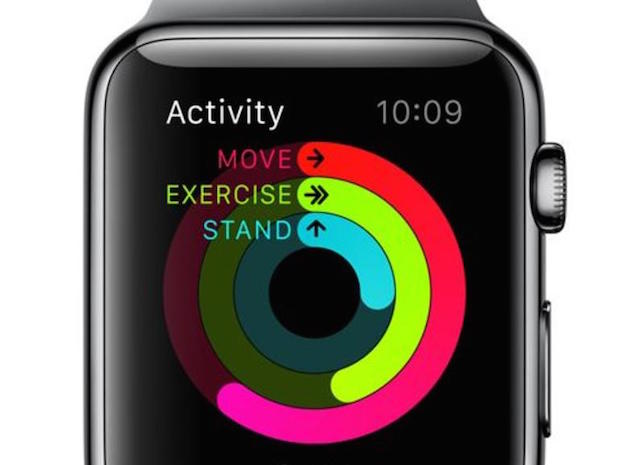 Using the Watch on almost daily runs and bike rides over the past few weeks, I’ve quickly grown accustomed to the wide variety of information that it provides. Since it is paired with an iPhone, the Watch offers very accurate GPS data for mileage, and the estimates for the number of calories burned seem solid as well. The Watch’s built-in heart rate monitor is also quite accurate, with numbers matching very closely with those recorded using a standard chest strap monitor. When combined with data such as time working out, pace, and distance, runners and cyclists now have some easy to use tools to help monitor their progress over extended periods of time.

Data recording isn’t the only features of the Apple Watch that outdoor athletes will appreciate. The device also allows us to control our music or podcasts without having to touch our iPhone, and it is useful for keeping track of incoming text messages or phone calls while working out too. While I typically run or ride to escape those kinds of distractions, I must admit it is nice to see who is trying to reach me at a simple glance. The same is true for other types of notifications as well, which allows me to stay more connected – and possibly safer – while out on a run or ride.

As great of an exercise companion as the Apple Watch is, it does come with a few caveats. For instance, while the Watch can estimate distances traveled without being paired to an iPhone, that data is much more accurate if you take both devices with you on your workout. Some runners and cyclists will find it annoying to have to carry both gadgets, but in order to achieve the higher levels of accuracy it is a necessity.

Battery life is also a concern as well. My old Suunto Ambit is capable of going two weeks between charges when used with almost daily runs. The Apple Watch on the other hand must be charged everyday, and its battery life is cut significantly short following longer workouts. While I have yet to have the device run out of juice on me partway through the day, it is something that needs to be mentioned none the less.

Since the Watch is still relatively new, there is lots of room for improvement in its app ecosystem too. That will happen this fall when the device gains the ability to run native apps directly on the hardware itself. This should greatly improving speed and overall performance in a number of key ways. Currently all of the apps installed direclty on the Watch are from Apple, but in a few months the company will begin allowing third parties to install their software on the timepiece too. That means we should see some impressive options from the likes of Strava and MapMyRide just to name a few. Right now, most exercise apps are hamstrung by Apple’s current restrictions, but they’ll all get better access in time. 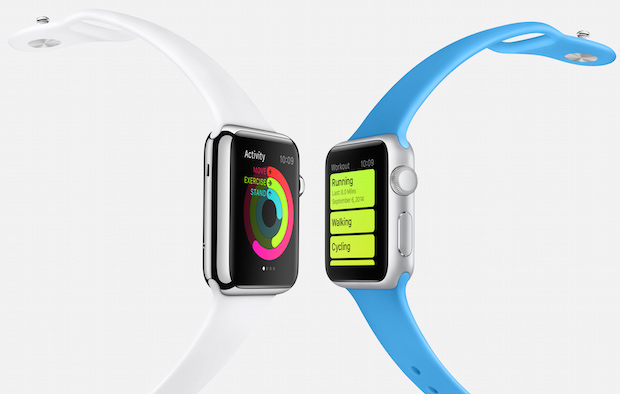 Durablity is a bit of question mark as well, even though my Apple Watch doesn’t have a single scratch or scuff on it it just yet. While it appears to be very well built, the Watch doesn’t have the same level of ruggedness that many other sports watches have. It is water restant, and it brushes off day-to-day wear and tear with ease, but it remains to be seen how it fares over time. It is a sleek, beautiful looking gadget, but it also feels somewhat fragile. We’ll just have to see how it holds up over time.

All of this begs the question of whether or not the Apple Watch is the right fitness device for you. For most of us, I’d say that it not only meets our needs quite nicely, but actually exceeds them in a lot of ways. With its simple, yet additictive, fitness app Apple has managed to gamify exercise, which is just the incentive that many people need to not only get started, but also continue. The options for setting goals and tracking progress are fantastic, and will be very helpful to many people.

But if you’re a hardcore outdoor athlete you may still prefer to use a sports watch with more dedicated features. For instance, the Garmin Fēnix and Suunto Ambit both offer much of the same functionality, but provide features that Apple’s wearable just isn’t capable of. It can’t track vertical gain or descent for instance, nor does it offer GPS wayfinding, or ANT+ compatibility.

If those things aren’t all that important to you, the Apple Watch is a wonderful companion on training runs and rides. It is accurate, offers a ton of features through its growing app selection, and it is bound to only get better over time. Its ability to encourage exercise and fitness is surprisingly great too, which makes this one gadget that may actually get its uers to be more healthy.