First Look: In the Sawtooths with Scott

It was the second day of a backcountry ski trip to the Sawtooth Mountains in Idaho when I, as gracefully as possible, fell backwards into a tree well while trying to pull off a particularly tight quarters kickturn. The snow was deep and conditions were what dreams are made of on this bluebird day in Meadow Bowl. There are worse places to be than up to your waist in powder on a spring day in Idaho – unfortunately my skis were off at this point.

It snowed over a foot on the Sawtooths the day we arrived in Sun Valley for a trip organized by Scott Sports. There was so much cloud cover that my flight was diverted to Twin Falls. We were bussed up to the Sun Valley airport – a fairly common occurrence according to the locals on the flight. But being diverted because of snow on your way to ski is anything but disappointing.

Idaho’s Sawtooth Mountains – Meadow Bowl & There and Back Again chute.

After struggling for a while, I managed to get myself out of the tree well and back on the skin track up the Bowl. The previous day we had skied in some variable conditions –breakable crust with heavy snow underneath, above an icy layer of hard coral. Today we ventured over to this north-facing slope to see if we could find some fluffy stuff that had been protected from the sun. We were not disappointed, and got in some of the best turns of the year. 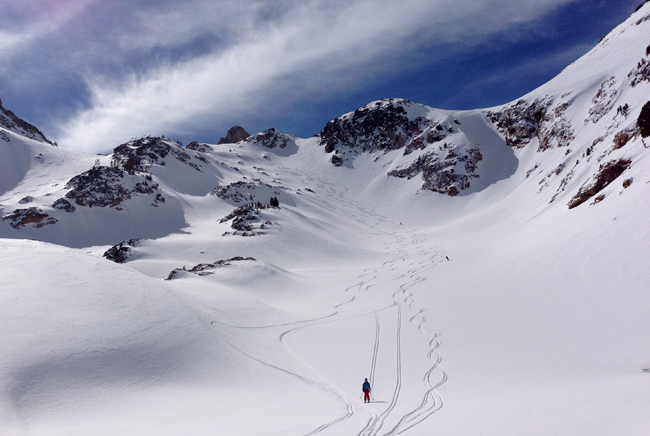 Each day began with our guides from Sawtooth Mountain Guides discussing that morning’s avalanche report, weather, current snow conditions, routes and possible hazards the group may encounter. If you infrequently visit the backcountry, or are a veteran backcountry skier in unfamiliar territory – I highly recommend using the services of a guide. Not only did our crew get to see and ski some great terrain, the guides cooked some of the best meals I’ve ever had in a yurt.

Adam Greene and Topher Plimpton from Scott Wintersports organized the trip and provided our gear. Founded in 1958 in Sun Valley, Scott is credited with inventing the first tapered aluminum ski pole and the first foam vented goggle.

While they may be well known for their goggles and poles, Scott also has an impressive lineup of ski equipment and we got to put some of their newest pieces through the paces. I was skiing the Rock’Air 183’s which are 105 underfoot and extremely light – coming in at 1710(g) or about 3.75lbs per ski – which was essential considering the big vertical days we were cranking out. They feature a sandwich construction using Paulownia wood and carbon stringers that add some torsional rigidity. These guys were right on the money in powder and despite their light weight, very manageable in the heavy cream cheesey snow we encountered lower on the mountain. It was easy to see why they’re going in this direction with the terrain we encountered right in their backyard.

The Scott Rock’Air from their lightweight backcountry collection

The highlight piece of gear for me, was the Scott Cosmos boot. Scott bought Garmont’s ski boot sector last year and will be bringing their alpine line back to the U.S. under the Scott name. I was excited to get into a pair of the Cosmos, despite the fact that I knew it was a risky proposition to take a new pair of boots off the rack for a three day backcountry trip. The boots worked great – not just because I stayed blister free, but also because these things are really light. Skinning and hiking were a breeze and they provide plenty of movement in walk mode – while transitioning was an easy flip of a lever into ski mode. The size 27.5 pair I wore weighed in at 1450(g) or just over 3lbs per boot. Check out Jeff Burke’s review of the Garmont Cosmos, and stay tuned for a full review of the Scott Cosmos (which, with the exception of a newly re-tooled tech fitting, and the addition of a power strap – is basically the same for next year). 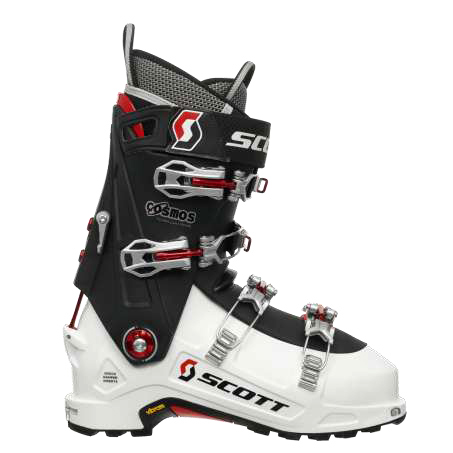 Scott’s new LCG (Lens Change Goggle) was comfortable and features an intuitive slider that allows for quick and easy lens changes. I’ve been skiing in the Smith IO/X this year and I found performance to be comparable (maybe even a little better due to the LCG’s ability to keep snow out of my eyes – my Smith’s are so highly ventilated that even snow gets in occasionally). Another nice feature is the hard-sided lens holder that comes with them to protect your spare lens while it hides out in your pack or pocket. 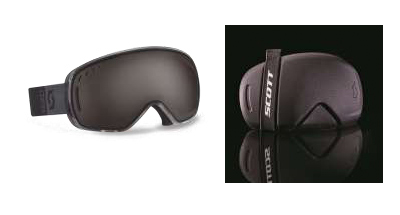 As for apparel – I was rocking the Explorair NG Pro Shell New Generation 3L pant – and it looked good (if I don’t say so myself). It was highly breathable and I used the zip vents only when I was working the hardest. I did notice that they had some small tears at the bottom at the end of the trip probably due to a somewhat hairy exit we made through the woods on our last day. 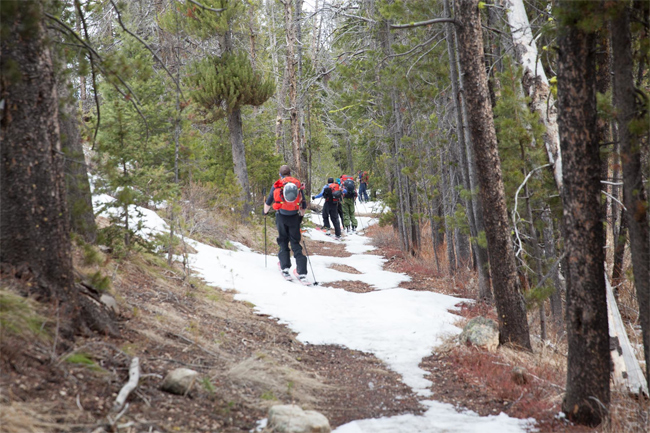 Some thin cover on the way out… Photo: Mike Schrif.

We were in good hands traveling with Sawtooth Mountain Guides – Guide Chris Lundy is not only part owner with his wife Sara, but also former director of the Sawtooth National Forest Avalanche Center. Despite a heavyweight like Chris nearby we all wore Scott’s Air 30 RAS Pack, which – thankfully – no one deployed until Skiing Mag’s Associate Editor Kevin Luby fired his off on the side of the road at the end of our trip. 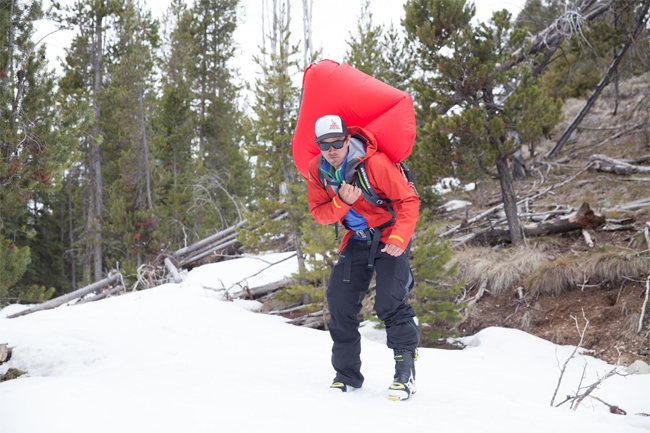 Back in Ketchum we celebrated with steak and beer at the Pioneer Saloon, recounted highlights from the trip – deep pow, late night games of Catch Phrase in the hut and a memorable afternoon kicker session. We may have been there to experience Scott’s robust line of ski gear, but we also got to enjoy a special part of the country in some killer ski conditions.