Spring Break on the San Juan

Ahh, spring break for the kids in in Northwest Colorado. That can only mean one thing: time for the annual six-day, 54-mile river trip on southern Utah’s San Juan River, and testing the latest crop of miscellaneous river gear in the paddling process. In all we had 11 kids and eight adults along, wallowing in mud, swimming in side canyons and belting out songs—and joining impromptu talent shows—around the campfire, with four rafts, three paddleboards, a canoe and an inflatable kayak as our beasts of burden, and one ragged gear journalist taking notes the whole way. 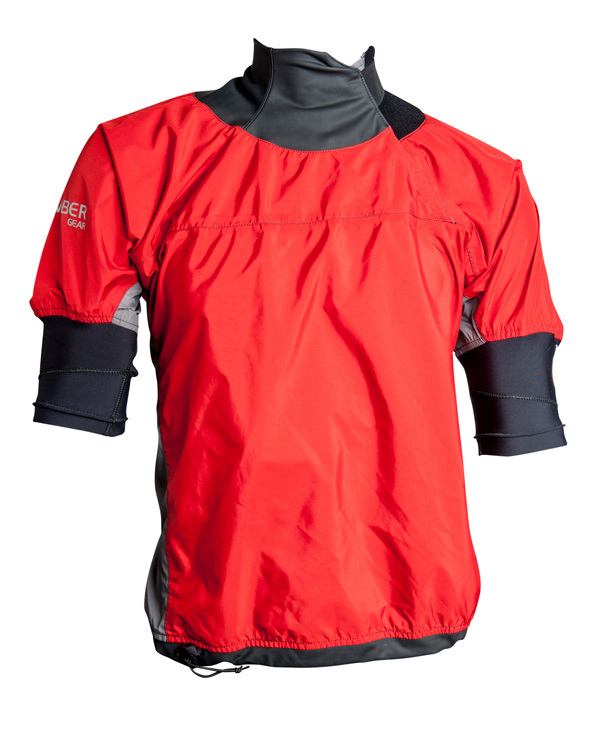 Bomber Gear Blitz Splash Top
On day four, a cold snap crapped on our hedonistic, sun-loving revelry, forcing us to don fleece and shells for the day’s float through Government Rapid. For that, we pulled out the new Blitz Splash Top from Bomber Gear, now owned by Confluence and founded by the late Rick Franken. Made from two-ply waterproof/breathable Bombtech, the Blitz’s tapered-for-paddling fit didn’t hinder our oar strokes or ability to awkwardly reach in the cooler for libations. It comes with a large neck opening with hook-and-loop closure, sleeve pocket, polyurethane-coated nylon waist with draw cord, and cone-shaped cuffs to thwart insidious water drops—more of an issue when paddling with a kayak paddle than with oars. Bottom line? Bomber for when a drytop is too much and rain jacket too little. $99 (long sleeve), $89 (short sleeve); bombergear.com

Creek Company Osprey Fishing SUP
While the section of the San Juan we were on isn’t known for its fishing—save noodling for massive catfish—we added this one to our flotilla largely because it’s made by our hometown company Creek Company. While us grown-ups were largely behind the oars, the kids gravitated to the inflatable Osprey Fishing SUP like flies to our groover, unleashing their inner Laird Hamilton. As many as five piled onto it at a time, though that quickly led to games of King of the SUP, with four getting knocked off. Designed to offer a better casting range and higher line of vision for casting to rises or tailing bonefish than float tubes and such, it also proved its worth as an uber-kid-friendly family vessel. At 11’2” long, 35 inches wide and six inches thick, it was stable enough for us to ferry a cooler over to another raft, and if you’re a fishermen, bring one along to sit on as you change flies. It comes with three fins for tracking, D-rings for gear, and Scotty mount pads for all angling accessories. Bonus: it rolls up for transport and storage. $1,500; creekcompany.com 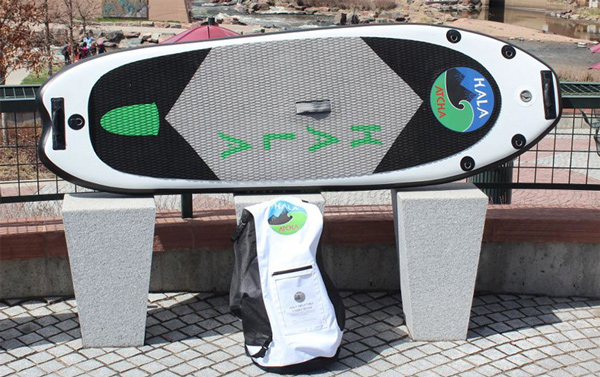 Hala River SUP
Another SUP we tested was the new Hala Atcha from Hala Gear, another inflatable paddleboard company out of Steamboat. First off, if you’re taking a river trip with kids, make paddleboards as much of a necessity as sleeping pads; you’re kids will be on and off them all day, keeping them out of your hair and off your raft. Designed specifically for river use (and surf), this baby measures 9′ feet long and 35″ wide at its beamiest point on the nose, and a whopping 6″ thick for stability. Widest at the nose, the board progressively narrows to a swallowtail, beneath which is a quad-fin set-up for tracking and control. Walk your feet back to stand on the stern stomp pad and you can spin it around in a wheelie, a trick two of the kids mastered. While sacrificing a bit of hull speed for tracking on the flats, the board’s shortness also makes it easier to control and turn, while equal rocker in the tip and tail lets you lift the nose to surf pocketed river waves, which we dabbled with on day two, spurring a round of brah-like beachspeak that night in camp. $1,250; halagear.com

Bluesmiths’ Spartan Board Short
After a winter wearing ski clothes, the best thing about the San Juan is the chance to wear shorts (and, by association, sunglasses to cut the glare from eggshell white legs). For that, we went with the Bluesmith Spartan, which was hardly Spartan on features. It’s made by SUP and paddling apparel maker John Smalley, who has spent years chasing world windsurf speed records. Smalley tests his gear daily in Maui, with his new line making waves as fast as its wearers are catching them. Wearing it daily, we found its Schoeller NanoSphere material, which repels water while retaining breathability, dried quicker than any other short on the river, even after swan-diving into a body-coating mud pit. You can’t wring them because there’s nothing to wring. The shorts come without any corrosive parts (i.e. no metal) or hook and loop closures that are magnets for sand. Fabric-finished with Coldblack, they also kept us cool when needed in the New Mexican sun thanks to their sun-reflective/UV protective treatment. And by day six, we could only wish our groover had their same odor-reducing, antimicrobial Active Silver treatment. $175; bluesmiths.com

Capabunga Bottle Cap
Okay, so do you don’t make a habit of bringing wine bottles on a river trip. But inevitably someone does and when that happens (or when someone “accidentally” drops a booze cap in the fire so you have to drink it all), there’s no better way to re-seal it than with the Capabunga. Invented by wine makers Walt Averill and Máire Murphy who were tired of stuffing corks back into bottles, the gizmo is a reusable wine bottle cap made from food-grade silicone. When placed on, it lets bottles tumble around upside down in the drybox with nary a spillage. Plus, it will also work for everything from plastic bottles of Crisco to Clorox if you ever lose their caps We also liked the catchy phrases printed on top like “In Case of Emergency Remove Cap,” “Girls Night In,” and “In Case of In-laws Remove Cap.” And in a pinch, it might work to cover up a leaky raft valve. $7.95 (2-packs); capabunga.com

Freewaters’ Scamp Flip-flop
What’s a river trip without a pair of flip-flops? To keep our feet flopping, we went with the new Scamp from Freewaters, which we felt especially at home in when unloading our sleeping pads every night. Why? Their schtick is that they sport Therm-a-Rest cushions on the footbeds, just like the ground pads you sleep on. Complete with Therm-a-Rest’s telltale ridges, the foam pattern offered grip so our feet didn’t slip off the pads, flexibility for schmearing onto rocks when you jump off the raft with the bowline, and best yet, air circulation – an added bonus in the cook-a-goose heat of the San Juan’s Goosenecks. Combine that with reinforced webbing toe straps and full arch support matching those of arches in the surrounding sandstone and our feet didn’t want to leave them. Bonus: a portion of proceeds benefit clean water projects around the world. $36; freewaters.com 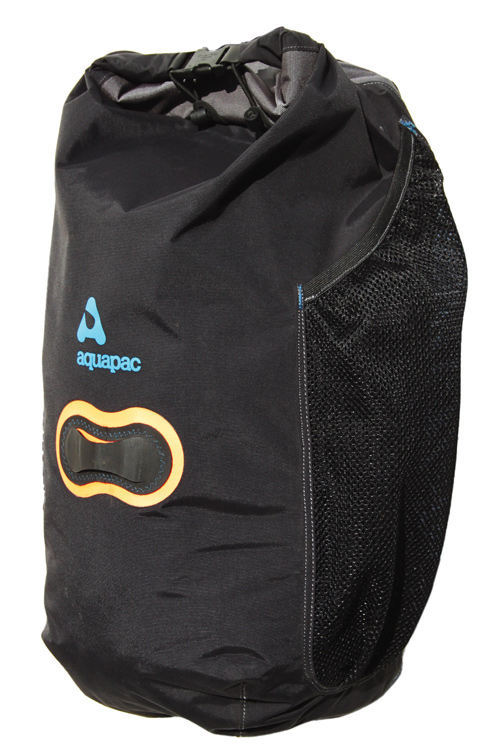 Aquapac’s Dry Storage
The San Juan might not have the rapids of the Grand, but you still need drybags. Enter a new line of water-keeper-outers from Aquapac, including the 2-, 4-, 8-, and 13-liter Drysack; 40L/70L Upano Waterproof Duffel, and 25L Wet & Dry backpack. The 40L Duffel worked perfectly for one of our most prized possessions: toilet paper (which, with eight along, we needed plenty of). Simply roll down the top closure and fasten the Velcro strip and Fastex buckles. The only knock against it and the larger 70L was that you lose a little space rolling the closure up enough to reach the Velcro fastener. The 25L Wet & Dry Backpack also proved a hit, especially on the hike up to the swimming hole at John’s Canyon. Made from a tough TPU nylon outer, with waterproof, taped seams, it handled all the abrasive scrapes we could dish out while slithering up a crack to get to the traverse to the pool. It fit six beach towels for shivering children afterward, as well as a few brews for the escorting parents. Mesh side pockets fit water bottles and a camera, while an interior, lightweight roll-down dry storage sack inside (combined with the outer material’s roll-down closure) let us separate wet stuff from the dry, and kept everything as dry as the ram bone the kids found in an alcove. The only knock: the hip belt was a bit hard to fasten. Move the receiver buckle more to the middle, will ya? $95; aquapac.net 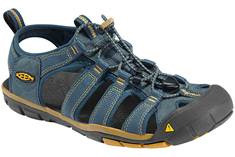 KEEN’s CNX Sandals
We saw two toe injuries on our trip—one to Tom clobbering an ammo can at the put-in, and another to my wife hiking down Slickhorn Gulch—and both victims were wearing normal, toe-protruding sandals. No one wearing KEEN’s new CNX sandals, with their protective toe covers, stubbed their toes at all, myself and run-before-you-look kids included. We brought two models along—the Youth Seacamp CNX and the adult Clearwater CNX—both of which covered our piggies with aplomb and, almost as importantly, stayed on in the muck-sucking depths of the mud hole at Oljeto Wash. They come with a washable polyester webbing upper, Aegis microbe shield hydrophobic mesh lining, a lace capture system with 2mm bungee lace, and razor siping for traction, well needed for the scramble up the swimming hole ledge at Slickhorn Gulch. $55/$100; keen.com.

Adventure Technology Paddlewan
Designed specifically for kids, the Paddlewan from Adventure Technology was a hit for kids taking to the IK and even SUPs, thanks to a light weight (28 oz.), small diameter shaft that fit perfectly in their palms. The paddle comes with a 0° to 45° ferrule adjustment for feathering the smaller, kid-sized blades (425 sq. cm), which are made from the same lightweight fiberglass reinforced nylon material as its Search Glass paddle. Like our coffee (five handfuls of grounds per pot), the shaft was the perfect consistency—not too stiff, while still providing ample power to get up to speed. It’s available in lengths of 185, 195 and 205 cm. $90; adventuretechnology.com 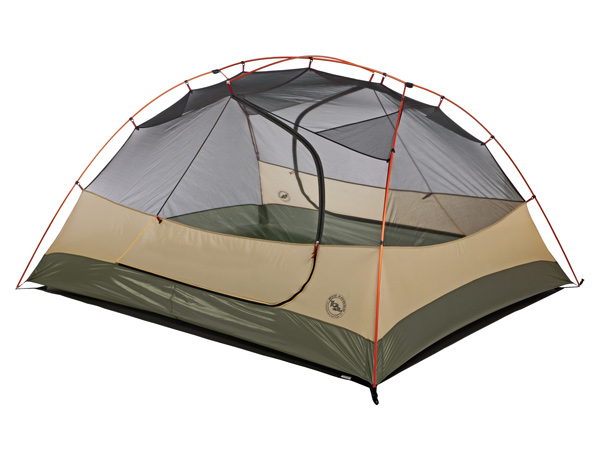 Big Agnes Jack Rabbit SL4
The new Jack Rabbit SL4 is designed as a lightweight (6 lb., 2 oz) backpacking tent. So what? It also worked great on a weight-be-dammed river trip, where you need all the help you can get fitting things into drybags every morning. Thanks to DAC aluminum poles with press fit connectors and plastic clips that fasten to the tent body, the easy set-up allowed three 10-year-old girls to build it up and break it down after only getting grown-up help once. While we didn’t get any rain (it’s the desert, go figure), the kids got a better night sleep than anyone when a gale blew though camp on night three. While us parents were tossing and turning in tent-flapping insomnia, they slept through the whole thing. It comes with a 57-square-foot floor area and 13.5-square-foot vestibule, which fit drybags, lifejackets and more. Perhaps best testament came from my daughter Casey afterward. “Dad, can we keep this? I love it.” $500; bigagnes.com

Duraflame Campfire Roasting Logs
You’ll always get a one-match fire if you pack these along, which fit inside rocket boxes perfectly. The first fire log specifically formulated for roasting and cooking, they’re made from 100 percent renewable resources, including real wood charcoal, and are a USDA-certified bio-based product, meaning no worries for cooking hot dogs and s’mores. Available in a four-piece bundle (5 lb.) or a case of six bundles, they offer instant flame in a pinch—like, say, when you accidentally roll into camp at near dark due to that impromptu, late afternoon soccer game on the beach that your wife told you shouldn’t stop for. Simply throw one of them in the firepan, set up the kid chairs and tell them to keep busy while you prepare dinner. Top it with headlamp-found driftwood afterward and bingo!, you’re ready for Kumbayah. Bonus: they cut down on the ashes you have to pack out afterward. $6 (4-log bundle)/ $30 (6-bundle case), duraflame.com