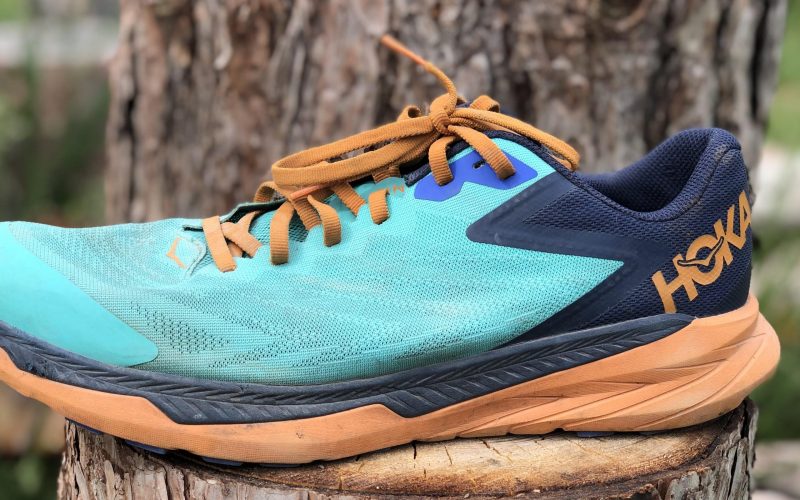 Great versatility as a door to trail shoe. Seamless upper without overlays is comfortable right out of the boxMegagrip outsole inspires confidence

Fit is a bit long I was not able to lock down my heel, which was noticeable on uphills. No heel loop for putting on shoe.

The Zinal is a new offering from Hoka One One that appears to have been named in honor of the "New York City Marathon" of trail racing, the famed Sierre-Zinal, a 31 KM race in the Alps. With this in mind, its obvious this is a racing shoe meant for moving fast on a variety of terrain. Its slimmed down compared to other Hoka shoes, with a sleek seamless upper, minimal lugs, and a firmer midsole. I would recommend this shoe for distances from 1/2 marathong to 50Km.  It fits a bit long, so for racing, I would consider sizing down 1/2 size.

The last is similar to the Torrent, its roomy enough to be comfortable, but by no means wide. The length is a bit long, I would love to try a 1/2 size smaller. I did have some issues catching my toe on a few runs and actually fell down more than once.  I had trouble locking down the heel, even when changing the laces a few times. I kept having some verticle oscilation when running up hill, but just a tiny bit. The shoe laces are slightly elastic which makes for an accomdating pressure on the dorsal aspect of the foot that never felt painful. The midfoot is locked down really well with combination of numerous lace islets and contoured arch.

The midsole is dual density foam. The majority is on the firmer side, which helps with speed, but isn't very responsive, and requires some break in time. Its moderately protective due to the firmness. The other density is much softer, located in the medial and lateral midfoot area broviding some cushion and some lateral stabiltiy. Overall the ride is nice and fast, yet is also very stable due to the width of the midsole.  The ride is versatile , very servicable on road and gravel, as well as trail of course.

The outsole is minimal, with Megagrip rubber in the forefoot and heel only, with exposed midsole elsewhere. The lugs are uniformly spaced, low height, and not very aggressive;however, the traction is very strong on trail and minimal enough to feel uncombersome on road. The low slung lugs allow for fast running. The proction underfoot is moderate, mostly due to the depth and density of the midsole. The upper proction is minimal with only a slight TPU toe bumper.  The width of the outsole is wide, similar to other Hoka shoes, which creates great stability when running fast on uneven terrain.