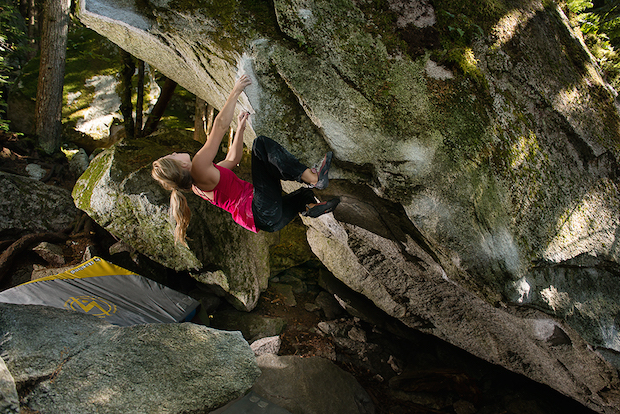 A regular on the British Bouldering Team and World Cup circuit, Mina Leslie-Wujastyk has traveled the world conquering routes such as Misericorde (7C+) in Fontainebleau, France, and Leopard Cave (8A+) in Rocklands, South Africa. Now, she’s turning her focus to sport climbing in the U.K. “Around here, climbs are 30 meters max, all single-pitch stuff, yet they’re quite hard,” says Leslie-Wujastyk. She’ll hone her skills at home, but when she travels to southern India and back to South Africa later this year performance won’t be her sole goal. Says Leslie-Wujastyk, “Travel is also about new cultures, and seeing new places.”

Who introduced you to climbing?
My family spent a year in India, and my school there had an outdoor climbing frame. I loved it, and when we returned to our home outside London, I would climb up the bannisters and the doorframes. My parents figured they’d better find a way to harness that energy (no pun intended!) so, because they weren’t climbers, they went looking around to see if climbing was a thing. They found an indoor climbing wall, and tried to put me and my sister into classes there.

Adults could do one-on-one lessons with instructors, but for kids, the only way in was through the Boy Scouts. Obviously that wasn’t going to work for me, because I’m not a boy. My mum got a bit annoyed, and must’ve talked to somebody about it, because suddenly they said okay, and I started climbing with my sister and my dad. It was kind of a family thing.

So did you climb with other kids? Other girls?
A lot of kids went in and out of climbing, in and out of keenness for it. My sister dropped out after a year. So I tended to climb with people that were older than me. If anything, the age gap felt like a bigger difference than gender. I just ended up making good friends with men. That’s a nice lesson to be taught as a girl, that you can have functional relationships with boys. 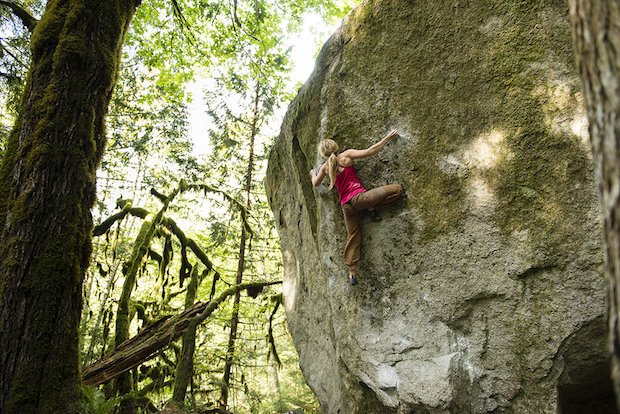 Why aren’t more girls climbing, do you think?
Sometimes sports like climbing can be portrayed as manly, or requiring power and strength. Women can be intimidated by skills they perceive they need. They assume they won’t be good, and maybe they’re put off by the idea of getting scruffy. Maybe they assume they won’t be attractive.

There is a small stigma about how climbing changes your body, your upper body especially. It becomes more muscular. We’re all conditioned by the media to need to look pretty in XYZ way. But these things are changing. Women are, more and more, being presented as attractive, even if they’re sweaty. Still, it’s very much a new thing.

What do you think about the new images of women in the outdoors?
Some stuff is really great. The more we see such images, the more people say, “Maybe I can do that!” The more we see strong, athletic women, rather than very skinny women—that’s a positive thing. Sometimes, though, it gets portrayed as: “Go climb, or go hike, because then you will look good.” Not, “because you’ll have fun.” Maybe I read a bit too much into it, but I think there’s a subtle change that needs to happen. Are we sending the right message? We’re fishing for more women to participate, but are we hooking them with the right bait?

I really don’t want beauty to be what’s bringing women into outdoor sports. Women want to be celebrated for our skills, not because we look good in a sports bra. I want coverage to be about how I climbed something impressive, or have something to say.

What advice do you have for women who may not see a lot of other gals in the sport they’re drawn to?
If you don’t see women in it, assume that’s a temporary thing. And also, guys make brilliant friends. Having said that, the more women that get into it, the more will follow. So bite the bullet and do it if you want to do it. Someone has to start, and it might as well be you.