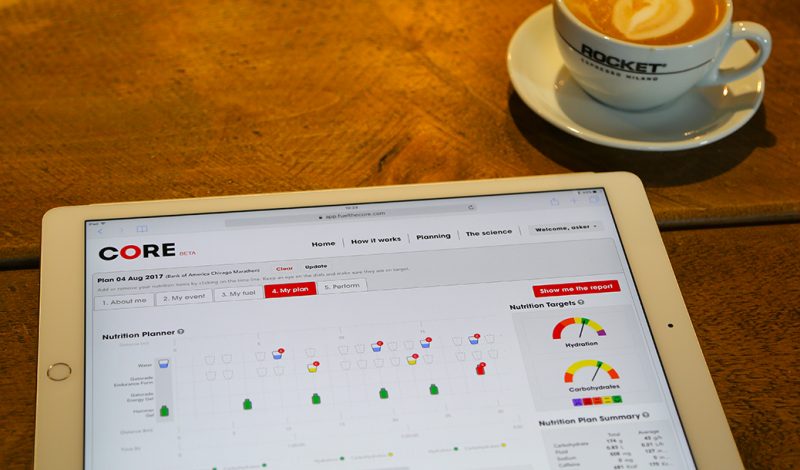 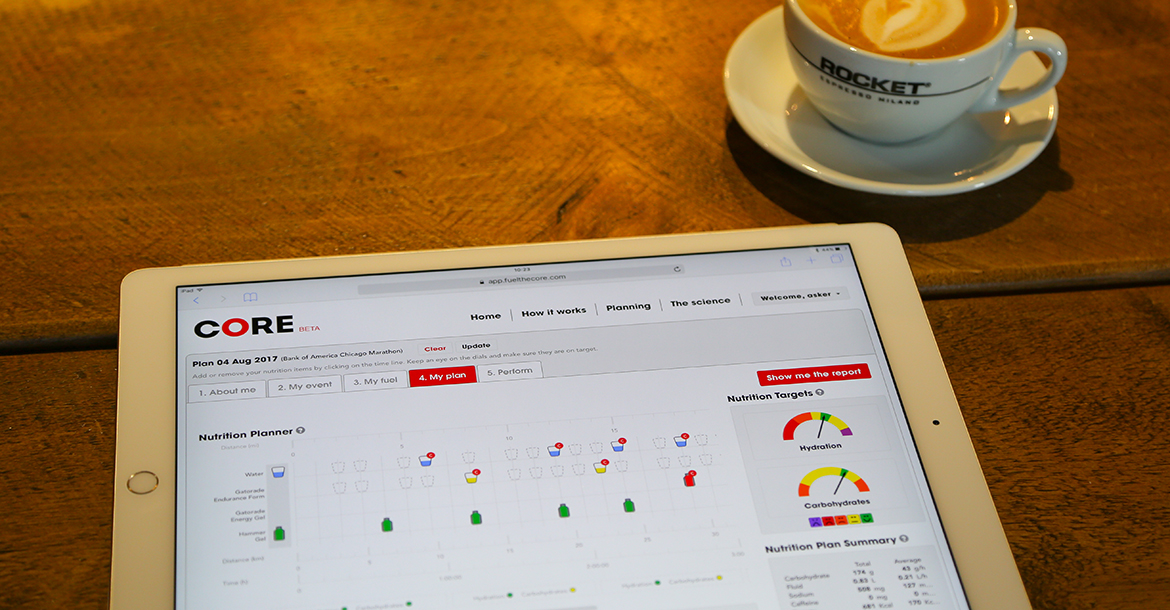 For most runners, finding the optimal fueling strategy during a marathon or ultra involves sifting through random articles on the Internet followed by a process of trial and error typically ending in either GI issues or hitting the wall. A new web-based application, Fuel The Core, eliminates the guesswork from dialing in your optimal race-day and mid-run nutritional needs. Designed by famed sports nutritionist and Ironman athlete Asker Jeukendrup and runner Bill Braun, Fuel The Core provides athletes with evidence-based fueling and hydration recommendations starting just before and during endurance events such as running, cycling and triathlons.

“The problem is that in the world of sports nutrition there are so many opinions. One of the most challenging things when determining nutritional requirements during exercise is distinguishing between opinion and evidence-based,” said Jeukendrup, who helped design Fuel The Core to solve that issue. Jeukendrup developed the idea for the app when working with such athletes as 27-time world record holder, Haile Gebrselassie and four-time Ironman World Champion and world record holder, Chrissie Wellington. He found that since he was always asking for the same data when working one-on-one with endurance athletes it was possible to automate that process and bring personalized evidence-based fueling to the masses and Fuel The Core was born.

The app is straightforward and walks users through each step. Athletes first must decide whether they want to develop a fueling and hydration plan for training or a race. Jeukendrup notes there is a difference between fueling for training versus racing. During races, athletes are typically dealing with more nerves, which can reduce blood flow to your gastrointestinal tract, reducing your body’s ability to absorb carbohydrates.

For those using the app for race planning, Fuel The Core has over 100 events preloaded; such as the NYC, Boston and Chicago Marathons. The app knows key data from each event a factors details like the location of aid stations and the type of on-course fueling offered into the results. 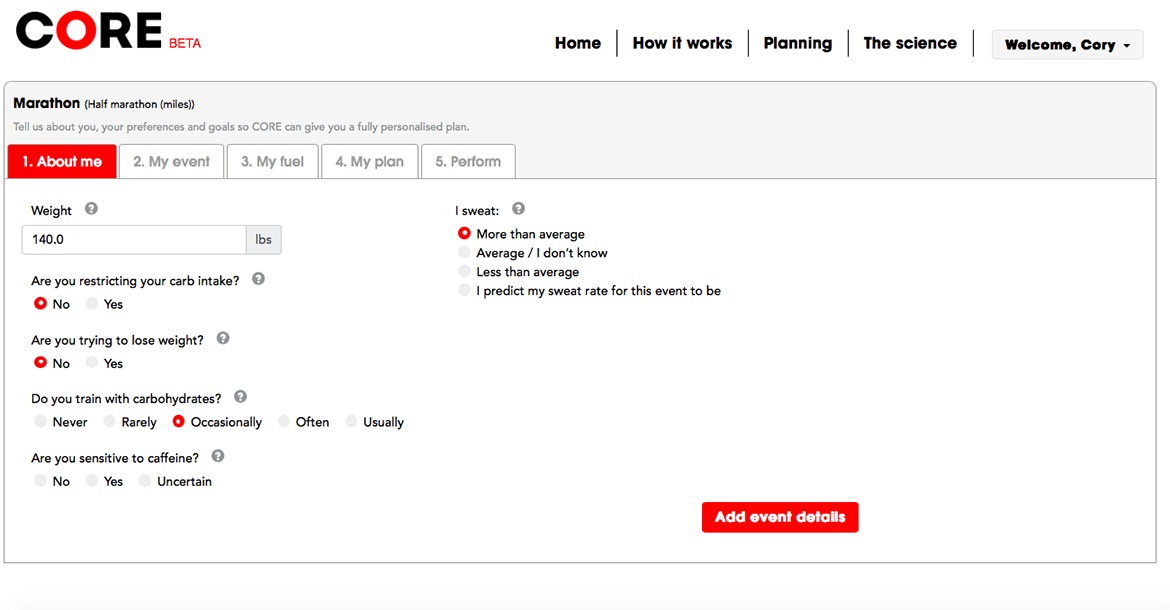 Once the user selects a preloaded or custom race distance, the app asks for key data such as weight, personal carbohydrate intake, carbohydrate usage during training runs, and degree of sweat. Jeukendrup added that it is vital to obtain information surrounding carbohydrate intake. Those who limit carbohydrates on a daily basis will have a lower absorption rate than those who don’t due to a reduction in key enzymes needed to break down the carbohydrates into usable energy. 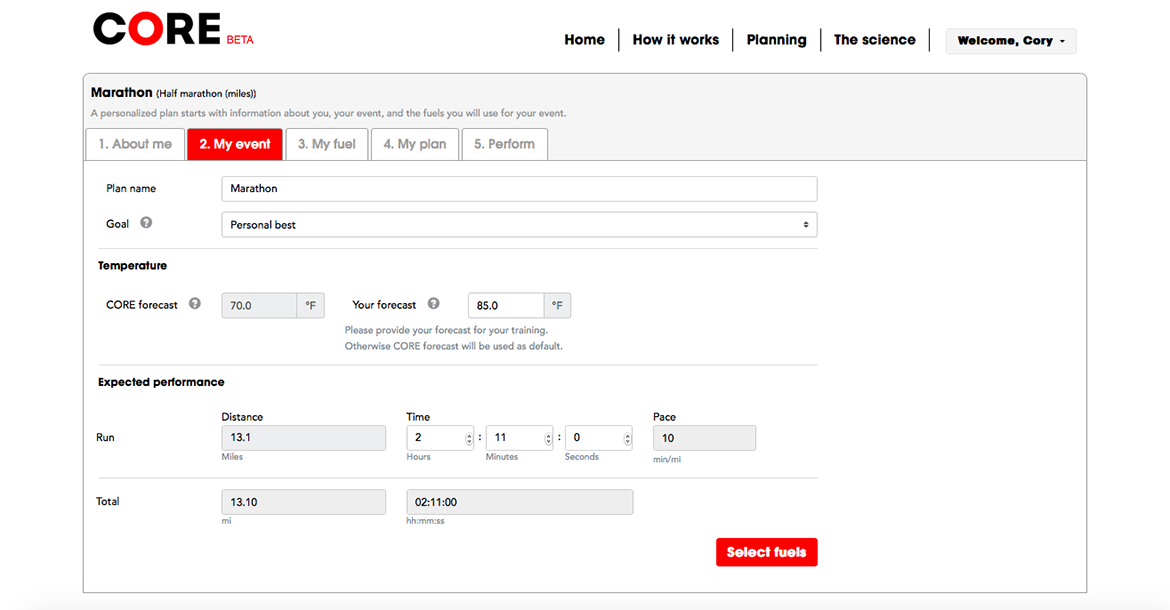 After the input of key information, the app compiles information about the athlete’s event. Data such as time goals, race goals and whether there is a need to avoid GI issues is essential. Other key figures that factor into the output are race-day temperature and predicted finish time. 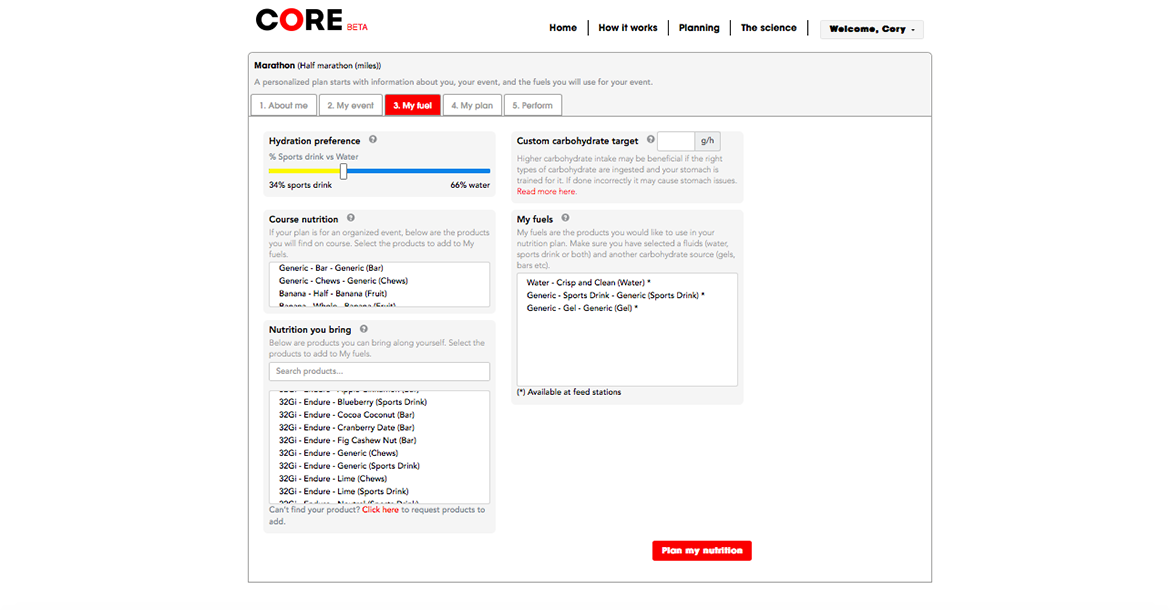 Next, the user chooses hydration and fueling preferences. Fuel The Core has hundreds of preloaded fueling options from all the major companies and even unconventional ultra favorites such as bacon, potatoes and sandwiches. Each preloaded fuel calculates the nutritional content automatically, so there’s no need to know that data when building out a plan. 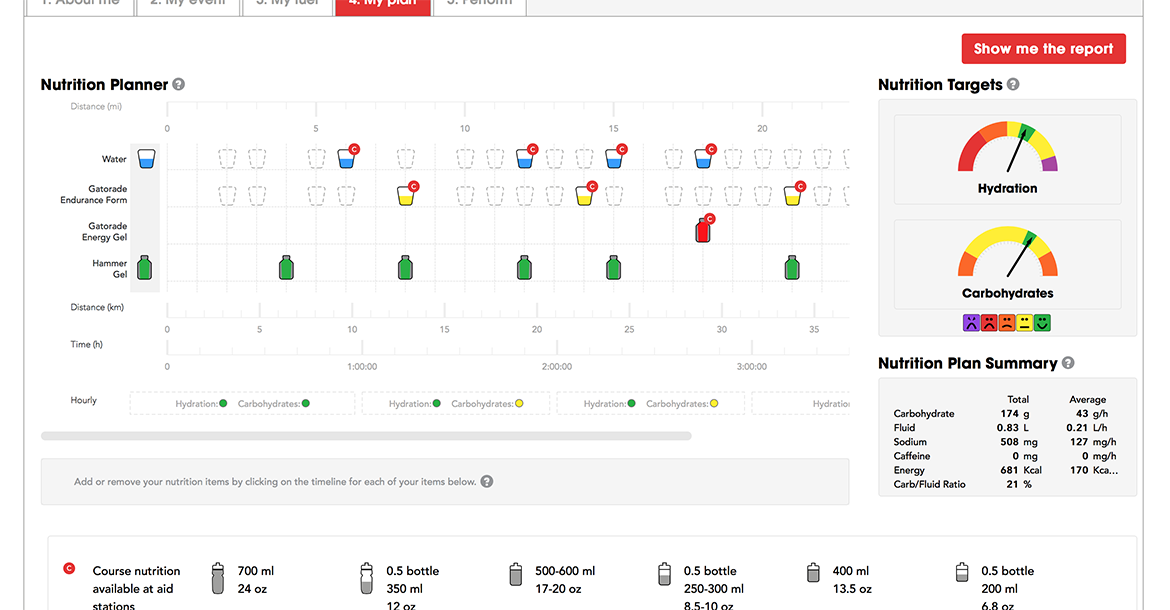 Once the athlete chooses fueling options, Fuel The Core calculates a personal fueling plan and displays a visual representation of how much and when to fuel and hydrate through the event. Additional adjustments can be made by adding or removing a fuel or drink while a color-coded gauge on the screen indicates if the plan remains within the ideal range. The final output is a detailed screen showing a Fuelscore, which indicates how well the plan matches against evidence-based recommendations. 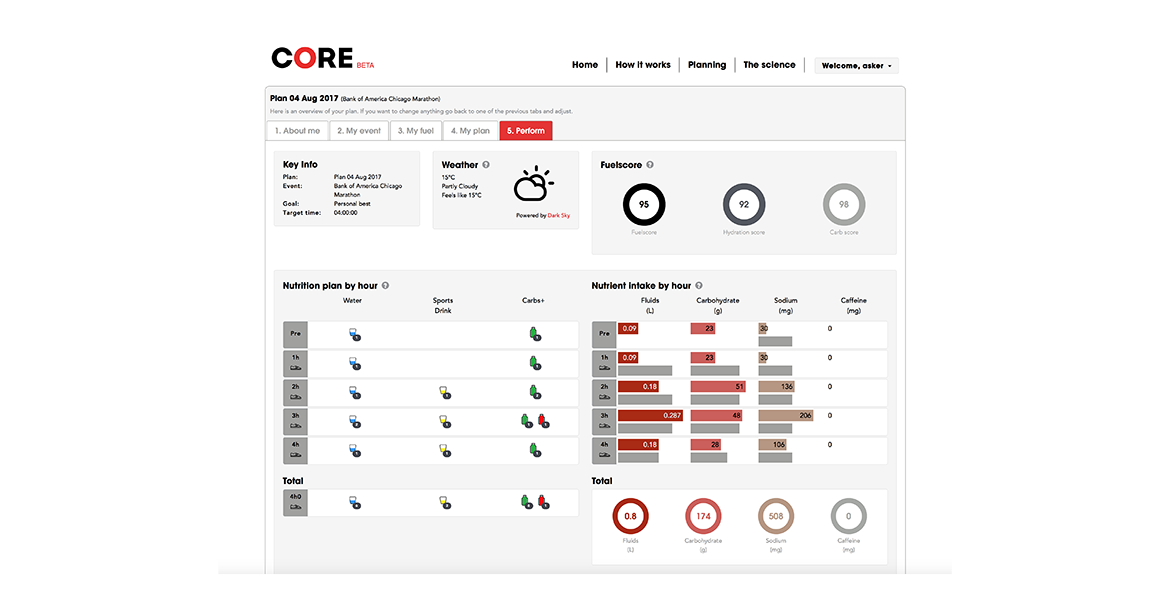 Jeukendrup advises athletes to start working towards a race-fueling goal at least 10 weeks out from the goal event, aiming to exceed the total recommended intake just before the race. He explains that taking in more fuel in training compared to race day has to do with lower absorption rates during stressful events such as races. Instead of carbohydrates absorbing through the gut, they may sit in the stomach and cause GI upset. By training with more carbohydrates than recommended for the event, the athlete is “training your gut,” as Jeukendrup puts it, to be able to handle the lower absorption rate.

The app’s currenty beta status will be removed soon, Jeukendrup said. “You can be confident it’s a good plan for you,” he said. “You’re not going to run into preventable problems you see so many athletes making. You shouldn’t expect many stomach problems and as long as you can hold down food, you’re not going to run out of fuel. It gives you a solid plan.”

Fuel the Core already has a few thousand users and comes in three editions, a free version, pay per plan for $12 and yearly-unlimited edition for $99. You can get a 25% discount by using the coupon code Fuel17.