Meet the Lab Behind our Running Shoe Tests 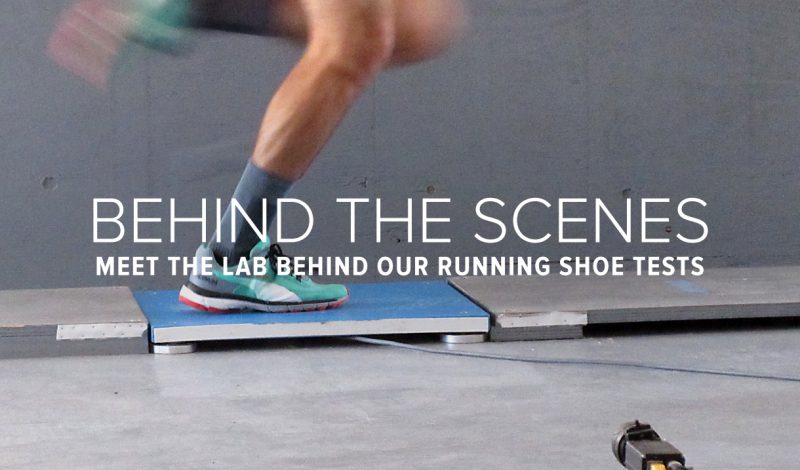 At the Gear Institute, we believe runners deserve a credible, objective resource to help them find the best running shoes for them. That’s why we’ve partnered with Heeluxe, an independent shoe testing laboratory based in Santa Barbara, California, to help us conduct the most objectively fair and informative running shoe test that we can.

We picked Heeluxe because they have a uniquely realistic method of testing. The company does not just conduct a fleet of static laboratory tests on each shoe. They collect data directly from athletes’ feet, with tests designed to minimc runner’s experience of a shoe while they are using it.

“We try to create tests that recreate how runners use the shoes in the real world rather than what would be convenient in a lab setting,” says company president Geoffrey Gray. “A lot of shoe companies don’t understand how their product actually performs on a person’s foot. What Heeluxe wanted to do is create an innovative testing lab where we do on-body testing, so we can indentify what shoe companies are doing well, and what they’re doing poorly.”

Starting with our 2014 Road Running shoe test, Heeluxe will be providing the objective laboratory data that will compliment the wear testing feedback our in-house team of seasoned runners delivers. 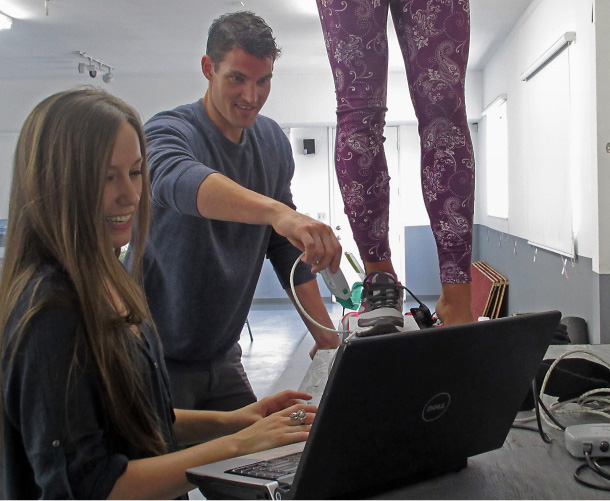 Heeluxe has developed an insightful way of measuring heel drop (the difference in height between the shoe’s heel and the forefoot). Rather than simply measuring the height of the heel and the height of the forefoot, Heeluxe measures both while the shoe is under the weight of a runner. Heeluxe calls this weighted heel drop measurement “Real Drop,” and it says a lot about how a shoe will actually feel underfoot.

Using a special device that slips inside the shoe, Heeluxe measures the height of the shoe’s heel and forefoot under the static weight of a 170-pound male tester and a 120-pound female tester. This tells you the heel drop that your foot actually feels when you are standing in the shoe, which is more important than what the heel drop is for a shoe on the running store shelf.

Here’s why that matters. In testing performed for the Gear Institute, Heeluxe has found that the weighted ramp angle has often been up to four millimeters different than that of the unweighted shoe—meaning a 6mm drop shoe can turn into a 2mm drop shoe. This is a significant change, especially because it pushes some shoes into rather unsettling negative heel drop territory, meaning the shoe actually slopes backwards under the weight of a runner. 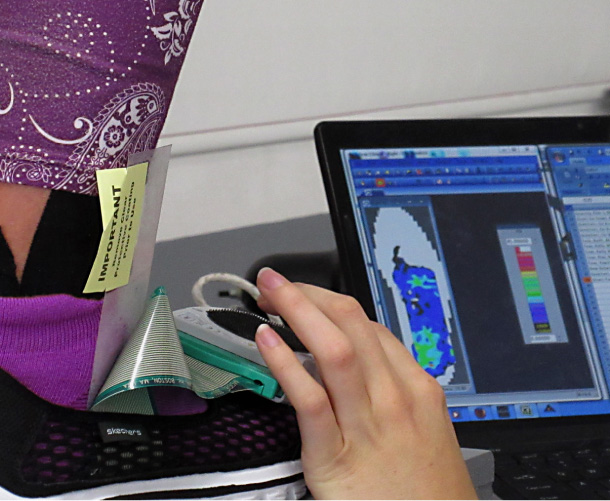 To collect data on data on how firm or soft a running shoe’s cushioning is, Heeluxe uses special inserts to detect high pressure zones in the shoe. The insoles measure pressure along the entire foot in exactly the way a runner experiences them upon impact, and can be used to measure how cushioning changes over time and over mileage in particular parts of the shoe.

In these pressure map images, red zones represent high-pressure areas and blue zones are low pressure. We use this data to compare the cushioning of different running shoes objectively against each other. Heeluxe analyzes the shoes once when they are fresh out of the box as well as after 150-miles of running. This helps us detect how much a shoe’s midsole has collapsed over about half the life of a shoe, which indicates objectively how quickly a shoe is breaking down. 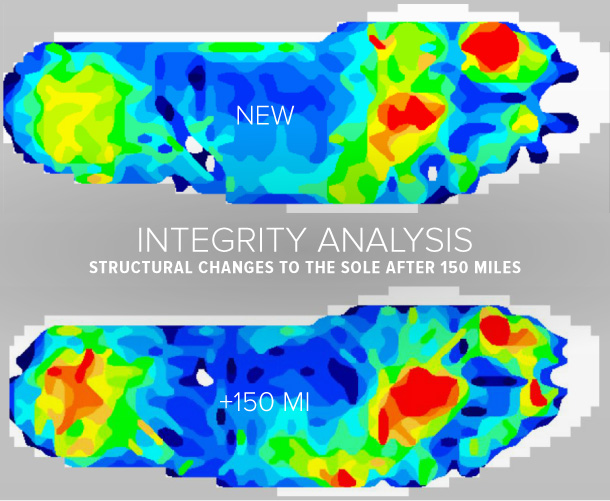 Heeluxe employs a team of experienced runners Santa Barbara to run in each running shoe sample for exactly 150 miles (about half the dependable life of an average shoe), and then bring the shoe back to the lab for follow up testing. Not only can Heeluxe’s technicians study the wear of the shoe’s outsole, they can also re-run certain tests to see how the shoe has broken down over that mileage.

For example, by re-running Heeluxe’s weighted Real Drop test, the lab can study how much a midsole has collapsed in 150-miles, and how that has affected the shoe’s ramp angle. (In one recent test, a shoe collapsed so badly, its heel drop fell a full eight millimeters, ending up at a disturbing -5mm heel drop. 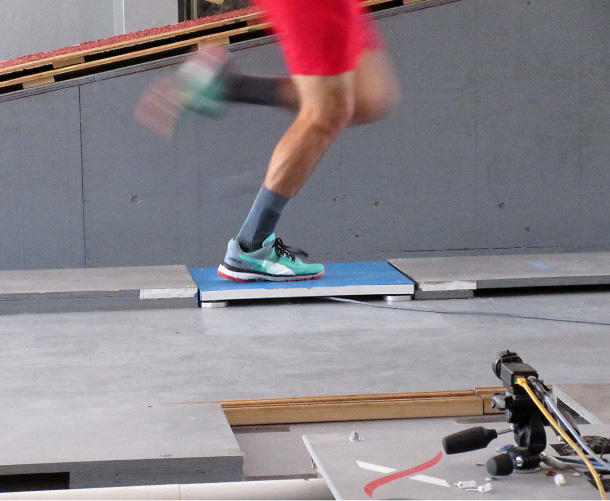 Heeluxe uses something called a Kistler Force Plate to capture what happens when a running shoe hits the ground. Regarded as the most accurate, three-dimensional force plate for this kind of testing, the device captures the downward vertical forces and sheer forces (front to back and side to side) of a runner’s touchdown and toe-off. This allows Heeluxe to measure impact, braking, and acceleration forces in every stride. The best running shoes have the least deceleration and most acceleration forces, while minimizing lateral forces creates a more stabile and efficient ride. 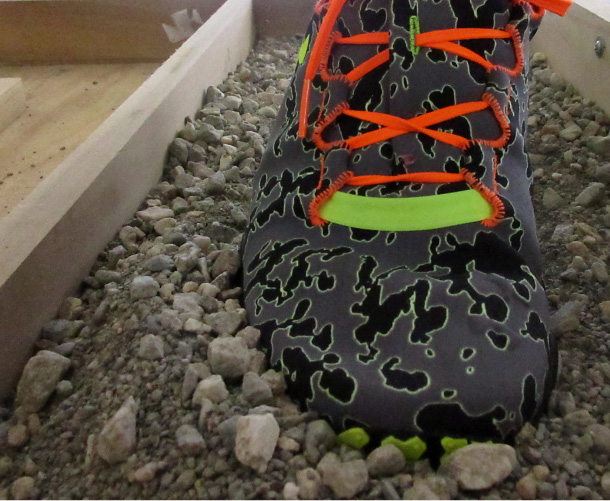 In testing the traction of trail running shoes, Heeluxe does an impressive job of emulating the real conditions a runner will encounter. Unlike most traction testing, the company measures traction on realistic surfaces like mud, gravel, wet tile (meant to emulate slick rock), and grass. And they use runners, not robots. Runners pass over the traction surface over and over and the results are averaged to determine the different effect outsole rubbers and lug patterns have on various surfaces. While Heeluxe has to work harder to mitigate the many variables in this kind of testing, the aggregated results are more reflective of the kind of “real world” traction a shoe will deliver on the trail.

Heeluxe can measure how efficient a running shoe is by studying how hard a runner is working as he or she runs in different shoes.

The company has each runner maintain a specified pace and incline on a treadmill while technicians monitor heart rate and the lactic acid levels in the athlete’s blood. That tells them how hard the athlete is working to maintain his or her pace in a given pair of shoes.