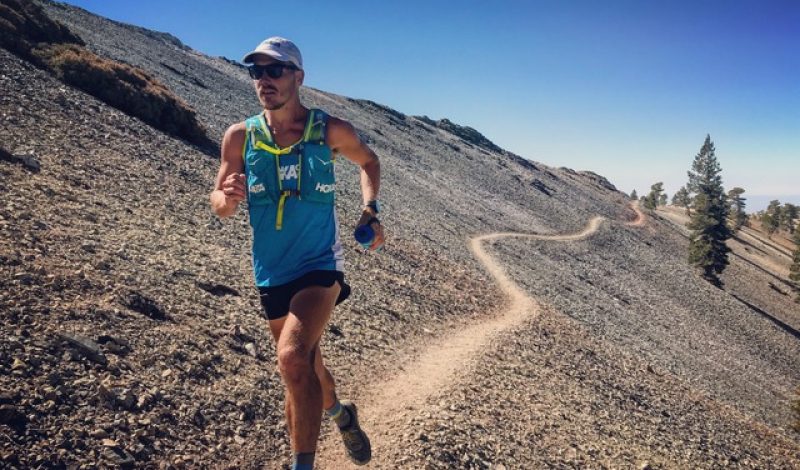 It’s the nature of the sport. Ultra-runners need to minimize the weight of any gear they use. But trail running pro Kris Brown takes weight-saving to new levels.

“I try to go as minimal as possible,” the 31-year old Santa Barbara runner says. For Brown, that means essentially gear-free. Whenever possible, he shuns packs and even belt pouches in most situations. Whether racing or training, Brown prefers to simply load gel packets into the pockets of a slim pair of running shorts, and hand-carry waterbottles to avoid any kind of extra weight.

“I don’t carry any food on the trail. I stick with gel packets – GU Energy specifically – and I prefer to carry only what fits in my pockets. If the trail is too long between aid or resupply stations, I’ll wear a belt with added pockets to carry extra gels.”

For that belt, he opts for a Nathan Sports belt, usually the Lightspeed Pak Belt. Hoka One One, Brown’s sponsor, and Nathan collaborated on designing a number of running accessories and this Nathan belt work well with Brown’s ultra-minimalist philosophy. It features a simple pocket for essentials, shock-cord ‘holsters’ to secure gel packets for easy access, and clip attachments for racing numbers.

The choice to fuel up solely with gels keeps Brown’s trail weight down, and hasn’t impacted his performance, he says. “Use of gels is pretty common, but I think I’m a little toward the extreme in using only gels during runs. Gels and electrolyte drinks. During a single-day race, I pretty much function on sugar and water.”

For hydration, Brown foregoes reservoirs and tubes, opting instead for the simplicity of hand-held bottles. “I just feel more natural running without anything on my back – I shun backpacks whenever possible, even when hiking.” He says he doesn’t think there is any real competitive advantage in using handhelds rather than a reservoir system, “but it just feels better – more natural – to me.”

When pressed on his gear selections, Brown admitted to carrying one bit of extra gear: emergency provisions. But for Brown, emergency provisions means one extra gel packet.  “On long runs, I always have a gel I’m not planning to use. I keep it in a pocket by itself to make sure I know that specific packet is a reserve. I won’t use it unless it’s an emergency. It’s functional as an emergency back-up and it’s a nice security blanket to keep in mind.”

Brown even trims weight in his choice of running apparel. He again references his history in track running, noting he favors a simple fast-drying singlet top and slim shorts. “I dress like I’m at a track meet, I guess.” But for Brown these days, the track is 100 miles long.

Brown’s shoes as the centerpiece of gear in his running kit. “Hoka’s Evo Speedgoat is my favorite shoe. It is lightweight and breathable, with a supportive upper. It provides support and protection with good speed,” he said.  The Evo Speedgoat is a predecessor to the new Speedgoat 4, which Brown says holds true to the fundamentals of the Speedgoat line, “while providing a bit more natural feel underfoot.”

When hitting the road instead of trails, Brown favors the Hoka Carbon X. “As someone with a background in road and track, I still sometimes like to go fast. The carbon fiber plate makes it a bit stiffer and reactive, and it’s just fun to run fast in that shoe.”

Brown started running early in life. He competed in club cross-country events as early as age 10  and excelled as a track athlete at Garfield High in Seattle. In college, he mostly stuck to 5K and 10K events, but always had an eye on longer distances. Ultra was the ultimate goal.

Brown competed in a couple events in 2016 and 2017, including a 95 miler on Scotland’s West Highland Way. He earned a 4th place finish in the 2017 The North Face / Gore-Tex 50-mile Endurance Challenge before competing in the 2018 Western States 100. Brown finished 10th in his debut in this classic.

“I was 13th in 2019 – the competition really picked up,” he said, though he plans to regain his top-10 standing, in part by pushing his minimalist approach.

Looking forward, Brown plans to compete in the 100-mile Tarawera Ultramarathon, New Zealand’s most prestigious trail ultra in February 2020. He’ll follow that up with the Georgia Death Race in March – a 74-miler that features upwards of 28,000 feel of elevation change terminating at Amicalola Falls State Park. The Georgia Death Race is a qualifier event for the Western States 100.

If you want to spot him out there, just look for the guy who’s not carrying anything.