How to Buy a Heat-Exchanger Stove (Wisely) 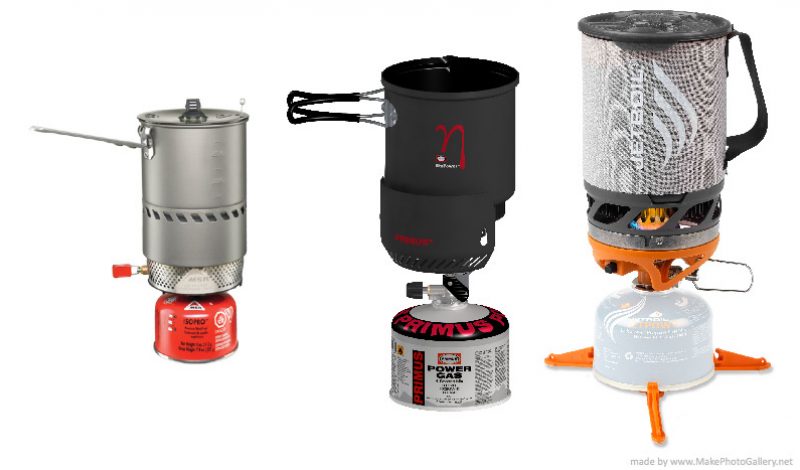 What is a system stove?
System stoves are those that come with an included, compact pot with heat exchangers at its base. The system is designed to nest very efficiently, so they take up less space than stoves where the burner and pot are purchased independently. Some system stoves cannot be used with any other pot except the one that came with it (MSR Reactor), while others are compatible with multiple pots (Jetboil, Primus Eta) with varying degrees of effectiveness.

System stoves are faster and more efficient
A system stove featuring a pot with heat exchangers (those fins on the underside of the pot to increase it’s surface area) is significantly more efficient than a stove used with any old pot.

Here’s an illustration. For our Fall 2012 stove test, we tested three system stoves with heat exchangers—the Jetboil SOL TI, MSR Reactor and Primus EtaExpress. Using a single 4 oz canister of fuel, these boiled 12, 9, and 9 liters of water, respectively, in about 3 minutes.

Boil times are overrated
Boiling water is the most important task a stove does. But a lot of stove tests make the mistake of focusing exclusively on how fast these stoves boil, or how many BTUs they pump out. But a great deal more goes into a good stove than how many seconds it takes to boil one liter in warm conditions.

All system stoves boil water rapidly—around 3 minutes. In our tests, the fastest and slowest ones show a difference of just 27 seconds. In the context of cooking around camp, that’s nearly negligible. Even if you purchase the slowest boiling stove out there (Primus’s EtaExpress), we doubt you’ll notice the difference sitting around camp.

It’s much more important to know how efficient the stove is while boiling that water. A stove that dumps a torrent of fuel in order to save 15 seconds on a boil is a stove that will just require you to tote more fuel into the backcountry — a waste of the space-saving efficiency the stove is designed to achieve. (For example, the MSR reactor, which boils water in 2:53, only boiled nine liters of water on 4 oz. of fuel, while the Jetboil SOL Ti, which boiled in 3:08, boiled 12 liters on the same amount of fuel).

Also, boil times are erratic. They are dependent on the amount and temperature of the water, fuel type, canister pressure and environmental factors, with wind speed being the most critical. So unless you’re camping in a laboratory or the Bio Dome, expect your stopwatch to read differently with just about every boil.

It’s more important that a stove allow for consistent boil times over the life of the canister. This means choosing a stove with a pressure regulator. Here’s why: internal canister pressure drops as fuel volume decreases. When a canister is new, and at room temperature, a typical can of fuel has around 65 psi of pressure inside. By the time the can is down to its last drops, the pressure can fall to around 10 psi.

Since the pressure drops with every liter boiled, so will your time to boil. A regulator keeps the pressure consistent as fuel volume decreases, so you maintain consistent performance until the last boil or two.

Ignore BTUs
When it comes to BTUs, big numbers are cool but sustained performance is better.

BTUs (British Thermal Units) are a measure of how much fuel is being passed through the jet, not how well the stove transfers heat to the pot. It’s efficiency that matters, the amount of heat you can get from each gas canister.

If it were all about power, engineers would install larger jets. But larger jets equate to things melting and an increase in output of poisonous carbon monoxide—meaning it becomes harder to cheat by cooking in your vestibule when the weather goes to hell.

It’s all about efficiency
Efficiency is a stove’s ability to convert as much of the fuel into heat as possible. Convection from the hot exhaust gases are as critical to this as direct flame, perhaps more so. Then, the stove and pot work together to transfer the heat to what’s inside.

The most efficient pots are those that are wider than tall—but that’s not the design most system stoves take. That’s because of the need to pack smarter and lighter in the backcountry, and why the most efficient pots now have heat exchangers on the bottom — dramatically increasing the surface area of the pot that can be exposed to heat without increasing the size of the pot itself.

Additionally, engineers have to balance the effort to trap as much hot exhaust as possible while allowing for ambient air (secondary air) to pass over the burner in order to maintain combustion and allow for CO gases to escape. Primary air is the oxygen entrained by the “holes” in the mixer tube of your stove. This is the good stuff; the more primary air that can mix with the fuel, the better your flame.

It’s also about a lot more
Wind blows hot air away from a stove pot. A stiff wind can even blow out a flame completely, or prevent it from lighting. The best stoves use a wind protection screen that still allows enough oxygen to reach the flame, so it doesn’t suffocate itself. Some wind screens are clunky and inefficient (Jetboil’s Group Cooking System); others are integrated seamlessly with the pot (Jetboil’s SOL Ti). We test stoves in 10-20 mph wind to ensure there is not a dramatic loss of efficiency or performance in real mountain conditions.

Packability is important—the more compact the stove is, the less pack space you’ll need. All system stoves pack together nicely, but some are more simple and have fewer parts to get lost or damaged (MSR Reactor) than others (Primus EtaExpress).

Cold weather performance is important. Pressure regulators boost a stove’s ability to burn fuel in really cold conditions, but they are not a significant advantage in mild conditions.

Bottom line
When shopping for a canister stove, there are few reasons not to buy one with a heat exchanger system. These stoves are more efficient with fuel, perform better in wind and average consistent boil times.

There are exceptions for those who need to interchange lots of pots—those who are actually cooking food, as opposed to simply boiling water for tea and rehydrating food.

But if you’re usually doing weekend trips for two—with coffee and bagged meals that require only a couple of cups per boil—you can pack just one 4 oz canister of isobutane/propane  with any of the market leading heat exchanger stoves, like the Jetboil SOL TI, Primus EtaExpress or MSR Reactor. This is the smallest fuel canister you’ll find on your outfitter’s shelf. The propane additive will give you a slight performance edge should the weather turn cold.

Our tests
We test stoves head to head in the field on a range of performance metrics—not just boil time. For a complete rundown of our backcountry stove test results, go here.