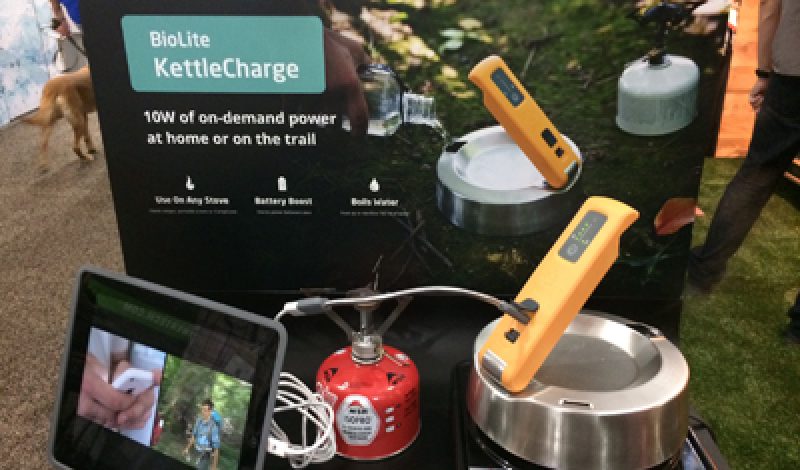 Four days of scouring the Outdoor Retailer trade show turned up some exciting and unique outdoor products. Here are the highlights for the Camp Kitchen.

The king of clever stuff for social camping—like folding fire pits and titanium Saki growlers—Snow Peak is introducing two new group-cooking stoves for backpackers. Unlike anything else on the market, the BiPod connects burner and fuel canister by an elevated, rigid mixer tube. Supporting the burner on the other end are two telescoping legs that fold for packing. The BiPod is a stove meant for moderate weather and more than two diners. Meanwhile, the equally inventive GeoSheild can be taken into the woods under more questionable conditions because the canister can be inverted to provide liquid fuel to the burner. The minimalist stove becomes complete only when connected to its windscreen, which folds neatly via a slick wire tension system. The windscreen can be flipped to position the stove lower when more wind protection is needed.’ 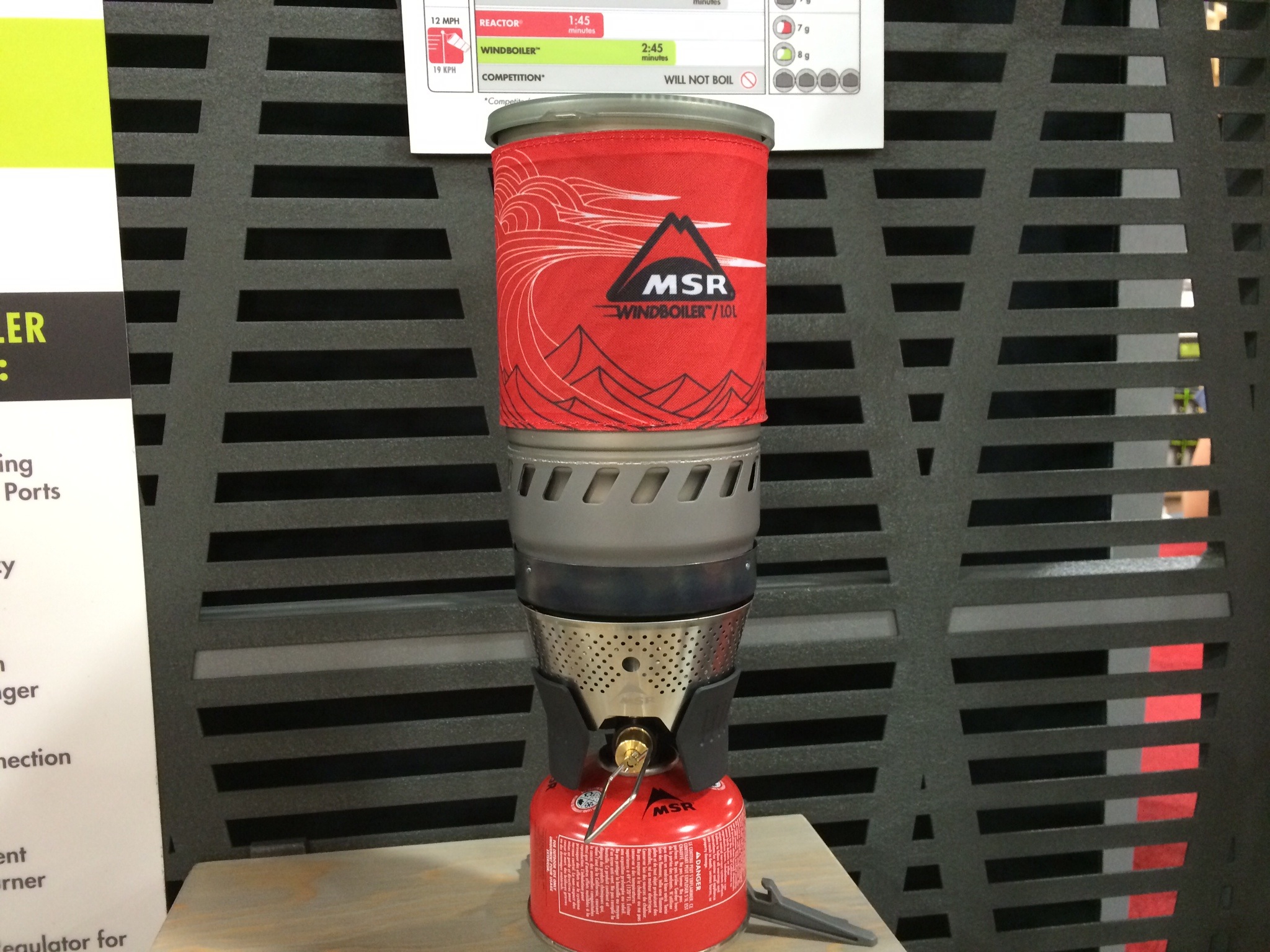 The MSR Reactor has a new friendlier, flamboyant sibling. The MSR WindBoiler uses the same all-primary-air technology but targets hikers who want to do more than just melt snow or tenderize a square of Ramen before the summit push. The regulated radiant heat capture and wind performance are similar but unlike the Reactor, the WindBoiler’s heat exchanger fins are set in a “spiral” to create more surface area by which to conduct heat into the pot; and it has a much larger control valve to leverage its ability to reach a delicate level of simmer. The pot lid fits nicely on the included cup and the system assembles and separates easily with connection points around the entire base of the pot instead of just in one or two places. Expected WindBoiler accessories include larger pots, a pan, hanging kit, and coffee press. 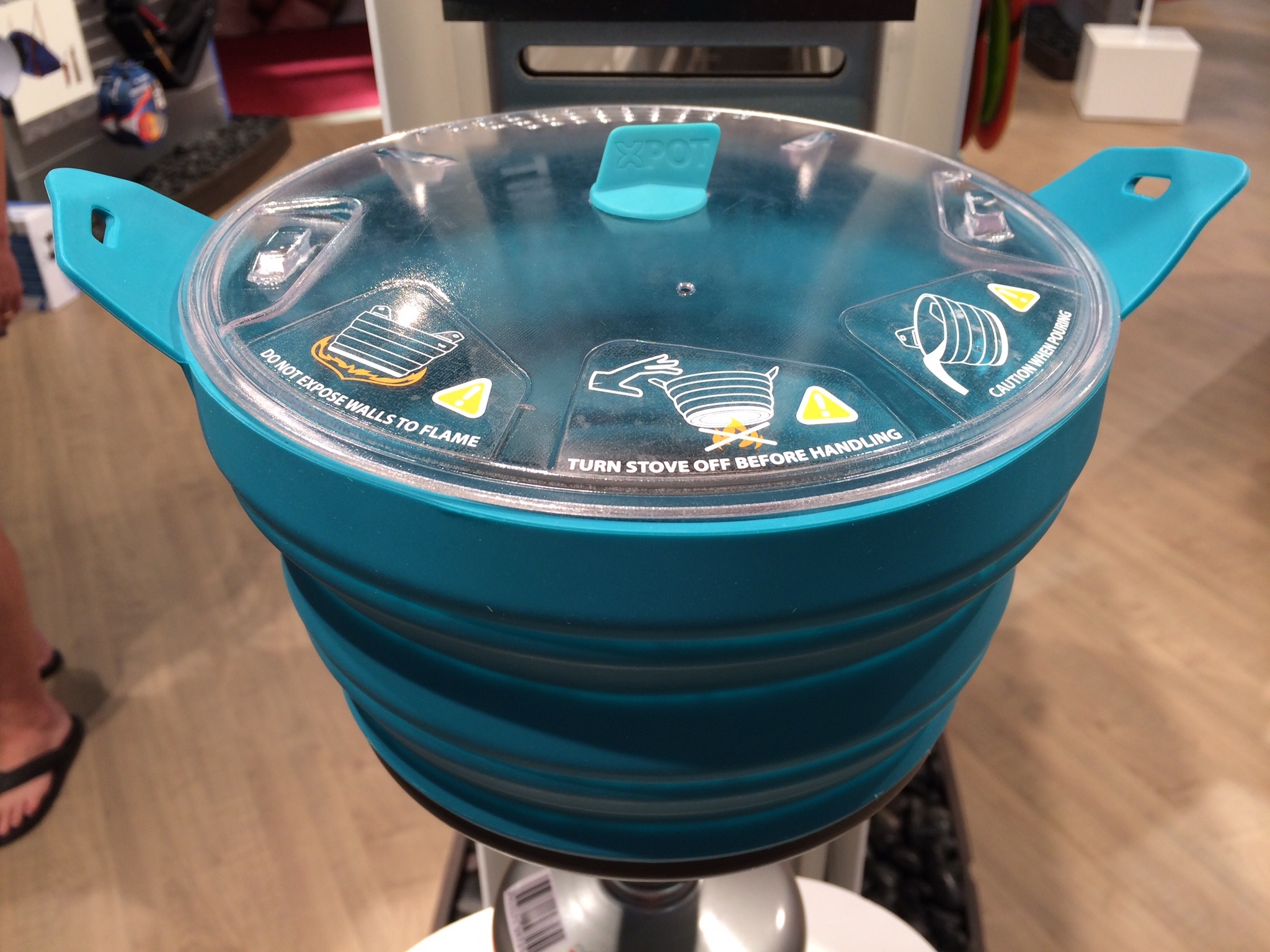 Sea to Summit continues to engineer sleek, dependable products, like the new X Pot. Taking their popular and proven collapsible rubber bowls to the next level, the X Pot adheres a hard anodized aluminum base to a 2.5 liter X Bowl, offering one of the most creative and packable cook systems on the shelf. So yes, while it may be hard to accept during initial examination, you can place the X Pot on a stove to boil water, cook penne, and melt snow. Large, grippy rubber tabs allow for safe handling post-boil and the hard plastic lid includes a strainer and method for locking it into place when pouring. When dinner is over, flatten and pack it. And if you need something to hold what the X Pot cooks up, Sea to Summit X Bowls and X Cups can be compressed under the lid to complete a very compact, lightweight cookset. 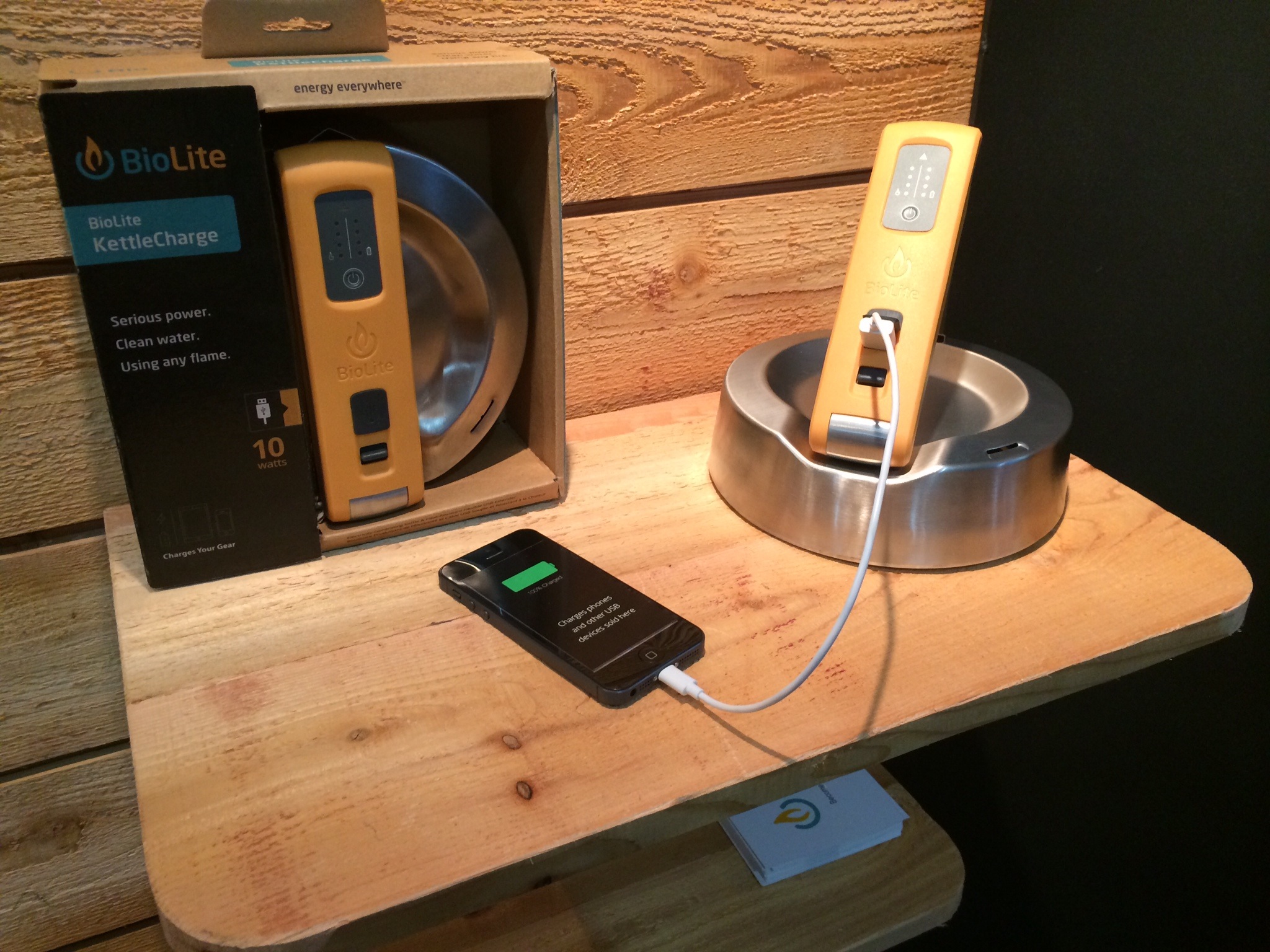 Fans of BioLite’s energy-everywhere cookers will be amped when the KettleCharge drops this fall, earlier than most of what’s revealed at Outdoor Retailer. The flat, stainless steel kettle uses the process of boiling up to 750 ml of water to create 10 watts of go-juice, the most of any of their products and on par with wall outlets. It can also be used with any of the backcountry stoves you already own—or any other cooking surface, even the one in your home. The smart power handle does more than help you pour, it monitors heat levels and the resulting charge volume. While it’s heavy for a pot, the ounces are easily justified when you leave the solar panels or lithium-ion battery packs in your gear closet. Plus, the KettleCharge holds power, so when the GPS is straining come mid-afternoon, you can get it reconnected when it matters most. And then fire up some high tea. Available October, 2014. 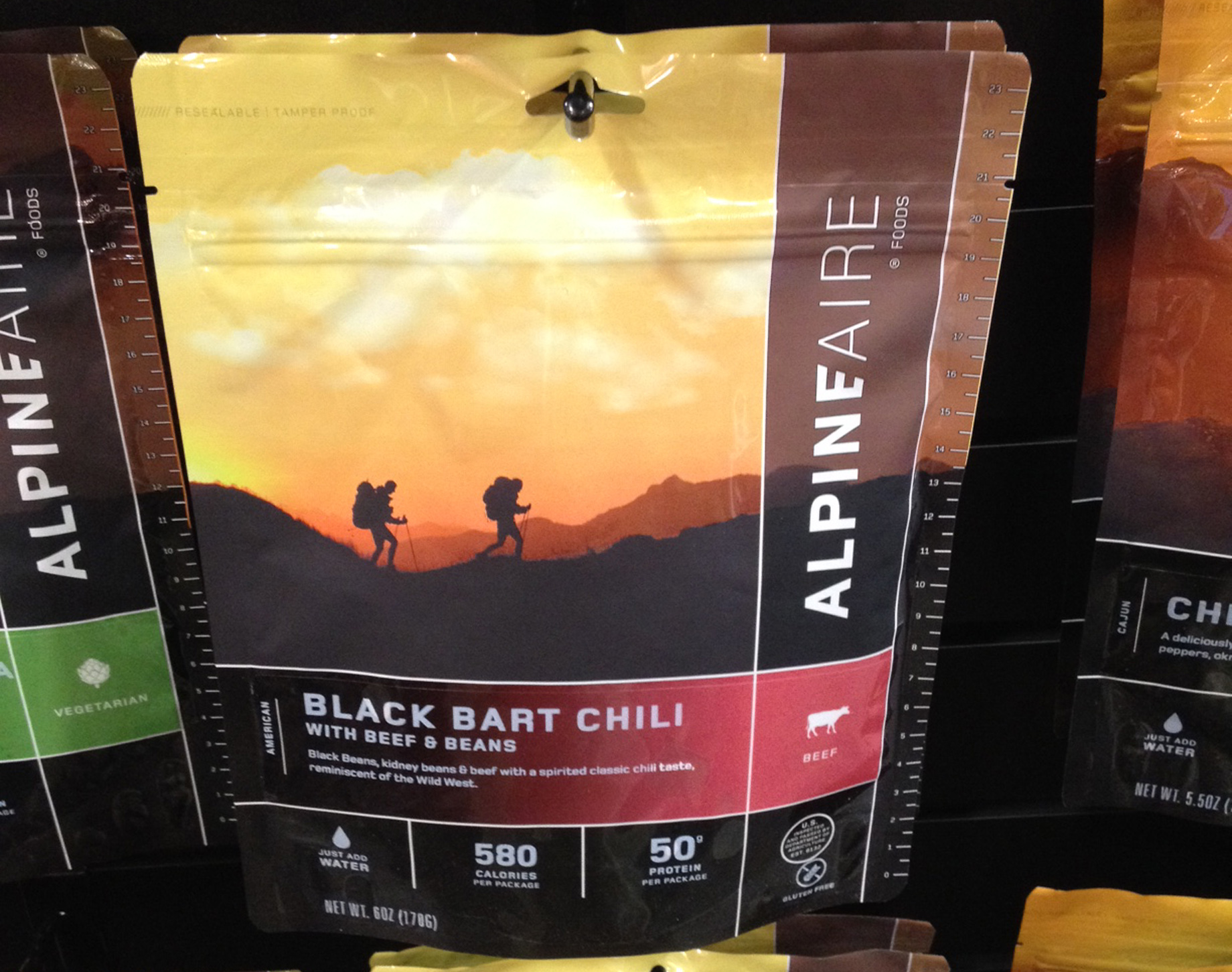 Just how good is this dehydrated chili? When AlpineAire secretly entered it in Texas chili cook-off, against ma and pa recipes that take days to cook, it won third place. Yup, it even tastes good without hiking 10 miles first. The 22-year-old recipe is packed with dehydrated goodness: diced beef, kidney beans, black beans, tomatoes, peppers, onions and jalapeno powder. It’s delicious and complex on its own but even better with a side of guacamole—and AlpineAire just happens to be releasing a backcountry version of the avocado-based side in spring 2015. Just add water to the powdered guac and mix. A little stirring produces a nice thick consistency that does a remarkable job of passing for the fresh stuff, especially when dolloped on the chili. It’s available in a personal serving size or a group size package. The guac will sell for $7 for a single serving, $10 for a group pack. The chili runs $7.50 per package.