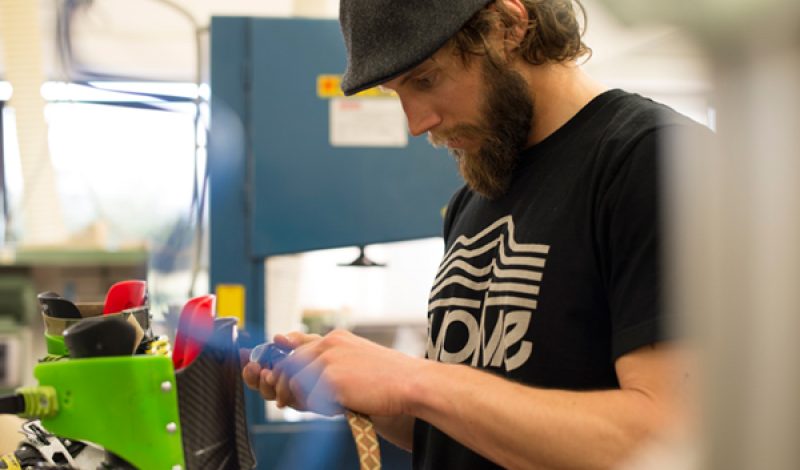 Backcountry skiers/product developers are hot in the world of off-piste skiing right now. Just weeks after Salomon signed Greg ‘2 mil’ Hill as an athlete and product consultant, Dynafit announced a long-term deal with professional skier Eric Hjorleifson which will make ‘Hoji’ a member of the International Team, as well as a lead consultant on the brand’s boots and bindings.

Hoji was instrumental in the development of the Vulcan/Mercury/ONE boot which launches this fall, and which has already won awards from Powder Magazine and Backcountry Magazine, and is already working with the Dynafit R&D crew on ideas for new bindings. Gear Institute caught up with him to talk about the deal—and any upcoming product scoops—just as he was boarding a plane to climb and ski in the Himalaya with the Dynafit Team.

Gear Institute: Eric, thanks for taking the time to talk to Gear Institute, and congratulations on the new deal with Dynafit. What is this relationship going to mean to backcountry skiers?

Hoji: I am optimistic that our relationship will help continue to progress the development of high performance backcountry ski equipment that is super-shreddable, as well as very efficient for climbing, allowing skiers to do more then ever before.

GI: Five years ago, a backcountry skier getting a deal with an equipment manufacturer wouldn’t even generate a headline. But your contract, and Greg Hill’s new contract with Salomon, are generating some serious buzz with the mainstream ski scene. What’s changed—where is all the energy coming from?

Hoji: More and more people are realizing the potential of backcountry skiing. That has shifted the skier’s focus on what they want to accomplish through the sport.

GI: Why does it feel like in backcountry skiing in particular, athletes are so integral to equipment design?

Hoji: I think athletes definitely push gear to the highest level of performance. They also spend as much or more time using the gear than just about anyone else. Backcountry ski gear must function well and be efficient. It is your lifeline, literally.

GI: You were key to developing a pretty burly boot in the new Vulcan. And Dynafit bindings have an impeccable reputation. Where does the focus go next—what’s most in need of change?

Hoji: I feel that part of my role with Dynafit is to help give them insight to the needs and demands of the North American skier. Dynafit’s perspective has primarily been focused on uphill performance—their gear is proof of that. The needed change will be combining Dynafit’s touring expertise with my freeriding experience.

GI: Any tips for our readers on how customize/modify their own boots for a killer season?

Hoji: Not an easy task, although I’ve seen several people with heavily modified Hoji inspired Titans this season. Probably the best place to start is getting a good footbed and custom liner. These can really make a difference.

GI: And we heard you are headed for the Himalaya with Team Dynafit on Friday (today). What are you guys going to be up to?

Hoji: I was invited on the warm-up acclimatization stage of Dynafit’s Himalaya trip. We are going to attempt to climb and ski Mera peak in Nepal. I am very excited and a bit intimidated… I have not been to high altitudes yet so we will see how it goes. It should be a great experience.

GI: What other big plans do you have for this season?

Hoji: Nothing super solid yet, things will really start to aline once I am back. I am putting on the GAH freeride touring camps again this December, anyone interested in early season pow shedding?